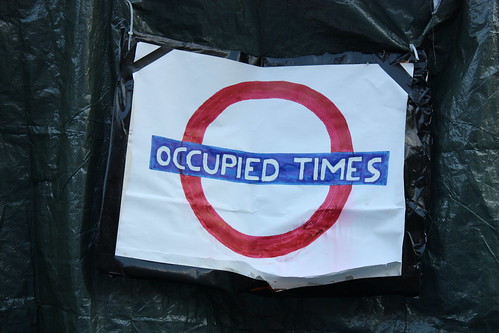 I visited Occupy London on an unseasonably warm and sunny day in late October. In a paradox that is no doubt indicative of who I am, I stopped off at St. Paul’s Cathedral, where the Occupy protesters were gathered, before heading off to Spitalfields (the famed shopping district). 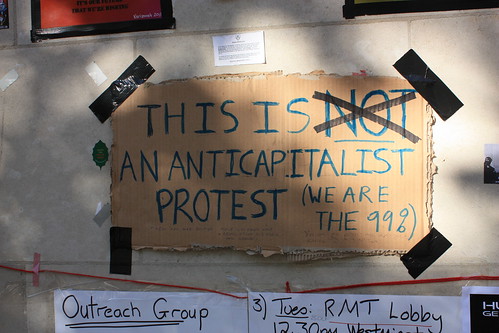 It seemed wise not to advertise that I was going shopping right after.

The air was light and jovial – people were milling about and talking. I meandered through, snapping photos, as did a number of other people, but felt too shy to actually engage in conversation with anyone. Ask me to talk about the weather, and I’ll happy oblige. Ask me to talk politics, and I’ll suddenly get timid, and start talking about the weather. Though I did have this exchange with a drunk Russian man:

Him: THIS IS EDEN.

Me: (sincerely) That’s a nice thought.

And I spoke to a confused German couple, who wanted to know if St. Paul’s was closed, and for how long (Yes, I told them. Though the protesters are still there, it seems to be open again.) 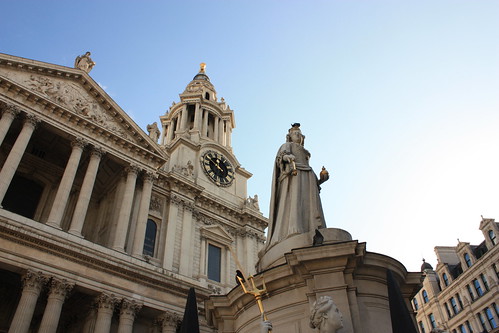 Still, it's pretty from the outside.

The only other person I chatted with was one of the police officers on duty. He explained to me that they were just there to keep the peace, and make sure no one did anything illegal. He and his colleagues calmly stood around, occasionally posing for photos with tourists. 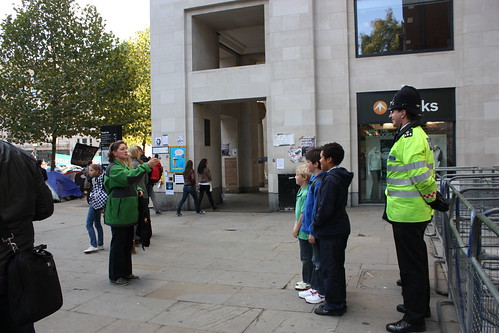 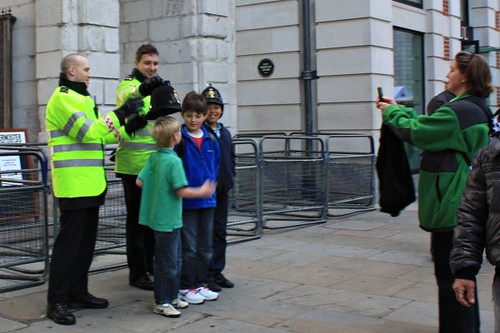 They were letting the kids try on their hats. It was quite sweet.

They seemed incredibly gracious, and all the interactions I saw between them and the protesters were quite calm and respectful. 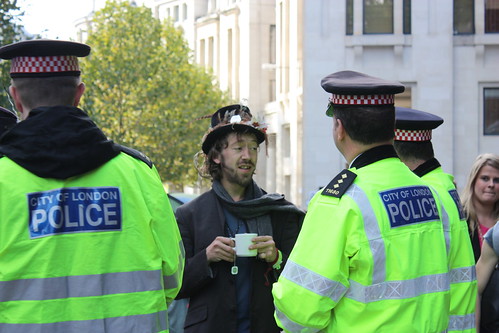 Just having a cup of tea and discussing the political climate.

This was all nearly two months ago. It sounds as though the mood has changed somewhat – the protesters have since been served with eviction papers, and unless they appeal, they will be required to leave by the end of the month. But when I was there, it was, really like a walk in the park. Since shyness and a tendency to talk about the chance of rain compromised whatever traces of journalistic integrity I possess, I have only photos, and little else to share. But I’d like to think they tell enough of a story on their own. 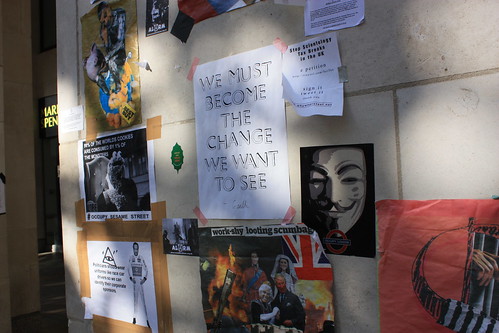 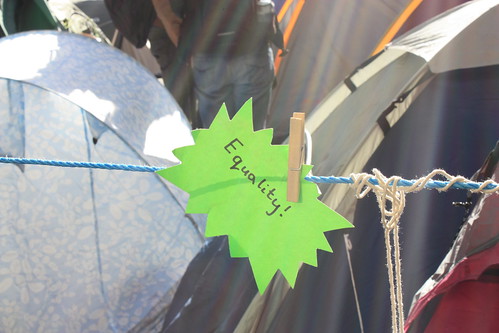 If we can write it on a neon green piece of paper and pin it to a clothesline, we can achieve it! 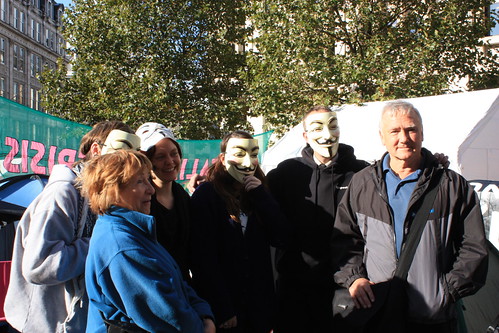 These gentlemen kept yelling, "We are Anonymous!" I wanted to shout back, "No, you really aren't." 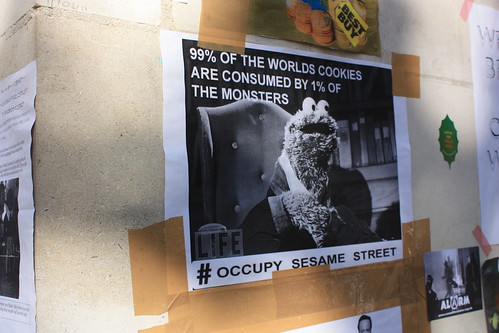 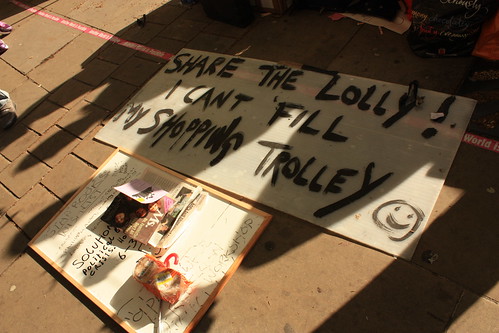 There were tents everywhere. Some had specific functions (a first aid tent, a mess hall, a place of worship) but most were simply housing for the activists who now inhabited the square. 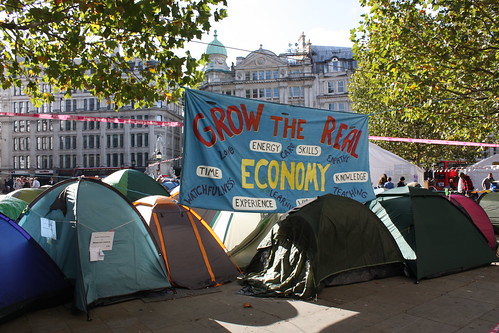 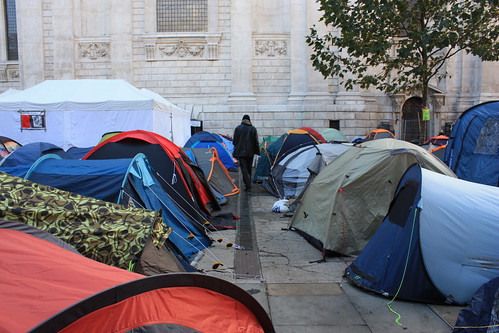 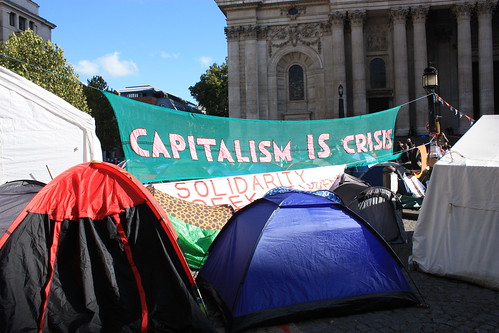 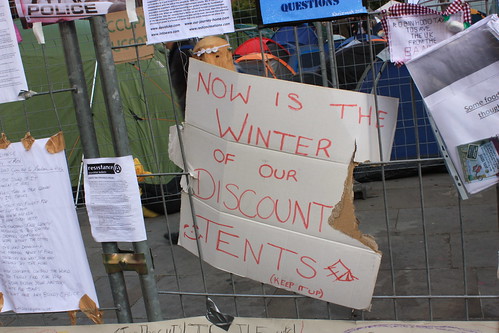 I regretted not talking to more folks, but really, there are others who are far better interviewers than I. Notice how, unlike me, they approach people with microphones, instead of half-eaten ice cream cones. 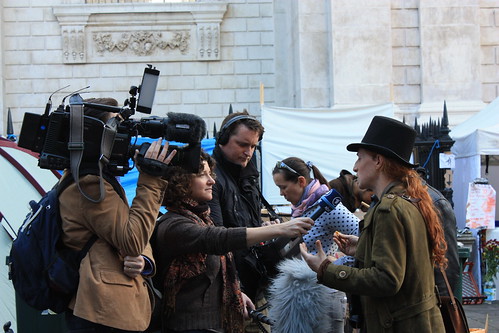 Besides, I’m not sure what more could be said about this scene. It’s simply magical: 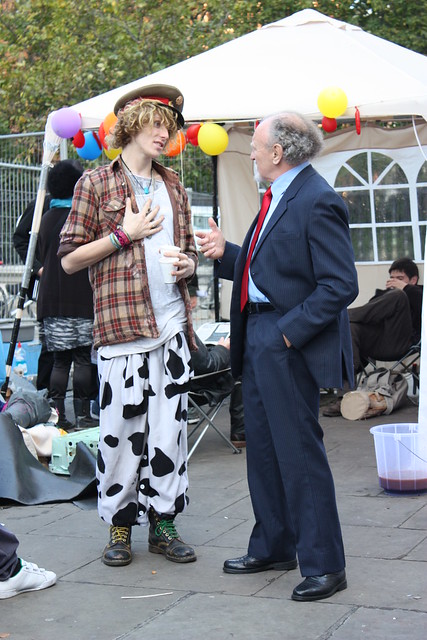 These two were talking the whole time I was there. They seemed to get on well.

And yes, the gentleman at left is wearing the lower-half of a cow costume.

Maybe Occupy London will prove to be fruitless. Maybe the protesters will get evicted, and will all have simply been a huge waste of everyone’s time and money. But I’d like to think that if those two gentlemen found common ground, then it wasn’t all for naught. And maybe that drunk Russian wasn’t so off-base after all.