There are plenty of things in life that are beyond my understanding. The entire field of Physics, for one. The enduring appeal of Two and a Half Men, for another. Grooming your dog to look like another animal. The fact that Snooki published a NY Times best seller (sweet Lord in heaven, how? I DO NOT UNDERSTAND). But perhaps the biggest mystery that I’ve encountered thus far is this: How can a city as advanced as London not understand the concept of shower curtains?

I’m constantly amazed by how efficient and logical things are across the pond. Like how, in the London subway, everyone stands on one side of the escalators and the people who want to race up or down do so on the other side. There is quite literally a passing lane on the escalator. This is in stark contrast to say, how we ride escalators here in America: we cram on as though it’s the last lifeboat leaving a sinking ship, fumbling with seventeen or so shopping bags, two coats, and some small animal in a pet-carrying case (let’s go with a chinchilla) and then we stand, utterly motionless, until we reach the top or bottom of the escalator. We then throw ourselves onto terra firma, after which everyone stands around looking as though they’ve just survived a war because THE STAIRS WERE MOVING.

I’m not pointing fingers. I do it, too. Escalators are SCARY. Plus, why use your muscles when the machines will do the work for you? It makes no sense.

But that’s just one of the many miraculously efficient things that go on in London. The subway system, though a Victorian relic that should prove to be an unnavigatable maze for any directionally challenged American (hi!) is surprisingly easy to figure out. Everyone is very polite, no one ever cuts in line, and if you look the least bit lost, ten young men with delightful accents will magically appear and give you directions, all the while calling you “love”. It’s really glorious.

Really, there’s only one thing I’ve encountered in the entire capitol that doesn’t meet these same standards of efficiency and charm: the damn showers.

Take a look at the bathroom in the last hotel we stayed at in Bloomsbury. It was actually a lovely place – breakfast was plentiful, the staff was helpful, and our room was bigger than a broom closet. But the shower looks like it was designed by someone who’s never actually had to take one. In lieu of a shower curtain, they have a pane of glass that covers half of the tub. Directly opposite this was a lovely little shelf where you could place all of your sundries that you wished to saturate with water. 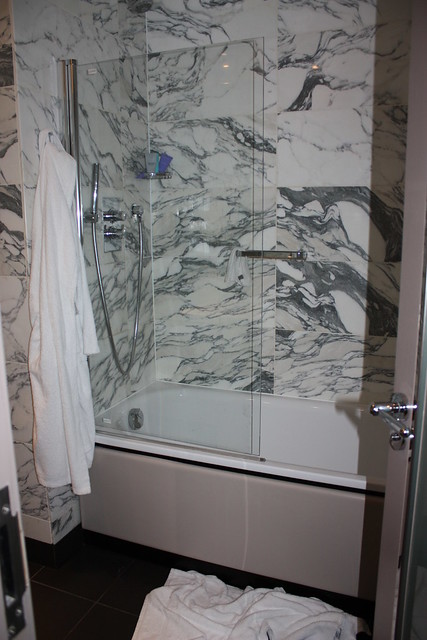 It was literally impossible to bathe without sending several dozen gallons of water on to the bathroom floor (note the copious quantities of towels everywhere). I took to crouching right up against the wall underneath the shower head, trying to not spray water everywhere, wondering how a place that makes GERMANY LOOK DISORGANIZED hasn’t figured out that water gets things wet.

It’s not like shower curtains are incredibly pricey or complex. They’re plastic taps that hang from the ceiling. DO YOU HERE ME, LONDON? YOU ARE FROM THE COUNTRY THAT INVENTED EATING CAKE IN THE MIDDLE OF THE DAY. DO YOU KNOW HOW BRILLIANT THAT IS? Seriously. This is child’s play by comparison.

I suppose I shouldn’t pick on the English exclusively for this. Other countries have missed the boat when it comes to shower curtains, too. I’ve been in hotels and hostels in Italy, Sweden, Norway, and Spain that have had similar arrangements. I once encountered a shower in Hungary that consisted of – I kid you not – a drain in the middle of the bathroom floor, and a hose. But for some reason, I expect a little more of the English. They’re so damn reasonable. Couldn’t they have figured out that water doesn’t stay where you ask it to?