I tend to miss things.

Street signs. Major themes in books and film (I watched Tinker, Tailor, Soldier, Spy and was woefully confused because I kept getting distracted by Benedict Cumberbatch’s hair). And often, when I travel, I tend to miss precisely what it was I set out to see on that day.

This past summer, when I visited Florida, my friend Giselle took me to the beach so I could see a rocket launch from Cape Canaveral. Not as grand as a shuttle launch, mind you, but still something pretty cool to see, especially if you didn’t grow up with it.

As we waited, we got a little bored and one of us really wanted a snack (sigh. FINE. IT WAS ME), so we wandered into a Starbucks. We got drinks and chatted, and then the kid behind the counter started flirting with Giselle and I politely suggested that she “tap that”. She protested that he was too young and I argued that this meant she could teach him a thing or two, plus he was employed and probably smelled of cappuccino.

(I still think she should have gone for it. I once dated a guy for two months because he had a Smiths poster on his wall and one time, he made me a nice steak. That was it.)

So I sat, quietly planning her and coffee boy’s wedding while sipping an iced tea, when Giselle suddenly stood up and said, “The launch!” 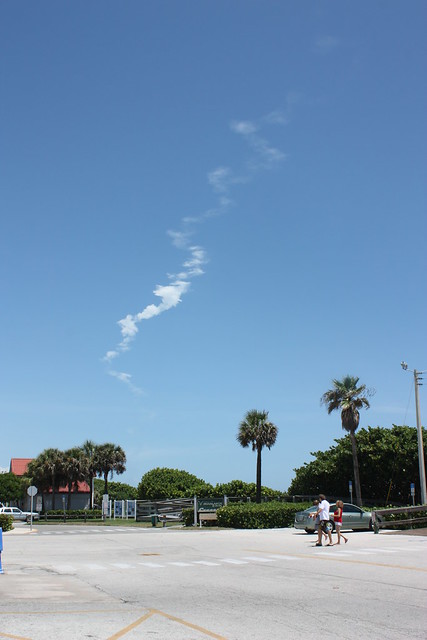 We ran outside just in time to see the exhaust plume fading in the blue sky. So I missed that, too. But I didn’t mind all that much, because I was having a nice time. Giselle didn’t seem to mind either, and the way I figured it, she had more to complain about: she had managed to miss both the launch and had to cut short her flirtation time with her future husband.

That’s the power of good company. When you miss something, it doesn’t leave you empty-handed: often times, you get a story out of it. And something to laugh about later.

It is why our failed outing to see the dancing fountain in Barcelona wasn’t a complete loss.

I remembered the Fuente Magica de Montjuic (“the magical fountain of Montjuic”) from a high school trip I took to Spain when I was 16. It was a technicolor marvel: the water was lit with an array of hues that left me craving Starburst candy, and the fountain bubbled and shot streams into the air in synch to music.

I couldn’t quite remember what time the show started, but I figured it would be around midnight, because the Spaniards have no problem doing all sorts of things while the rest of the world is fast asleep. If they were a more militaristic culture, I’d be alarmed that they were planning something. But while we’re vulnerably unconscious, they’re usually dancing to awful club music or eating toasts with cured ham on top, sipping wine, and yelling at each other. Clearly, they are a country with their priorities straight.

The four of us hailed a cab and told the driver to take us to Montjuic. We later discussed it and found that we all, at one point or another over the course of our brief car ride, thought we were going to die in that vehicle.

Rand suspected the driver was high. Joanna merely stared at the rest of us and raised her eyebrows from time to time, her subtle way of saying, “Um … guys?” I looked out the front window and stifled a giggle, which is apparently what I do when confronted with my own mortality. And Kenny, who sat in the front seat, held on to whatever he could until his knuckles were white.

Later, on terra firma, Kenny screamed, “HE WAS GOING TO KILL US. WE ALMOST DIED,” and we all laughed, because Kenny’s rage is hilarious and charming.

We made it to Montjuic in record time, which was pointless, because the show was long over. The fountains were dark and quiet, and except for a gaggle of drunk girls in mini skirts running to catch the cab we gratefully vacated, we were alone.

“Shit,” I said, looking at the darkened plaza before us. I began apologizing profusely, but Rand and Joanna and Kenny ran ahead, undeterred.

“It’s really awesome,” I said, trying in vain to explain how the fountain lit up. I remembered being 16 and enchanted and thinking that the world was bigger that I knew it to be. But my cohorts didn’t seem all that interested in how great the fountain had been an hour before. Nor were they that disappointed, really.

They seemed content to just run around and take a bunch of photos. So I perched my camera on my bag, set the timer, and obliged … 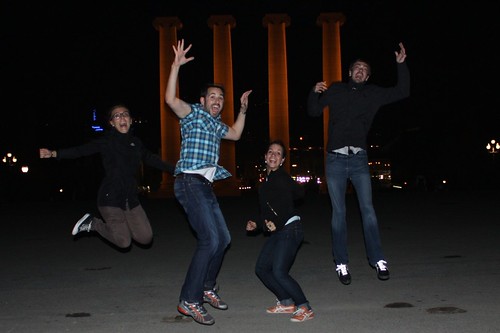 It is, for the record, remarkably difficult to capture everyone in the air at the same time while the camera is on auto-timer. 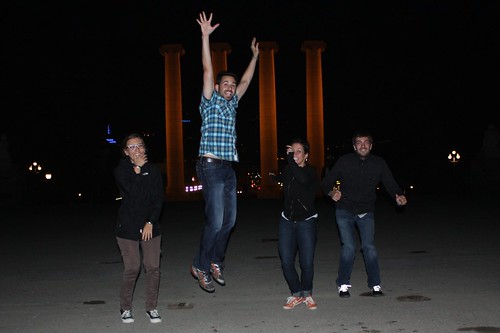 Then they ran up to the now-quiet fountain, and barely noticed the cautionary sign nearby. 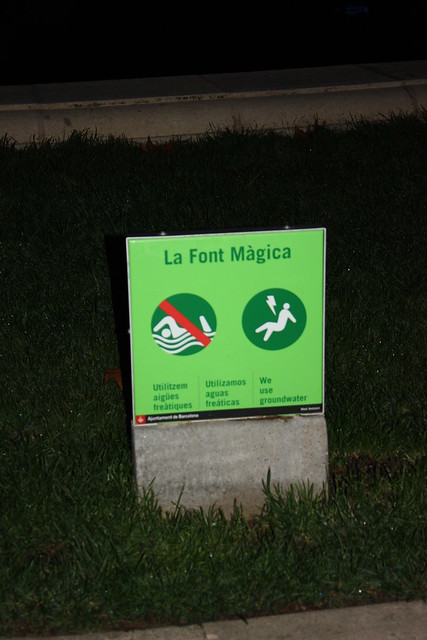 In all fairness, I'm not sure what this is supposed to be warning us of. Groundwater?

It was something about how you shouldn’t roll around in the grass because you’ll get electrocuted or something. To be honest, it wasn’t very clear (how does groundwater lead to electrocution? Can someone please explain?)

But at this point, we feared nothing. After all, we’d already cheated death once on the ride over. So this happened: 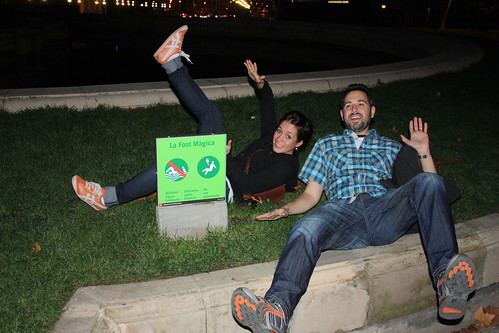 Don’t worry: they were fine. Fate doesn’t kill beautiful people in their prime (with a few notable exceptions).

We were the only ones there at that late hour – running and shouting and goofing off against a quiet backdrop where a fantastic fountain show should have been. We were seemingly alone, until a booming, disembodied voice shook through the plaza.

I don’t know where it came from – the same PA system that plays music for the water show, perhaps – but it was deep and ominous, and had you told me it was the voice of god, I’d have almost believed you.

It leveled out a harsh warning, and I looked at everyone wide-eyed. I had temporarily forgotten no one but I spoke Spanish.

They stared at me, confused. In reply, I looked at them calmly, before screaming, “HAUL ASS!” and tearing down the stairs. For the record, this is a great way to freak out your travel buddies. Don’t translate, just start running. (Not recommended for family trips or when vacationing with the elderly,)

Seeing the looks on their faces, I laughed, stopped, and explained that the voice had announced that the park was closed, and we were trespassing. Amused by our own lawlessness, we continued our screaming run down the stairs, to find another cab, and to laugh in the face of death again.

In the car on the way back to the hotel, we chatted loudly about our previous stoned driver, the empty park, and disembodied voice that sent us running into the night. Our cabbie kept glancing at us in the rearview mirror, trying to decipher if we were completely nuts.

I tried, in my broken Spanish, to explain to him what had happened. How we had tried to see the show, how we had run around in the shadows, how we had, as Kenny was so keen on reminding us, almost died.

But it was pointless to try to describe it to the cab driver. It was one of those things, really, that he’d have to miss for himself.