Sometime around yesterday afternoon, I realized something: I was sick.

More than a few of you are likely thinking, “Well, obviously. It’s not normal for a grown woman to constantly obsess about baked goods and Jeff Goldblum. At least she finally admitted it. Now she can get help.”

And to those folks I laugh and say, No, no, no! I’m not talking mental sickness (I will write JEFF GOLDBLUM 4-EVER on the cover of my notebooks until the day I die, even though it’s been years since I’ve actually needed a notebook for anything.). No, I mean I’m actually feeling ill. Sick. Able to breathe through only one nostril, which keeps switching and I only notice it after the fact.

I blame my husband. He seems to be an incubator for all sorts of illnesses, yet never shows even a hint of a symptom.

“Everyone in the office is sick,” he’ll say, and within a matter of hours, I will be afflicted despite NOT HAVING SET FOOT IN HIS OFFICE IN WEEKS. You’d think that he’d at least have the decency to feel rotten himself after giving me consumption, but no. NO. He just walks around with his rosy cheeks, haughtily breathing through both nostrils without a care in the world.

“I SEE YOU EXHALING OVER THERE, YOU SHOW-OFF.” 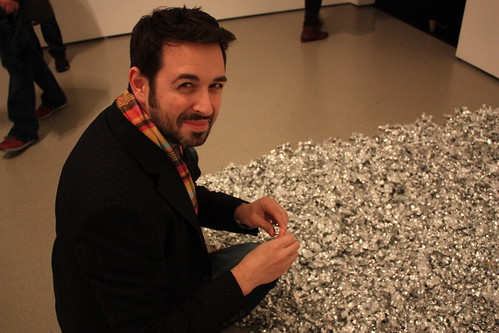 Here he is eating candy off the floor of a museum and suffering ZERO consequences (note: it was part of an interactive exhibit, but STILL).

I would be cursing him even more had he not arrived home from work with a slice of lemon pie for me. (A slice which I just realized I probably can’t taste because of aforementioned clogged nostrils. That’s it. I’m so wiping my nose on a voodoo doll of him.)

I’m trying to keep in mind that it’s not as bad as it could be. If I’m going to be sick, at least it’s while I’m at home, where I have lots of soup and tea and countless episodes of The Office to cringe through. Because I’ve been sick on the road, and let me tell you: it sucks. Profoundly. I’ve talked about things you can do to make it better, ways to explore a city while quietly hacking up a lung.

But I neglected to mention one thing that I always travel with: my mobile medicine cabinet.

It’s nothing particularly fancy. It’s an old plastic cosmetics bag that I have constantly stocked with all manner of things. Before I go anywhere, I throw it into my suitcase along with my neti-pot, and I’m ready for any eventuality from sore throats to bug bites. And so, as I sit here too congested to bother telling you about the British Museum or Antonio Gaudi (soon, I promise), I’d like to share with you what’s inside my little cosmetic bag of medical tricks.

But let me say, before I wax poetically about all the over-the-counter goodies we get in our country, that I do think we tend to over-medicate a lot. Antibiotics should not be taken hastily. Pain meds shouldn’t be downed like Skittles (also, a lot of medications have candy coatings nowadays, which is just MESSED UP).

I generally try to fight most things off with a mix of fluids, rest, and whining (it has an eventual, though not immediate, 100% success rate). But there is something incredibly comforting about having this stuff with me, just in case (I doubt it needs to be said, but still – I’m in no way a professional, and this is not medical advice. Obviously, you should talk to a doctor before taking any sort of medication, over-the-counter or otherwise):

I know it’s a long list, but all this stuff is pretty compact. I’ve got it ready to go, so I can just pop it in my bag and be off. I can’t tell you how many times it’s come in handy for me and Rand. Right now I’m not going anywhere but the couch, but I still might take my mobile medicine cabinet with me. Just in case.