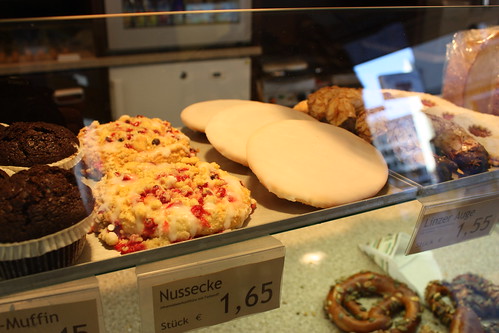 A black and white cookie that happens to be all white.

I am constantly thinking that I know best. My viewpoint can be so myopic that I have to make a concerted, agonizing effort to see the other side of things. I approve comments on the blog from people with whom I disagree. I travel around, meeting people who see things – and live life – far differently than I do.

And I love a man who is the polar opposite of me: Calm. Reasonable. Level-headed. Sometimes, I even listen to him.

Most of the time, though, I’m just quietly nodding and waiting for the right opportunity to kiss him. (Don’t tell him I said that.)

These things help to bring a bit of balance to my one-sided life. This is not to say I don’t resist. That I don’t occasionally hate “seeing things from someone else’s point of view” (as Rand is constantly encouraging me to do). But I acknowledge that I need it. I need harmony. I need ying and yang. Ego and id. Elinor and Marianne.

It’s why I keep eating black and white cookies.

Have you ever had a black and white? No? That’s perfectly fine. You aren’t missing much. Most of them are dreadful. them consist of a dry, crumbly cake with the texture of an over-used sponge. The frosting on top – half vanilla, half chocolate, is often weirdly chewy and sticks to the roof of your mouth. Black and whites are one of the few sweets I am continually tossing in the trash. But I keep buying them. Again and again.

If I find the right one, I’m sure an epiphany will follow. Of course, that’s how I feel about most sweets.

I spotted it through a window while walking through downtown Munich, and was instantly intrigued. Because this was no ordinary black and white. Nope. It was a white and white.

I’ve traditionally always loved vanilla over chocolate. I know, I know. This is sacrilege, right? But here’s the thing: chocolate gives me a headache. At least, when I eat it in the quantities that I would like (a brownie-pan full), it does. It sends a dull throbbing across my eyebrows and temples, and I’ve actually found myself (on … let’s just say numerous occasions) icing my head with one hand while shoveling chocolate into my mouth with the other.

Wow. It feels really good to admit that.

And let’s not ignore the sheer messiness of the stuff. I once ate a chocolate enrobed ice cream bar – you know, the ones where the chocolate shell breaks off in all directions like shrapnel? – while wearing a low cut shirt. Later than night, while I was getting undressed and ready for bed, Rand paused and stared at my abdomen.

I didn’t. I inspected my skin and promptly licked the chocolate faux-mole right off (the mechanics of how precisely I did so now escape me).

Given such a checkered history with chocolate, you can see why the idea of an entirely white black and white intrigued me. But I should have known better. There was no balance here. No harmony. 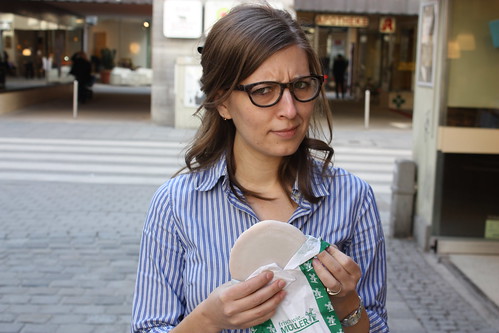 The doubt that can be seen in my eyes is betrayed by the smile I get whenever I'm about to eat dessert.

I asked the woman at the store what the cookie was called.

“An Amerikaner,” she said.

Yes, the jokes, they come easily, don’t they? I bit my tongue, though. And then I bit the cookie. 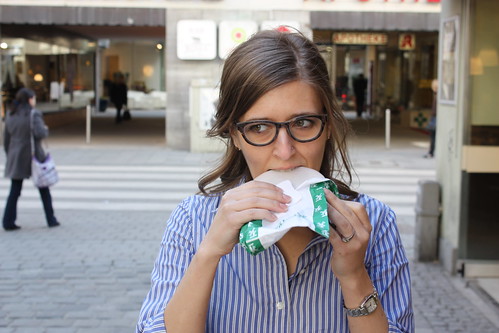 I was more animal than human.

I took another bite. And another.

“Awful,” I mumbled, my mouth full. I was gasping for air. This thing was terrible and I couldn’t stop shoving it down my gullet. WHAT IN DEAR GOD WAS HAPPENING TO ME? There was no control. No balance. Nothing.

About halfway through its mediocrity, I stopped abruptly, tracing my finger across the jagged edge left by my bite marks. This was where the chocolate should have begun.

But there was no chocolate. Only vanilla. Real black and whites might not taste good, but at least they aren’t racist. This was not a cookie. This was an abomination. Why had I even purchased it?

IT WAS A TESTAMENT TO GENOCIDE.

I threw it into the next trash can I passed.

“Do you think I’m racist?” I asked Rand, hesitantly as we walked away.

“Well, we all have our biases. I mean, everyone is a little bit racist so … wait … is this about the cookie?”

He sighed, and placed a few euros into my hand, as I am always short of cash.

“Go find yourself something else,” he said, kissing my forehead. Something that would bring harmony to my life. 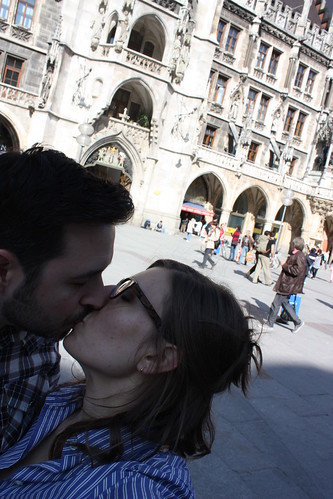