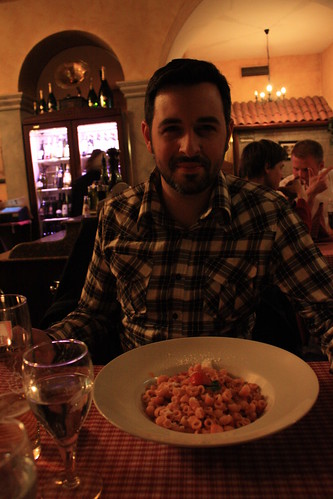 A friend of mine once told me about the time she chaperoned a group of teenagers on a trip to China. After arriving in Beijing, the kids, once so excited for their trip, had a bit of a breakdown. Many of them had never been outside of the U.S. Most of them hadn’t been too far from their hometown. As a result, every last one of them had a minor implosion due to culture shock.

My friend, in response, led them to a McDonald’s.

When she told me this, I was aghast.

“You did what?” I said, thinking of one of my cardinal rules of travel: never eat at fast food restaurants.

She shrugged, unmoved by my disdain. “Everything was unfamiliar to them, and they needed a bit of comfort.”

I shook my head, and told her she should have made them toughen up. Wasn’t the whole point of traveling the world to experience new things? To be out of your comfort zone? I argued that she did them a disservice.

I can be such an ass.

I can also – occasionally – admit when I am wrong. Sometimes, a bit of comfort is good, especially when you are far from home. And sometimes, that comfort comes in the form of food.

I realized that when Rand and I were in Munich last week, and I was feeling out of sorts. My grandmother would have said that I had “la luna storta” – literally, it means your moon is hanging crooked.  In other words, I was in a grumpy mood. I was too sensitive. I was out of my element and my comfort zone.

This happens to me on occasion when we travel. Don’t worry – I’m not asking for sympathy because I don’t deserve an ounce of it. Not at all. My life glorious. It is full of travel and art and sweets and wonderful things.

I am absurdly spoiled, and we usually travel to places where I can get by on English, or Italian, or my minimal Spanish. I rarely have to deal with language barriers or frustrations or anything like that. Which is good, because I don’t handle it well when I feel like I’m not in control.

Like that day in Munich, when I clearly had my cranky pants on. When dinner time came around, after Rand and I had a fight that I instigated about something-that-wasn’t-even-important-at-the-time-much-less-now, Rand suggested we head to an Italian restaurant by our hotel.

Why not just go to McDonald’s in Beijing?

“It’s supposed to be good,” Rand said. “Plus, you can speak Italian. I think it will make you feel better.”

I didn’t argue, following him down the cobblestone walk from the hotel to the restaurant.

Inside, it was dimly lit and bustling, as diners chatted in a variety of languages.

A gentleman in a white shirt and red apron greeted us as we walked in.

“Good evening,” I replied, without skipping a beat. “There are two of us. We’d like to sit by a window.”

He led us to a wooden table draped with a checkered red and white tablecloth, and brought us menus in German and Italian.

“I can translate for you,” I said to Rand, smiling.

“I think I’ll be okay,” he said, laughing. Of course. Spaghetti is spaghetti.

I had an arugula and parmesan salad to start. It was exactly as I had expected it to be. Simple. Predictable. Peppery and acidic. 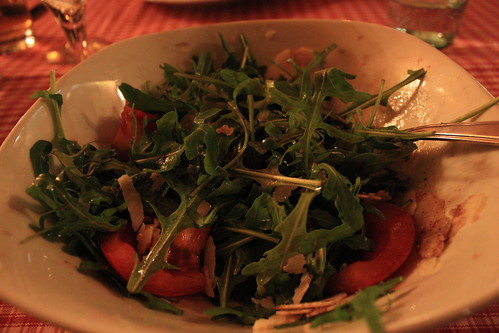 For my entree, I got aglio e olio. It’s a ridiculously simple dish: pasta with oil and garlic (and sometimes, as was the case here, a few chilis). My grandmother would make it for when I was little and feeling finicky. I never prepare it at home, because I can’t justify a plate full of oil-soaked carbs. But it is a dish that is near and dear to me – so much so that Rand worked it into his wedding vows. He promised he’d always keep the house stocked with the ingredients to make it. Not hard to do, certainly. But it made me so happy when he said it, standing in a tuxedo in front of all our friends and family. 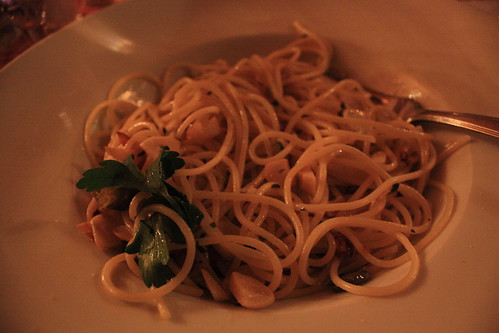 He understood the power this dish has on me. He knew it before we were married, and knew it that night when I sat in Munich, eating something distinctly non-German. Enjoying my version of a Happy Meal.

We left, not before saying a heartfelt “danke” to the waiter. And then I walked back out onto the streets of Munich, my moon no longer crooked. I felt ready for just about anything that came my way.

Yup. Ready for anything … except McDonald’s, of course.

Rand and I ate at Taverna Del Sud, near the English Gardens, northwest of downtown Munich. They serve good traditional Italian fare (pizzas, pastas, and the like) and the prices are incredibly reasonable (we both got entrees, split a starter, and had drinks for 30 Euros). I didn’t have dessert because I ate a cookie on the way to the restaurant (don’t judge me), but it looked delectable. Staff is polite and quite speedy. Guests ran the gamut: folks were having family dinners with their children, while others were on dates. Jeans are acceptable.

I don’t know if I’d go out of my way to eat here, but if it’s close by? Definitely.