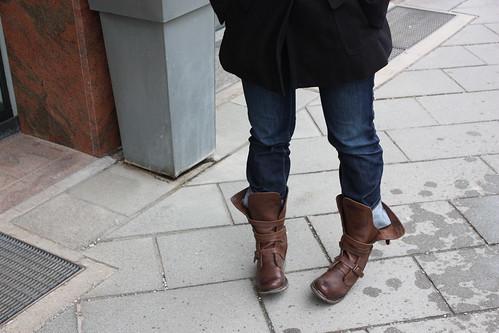 Who knew keeping your shoes on would be such a luxury?

I am not a gambler. Should there be any doubts of this, note that I was in Vegas for two whole days and the greatest risk I took in a casino was ordering a savory crepe (don’t do it. Cheese is no substitute for Nutella, and anyone who says otherwise is likely trying to sell you something. Probably cheese).

But the TSA has turned me into someone who takes chances, who rolls the dice again and again, because if I win, I get a bit of humanity back. How? Via the TSA’s new PreCheck program.

The TSA’s website doesn’t offer a ton of information about how their precheck system works. But here’s what I learned:

Based on all of this, it seems highly improbable that anyone would be selected. But if The Hitchhiker’s Guide to the Galaxy taught me anything (besides that I should always take a towel) it’s this: highly improbable is not the same as impossible.

And so, on our flight down to Vegas, flying Alaska and departing through SeaTac, the improbable happened, and we were selected. We were sent into a separate, shorter lane (the one folks get to use when they are frequent fliers or first class). Our IDs were checked against our tickets by an agent, and then we headed through security.

There was no line ahead of us – just a metal detector. And that’s when the TSA, for the first time in years, treated us like normal people. Here’s how:

So we tossed our bags on the conveyor belt, walked through the metal detector, stared at each other incredulously on the other side, and that was it. It took roughly 45 seconds, if that. It was like we’d died and gone to 1998. Traveling was suddenly easy. Security was a breeze. I no longer hated the TSA!

We managed to luck out again on our way back from Vegas. And this time, I was gambling big-time. I was wearing a dress.

Why is this significant? Because I am often selected for the full-body scanners. And every time I am, I opt out, and am subject to a pat-down. I was willfully walking into a situation where I might have to be patted down while in a dress. I wasn’t sure what was going to happen, but I wasn’t going to change.

I mean it’s a really pretty dress. It’s a white dress covered in green leaves, packs beautifully, and cost me $6 at the Goodwill. And according to that dress, I’m two sizes smaller than I actually am. Besides, I’ll admit: I was kind of curious. How were they going to pat me down on my legs? The procedure is that they run their hand up your leg until they meet “resistance” so … were they going to reach up the skirt of my dress?

That sounded mortifying, but better I have it done voluntarily so I can tell others about it, then have someone else get caught off guard. Nope. The dress was staying on. I’d suddenly become a gambler.

But it didn’t matter: we were selected for PreCheck, and breezed through security in Vegas.

Of course, it doesn’t always work so smoothly.

At Newark airport this past Sunday, we were again sent through a quicker line for frequent fliers/first class passengers. I was hopeful that I could keep my shoes on (and I wasn’t wearing a dress), but soon realized we were headed towards the regular queue. And nearly everyone was being sent through the full-body scanner. The line was quickly stacking up as the agents refused to send anyone through the metal detector.

Rand was selected for the full-body scan ahead of me. He opted out, and the agent began telling him – in impatient tones – how it wasn’t dangerous, etc. Rand held up his hand gently in objection and said, “I’m opting out. Thank you.” 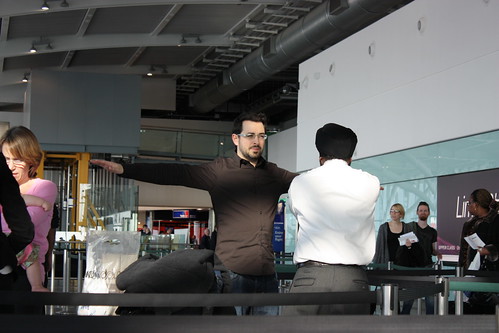 We have years of experience: Rand gets a pat-down in London, February 2010.

It’s ridiculously, really. I was no different that the woman in front of me, but because I’d demanded to be treated like her (to go through only the metal detector), I was subjected to more screening. The TSA punishes those who dissent. It’s creepy to think about.

It’s also disturbing to consider that, with the new TSA PreCheck, those who are eligible are usually the upper class. Think about it: if you travel a lot, you likely have the finances to do so. Most of the folks who are frequent fliers are also first class passengers (one of the perks of flying a lot) – so a strange dichotomy is created between the haves and have-nots. The three-child family who takes one trip every few years is sent struggling through security while the businessman who travels all the time breezes through.

If you fly first class, you are treated better, even by security. 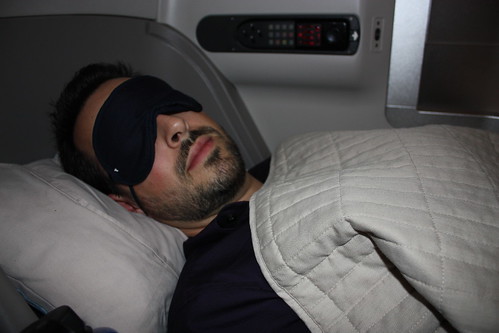 Don't fret: if we ever fly first class, it's usually by mistake.

We ended up making it through Newark fine. We are often patted down, so it was no big deal. But I’d seen what it had been like to be treated humanely by the TSA, and I was having trouble going back to how things were.

Is the TSA PreCheck worth it? Absolutely. There’s nothing to lose, really. If you don’t get selected, you’re treated like everyone else – a shoeless nobody getting their nether regions prodded by a stranger in latex gloves.

But if you do get picked for PreCheck? You get treated like a person by the TSA. Which, really, is like hitting the jackpot.