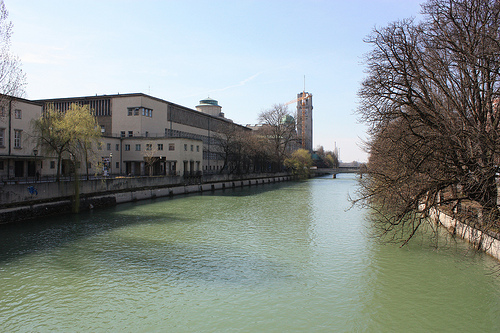 I am terrified that one day, I will be either 1.) abducted by aliens or 2.) frozen in some sort of cryogenic state and thawed out thousands of years in the future.

This is not the terrifying part. No. The terrifying part is when I am asked (by either aliens or mankind’s tentacle-y descendants) about the world in which I lived, and I have NOT A SINGLE ANSWER TO GIVE THEM.

I mean, I have no idea how things work. Like, not even remotely. I don’t really know where computers come from (elves, maybe?) or how they operate (wires have something to do with it, I think. And then you push electricity through the wires and – voila! – INTERNET.)

I know that paper comes from wood. (Please don’t ask me any follow up questions on that one.) And the first time I saw brussel sprouts still growing on a stalk, I may have wept a little, because it so rattled my understanding of things.

I would be of no use to aliens or to whatever creatures will appear on this earth after man’s reign is over. I cannot explain this world. But dude, the Deutsches Museum? It totally can. 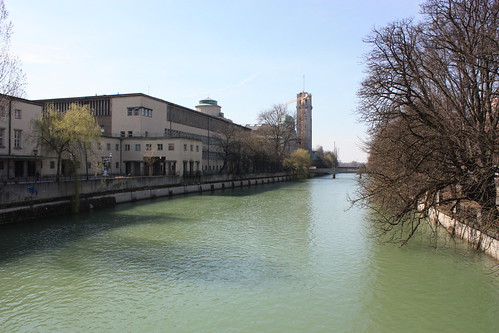 Note the entrance on the very far end. I approached nowhere NEAR it.

This is probably good, because it means that the people who work there can easily survive a zombie apocalypse by blowing up that bridge, and they’d have loads of useful tools and items with which to start a new civilization.

In fact, they’d have the museum’s entire collection – of more than 100,000 objects – at their disposal. The collection is not restricted to any range of topics, or any time period. It spans from Stone Age to present day; from mechanical looms to astronomy. And while that sounds rather awesome, as a visitor with the attention spat of gnat, it’s somewhat horrifying. I was actually relieved to see that large portions of the museum were closed for renovations.

After all, when reviewing one’s own ignorance, there’s a limit to how much a gal can take.

Here’s a quick rundown of some of the exhibits I visited, the limited knowledge I had beforehand, and what I learned while at the museum.

Everything I know about boats can be summed up thusly: like poop and rubber duckies, they float.

The most notable piece in the exhibit is The Maria, an enormous deep-sea fishing boat. She sailed from 1880 to 1950, before coming to rest at the Museum. 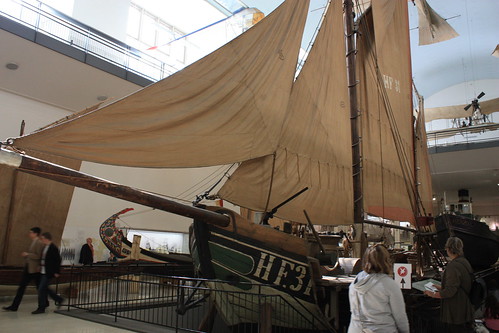 Her side has been cut open so you can see what life was like below deck. 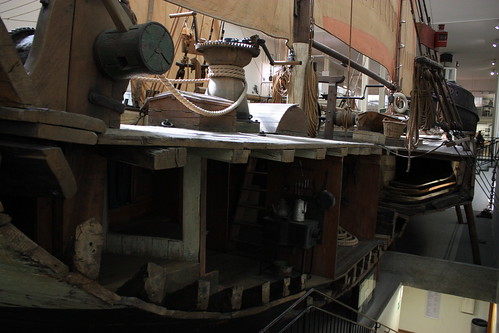 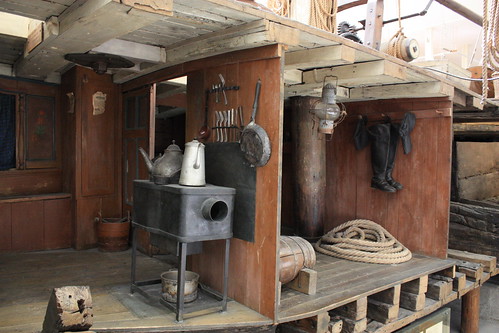 She smelled of old wood and salt, and I really wanted to grab a knife and stab it into the sail, tearing my way down to the deck while screaming, “HEY YOU GUYS!”, but Rand keeps insisting I not do anything to get myself deported.

At this point, I’ll have you know that I was feeling rather cocky – I totally get boats. I was ready for my alien abduction. I’d tell them all about boats. I’d come off as a genius, provided no one asked me about density and water displacement and buoyancy.

And so, in order to knock myself down a peg, I headed to aeronautics section.

Other than one piece of sage advice that I repeat time and again on my blog (“NEVER go to the lavatory without shoes on.”), I know squat about planes.

Despite how much time I spend in them, I still have many unanswered questions. How do they fly? Why are snacks on European flights so much better than the ones in the U.S.?

And why is it that on nearly every flight we take, I am always seated directly behind a farter? (Though in all fairness, I’m sure the people sitting behind me think this, too).

Given the mystery that I find normally surrounds planes, I was mesmerized by this cross section of one: 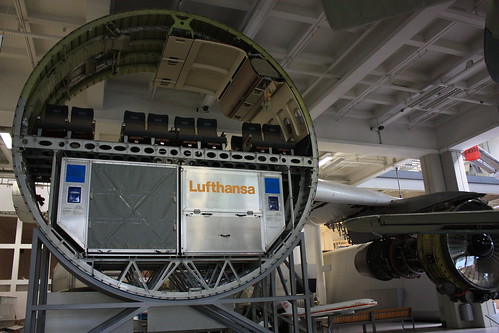 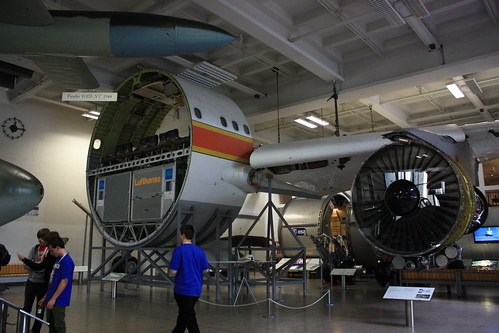 The aeronautics section covered everything from early flight – like this reproduction of the Wright brothers’ plane – to giant airbuses and beyond. 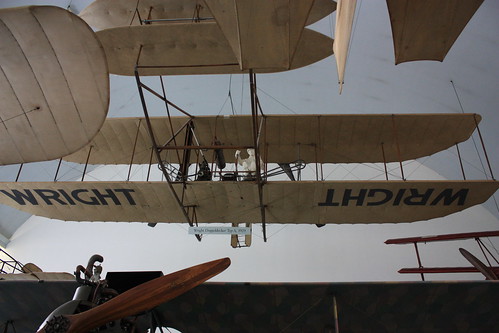 And what’s this? A space laboratory? 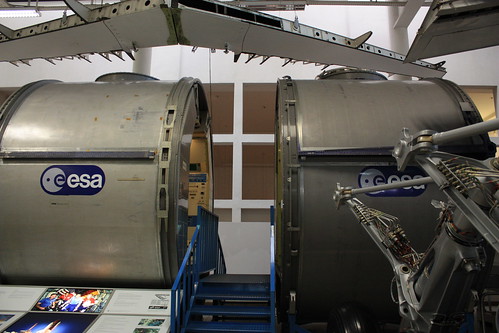 WAIT, EUROPE HAS A SPACE AGENCY? SOMEONE CALL THE PENTAGON.

What’s that? They already know? Okay, nevermind. Turns out the European Space Agency actually worked with NASA on lots of projects. The Spacelab on display at the museum integrated into the cargo bay of NASA’s space shuttle Columbia, and orbited the earth for nine days on a mission back in 1993.

Just so we’re clear, this means you can walk around on something THAT WAS IN SPACE. Yes, this is worth geeking out over. 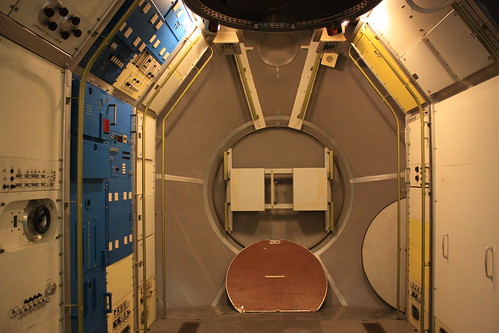 Bonus: it included a mannequin in a bad toupee. 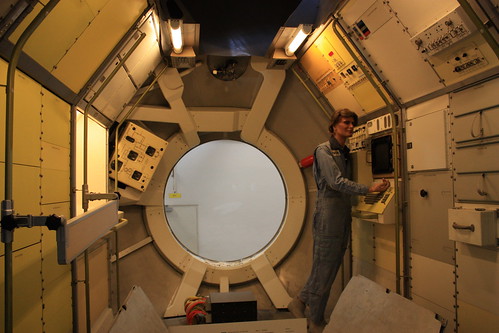 The flash on my camera illustrates just how bad: 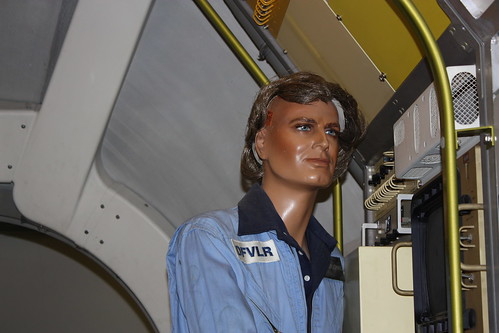 I continued to wander around, not knowing what most of the things I spotted were. It didn’t help that many of the signs were solely in German (as one would expect at the Deutsches Museum).

And then, weirdly, I saw one thing I recognized: 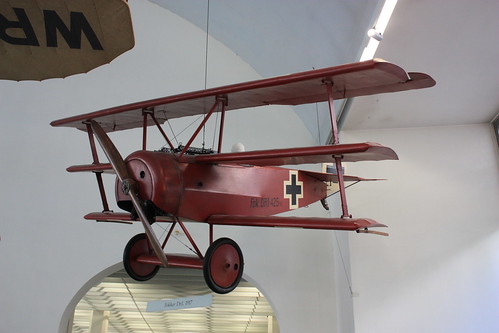 It’s a Fokker plane – or a replica of one, at least – like the one the Red Baron flew. My exact words upon seeing it were, “HOLY CRAP, IT’S A FOKKER.” Which earned me quite a few dirty looks, because it is hard to scream “FOKKER” and not sound like you are yelling something inappropriate. 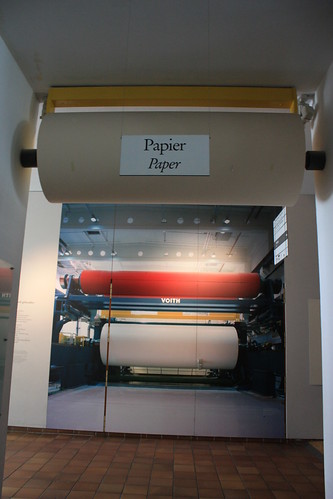 The museum covers the entire spectrum of human technology, so it’s safe to assume that some things are going to be more interesting than others, right? But this hardly seems fair. Other parts of the museum get giant sailboats and spacelabs. The paper section gets old tissue boxes.

No, I am not kidding. 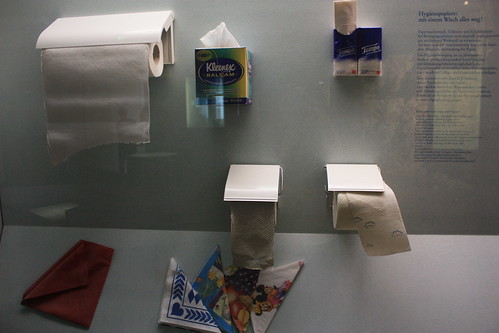 They get old tissue boxes.

Dude, Magneto would totally have a field day in this part of the museum. It started with examples of early metal work, like this suit of armor: 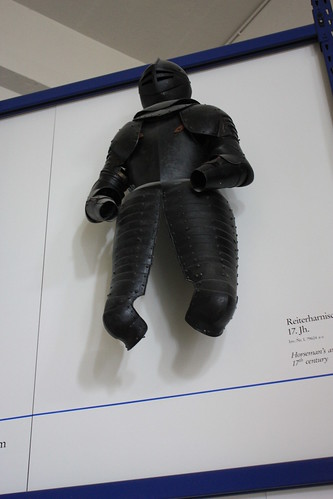 And went on to talk about the origins of blacksmithing, and how we cast metal in present day. 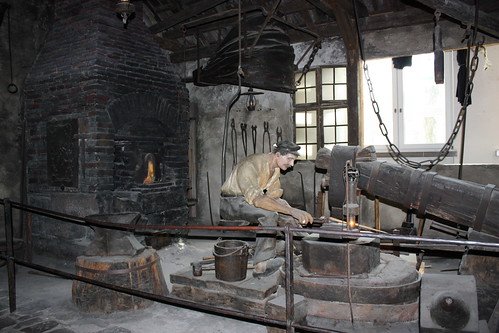 This enormous hand is actually a recreation of one on the famed Bavaria statue in Munich: 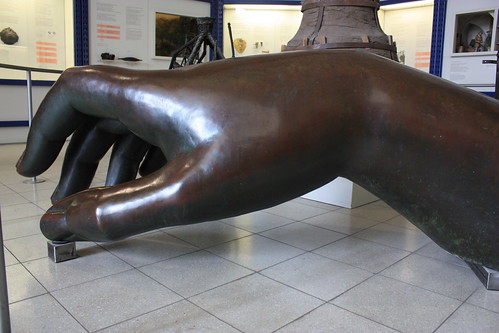 Perhaps it was the effect of the jet-lag, or the fact that I was famished, but there were huge portions of the museum that struck me as random. There was a glass-blowing exhibition (full of lovely little creations that I would have gladly bought were I not convinced they’d be reduced to skin-slicing shards in my suitcase) adjacent to a recreation of a Mexican cave in which Stone-Age paintings were found. 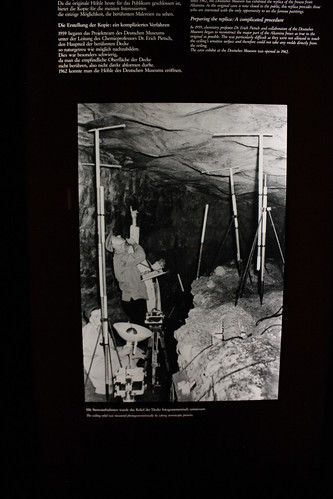 Archive photo shows measurements being taken for the recreation of the cave.

There was an early Apple computer … 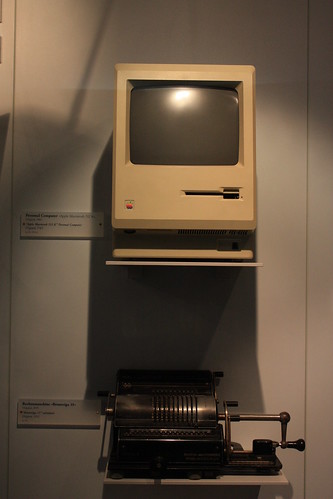 And a bunch of building toys and old Legos … 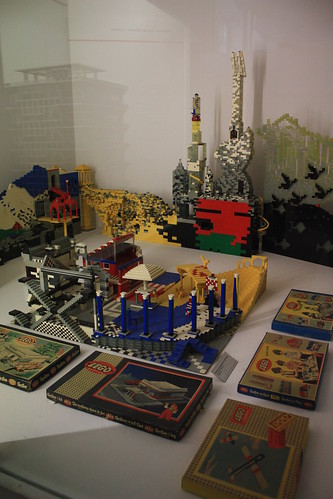 A huge start chart took up one wall … 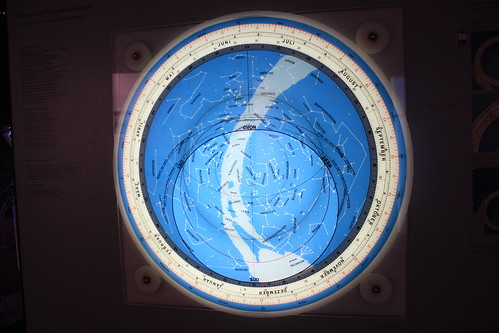 And a collection of bugs took up another: 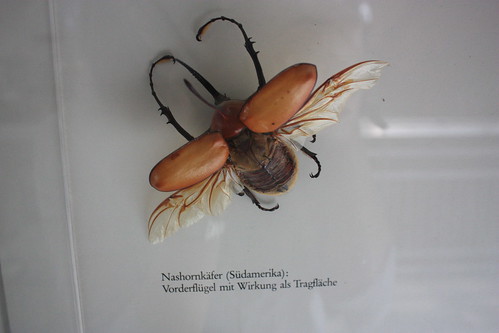 There were giant mechanical looms, used to weave huge reams of fabric. Perfect if you’ve ever wondered where Cosby sweaters come from: 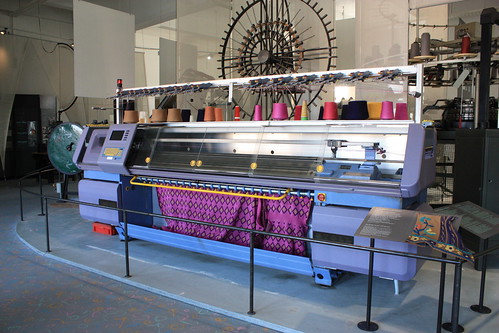 I wanted to wrap myself up in this fabric and run through the museum screaming about pudding pops.

There was even a windmill. 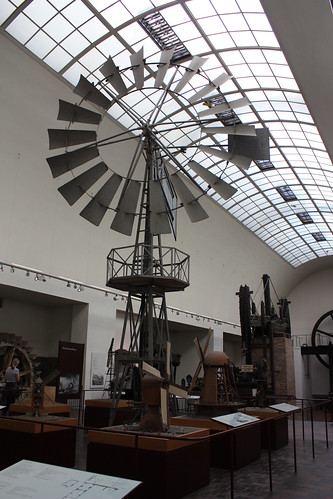 Together, the museum’s collection looks random and strange. But it’s merely a very thorough history of mankind’s innovations. We’ve moved from cave paintings to exploring space. Every invention and step in between – from pottery to glass-blowing to shoes to printing presses – helped to make that possible.

And while I seem to take that for granted (traveling in planes while barely understanding the physics of it; wearing a watch whose mechanisms I could never decipher; eating food from places I’ve never visited), it’s nice to know the Deutsches Museum doesn’t.

The Essentials on the Deutsches Museum: