When I am hungry while traveling, things go downhill very quickly.

I become snappy and irritable and overly-sensitive. In a town like Munich, this can be problematic, because German isn’t exactly a delicate sounding language to begin with. Even when folks are being courteous (which they often are in Bavaria), I want to respond to them in one of two ways, depending on my level of hunger:

(Turns out “entshuldigung” actually means “excuse me.” But try telling me that when I’m peckish. Actually, nevermind. Don’t try that.) The point is, unless I get food in my stomach at regular intervals while in Southern Germany, there is a very good chance that an international incident might go down.

” … At which point, officer, I’m told I began throwing sausages at people while screaming, ‘YOU GUYS ARE THE WURST.’ And then, apparently, things got ugly.”

Because Rand made me promise not to get deported (STUPID RAND WITH HIS STUPID TRAVEL RULES), I have made a point of noting my favorite places to get lunch, dinner, or just a snack in downtown Munich. This list is by no means exhaustive, but it will get you out of the “I’m so cranky, I might accost someone for a pretzel” category. 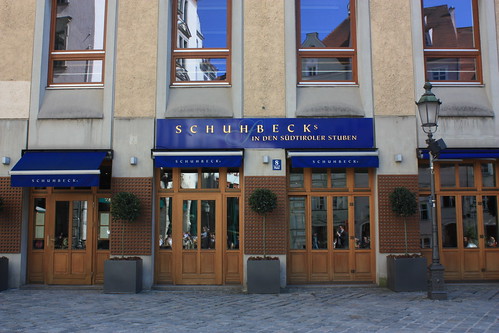 I didn't go inside because I was busy. And definitely not because I incurred a lifetime ban by yelling, "COME HERE LITTLE PIXIE!" to the waitstaff.

This place is somewhat intimidating. It’s full of attractive, mature diners in expensive shoes, who finish their meals promptly before (I imagine) going home and having some nice, efficient German sex.

Alfons Schuhbeck, the Bavarian celebrity chef behind this and several other restaurants,  is a culinary madman and a genius. His cuisine is basically traditional Bavarian fare which has spent a couple of semesters abroad and comes back sexy, tanned, and worldly.

The one time we went here, we were guests of some of Rand’s colleagues. They graciously covered the bill, and we gorged ourselves (I didn’t take photos because I was busy stuffing my face, and besides, I didn’t want to appear tacky). The rest of the night was a fog, but I swear, the waiters are pan-flute playing pixies, and I saw a delivery man carrying a huge pink bag labeled “UNICORN MEAT” into the back. 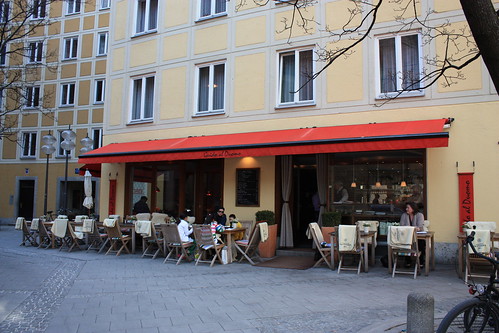 Italian food? IN BAVARIA? What is this madness?!

Allow me to explain: Bavarian food is already awesome, right? So just imagine how good an Italian restaurant in Bavaria would have to be in order to be successful. THE ANSWER IS MAD GOOD. The noodles are actually made from the hairs of angels, and that the tomatoes were harvested by newborn babies (for their weak little hands cannot bruise the delicate fruit). 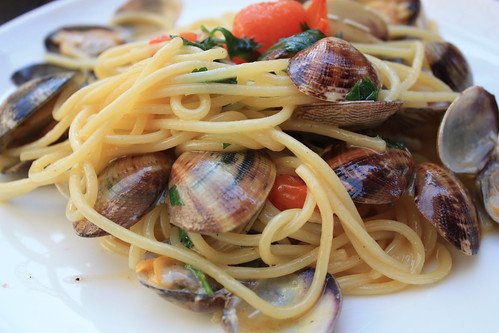 If you sit outside, you can drape yourself in animal pelts and pretend to be a marauder while daintily swirling fettucine around your fork. Is it pricey? A wee bit. Lunch for one set me back about 24 Euros. But I keep going back. 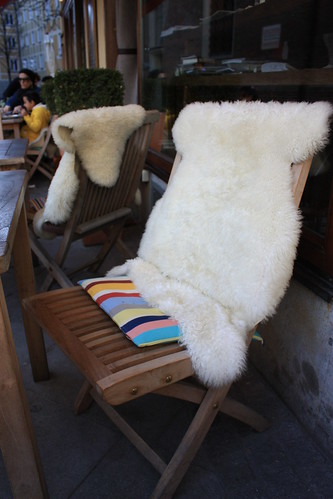 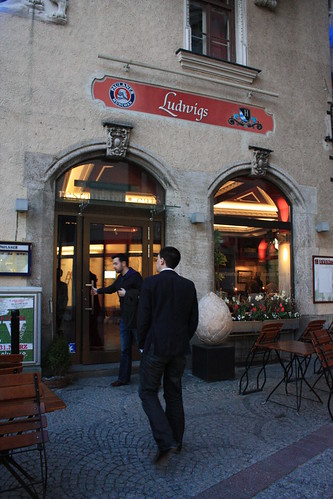 This is one of the few places in downtown Munich where I can get fresh vegetables (“Thank you” – my colon) and so I return time and again. That being said, I usually also get a heap of fried meat to go alongside it. One step forward, three steps back. 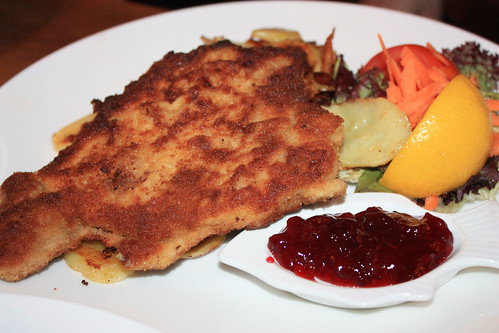 This stuff is the schnit.

Ludwig’s cuisine is great if you need lunch, a casual spot to dine with friends, or if you want other gastronomical options besides schwein, schwein, and more schwein (they’ve loads of vegetarian entrees on the menu, too). That being said, once you start veering away from Bavarian food, things get a little … weird. And not good weird.

That was a mistake. Let’s just leave it at that. 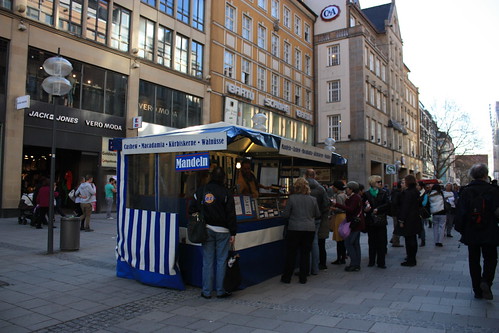 So, pretty sure that "mandeln" means "manna of the gods." Or maybe it means "almonds." Whatever.

The smell of roasting almonds and caramelized sugar has lured me to these kiosks of nutty transcendence time and time again. These aren’t simply sugar-coated. Oh, no. They are rolled in every decadent topping imaginable. Cocoa. Cinnamon. Coconut. Pixie dust.* SPRINKLES OF PURE MAGIC.* 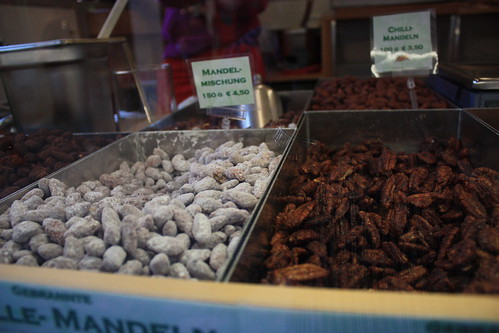 You may find that you will devour the entire cone of nuts over the course of an afternoon. 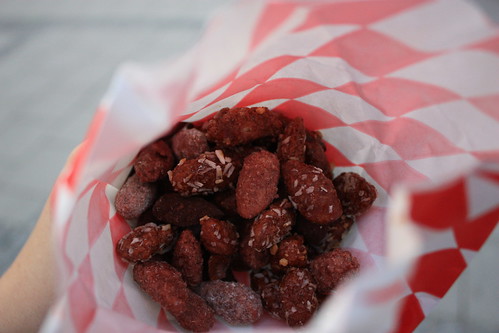 At some point therein, your husband may look at you and say, “Are you still eating those? I thought you said you were feeling sick from eating too many.” Feel free to respond by pelting him with a rogue almond while screaming in fake German.

This is hands-down my favorite place for traditional German food in downtown Munich. 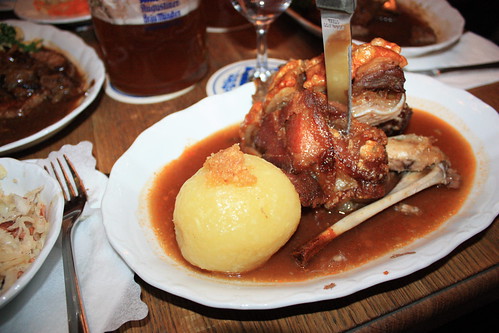 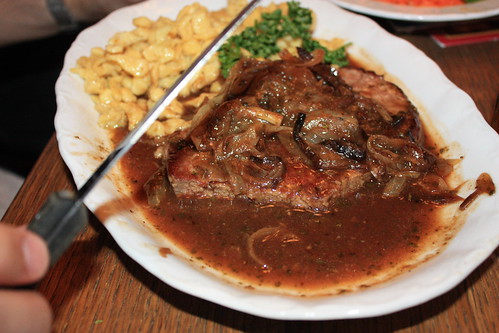 Do not be frightened away by the tacky, touristy vibe this place gives off. Do not run screaming from the pretty waitresses in dirndls. They are very competent, and every one I’ve ever met has spoken English with better grammar than me. (<— OMG, see?)

Nor should you scoff at the presence of the oompa band (instead, say hello to the dude playing the tuba, because I think he used to be my dad’s neighbor).

Yes, Augustiner has all of these seemingly-touristy accouterments, but it also has some of the best traditional German food in downtown Munich, and comically large beers.

Warning: there’s like, a dozen locations all over the place, so if one of your friends tells you to meet them here, specify which one otherwise WE WILL ROAM THE CITY FOR AN HOUR LOOKING FOR YOU, BOB. 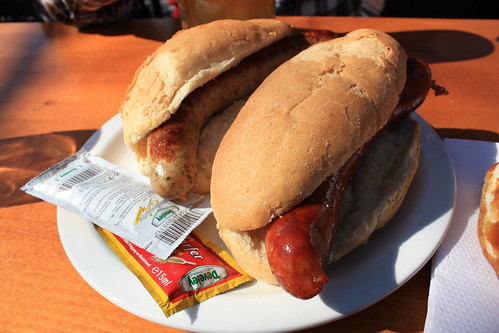 On warm days, the Viktualienmarkt is filled with people downing beer and munching on wieners (Geraldine paused to reread that last sentence. She wondered if she should rewrite it, but soon decided that she’s not too old to laugh at the word “wiener.”) 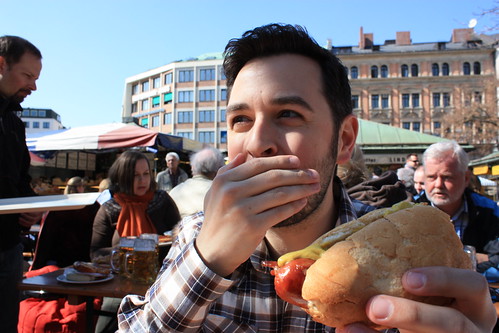 It’s a veritable sausage fest, and that’s okay. Because the wursts sold here are plump and juicy (“This is getting ridiculous,” she thought to herself), the beer is cold, the wooden stools forgiving, and the double entendres plentiful.

PENIS. (She had to get that one out.)

Okay, folks. I know that this list isn’t exhaustive. That some of you are already slapping your hands against your forehead and saying, “SERIOUSLY? IS SHE INSANE?”

To which I will respond, “OH YEAH? WHY DON’T YOU SUGGEST SOMETHING, BUDDY?”

At which point Rand will run in and wonder why I am yelling at my computer.

But really – please do share your favorite places to eat in Munich in the comments section below. And if you know any place stateside where I can get those candied almonds, I’m all ears …