Note: The steroids are still in my system, and consequently I am still talking about food. And Vegas. Bear with me, kids. 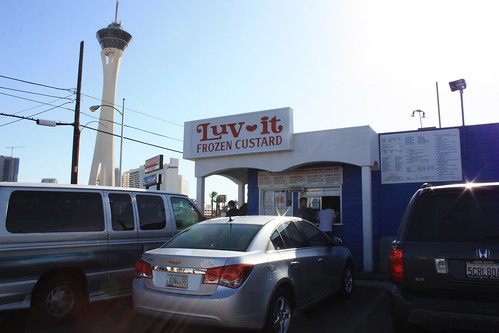 I am a 31-year-old woman of reasonable intelligence (even after my brain surgery, I feel this latter comment is safe to say). I would like to think that most of my tastes are fairly sophisticated. I can enjoy a decent glass of scotch. I appreciate liver pate. I think Woody Allen is funny and still sort-of-relevant.

But despite all of that, I have a confession: I really like rainbow sprinkles.

Whenever there is an opportunity to add rainbow sprinkles to something, I do, even though I realize that it makes whatever I’m eating look like it was crafted by either Dr. Seuss characters or a slumber party’s worth of 9-year-olds.

Chocolate sprinkles aren’t bad, either. I’ll take them in a pinch. But really, I’m a sucker for the rainbow variety.

There is literally even a brand of sprinkles with my name on it.

Here’s the rub, though: despite the fact that I insist on adding those little rods of color to nearly every sundae I’ve had the privilege of concocting, they rarely add epicureal merit to my dessert. They’re often chalky or waxy and almost certainly tasteless (how can you not taste of sugar when that is WHAT YOU ARE MADE OF? Answer me that, sprinkles.), and they embed themselves into every depression and curve of your molars so that you finally have to jam your finger back there and dig them out.

Why, then, do I show such dedication to such  a sub-par ice cream topping? Because they’re pretty. And because, on rare occasion, you may happen to come across really, really good sprinkles. Crunchy accents of sugary deliciousness studding a creamy confection – it makes you feel like you are a fourth-grader all over again (minus the bullying or awkwardness).  Those good sprinkles, those transcendental few, make putting up with all the waxy-mediocrity worth it.

On a hot day in Vegas a few months back, Rand found a small frozen custard shop downtown – Luv-It Frozen Custard. Its reviews said it was some of the best around.

What they did not add, and what I feel is a bigger claim to fame is this: they have friggin excellent sprinkles. 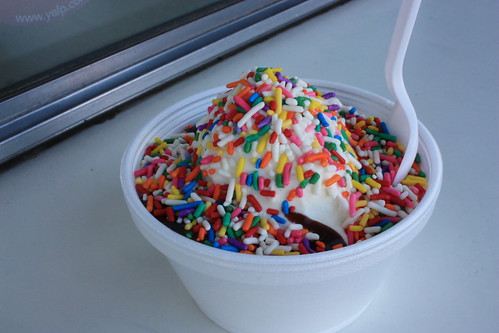 The frozen custard isn’t bad, either (if you are wondering what makes frozen custard distinct from ice cream, it’s the addition of egg yolks). A rich, smooth soft-serve, it’s so dense that when you dip your spoon in your confection, you have to hold onto the styrofoam cup firmly, or you’ll lift the whole thing straight up, and your entire sundae will dangle from your spoon.

They make a variety of flavors, but only a very select few are offered on any given day, along with the staples of chocolate and vanilla. There are plenty of toppings and sundae variants, though, for those wanting to customize their treat. Rand got bananas, caramel, and chocolate sprinkles on his. 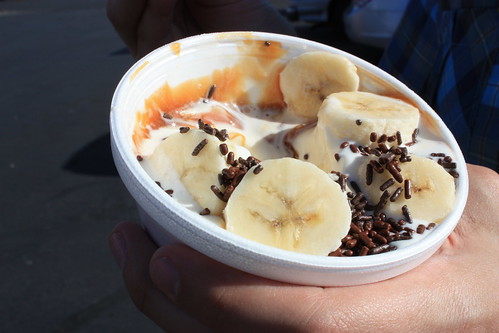 I can feel my teeth rotting while just looking at this. It was wonderful.

If you are anything like me, you may panic slightly at the sheer wealth of options before you.

And if that happens, just go with sprinkles.

We stood in the parking lot, the sun fading behind us, and ate our ice cream. We could hear the incremental screams from one of those ridiculous amusement-park-style rides from the Strip in the background. You know the ones: perched on top of a hotel roof, they drag poor, drunken fools up with a complex system of pulleys, their legs dangling below, and then drop them unceremoniously towards the earth.  They are inevitably called the Stratosphere or the Orbiter or the Vomiter or something to the effect. Over and over again we heard the sound of the pulleys, a brief moment of silence, and then their (hopefully) delighted shouts.

They screamed. We ate ice cre … er, frozen custard (damn it. I was hoping I could make that play on words work).

And one of us – I’m not saying who – might have gotten some of the sticky dessert in her hair (You can tell it was me, can’t you?) And then proceeded to whine about it, and used said whine as a justification for eating half of Rand’s ice cream, too. 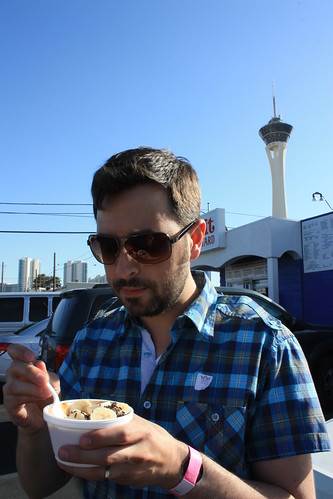 And guess what? The chocolate sprinkles weren’t bad, either.

They are cash only, so come prepared. Take a cab or drive (they have ample parking) as you can’t really walk here. Don’t be too discouraged by the long line – we managed to avoid it, but one formed almost immediately after we got our treats. There is no seating, so instead you’ll have to stand in the shade of their generous awning, and take care that the hot, dry Vegas wind doesn’t blow your hair straight into your dessert.