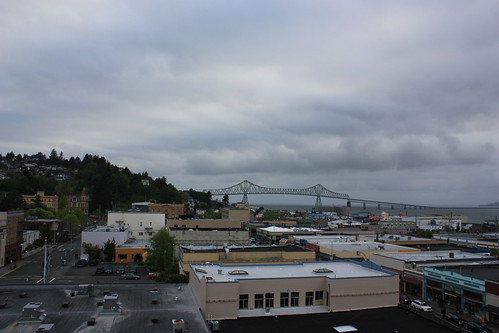 View of Astoria from The Hotel Elliott.

I’m such a sucker for old things.

Whether it be grey-haired octogenarians or day-old pastries, I find myself smitten. Sure, they’re sometimes a bit crustier than you’d like them to be, and you can’t help but think of what they were like when fresh, but they’re still fun to nibble on. AND THAT GOES DOUBLE FOR THE PASTRIES!

Back to my original sentiment: I like old stuff.

This affection for things of yore is why I love Astoria so much. Nostalgia hangs over the town like a cloud (as do, you know, actual clouds: Astoria gets something like 12 sunny days a year). It helps, of course, that this grey little town was the filming location for one of my favorite childhood films: The Goonies. In fact, Astoria hasn’t changed all that much since then. You can still spot many of the locations where the movie was filmed, and they look much the same as they once did.

Indeed, visiting there – and I say this with all due affection – is a bit like taking a step back in time. Not terribly far, mind you. Just a few years – to the late eighties or early nineties.

To a time when travel agencies still existed … 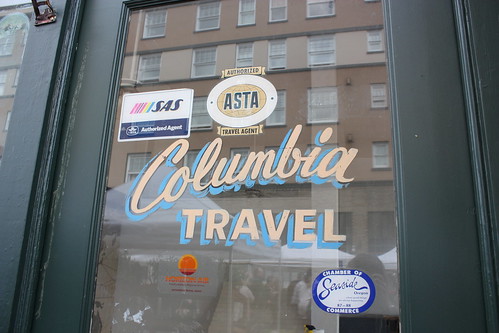 This agency office had actually closed … and moved down the street. That’s right: it was still in operation.

And Perot was a viable candidate … 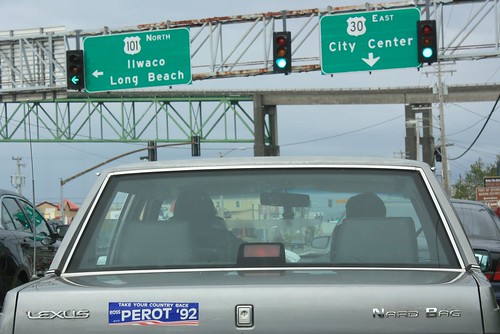 Please note that in the lower right-hand corner, it says “Nard Bag.”

Of course, Astoria itself is far older than that. It first became a town back in the late 1800s, which, by our American standards, is POSITIVELY ANCIENT (hush, Europeans: no one wants to hear about how much longer you’ve existed than we have). As a result, there are lots of cool, old buildings downtown. 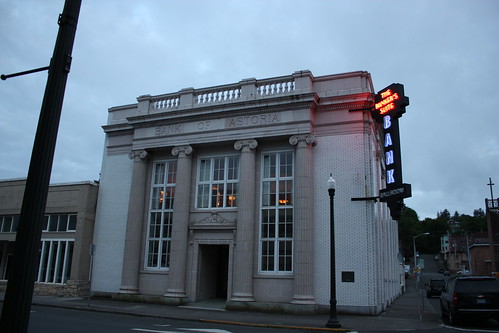 And plenty of neon signs: 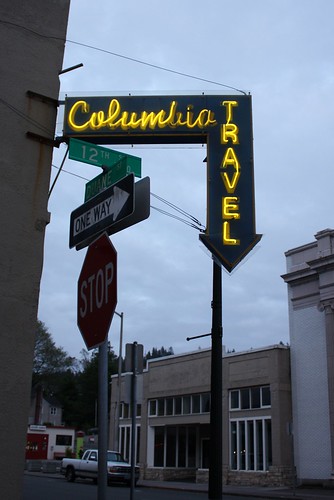 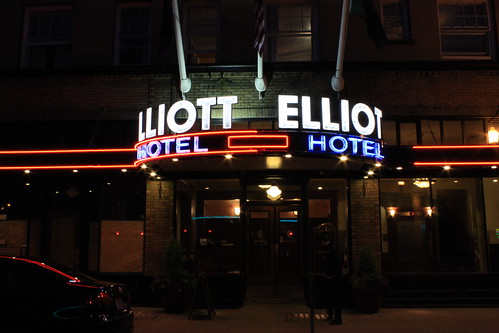 Including the one on our hotel.

But perhaps my favorite part of Astoria (besides, of course, the Goonies house) is the antique shops. There are two which I love.

This shop is located in downtown Astoria, and is full of salvaged fixtures and signs. 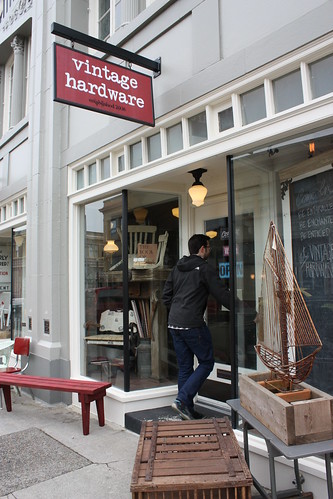 You know that relative you have who’s a weensy bit of a compulsive hoarder? The one with the garage that’s really fun to dig around in, even though you realize you will probably require a tentanus shot afterwards? Vintage Hardware is kind of like that. But cleaner. 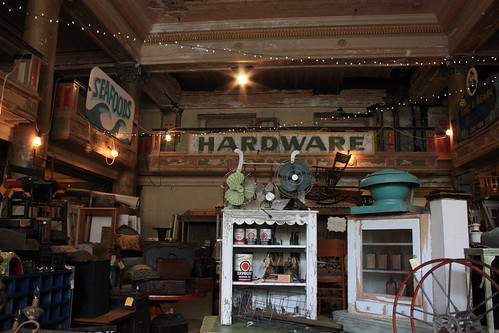 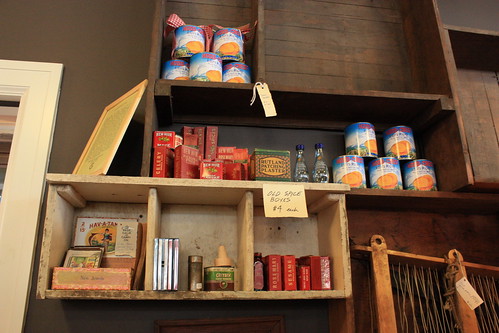 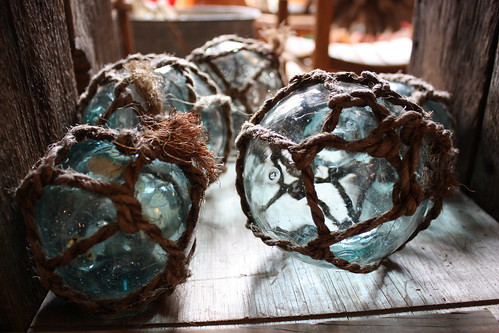 Rand and I both dug the ceiling: 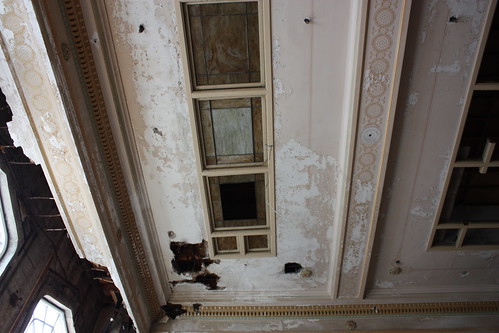 Yes, it’s falling apart, but so are zombies and … wait, no. I hate zombies.

If you go, keep an eye out for the old wheelchair, which looks like something out of a Hemingway novel. 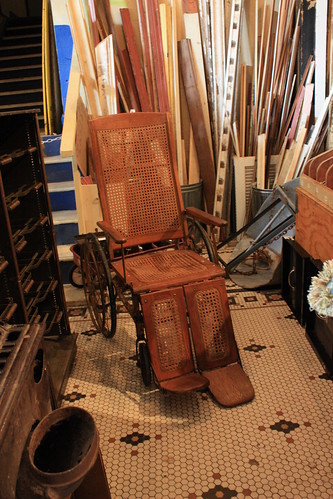 Anyone else slightly creeped out by old medical supply stuff?

This shop – a collection of little alcoves and consignment stands – is located on the other end of town, next door to a bowling alley (die-hard Goonies fans will recognize the alley from the intro to the movie: it’s where Chunk sees the police chase and accidentally slams his shake and pizza into the window).

It’s like eBay exploded in there. Phog Bounders is brimming with all kinds of stuff. 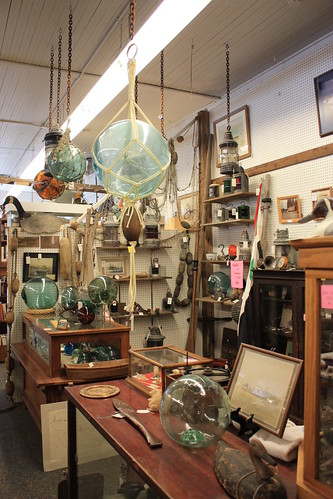 The ticking of these clocks drove me mad, in a it’s-the-beating-of-that-hideous-heart kind of way. 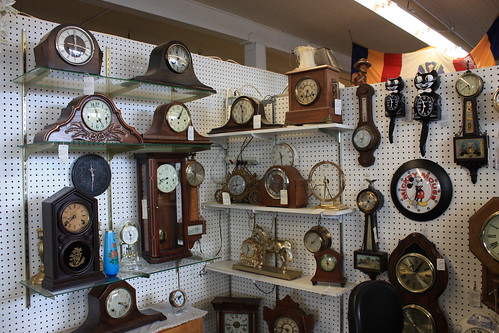 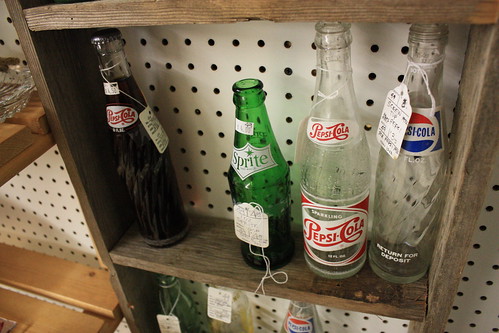 Be sure to check out the downstairs, which has some fantastic displays: 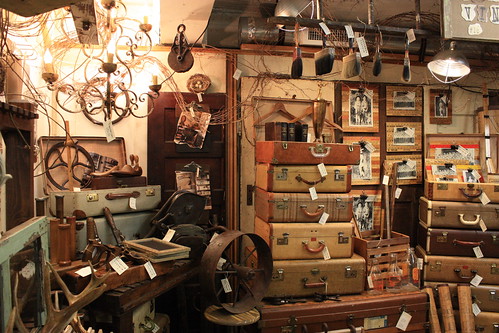 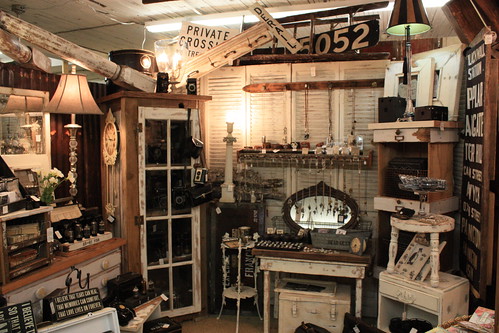 Including this item, which … well, I don’t know what the hell it’s supposed to do. Besides inspire nightmares. (Seriously, someone please explain to me why this exists.) 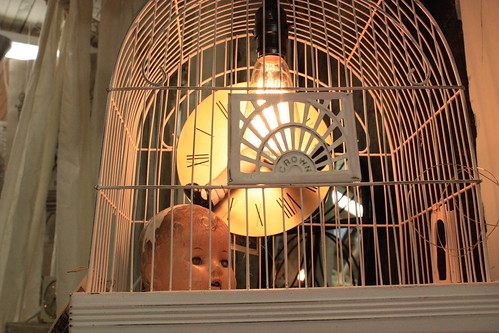 It’s really easy to take care of – you just feed it the soul of a child every week or so.

And, because it’s Astoria, after all, there’s plenty of Goonies memorabilia for sale: 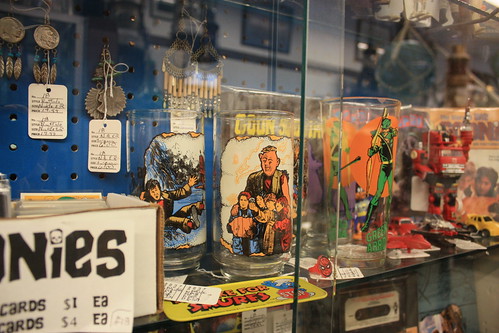 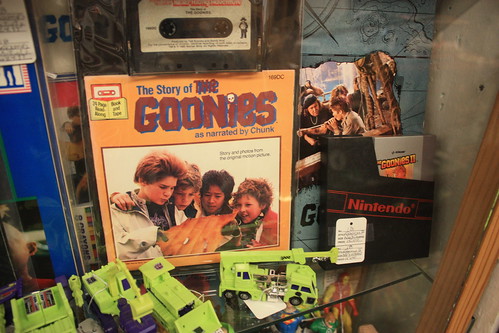 Also pictured: those damn construct-o-bots that were impossible to put together.

It’s not that I fear change. I dealt with Mad Men going through not two, not three, but  four Bobby Drapers in as many years. I love putting new sheets on my bed, and I secretly delight in tossing out milk a day before it expires (by then it’s already started to taste funny). But there is something I love about the past – whether it be recent or not – that makes visiting Astoria all the more magical.

It’s enough to make you hope it always stays exactly as it is. 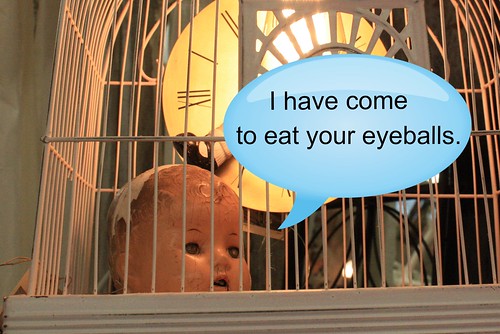 Well, for the most part, anyway.