Skip to content
Posted in: Life at Home, Nothing to Do With Travel, Random Musings, WTF Wednesdays

For several days, there were staples in my head. I wish there were a more technical term for them, but there isn’t. They were not sutures or metallic head brackets or anything like that. These were good, old-fashioned, industrial-size staples, like the kind you’d find at the hardware store.

Miraculously, I don’t remember most of them going in, save for one. I do remember that last one, because it felt like … well, it felt like someone putting a staple into your head. The poor doctor wielding the staple gun apologized repeatedly.

That sentiment made me incredibly sad. Imagine no one liking you because your job is to put staples in people’s heads. Tragic, really (and for the record, I really liked her).

The good news is that getting them out doesn’t hurt at all. My friend Chad (who I have never met in real life, but we talk on the internet, so I’ve declared him my friend) describes the experience of getting his head staples out on his blog. It’s somewhat riotous (as is his entire blog) and I suggest you read it.

I can vouch for everything he says. They pretty much use a staple-remover and pull the suckers out, and you barely feel a thing.

Mine came out last week, and for the last few days, I’ve just had a bit of a sore spot on my head, along with itchiness where my bald spot is growing back in. (Yes, I have a bald spot now. Oh, and the steroids have given me a gut. I’ve never felt closer kinship to middle-aged men than I have at this moment. I might try and pick myself up at a bar later. Hopefully I won’t get shot down.)

Anywho, what was I talking about? Oh, yes. Brain staples. My friend Bob recently sent me this: 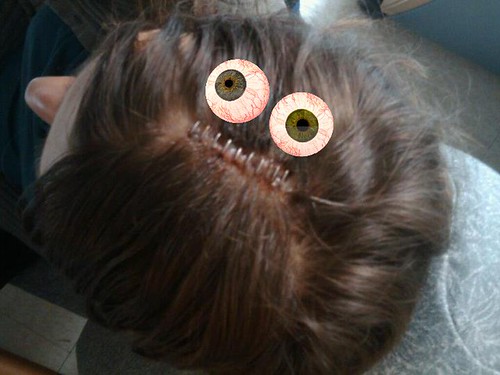 He made it just for me. It’s my head, obviously, with little googly eyes on it. And then he sent me a fruit bouquet, which is basically the best kind of bouquet you can send anyone. It shows that you care as much as sending them flowers, BUT YOU CAN ALSO EAT IT. You all know how much I love eating things.

Bob is really wonderful, is my point. As are fruit bouquets. Brain staples not so much.

Nothing to Do With Travel, Random Musings, WTF Weds