Skip to content
Posted in: Awesome, Steal This Idea

No, I’m not referring to that one time in Barcelona (though I must say, the sheer amount of hate mail I got over that post was both unexpected and delightful).

My sticky-fingeredness occurs far more often than that. I steal from friends, from loved ones, from both those closest to me and those I’ve never met. Sometimes, it happens without me realizing it. Most of the time, though, it’s completely intentional.

I’m not guilty of taking anything tangible, or anything that would be missed. Instead, I swipe expressions and mannerisms. I’ll lift the occasional quirk or habit. Sometimes I even pick-pocket family traditions and practices.

And I weave all of this loot – the quotes and quirks and habits and expressions – into the patchwork of my life. They make up who I am, though I can take credit for originating very few of them.

I’ve ripped off nearly everyone I know.

I’m pretty up front about my thievery.

Most people don’t seem to mind. I think it’s because they’re guilty of the same thing. We’re all a pastiche of a thousand little actions and words borrowed from those around us. I’m convinced that,  if we’re responsible in choosing what we appropriate from others (because we can just as quickly assume bad habits as good ones), we can become better people. And some folks have habits and mannerisms so rich and delightful, you can help but want to take them for everything they’ve got.

That’s what happened when Rand and I went to Colorado to see our friends Brad and Amy for a weekend. We basically robbed them blind.

Metaphorically, I mean. Although I left with a suitcase far more full than when we arrived. Let me explain.

The first time we visited Brad and Amy was just before my surgery. When we walked into the guest bedroom, we found the bed decorated thusly: 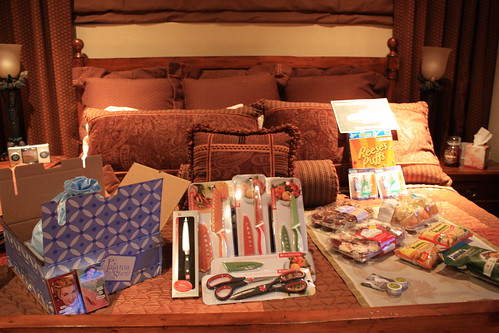 It was a seemingly random collection of toys and treats, but nearly every one was a reference to some inside joke. There were Icelandic lip balms (because Colorado gets dry) and Reese’s Puffs cereal (which Brad declared the most delicious breakfast cereal, ever) and no less than two dozen cupcakes. 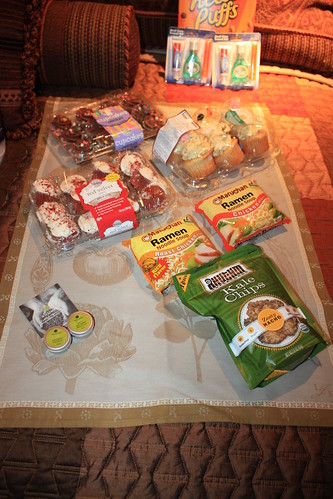 There were lots of knives, too, and some pajamas, in the event of a drug-induced jammie-wearing knife fight later.

I know, I know, I know – this all sounds positively insane, right? I thought so, too, followed almost immediately by, “Holy crap, I need this kind of crazy in my life.”

This visit, we’d figured the two of them would sane up, and not decorate their guest bed with all sorts of presents and treats and cupcakes. This is what we found when we walked into the guest bedroom: 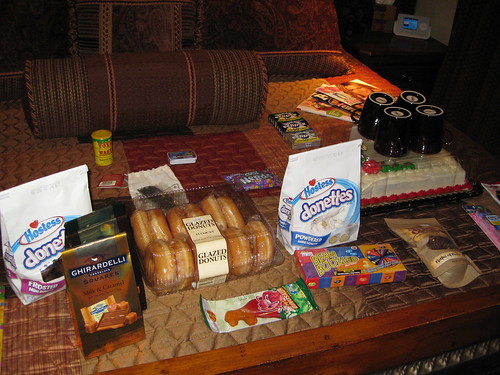 To be fair, there were no cupcakes this time (we’d all deemed the previous ones to be not quite up to snuff. This didn’t stop me from eating three of them. Whatever). But there was an entire red velvet sheet cake. With cups on top on it (get it? Cups and a cake? Cupcakes? It’s clever, damn it). And holy cats, was it good. I ate it on the kitchen counter, digging a fork directly into the whole cake, as everyone looked on, somewhat horrified. I offered them bites, and they declined. It was delightful. 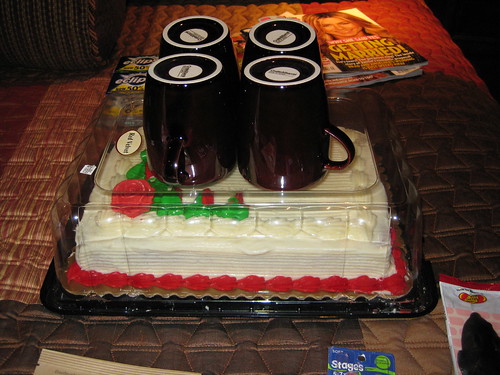 “Notice the huge blank spot on the cake where we should have written ‘Congrats on getting rid of Steve’, but did not.”

Rand captured my reaction on his cell phone. 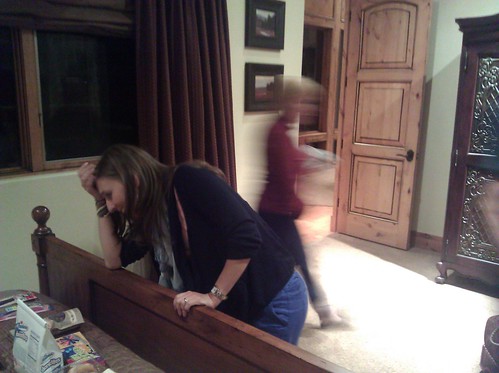 “I’m not gonna have to share this stuff, am I?”

The first time we found a bed blanketed in gifts and sweets – an extreme version of getting a chocolate on your pillow – Rand and I figured it was because of my impending surgery. The second time, though, we realized a sort of beautiful madness was afoot, and it was something we needed to emulate.

The next time someone stays with us, we’ve vowed to covered their bed in all sorts of random and strange presents, indicative of our friendship and the weird jokes and exchanges that we’ve had over the years. Stuff we insist that they take home with them, so that their suitcases are full of candies and novelty toothbrushes and trashy magazines.

(We hope that we get to pay back Brad and Amy for their hospitality, but we might have trouble convincing them to snub the wonderful hotels of Seattle in order to sleep on our guest futon.)

It’s a great idea, isn’t it? And I promise, I won’t mind at all if you steal it from me. Hell, it wasn’t even mine to begin with.