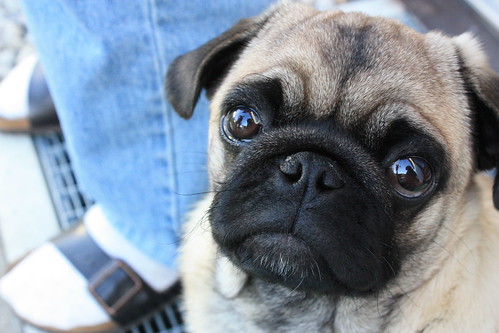 I couldn’t find any photos of my old cat, so here’s one of Anton, my dad’s pug. One little fuzzy bugger is the same as the next, right?

Growing up, we had a cat.

You know what? That statement isn’t quite accurate. We actually had several cats. But there was one cat that sort of stood out from the rest. A spry little calico with markings that I still remember by heart: one eye was rimmed in black, the other in orange, like a little harlequin. She was brilliant and affectionate and in the 17 years that we spent together, I can only remember her scratching me once, unintentionally.

When we finally had to put her down, after a miserable tumor in her face made it impossible for her to eat, I cried. My brother cried. My grandmother cried. And my mother cried, as she pulled the cat into her arms, looked down into her face and said, “Honey, I really hope you have a soul.”

The point is, we loved that cat. As much as was sanely possible for someone to love a cat, we did.

“Sanely” being the operative word here.

Several weeks ago, when Rand and I were flying back from Denver to Seattle, we found ourselves seated next to a very pleasant dark-haired woman. She noticed that there was an empty seat in first class, and she asked the flight attendant if she could move into it.

Bold move, no? I kind of had to respect her for it. I wasn’t too surprised, though, when she was told no. We were flying Alaska, and I knew that there was a long line of folks who were waiting to be bumped up to first class (hell, we were among them). Unless the woman was the next name on the list, she wasn’t going to get the seat. But her request did bring the empty seat to the attention of the flight attendant, who went to see if anyone was sitting there.

She returned to us, her eyes wide.

“The woman in the window seat bought both seats,” she explained. “The second seat is for her cat.”

We all stared blankly at each other, letting the news sink in. The woman had bought a first class plane ticket for her cat.

She bought a first class plane ticket FOR HER CAT.

Federal regulations are such that animals can’t come out of their cages during flight, even if they are registered therapy animals (of course, this rule is occasionally overlooked, and I’ve known people who have flown with little dogs on their laps or next to them on the seat). This woman had bought a spare seat for her pet with the understanding that it might have to stay in its carrier the entire time. Which, from what we could see, it did. That cat sat in its carrier, which was resting on the seat adjacent to her for the entire duration of the flight.

Now, I’m a firm believer that you can’t judge people on how they choose to spend their income. I mean, I probably spend at least the cost of a first class plane ticket on cupcakes every other month, and heads would roll if someone told me that was wrong.

If we start criticizing others on how they spend their own money, our own finances come under scrutiny, too. And it becomes sort of infinitely regressive. Run up to the woman with the first class cat and scream, “You could have donated that money to charity!” and she could just as easily say the same thing to you about any number of purchases you’ve made.

Plus, how do I know she didn’t donate a great deal of her income to charity already? Maybe she had no children, and had bequeathed everything she owned to the Humane Society. Maybe this cat was all she had in the world and they were taking one final trip together.

And they were flying first class, damn it.

So I can’t judge her for it … but still, I won’t lie: it boggled my mind. Because while I have had a cat, and loved it dearly, there was no way she was ever going to fly first class with me. Not unless she was buying.