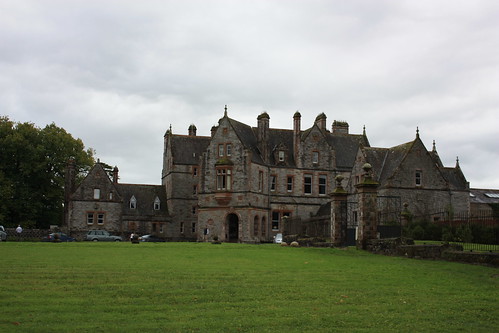 No matter how much I travel, I find that there are things that still surprise me about Europe.

Like universal health care. Or the ubiquity of nutella. Or the fact that you can drive for a few hours and find yourself in a radically different country that isn’t Canada or Mexico.

And let’s not forget castles. It’s crazy to me that castles are actually a real thing over there, and not merely the stuff of fairy tales.

But there are indeed castles in Europe, and plenty of them. There is one in the village where my aunt and uncle live in southern Italy. There seems to be one on every other ausfahrt in Germany. And last month, our friend Ciaran had his wedding reception in a castle. 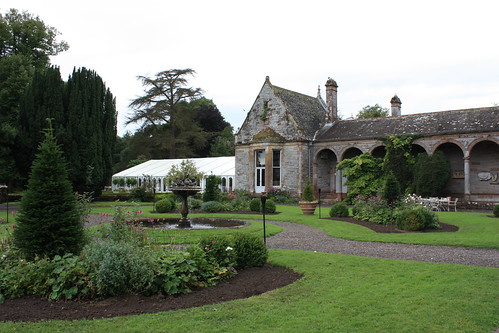 The white canopied back lawn, where the party was held.

That kind of boggles my poor American mind. That castles dot the countryside, and you can not only spend the night in one, but have your wedding there, to boot.

Castle Leslie, where Ciaran and Cathy had their reception, is located just across the border from Northern Ireland in the Republic of Ireland. There wasn’t so much as a sign to let us know that we’d crossed over from the U.K. into Europe. (I did mark the passing of the border in my own special way. I threw up … thrice. The last time, I narrowly missed Rand’s shoes as he rushed around to my side of the car in a vain attempt to hold back my hair.) 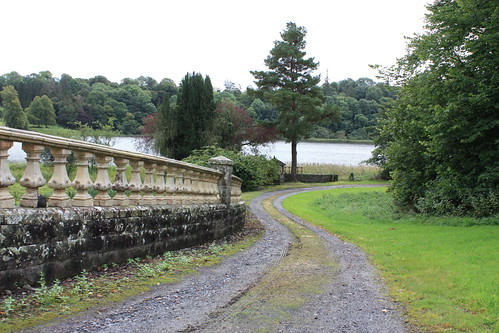 The existing structure was built back in the late 1800s, but an earlier castle stood on the same grounds for centuries before then. The Leslies took ownership of the grounds back in the 1600s, and the history as recounted on the website is absolutely delightful, full of characters with names like “Vinegar Jane” and a duke who defeated Napoleon at Waterloo. 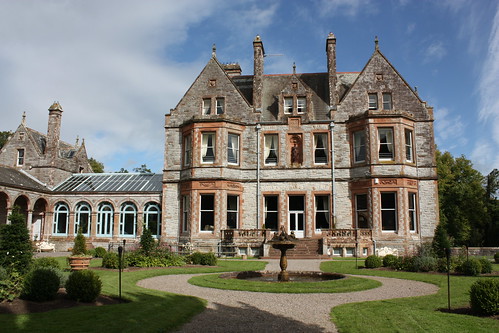 The Leslies still own the castle (which they’ve turned into a hotel, with a restaurant, tea room, and stables), and you can see Sir John Leslie, who is nearly 100, walking around the grounds. Rand and I found ourselves behind him while heading up some stairs in the castle, and while I didn’t realize it at the time, it was somewhat of a celebrity sighting.

Seeing as how he was nearly 90 at the time, and seems like a rather delightful gentleman, no one seemed to get all that upset about it. 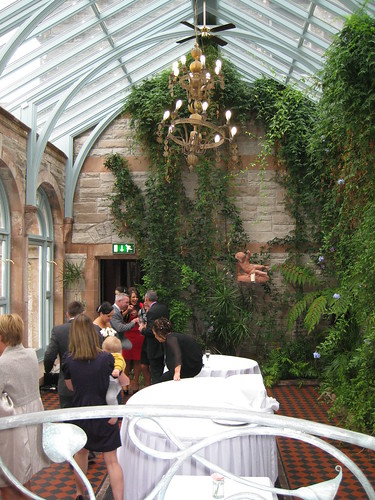 The atrium at Castle Leslie.

In the U.S., if we had anything so old as Castle Leslie, you likely wouldn’t be able to walk through it, and you absolutely wouldn’t be allowed to get drunk and eat cake in any part of it. But Europe seems to be a bit less stodgy about their historical spots – I suspect because they have significantly more of them.

We had a bit of time to explore the castle before the reception, but some of us were still nursing sour stomachs, which required us to sit for long periods of time, gently sipping on soda water, only to make a miraculous recovery just as dessert was being served. 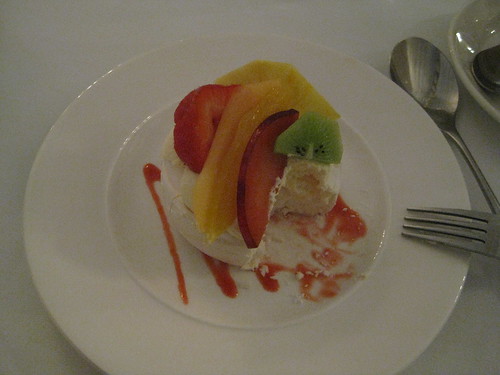 I lova, you lova, we all lova PAVLOVA. (Sorry.)

Thank goodness for the healing power of sugar.

I did take note of a few things, though. Like this ginormous baby dress, which once belonged to Winston Churchill when he was a toddler. This is surprisingly easy for me to visualize, since I’ve always kind of thought that a fully-grown Churchill resembled a ginormous baby. 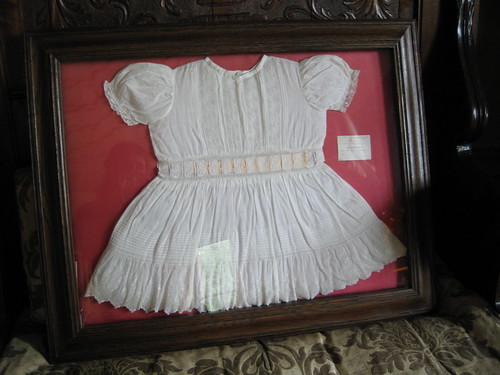 Apparently the Churchills and the Leslies were related.

And let’s not forget the crappers.

Yup. Crappers. I’d actually heard about them on the Seattle Underground Tour. A plumber by the name of Thomas Crapper had gone about improving the flush toilet with a variety of innovations, and he put insisted on putting his name on the bowls. 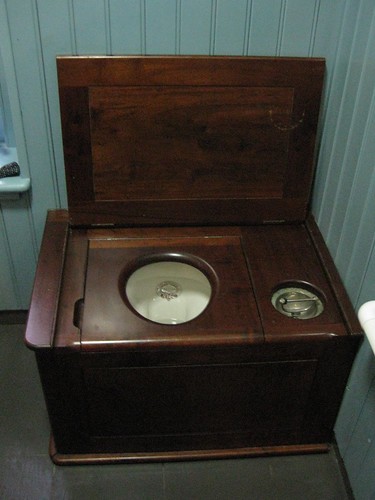 You pull the handle up to flush the toilet.

Later, during World War I, American soldiers in the U.K. read the name on toilets, and started referring to the lavatory as “the crapper.”

Castle Leslie is full of such crappers. They are actually rather lovely. 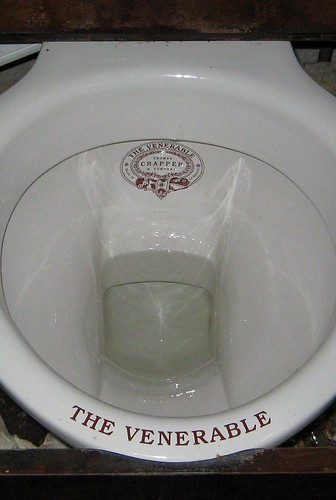 Forgive me for the extreme close-up of a toilet bowl. Sigh. This is how I am using my journalism degree.

There was even a double toilet in the ladies’ room, which everyone got a good kick out of. 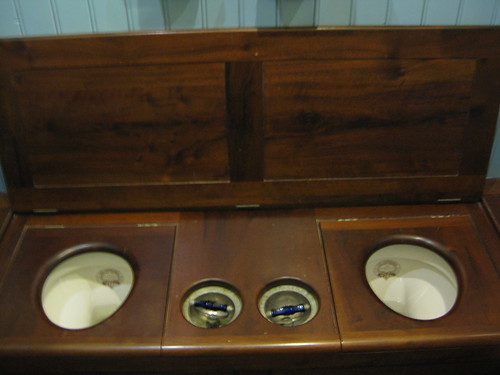 Forgive me for the blurriness of these photos. Stephen took clearer ones, but he neglected to flush the toilet beforehand, so I’ve opted not to use them, much to his disappointment.

And the day after the wedding, those of us who were not painfully hungover walked into the gray morning and explored the grounds a little more. 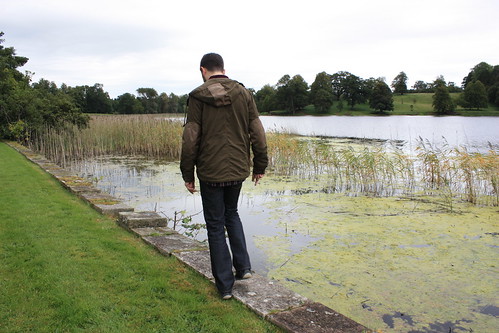 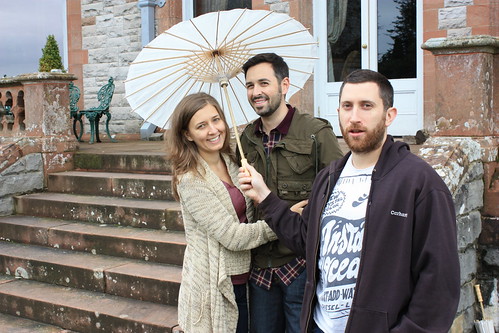 Though to be honest, I can’t really say what’s going on here. I think Stephen just really, really wanted to be in the photo. 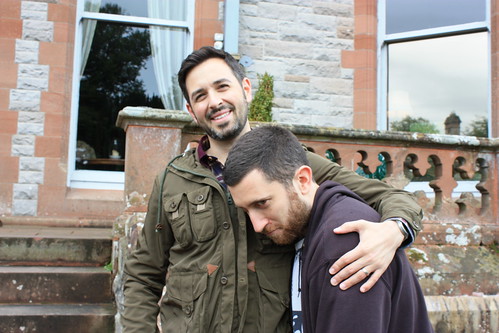 Nor can I say definitively what’s happening here. 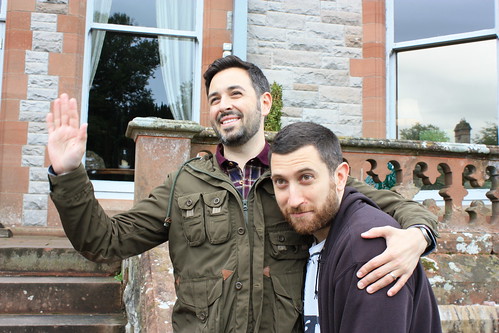 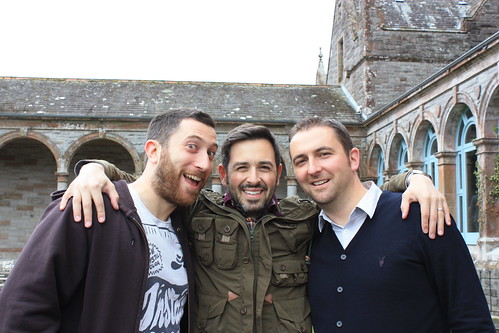 We had a great time – so much so, that when Ciaran asked us to stay one more day so we could have dinner with him and his family, we didn’t think twice before saying yes. 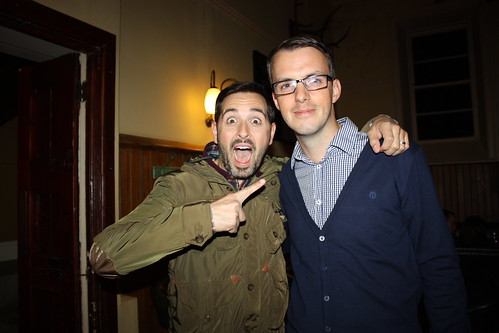 I mean, how could we say no to that face?

Because while they may be commonplace in Europe, for us, castles are still sort of magical. 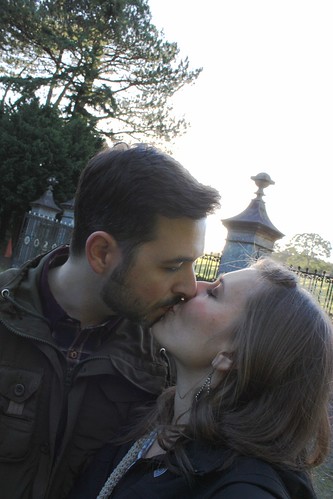