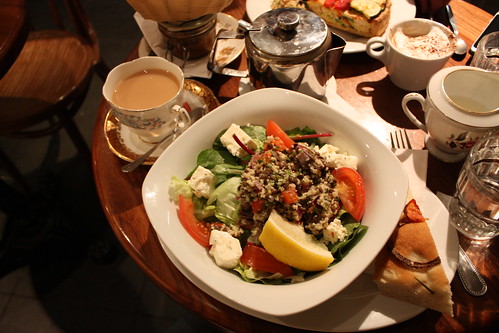 Our lunch at Queen of Tarts. Notice the conspicuous absence of actual tarts.

After my brain surgery, I had trouble accepting that I was unchanged.

“Do I seem different?” I would ask Rand, time and again.

And I’d stare at my reflection in the mirror, at my steroid-induced moonface, and say, “But I look different.”

I could not grasp that my brain had been operated on and I had emerged more or less the same. It was weird to me that all my memories remained: the time I broke my arm when I was 8; the first time I got dumped (brutally and over the phone) when I was 15; the ill-advised turquoise blouse I had on the night I met Rand. All the things that had been imprinted on that pink squishy mass over the last (ahem) TWO AND A HALF DECADES (okay, fine. Three decades.) were still there.

That was hard for me to get. As was the realization that I hadn’t attained any superpowers (seriously, what’s it take for a gal to become telekinetic?).

I began hyper-scrutinizing my behavior for a while, to see if I noticed any difference. I listened to my own voice more carefully than I ever have in my life. Did I always sound this way? (It was the inexplicable combination of Valley Girl and Mid-Atlantic WASP.) Did my gait look the same? My makeup? My penmanship?

My husbands, my friends, and my family all insisted – and still insist – that yes, yes, everything was the same. Even my constant questioning confirmed that I was my old, neurotic self. Had I been carefree and unconcerned, they might start to worry.

But even now, months later, I still occasionally insist that I am different. Certain things I say or do surprise me. Indeed, when I try recounting them back to myself, I hardly believe it.

If you told me six months ago that I walk into to a pastry shop with the delightful name “Queen of Tarts” (heh) and not get dessert, that would be simply incomprehensible. I would insist that the only way such a thing could be true would be if the shop was closed. And even then, I don’t know if that would dissuade me. I’d likely bang on the door for a few frantic minutes before wisening up and circling around the back, in hopes that I’d find a window partially open (or, failing that, DUMPSTER PASTRIES!).

But folks, I have to tell you: it happened. We walked into Queen of Tarts, and only had lunch. And lunch did not consist of cake. I repeat: LUNCH DID NOT INVOLVE CAKE.

But hey, in the words of Vanessa Williams, sometimes the sun goes round the moon, right?

(Except that, you know, it doesn’t. It never has. If it ever did, we’d probably get incinerated instantly.)

Queen of Tarts is a rather unassuming spot. They have two locations, and both were packed – the only indication that something very special was going on inside. 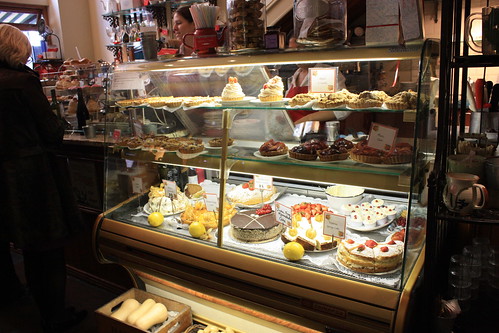 Their focus is on desserts, obviously, and though I can only judge by appearances, they seem to do them exceptionally well. 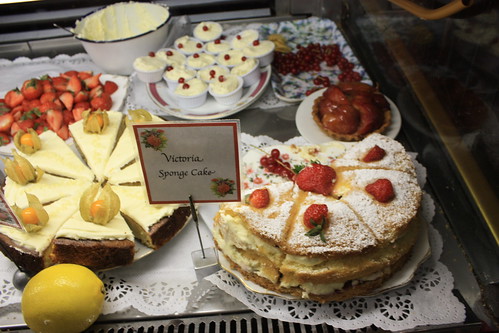 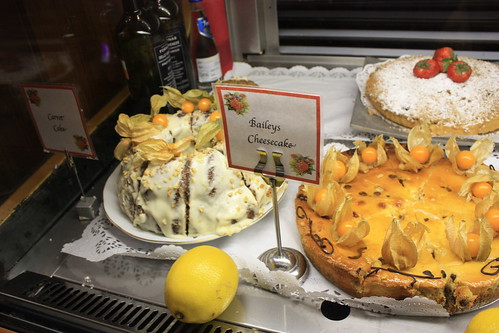 I checked out the case – which was positively packed with goodies – before we even sat down. This is something I often do at places that specialize in sweets. If quantities are limited (and if we’re talking me and desserts, they always are), I’ve been known to tell our server to put a slice or three aside for me.

But Queen of Tarts showed no sign of running out of anything, even in the face of a threat like myself, so instead Rand and I sat down to a leisurely lunch first. Mostly because my tyrannical husband suggested I provide my body with energy that hasn’t been derived from cane sugar.

HE IS A MONSTER. Don’t forget that, folks.

I must begrudgingly admit, though, that the non-sugary offerings at Queen of Tarts are quite satisfying. The menu is full of all kinds of salads and sandwiches, quiches and soups. Practically everything comes with some sort of savory baked good, a subtle, salty foreshadowing of the treats that (hopefully) lie in your future.

Coupled with a nice cup of tea in floral china, it’s the lovely, high-brow-yet-hearty sort of lunch that you’d expect from a cafe in central Dublin.

Rand got a colorful veggie quiche and an array of salads that were in no way dessert-like whatsoever. 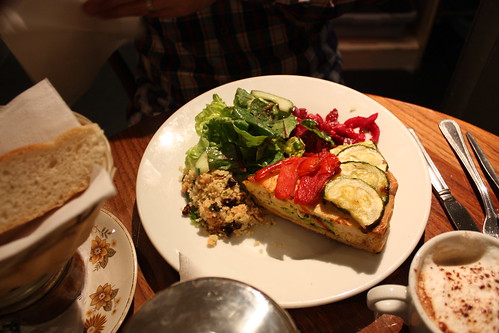 And I had this fresh and healthy-looking salad, topped with lentils, feta, and couscous. I took to calling it my “non-cake.” As in, “Rand, take a bite of my non-cake. It’s pretty good DESPITE THE LACK OF CAKE.” 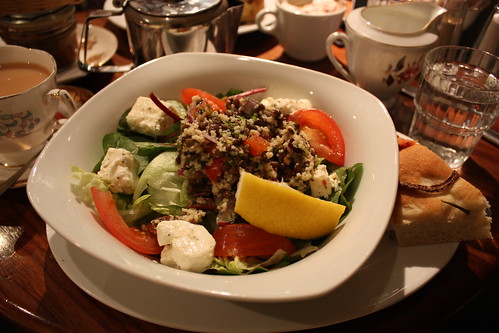 As we finished our entrees, we noticed the time – we were running late for another appointment. We had lunched at Queen of Tarts, but there was no time for an actual tart. I inhaled sharply at this realization. Rand took my hand.

“We’ll come back later and get dessert,” he promised. But then that day, and those following it, slipped away from us, as did the opportunity to return to the cafe.

In somewhat related news, I am pleased to announce that Rand and I will likely be heading back to Dublin again this spring. Someone warn the carrot cake: I haven’t changed that much at all.