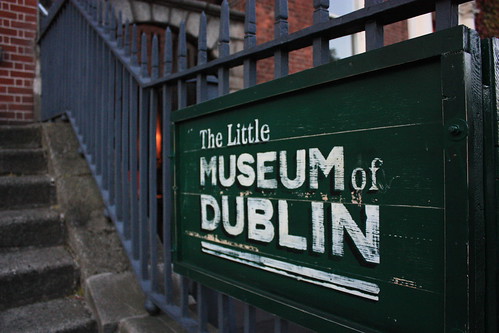 I was recently talking to someone close to me about marriage.

She told me about Buddhism, and her husband, and their shared views on infidelity – and how the damage it does is like throwing a stone in a pond. The stone causes a splash on impact, but it also causes ripples to form, which extend outward, eventually touching every aspect of your life.

In short, if you want a happy life, and a happy marriage, don’t cause ripples in your pond.

I really liked the analogy. Seriously, can you think of a more poetic way of saying “don’t go around banging random peeps”?

And with that in mind, I would like to start 2013 with a confession of sorts.

Oh, relax. It’s not that interesting.

The confession is this: I spent well over an hour at the Little Museum of Dublin, and a good part of that was because the tour guide was a total dish. He looked like a mid-nineties-era Hugh Grant. You know, Hugh Grant before he made a rash of terrible decisions which involved cheating on Elizabeth Hurley with a prostitute and making Two Weeks Notice. Both of which, I’m sure you’ll agree, are unforgivable.

Now, I’m sure a few of you are thinking, “Well, spending an hour in a museum certainly isn’t that big a deal. I’ve spent far longer than that in museums, even when my tour guide resembled Jabba the Hut.”

And that is an entirely fair point. But thing about The Little Museum of Dublin is that, as the name states, it is little. It occupies two rooms, neither of which is particularly large. 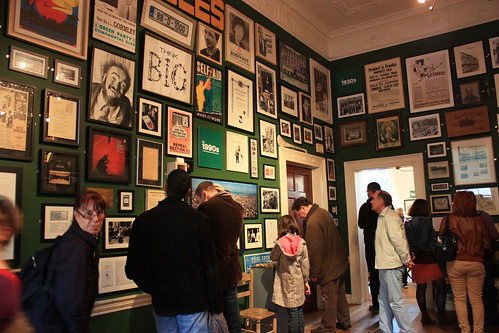 That’s right: I spent an hour in a museum the size of someone’s basement. Yeah.

Did I mention that the tour guide looked like Hugh Grant? Nineties-era Hugh Grant. SENSE AND SENSIBILITY HUGH GRANT. He of the nervous blinking and the bumbling-yet-charming insecurity and the floppy hair. THAT IS WHAT THE TOUR GUIDE LOOKED LIKE. Right down to the floppy hair.

I tried to capture said hair repeatedly on film, but there was a gaggle of swooning septugenarian women around him at all times. (Parenthetically, if you want confirmation that you have chosen the right man, look to the opinions of grey-haired old ladies. They tend to have excellent taste, and a particular fondness for my husband. He has to fight them off with a stick. It’s part of the reason we avoid cruises. And the state of Florida.) 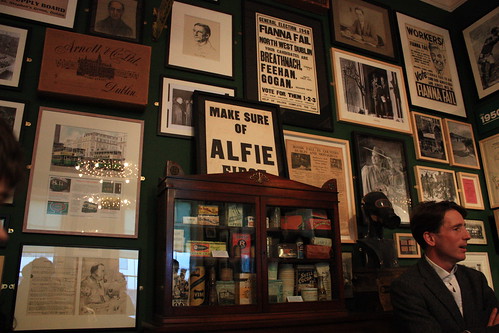 This is as near as I could get to capturing his dishy-ness.

Plus, he was Irish. 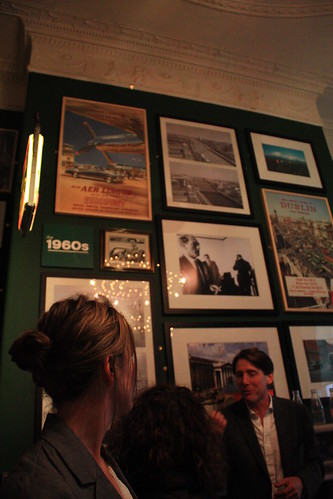 Even in this dark, grainy shot, you can clearly see that he suffered from a terminal case of excessive handsomeness.

And so I listened, intently, to every word.

Come to think of it, we all did. The room was packed (mostly with women). 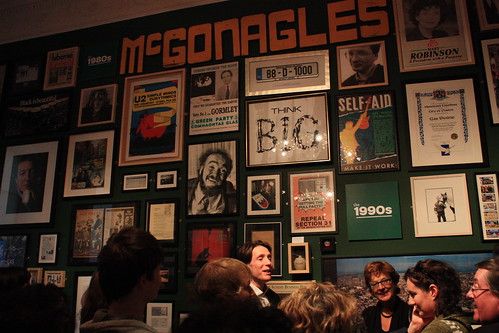 You know, it JUST occurred to me that this is creepy behavior on my part. Very creepy.

I suspect we would have stood there quietly while he read a phone book, pausing only to run his hand through his hair every now and then. Which is why I have trouble writing about the Little Museum of Dublin objectively.

I mean, I loved it. I thought it was absolutely delightful and unique. But I’m not entirely sure other people would. Rand, I suspect, would get less of a kick out of it than I did. And I think it’s pretty safe to say that if you hated Four Weddings and a Funeral, you probably wouldn’t like it at all.

The museum is an intimate look at Ireland – specifically Dublin – over the last century or so (the website notes that it collects “art, photographs, … objects and ephemera relating to … life in Dublin between the years 1900 and 2000.”) It’s prideful, and I mean that in the most positive sense – it is full of things that Dubliners are – and should be – proud of.

The walls are packed. 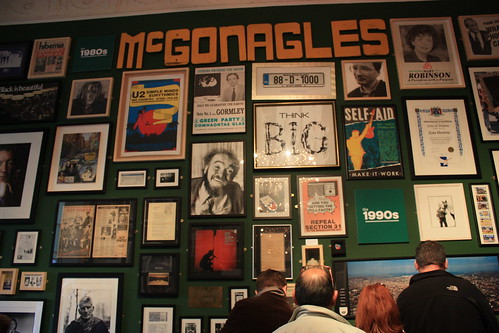 Some things are easily decipherable. It’s easy to see not only what they are, but how they relate to Dublin. The newspaper announcing Eamon DeValera’s death. An autographed copy of a U2 album. A photo of Samuel Beckett. 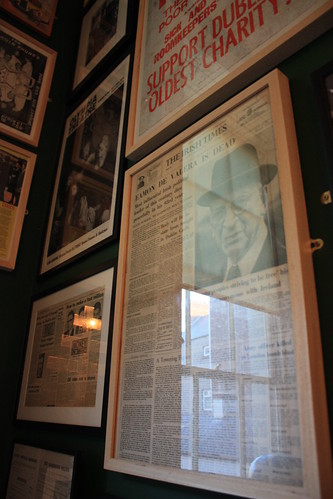 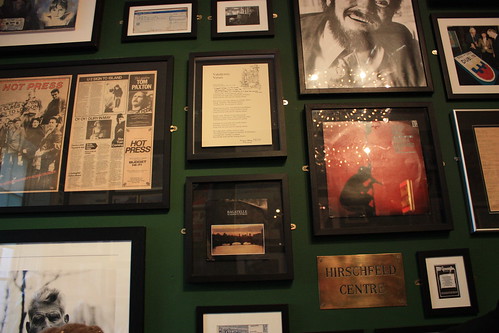 But without a guide, it would be a struggle for any foreigner to appreciate the significance of the collection. There are no placards, no velvet ropes, no audio guides. That’s part of the beauty of it. It feels like you are in someone’s home, and indeed, many of the objects in the museum are personal items donated by Dubliners. 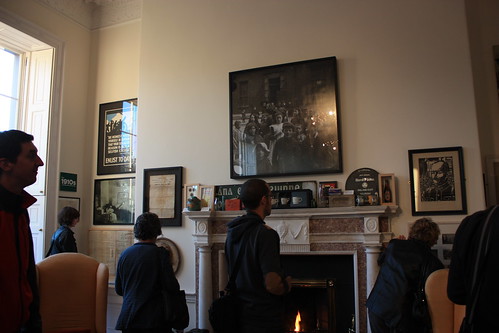 And the history they carry is not insignificant. Nor does it merely pertain to just Dublin. This music stand was in the middle of the room, unassuming and unprotected. Numerous people ran their hands across it, and I figured it was designed or manufactured locally. 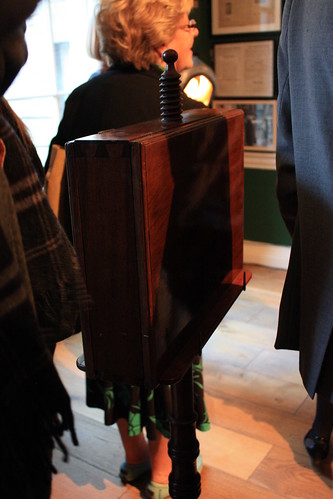 I even used it as a tripod for my camera, in order to get a few still shots. A recollection that is making me wince even as I type this because … oh, dear. That was no ordinary music stand. John F. Kennedy used it as a podium when he addressed the Irish Parliament in June, 1963.

The story was that Kennedy had requested a podium, but since the Irish politicians of the day were not in the habit of speaking from lecterns, one was not available. There was a bit of a panic, and finally someone managed to procure a music stand ( borrowed from a local family; I had the privilege of learning about the stand’s origins from its current owner – a wonderful story in and of itself). It suited Kennedy just fine.

In this video of Kennedy’s speech to the parliament, you can actually see someone setting up the stand on the right.

The museum also has a note from the president, promising to be back in the spring. He was assassinated just four months later. Incidentally, the music stand was not returned to its owner until after the president had died.

It was just one of dozens of everyday objects whose significance was not discernible without our handsome guide. Considering that, it seems a bit more understandable that I was able to spend so long in the museum, rapt with attention. Everything was tied to the city of Dublin and its people. Every object held some history.

Yes, he was charming, but so is the entire city.

I had lots more to see that night, and so I finally left. I stood on the steps of the museum, trying to figure out what to do next, when my dashing guide appeared in the doorway, to get a bit of air himself. He ran his hand through his floppy hair, and flashed me a smile.

Good heavens, did he expect that to work?

“I AM NOT ONE OF YOUR GREY-HAIRED GROUPIES!” I wanted to shout. But instead I smiled meekly, my pond unrippled (or whatever the hell that analogy was that I started off with) and returned to my map.

I spent the rest of the evening wandering from museum to museum. Dublin, I’ve found, is an easy town to love. But at no place was the city’s rich and interesting past recounted with such a delicate and personal touch as it was in the Little Museum. If you visit, you may find that your heart, like mine, will quicken its pace. You may end up dizzy and swooning, just a little bit. And at some point, you’ll realize, it has absolutely nothing to do with the tour guide.

The Essentials on The Little Museum of Dublin: