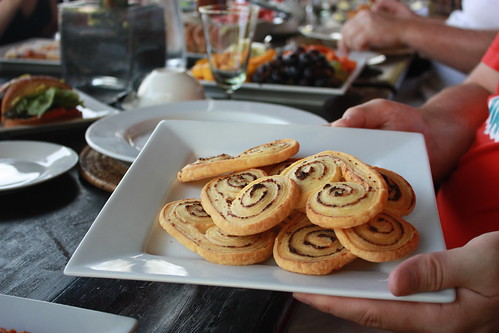 Palmiers served during tea time at the Kloof.

We first arrived at Bushman’s Kloof in the late afternoon. It had been an absurdly hot day, and the sun was now inching back towards the horizon. It was the sort of weather that makes you swear that you will never eat anything again that isn’t presented to you in popsicle form.

Still, when our lodge manager, Malcolm, explained that most people chose to do high tea instead of lunch, I felt my finger begin to wave in protest, an “OH HELL NO” forming on my lips. Bushman’s Kloof was all-inclusive. I wasn’t about to have them save money by serving me a stale scone and a cup of tea at 2 o’clock and expect that it would tide me over until dinnertime.

That, of course, was before we had tea at the Kloof. And before I realized that this wasn’t the sort of place where they cut corners. Except, perhaps, if you requested that corners be cut (specifically, off of your finger sandwiches).

Our first high tea was at the Koro Lodge. Like I mentioned in an earlier post, most of our group was staying up there (Rand and I were at the main lodge, and poor Kurtis and Courtney were stuck down there with us). 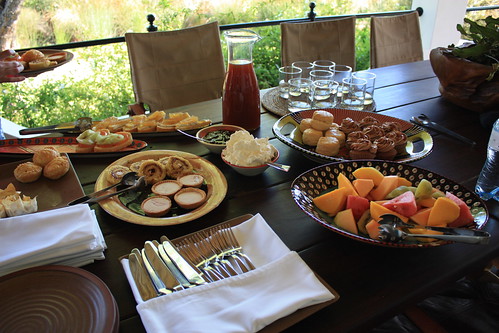 We sat, eating our treats around the pool while Malcolm poured us champagne. 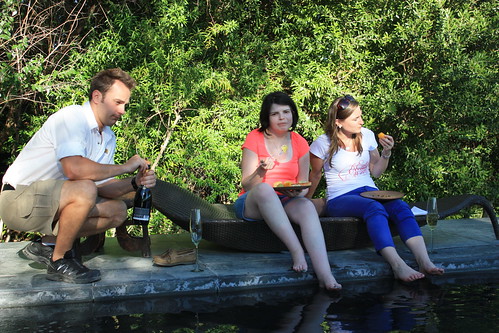 I will simply say this about that first high tea: if the earth had decided to split open at precisely that moment and swallow me up whole, I wouldn’t have complained all that much. I’d have ended on a high note.

And in the subsequent days, our afternoon meals seemed to just get better and better.

On another day we ate at the Makana restaurant at the main lodge. Three walls of it were open, and we sat in the shade and listened to the chirping of birds. 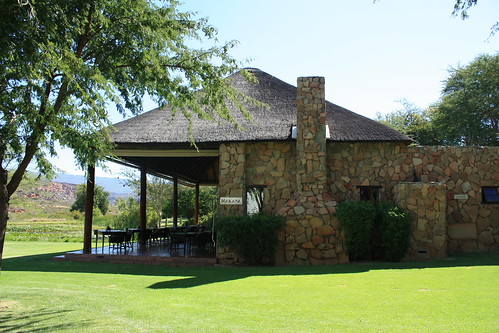 “Alright, shall we have some tea?” Malcolm would ask us each day, and we’d all screech “YES” as though answering a long overdue wedding proposal.

See, the thing about having afternoon tea, the thing I didn’t realize for a very long time (even after several visits to the U.K.), is this: you get way, waaay more than just tea. 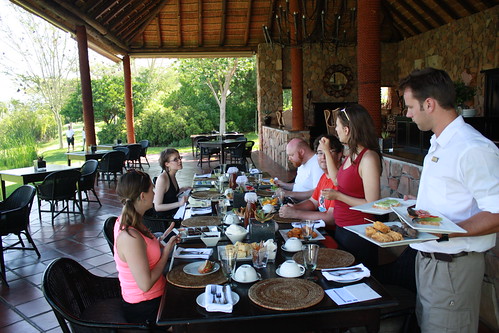 And some homemade marshmallows and sunflower seed brittle. 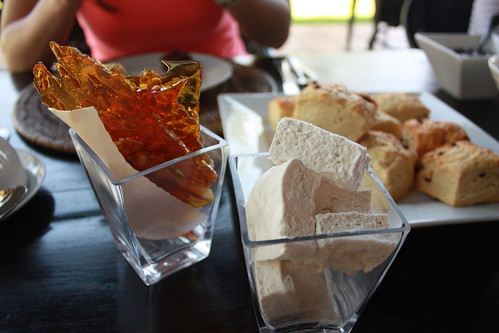 It seems worthy to note that when the sun hits the brittle just right, it looks like stained glass: 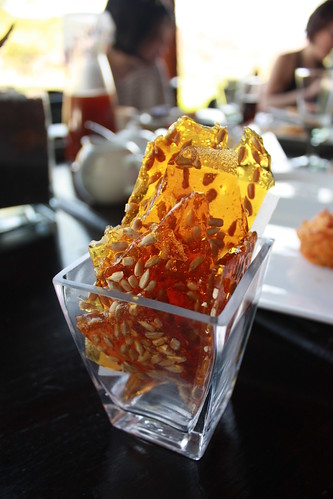 Oh, and I guess we’ll have a marzipan covered cake or four. What’s that? There’s raspberry filling inside? Sigh. Okay. I mean, if you insist. 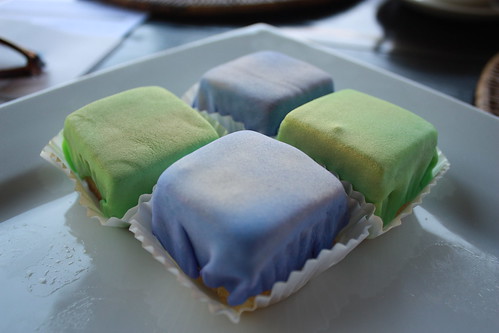 And some cheesy biscuits … 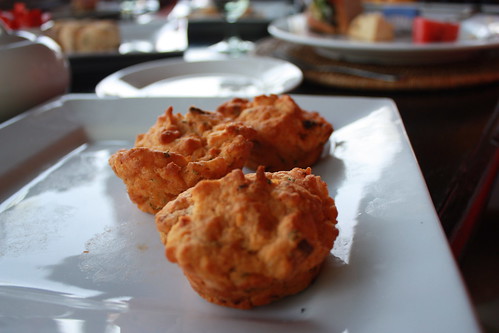 You know what? We’ll just take all of it. 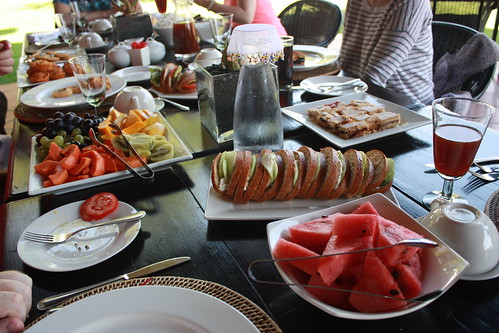 I love my expression in this photo, because you can see that I am trying to figure out how to eat all the things: 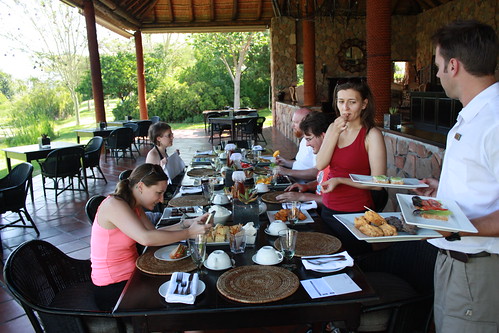 But my favorite tea time was the one we had under the giant tree. Even as I look at the photos, it doesn’t seem real to me. It looks like something I half-fabricated, pulled in part from my imperfect memory and partly from Indiana Jones. And with a dash of every treehouse you dreamed about as a child, just for good measure. 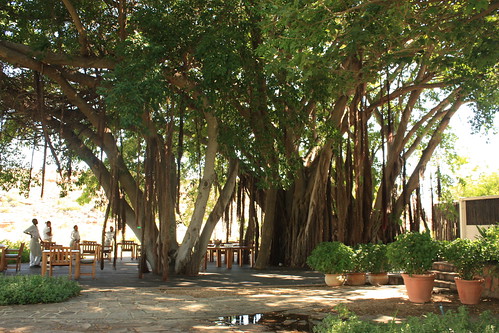 On one of our last afternoons at the Kloof, we ate under that tree. 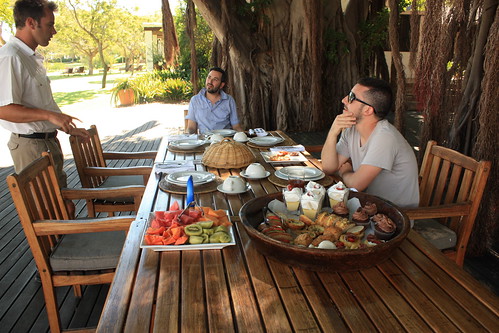 Rand and Justin talk to Malcolm.

There were cakes and sandwiches and lemon meringues and the best macarons I have ever had in my life. 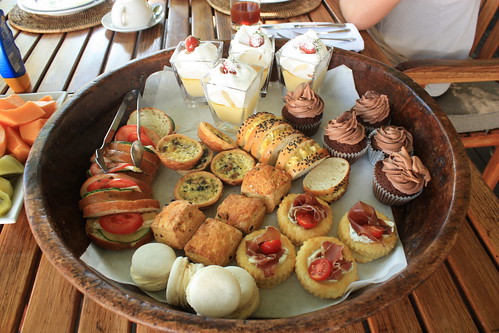 Under that tree, as we had our tea, someone took this photo. I’m don’t quite remember who (it isn’t Rand, since he’s the recipient of my smile). 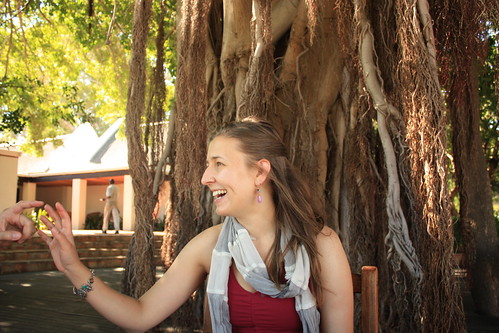 When I first saw this picture, I didn’t really like it. I noticed only my jaw, and saw only the changes in my face (ones that I am not fond of) that have become apparent since my surgery and the cocktail of medications I took during that time. They are silly and subtle and unimportant changes, but they preoccupy more of my thoughts that they ever should.

But then I look at my eyes and the expression on my face, and I realize that I look happier here than I can remember. And I realize how damn lucky I am, how absurdly blissful my life is.

And I think that perhaps I should start having tea more often. But even if I did, I don’t really know how it could compare.