Skip to content
Posted in: Life at Home, Nothing to Do With Travel, Random Musings, WTF Wednesdays

Warning: before writing this post, I spent waaaaay too long listening to NPR, after which I devoured some poetry, and then chased the whole thing with a few swings of prose. The result is … whatever the heck is going on below. It has nothing to do with travel. Sorry.

Rand and I have a shower in our bedroom.

I mean, in our bedroom. Not in a bathroom in the bedroom. No. It is IN the room. At the end of the bed. 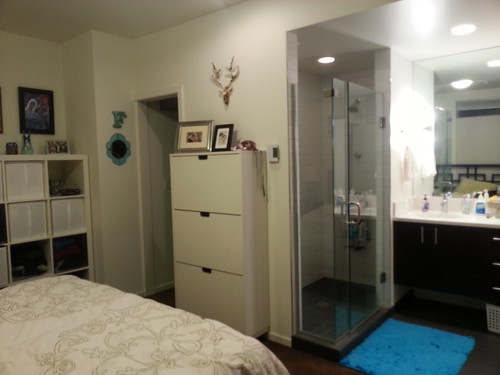 Pictured: the end of our bed, and our shower.

It’s about as ridiculous as it sounds. In the two years that we’ve lived here, we can’t really make sense of it. The doors are glass, so you have absolutely zero privacy if someone is in the room. When one of us has to wake up early for whatever reason, we’ll shower with the lights off, so that we don’t wake the other person.

Have you ever showered in the dark? It’s really weird, and yet strangely familiar. I’m pretty sure it has to do with some pre-memory of being in the womb.

And then I start to feel guilty for not having called my mother in a while.

So this shower sits in the middle of our bedroom, and when we show guests around, they always comment on it. Some find it sexy. Others declare it bad architectural planning.

My biggest complaint is that the glass doors mean I have to keep my shower ridiculously clean at all times. If it’s dirty, everyone will see it. So after every shower, I wipe the droplets off the doors. Every. single. time. 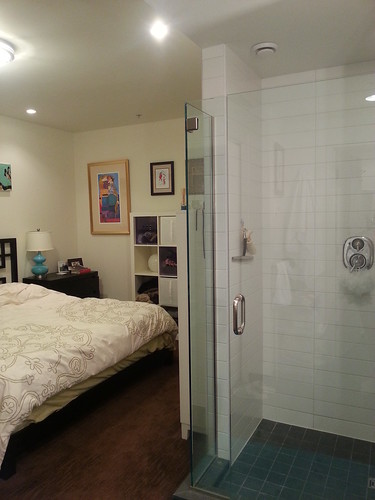 If you look closely at the reflection in the door, you will see I am standing in a pile of dirty laundry.

The other day, I was had just finished showering in that spotless glass coffin. In order to save you the mental image of me naked, let’s just pretend I was wearing an old-timey bathing suit, okay? The kind that reaches your elbows and knees.

Rand had gotten ready before me, and was now busy getting dressed. He looked over at me, through the droplets that streaked the doors like rain on a car window (parenthetically, remind me never to drive while wearing only a shower cap).

I melodramatically reached out a hand towards him. He laughed.

“I feel like something’s come between us,” he said.

I gently pushed open the glass door in response, and in the recesses of my brain, I remembered a portion of an Emily Dickinson poem that I committed to memory when I was 16.

And I stood, in my shower cap and old-timey bathing suit, and recited it to him as he looked at me, somewhat baffled.

And were you saved,
And I condemned to be
Where you were not,
That self were hell to me.

So we must keep apart,
You there, I here,
With just the door ajar
That oceans are,
And prayer,
And that pale sustenance,
Despair!

He stared at me, incredulous, and asked, “What was that?”

In reply I merely smiled, ridiculously pleased with myself. And then I began wiping the water droplets from the glass doors, like I always do.