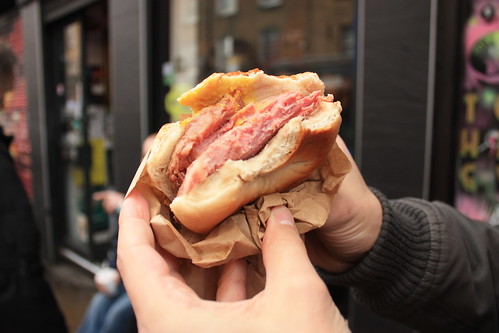 Do you remember the interstitial sketch from Monty Python where John Cleese would say, “And now for something completely different?”

That seems like the perfect way to start off today’s post. Because today I am moving away from South Africa to tell you about the few brief days we spent in London. And I am not going to talk about the very important but nevertheless depressing things that I have talked about for the last few weeks. No mention of rape, or murder, or bombings, or anything like that.

No. Today’s post will about something completely different: bagels.

These weren’t ordinary bagels, though. They weren’t even spelled normally.

Rand and I found ourselves in Brick Lane on a rainy Sunday. We’d just come from the Columbia Road Flower market and started walking, with no real idea where we were going, and that’s where we ended up. 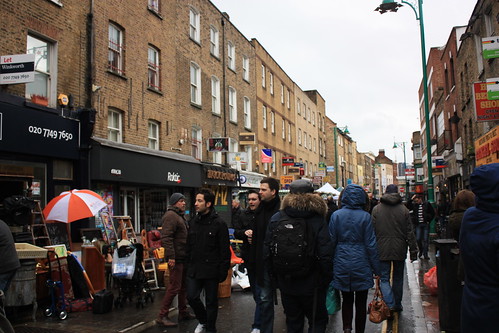 The neighborhood feels a little like Brooklyn – it’s quirky and hip, with narrow alleyways and buildings constructed from – what else? – dark red bricks. Despite all our visits to London (we must be nearing a dozen now), we’d never been in this part of town. 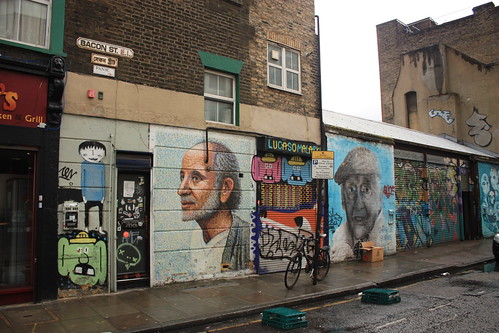 There were murals all over the place.

We strolled, impervious to the rain (it’s one of the few superpowers granted to those who live in the northwest), passing shop after shop selling bagels, advertising them with the rarely-seen alternate spelling of “beigels.” Some of the signs made me giggle, because I am secretly 12 years old. 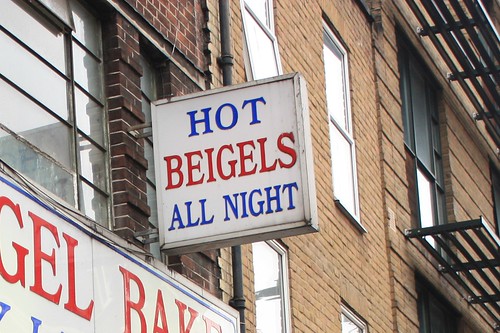 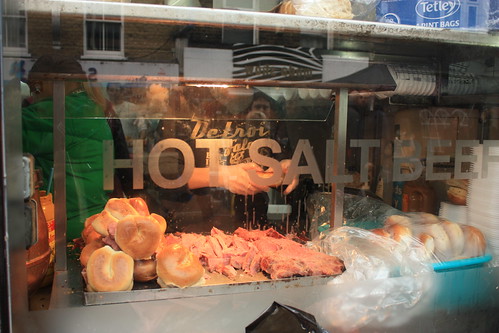 I mean, come on: everything said “HOT SALT BEEF ALL NIGHT” in giant letters. I couldn’t not laugh at that, people. I’m not made of stone.

Rand noticed a large line gathered outside one of the shops – the very alliteratively named Beigel Bake Brick Lane Bakery –  and gravitated towards it. 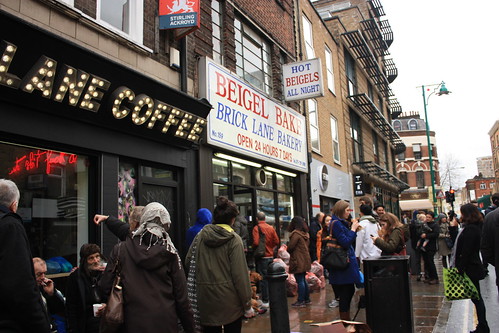 “I need to check that out,” he said, and promptly got in line.

The place seemed to sell only one thing – fresh bagels, sliced open and filled with “hot salt beef” (which turned out to be what we would call corned beef. If that’s something you’ve never had, think of it as being like pastrami, but moister, sliced thickly, and minus spices like peppercorn), and a slap of tangy yellow mustard.

(Note: further research suggests they also serve cream cheese and lox on their beigels, but the salt beef seems to be their most popular seller.)

A few minutes later, he emerged, bagel in hand.

It wasn’t entirely dissimilar to a New York bagel, though there were differences. The center hole was virtually non-existent, and the bagel looked softer and lighter. More like a very fresh roll.

“Oh, my god,” he muttered, in such a tone that I was unable to tell if his reaction was positive or negative.

“What? Oh-my-god good or oh-my-god terrible?”

“This … this might be the best bagel I’ve ever had.” 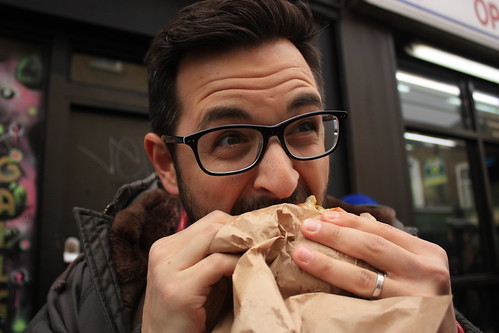 Rand took a bite. And then he took another. And another.

I ripped it from his hands and examined it. Theoretically, I should have hated it. I take my bagels with cream cheese and some smoked salmon; they are not to be used as sandwich bread, ever. I didn’t know what hot salt beef was at the moment, but was fairly certain I wouldn’t like it. And I generally hate yellow mustard.

But … the best bagel my Jersey-born husband had ever had? I had to take a bite.

And … holy cats, you guys. The bread was soft and chewy and absurdly fresh, but the exterior had a nice sheen and a bit of resistance. The meat was moist but not soggy, flavorful, and the tangy mustard cut into it perfectly.

I took another bite, before relinquishing it to my husband.  The line out the front now made perfect sense.

Maybe. I don’t know. Like I said, bagels, for me, are best served with a light smear of cream cheese, and a bit of ice cold lox on top. This sandwich of his absurdly good – that was indisputable. But was it a bagel? 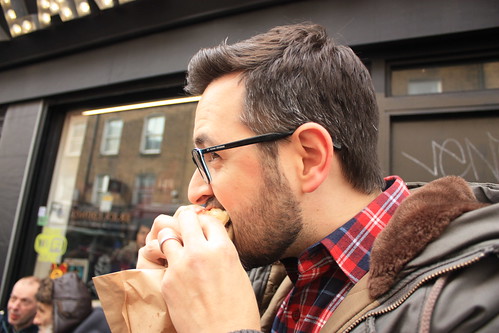 I’d have to say no. It was something completely different. But still pretty damn great.