Skip to content
Posted in: Life at Home, Nothing to Do With Travel, Random Musings, WTF, WTF Wednesdays 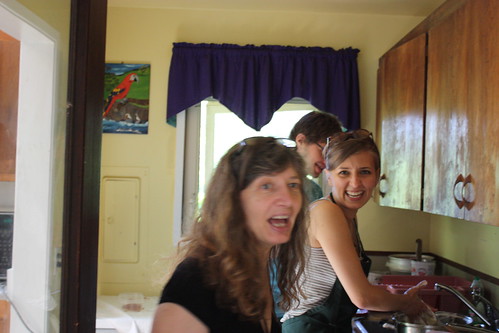 I know this picture is blurry, but it’s still kind of magical. My mom was angry because I was doing dishes in her house.

Please don’t read this post, okay? No, no, it’s not because I talk about how crazy you are. Sheesh, mom … Yes, I know you aren’t crazy. Yes, I realize I make you out to be crazier than you actually are on the blog. The reason I don’t want you to read this post is because it’s about your Mother’s Day gift. We don’t want to ruin the surprise, right? Of course we don’t.

Good. Because, you guys, I need to tell you how crazy my mom is. I mean in conjunction with telling you about what I’m getting her for Mother’s Day, so it’s not a total lie.

Here’s the thing about my mom: she is very, very easy to shop for. This is because she doesn’t have all sorts of useful, everyday objects that normal people have in their home, and she flat-out refuses to buy them for herself (her reasoning: “They’ll just get ruined.”). I could get her a new cutting board, or a roll of tape, or a pair of pajamas, or basically anything anyone would ever need, ever, and she will just be tickled.

Last time I was over at her house, I needed to borrow a tiny pair of scissors. My mother returned with – I kid you not – one of those semi-circular metal dentist picks.

“I don’t know where my scissors are,” she replied.

Of course. Yes. When I lose something practical, I, too, like to use professional dental tools in lieu of it.

“Honey, have you seen my screwdriver? No? Well, just hand me that tank of nitrous oxide.”

When I was a kid, we never had a pencil sharpener in the house (I’d buy one for school, and it would vaporize within minutes of crossing the threshold of our home. It was like someone put a curse on our house that nothing useful would ever be able to enter it. I suspect that this might have extended to people, too). So my mother would pull out a paring knife and hack that poor pencil into some misshapen abomination of a point. The next day at school I’d rush to the sharpener in a desperate attempt to erase all evidence of the butchery that had happened the night before.

Sometimes, I’d succeed. Other days the deep grooves would remain through sharpening after sharpening, lingering evidence of my own personal shame. (Parenthetically, it amazes me the stuff that I thought was important in elementary school.)

But damn it, she tried. She’s always tried to help, even if she never, ever, EVER has anything even close to the right tools for the job. It’s easy to criticize, but at the end of the day, it’s hard to be angry about it. She’s my mom. I owe her. I mean, this is a woman who saw me EMERGE FROM HER OWN VAGINA, and she still talks to me.

And after said vagina-emerging, she let me snack on her boobs for, like, a year. And she rarely brings it up in order to win arguments.

Hell, she actually seems to enjoy my company, which is something she has in common with approximately one other person on this entire planet. That’s love, you guys. Pure and simple. 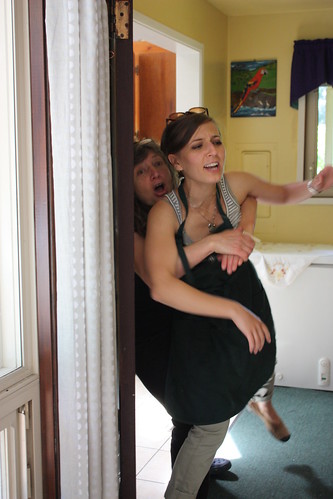 Here’s a photo of her throwing me out of her kitchen because she didn’t want me to do any more work. She’s yelling “GO.”

So in thanks for all of this, I am pleased to say that I know exactly what to get her for Mother’s Day.

It began with a trip to IKEA. A few months back, I took my mother there. If you haven’t been the the Swedish home megastore, it is where many relationships meet their end. Rand and I have seen some desperate times inside that windowless blue and yellow dungeon. So taking my mom there was, knowingly, a risky venture.

Nor does it help that she has the attention span of a fruit fly.

But I knew was I was in for. I’d gone there before with her in tow. On that ill-fated trip, I saw a bookshelf I wanted. IKEA keeps all of its furniture unassembled in boxes, so if you see something on display that you like, you usually have to write down the aisle number and go find it in a massive warehouse at the end of the store. (After which, you will have to spend several long years assembling it. But that is another story). I saw the bookshelf about 20 feet away from me.

“Mom, I need to go write down where that bookshelf is located.”

“No, mom, I need to go over there. So I need you to stay here, okay? It’s really easy to get lost in this place.”

“Stay right here with the cart. I’m going to be right back.”

What happened next, as best as I can understand, is that my mother waited until I turned my back on her, and proceeded to run, frantically, in the opposite direction as quickly as she could.  I was gone a total of 30 seconds, but when I got back to our cart there was not a trace of her.

I thought for a second she might have been raptured, but then realized that was impossible because she loves leopard print and the gays waaay too much.

I frantically looked around for her (my cell phone didn’t have reception in the abyss that is IKEA, so there was no hope of calling), and after 20 long stressed out minutes during which I contemplated just leaving her there because, seriously, WHAT IN THE ACTUAL FUCK, MOM, I was gone for like 30 SECONDS AND I TOLD YOU NOT TO GO ANYWHERE, a voice came over the loudspeaker.

“Would customer Geraldine De-garble-garble please come to the Service Desk near the storeroom? Your party is waiting for you.”

That’s right: she had me paged. LIKE I WAS THE ONE WHO HAD GOTTEN LOST. So I stormed off to meet her, and when she saw me she was just gently shaking her head.

“Where did you go?” she asked.

Because, you know, I’m the crazy one.

On our next trip to the IKEA, having learned my lesson, I decided to take a different tactic. I threaded my mom’s purse to the cart, so she couldn’t run off, and told her that if she behaved, I’d buy her a present.

I know some of you are probably scandalized by this role-reversal, but whatever. It totally worked. I actually ended up buying her a crapload of stuff (all of it totaled something like $2.99 because IKEA is magical like that. Good thing, too, because my mom thinks that anyone spending any about of money on her is too much), and most of it fell into that category of practical stuff that my mother never has in her home, so we both felt quite good about it. I think she got about a half dozen toilet brushes, which is amazing, because she only has three bathrooms.

Plus, she only ran off once. We were near the closet section, and I turned to ask her something and found that she managed to untangle her purse from the cart and make a break for it.

“Damn it.” I muttered. Next time: bike lock.

I finally found my mother standing on one of the many raised displays throughout the store, trying on a pair of rubber rain boots.

“Honey,” she said, “I think I want to get these. I’ve been needing a pair of rain boots.”

“That great mom, but you really need to get down from there and … wait, where did you get those boots?”

“They were just sitting up here. I want them.”

“Mom, those boots are – oh, good god – THOSE ARE PART OF THE DISPLAY.”

“So it means you can’t buy them. Please get down from there.”

“No, I think I can. They were just sitting here.”

“Mother, please get down from there and take those boots off. They are not for sale.”

At my insistence, she finally stepped down and took the boots off. Sure enough, there was a huge sticker on the bottom that read, “FOR DISPLAY ONLY. NOT FOR SALE.”

“See?” I said, pointing to label. My mother was now pouting.

“But I wanted them.”

A lady who had seen the entire exchange chimed in. “They looked really nice.”

“STOP ENCOURAGING HER,” I hissed, and then led my mother away before she could start eating wax fruit.

Anyway, the point is, I’m going to buy my mom a pair of rubber rain boots for Mother’s Day (I’m thinking of going with these). And also a pencil sharpener. And a tiny pair of scissors. She’s going to say I spent too much. Whatever. She’s my mom and, crazy or not, she deserves it. 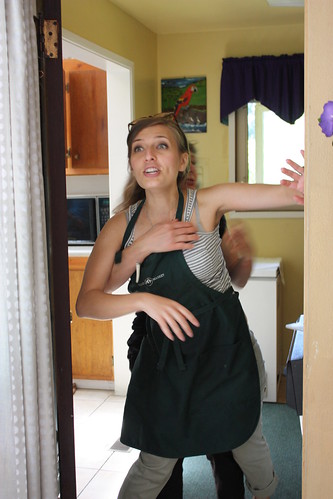 Also, she’s freakishly strong for her size. Despite my efforts, I could not stay in that damn kitchen.

Family, Mom, Nothing to Do With Travel, WTF Wednesday