Today’s post is the exciting conclusion of our snorkeling adventures on the Outer Reef. Don’t forget to read Part 1. 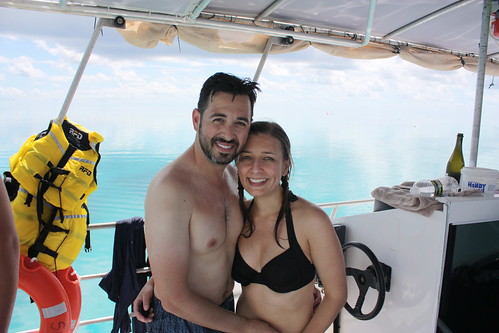 I should have warned you there’d be photos of us in bathing suits, huh?

Our seaplane had just landed in the middle of the Great Barrier Reef. Remembering how often lofty expectations led to disappointment, I did my best to calm my brain, which was racing with thoughts of everything we were going to see.

“THERE WILL THOUSANDS OF FISH,” it screamed. “AND SEA TURTLES! AND ALSO KITTENS.”

I shook my head, trying to clear it. While it was almost certainly guaranteed that we’d see fish, I had no evidence (aside from Finding Nemo) that there would be any sea turtles swimming around. And numerous online searches have confirmed the fact that kittens are not indigenous to the Great Barrier Reef.

“Whatever happens, happens,” I told myself. “Even if the water is murky, and I don’t see too many fish, I won’t mind. This has already been an awesome experience.”

And that was true. The flight out to the reef was wonderful. If the high point of the day – or even the trip – had already passed, I was okay with that.

But the day kept getting better.

The seaplane gently coasted on the water, and pulled up to the glass-bottomed boat. The water and the sky seemed to blend together. It was hard to tell where one ended and the other began. 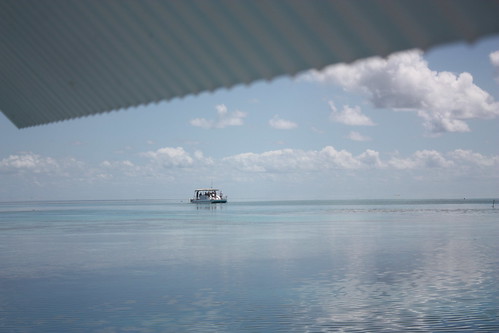 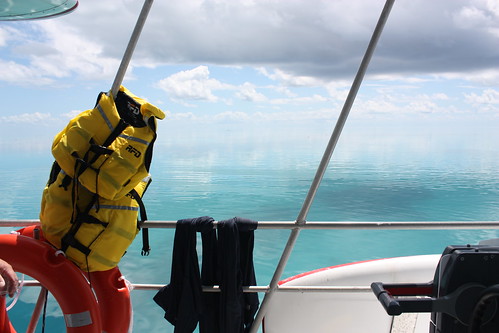 Already aboard was a group of tourists who were lounging around in the sun, drinking cocktails and chatting with one another in French.

There were part of an all-day tour, and it was hard not to envy them.

“You are stupidly lucky to be out here in the first place,” I reminded myself. “Also, cocktails and lying in the sun gives you a headache.”

The ship’s captain gave us a rundown of how things would go. We’d have an hour to snorkel the reef. He outlined the areas that were safe – where the water was deep enough that we could safely swim, and asked that we keep a minimum of 1-2 meters from the coral. He noted that this was more for our safety that anything else: odds are the coral would be fine if we bumped into it, but we’d get torn up.

After a few minutes spent putting on our dry suits, our snorkels, and our fins, we were in the water.

I know what you are thinking: her expensive, fancy pants camera isn’t waterproof. And you’d be exactly right. Fortunately, the camera I rented from the resort was: 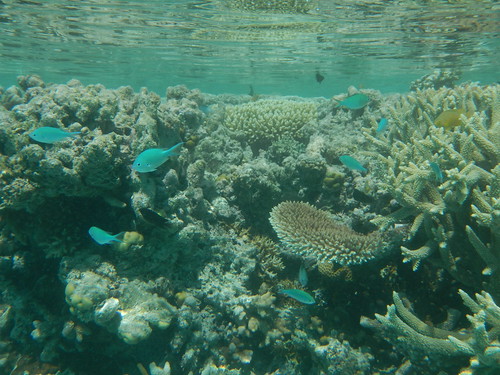 Above the water, you only get a hint of what’s underneath. You peer down, and try to make sense of the shapes and colors, but the slightest wind ripples the surface, and it’s all lost. But the second you plunge in, you can see all of it clearly – a bustling world that shimmers and floats and changes direction in a second. It’s soundless and infinite.

And it is ridiculously, absurdly beautiful. 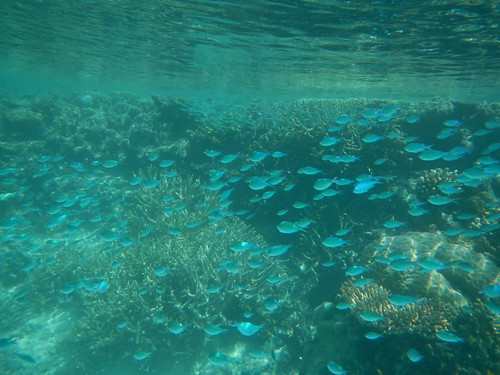 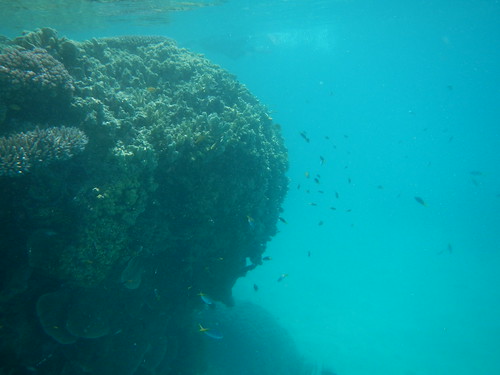 The coral looms out in front of you like giant mutant cauliflower. It stops just abruptly just below the water. 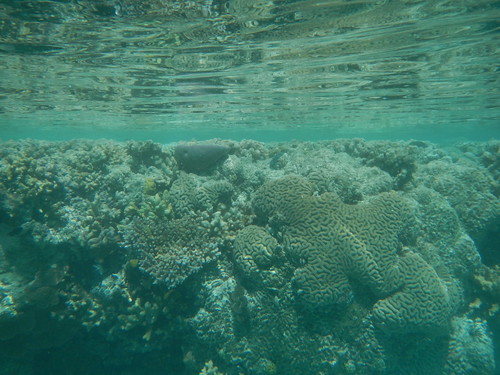 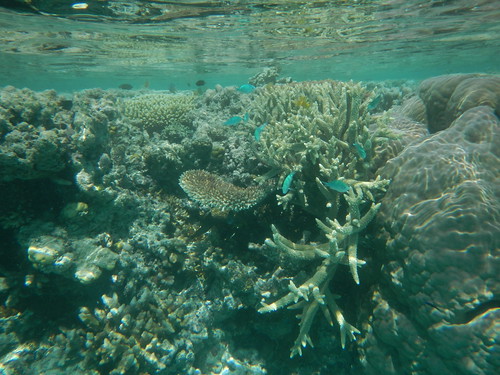 The water was warm, but not overly so. It was cool enough to be refreshing, and to ensure that we wouldn’t overheat after an hour of swimming. There were floating pontoons every now and then, so if we got tired, we could rest on one. I stopped on one only once, to readjust my mask. Curiosity and wonder trump exhaustion every time.

I tried to take a video of it all, but, forgive me, it’s jittery as heck. That’s the problem when you are trying to use your hand to swim and hold a camera.

The fish were wary of us at first, but after a few minutes in the water, they seemed to accept us. We weren’t one of their own, obviously, but we weren’t going to eat them, either. 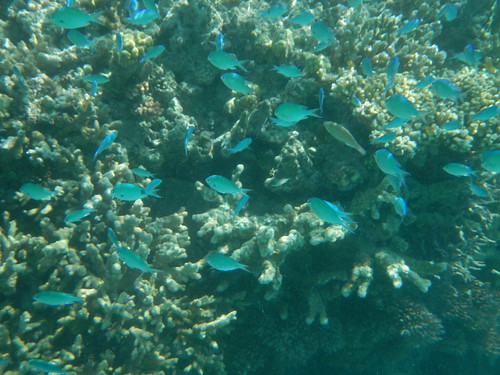 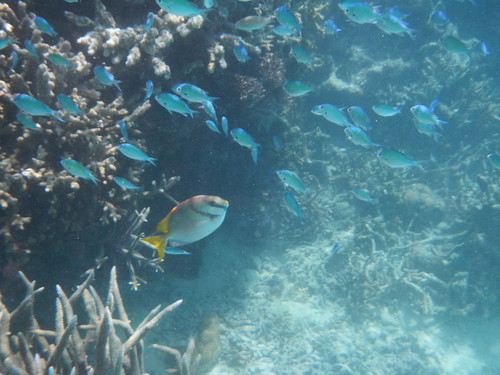 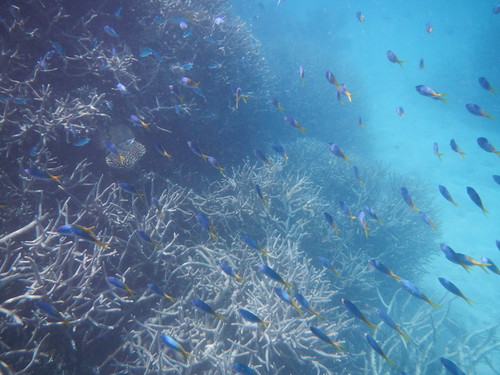 My beloved was there, too: 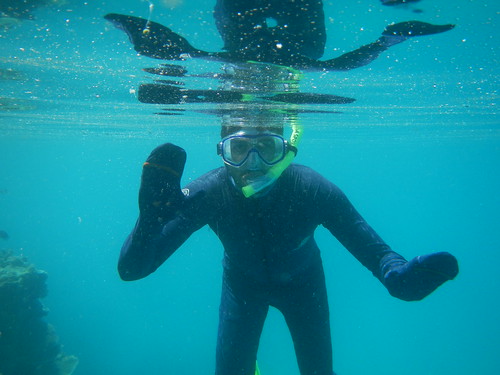 It was everything I could have asked for and more. But that didn’t stop my brain from being demanding.

“WHERE THE HELL ARE THE SEA TURTLES?!” it screamed. 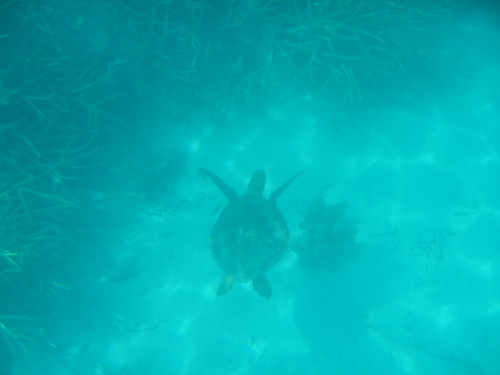 Wanna see a video of it swimming? Of course you do:

The hour flew by. It was one of the shortest of my life. We saw the captain waving to us that our time was up, and we reluctantly swam back. 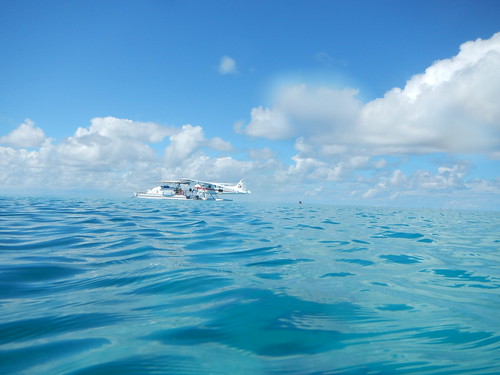 As we climbed back into the plane, Lee explained that he’d need to make a quick stop on one of the islands. Would Rand and I mind if we were dropped off last? No, no we most certainly would not mind an extended seaplane tour of the islands. 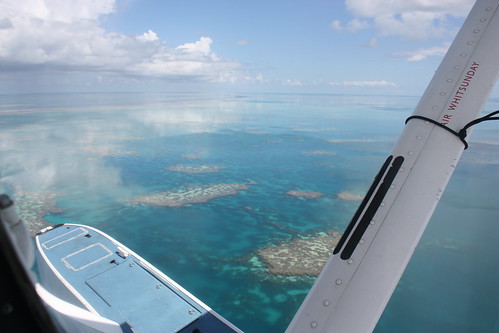 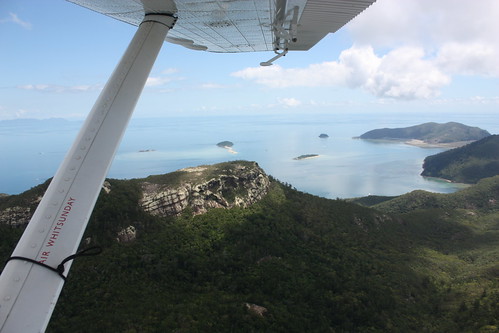 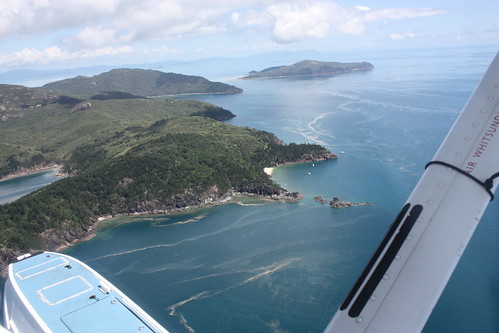 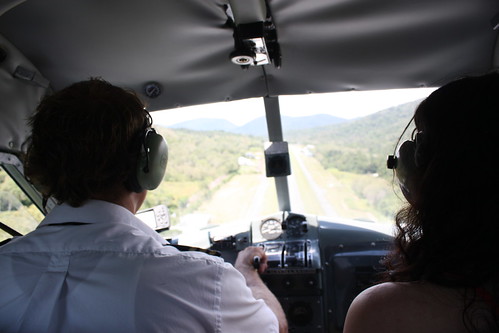 We stopped for a moment at Whitsunday Airport so that Lee could refuel and drop off the other passengers. He treated us to drinks at the airport cafe while we waited. 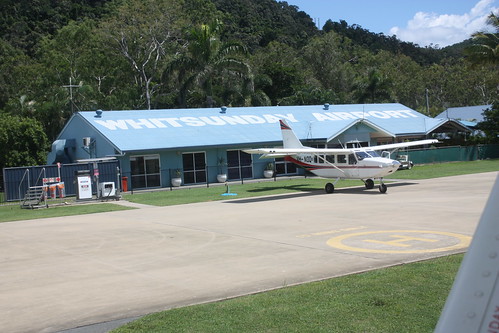 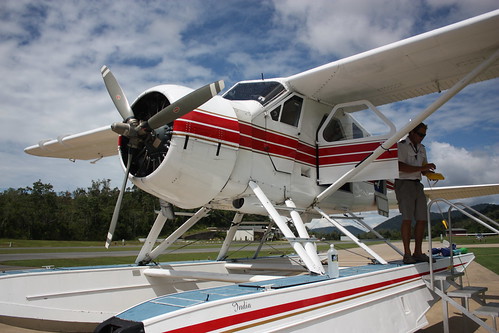 We sat in the shade, sipping fizzy water. 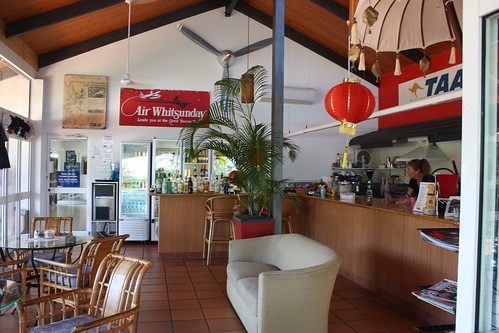 “This place,” Rand said, and didn’t finish the thought. He didn’t need to. I merely nodded in reply. We sat in silence, trying to process it all. Rand had wanted to see the Great Barrier Reef since he was little. He’d had ridiculously high expectations. I’d had very few. And we both were equally blown away.

Reasonably, what more could I have expected?

A few minutes later, the manager of the cafe walked out, carrying a large box.

“Lunch time!” she said, brightly, though it didn’t seem as though she was talking to us. She placed the box on the floor. Guess what was inside. 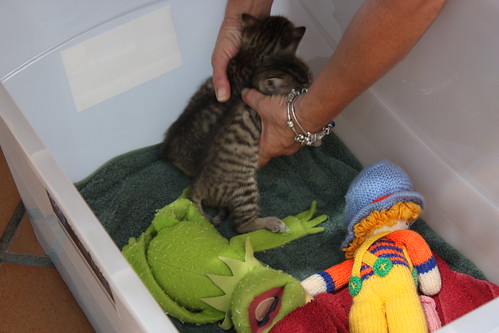 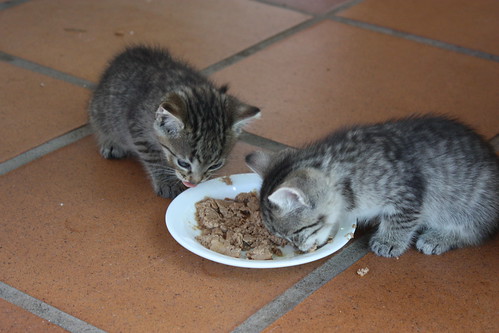 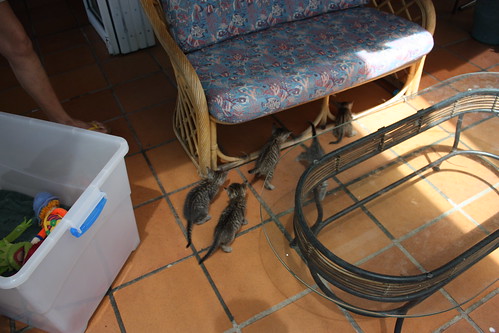 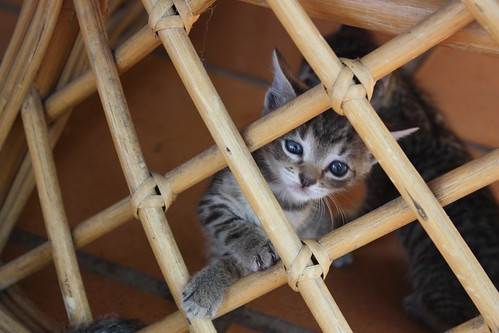