I know I owe you a few stories out of Sydney, but I absolutely have to tell you about something that happened to me – TWICE – in Paris. We’ll get back to Sydney later this week. I promise. 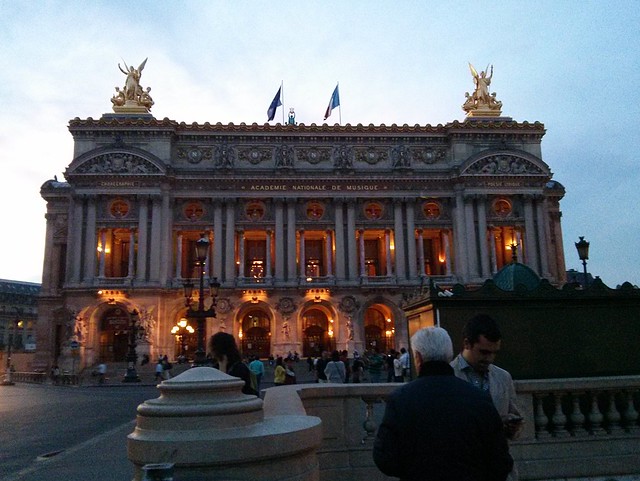 The first time this scam was attempted, I wasn’t far from here.

Remember the movie The Matrix?

Please, please say that you do, and that you weren’t, like, in the womb when the movie premiered, okay? Because I recently had an exchange with the lovely girlfriend of a friend (both of whom are slightly younger than us) and even though I consider us contemporaries, I realized that I saw Jurassic Park in the movie theater as a teenager when she was 2 years old.

I dealt with this revelation in the mature manner, adding a couple of tablespoons of metamucil to my vodka soda and whispering something about how the music was too loud.

Anywho, The Matrix: there’s this part where Trinity talks about the difference between how Neo sees himself (in the Matrix world) and what he really looks like. It touches on the nature of self-image, and how sometimes, there is a large delta between how we see ourselves, and how the rest of the world sees us.

I tend to think of myself as looking fairly cosmopolitan. That I blend into a city, especially when we’re in Central Europe. If I ever go anywhere without my massive camera, I get asked for directions, having been mistaken for a local. And even when I do have my camera, it’s not like I’m an easy mark, right? I mean, no one would look at me and think, “That girl looks easy to rob.”

But in Paris, I realized that’s a bunch of hooey. Someone might as well have put a sign on my back noting that I was a tourist with an expensive camera and no idea where her hotel was. Because no less than two people saw me and felt that it was appropriate to try to pull a scam on me. And it was the same scam – the gold ring scam.

Apparently it’s a popular one in France – there are posts about it on Trip Advisor, and on countless blogs. It’s fairly simple, and even now, I wonder if there isn’t more to it.

The first time it happened, I was by myself near the Palais Garnier Opera House in the 9th arrondissement. I was a few blocks from our hotel, but nevertheless hopelessly lost. I needed to pull out my map. Doing so always freaks me out, because it makes it painfully obvious to anyone within a block radius that you are not only a tourist, but a clueless one to boot. Plus, it involves opening up my purse.

I found a corner where the facade of a restaurant jutted out slightly from the storefront next to it, pressed my back against it, so I could stand comfortably, without worry that anyone would sneak up on me. I found the street I was on, and looked at the tiny little rues that burst out of it like rays of the sun on a child’s drawing. My hotel was on one of them but … good heavens, why was the print so small? Don’t mapmakers realize that those of us who get lost also tend to lose their glasses?

As I squinted at the map a pair of men walked by, and one of them stooped to pick something up in front of me.

Weird. I didn’t notice anything on the ground, and I tend to look (I’m constantly looking out for pooh).

He held it up to me. It was a men’s wedding band, simple and gold.

“Is this yours?” he asked in French.

Reflexively, my hands slapped down on my purse and camera. This happens every time a stranger tries to talk to me in a foreign city: my heartbeat quickens, and I’m convinced I’m about to be robbed. It isn’t because I’m savvy – it’s because I’m paranoid as hell. I shook my head, wide eyed, my back against the building behind me.

“NO,” I said firmly, clutching my things and staring at the ring.

He shrugged, saying something like, “I guess I’ll keep it then” to his friend, and the two of them walked off.

In those brief moments, a million things went through my head. I wondered if it could have been Rand’s wedding ring. No, that was impossible. Rand’s ring isn’t gold.

I then thought of all the men I knew who had legitimately lost their wedding rings while playing with their kids or doing chores around the house, and how sad they’d been about it. I imagined a poor pair of elderly tourists walking through the city and one of them realizing that the gold band they’d worn for 40 years had somehow slipped off their finger. Maybe I should have told the man who’d found the ring to go to the authorities? Or taken it from him and offered to go myself.

But he’d never have believed me in the case of the latter.

Besides, I didn’t even know where I was at that moment.

Looking at the map,  I wondered if it could have been a scam. Some sort of distraction or … ? I couldn’t figure it out, so I just focused on figuring out where I was.

I eventually made it back to the hotel, my possessions and a small portion of my sanity still intact.

I told Rand about my day, and I mentioned the ring.

“That was a scam,” he said, matter-of-factly.

“Definitely,” he replied. Rand guessed that it was some sort of pick-pocketing scheme. I wasn’t sure – the guys were well-dressed, and didn’t really seem shifty – but wouldn’t that have been the point? Plus, I realized that I couldn’t remember either of their faces. I’d only seen the ring, held just under my nose. That was odd,  because it meant that the gentleman had to be holding it quite low (I’m short).

The more I considered it, the odder the scenario seemed.

The next day, Rand and I were walking not far from the Eiffel Tower, near the Quai Branley Museum. Though we’d encountered crowds of tourists everywhere, we found ourselves relatively alone as we walked down a narrow, tree-lined promenade. The only other people around were a heavily pregnant woman heading towards us, holding the hand of her small son, who looked to be four or five. She wore a long skirt that touched the ground, and her hair was up in a scarf. I wondered how she wasn’t dying of heat when I noticed her bend down to pick something up off the ground.

She struggled to get up – why the hell was a pregnant woman bending over like that? I’d have helped her had she been closer to us. She straightened up, and as we passed, I saw that she was holding a gold ring out to us.

“No,” I snapped, my hands squeezing tightly around my purse and camera. As we rushed away, I looked at Rand, my jaw hanging open.

My mouth hung open for a while. I’d been hit by the same scam two times in as many days. I realized that I looked like a tourist, but I hadn’t figured I’d been such an easy mark. Just a reminder that how we see ourselves isn’t necessarily how the rest of the world sees us.

Oh, and the next day? Two different people asked me for directions. Go figure.

The Essentials on The Paris Gold Ring Scam: