I mean physically (though everything else is up for debate).

I spent the weekend in Los Angeles, visiting my wee little nephew, who is, for those of you playing along at home, the cutest person on the face of the planet (even though he screams like an 1800’s dental patient whenever one of his parents leaves the room). 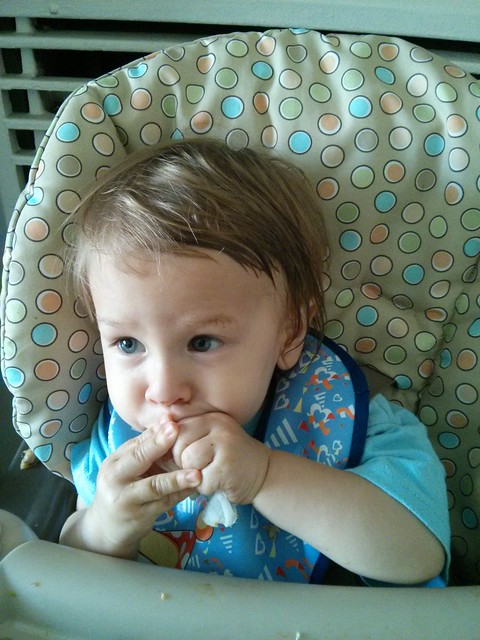 Here he is eating a paper towel after he refused his lunch.

I arrived late on Thursday, and woke up on Friday morning with a wicked cold. I likely passed it on to my brother, his wife, and their child, which would mark the first time ever that a childless aunt was the one to make a child and its parents sick. I’m somewhat ashamed of this.

I got back to Seattle late yesterday afternoon, walked through the airport in a stuffy-headed daze. The setting sun cast a pale orange light on the buildings, and the air was tinged with that bit of coolness that the Northwest can’t seem to shake, even in July. The PA system was playing “Furr” by Blitzen Trapper, and I had that moment of contentment I get whenever I first arrive home.

It’s a fleeting feeling, but for a few moments, I remember how wonderful this town is, and why I’d never want to live anywhere else.

When my cab pulled up to the house, Rand was standing there – pure coincidence, as he had been taking out the trash and spotted us.

He smiled and kissed me.

He took my bag, and we went inside. We ordered Thai food and watched TV on the couch together, and later, when I curled up in bed, miserable and stuffy headed, he told me about his weekend.

(There was a brief exchange in which Rand explained to me who Mark was.)

Me: Wait, is that the guy who looks like an eggplant?

Me: His head looks just like an eggplant, right?

Me: Right? His name’s Mark?

Me: Oh … I thought his name was Eggplant.

For some reason, that last remark made my husband laugh until he cried.

I missed him, too. Let’s hope I don’t make him sick.