I have this impression of the French (which I realize is overly generalizing and stereotypical and patently unfair) that they’re all rather beautiful and dramatic and madly in love, and at the same time, miserably bored.

Like, “Luc, I love you desperately and I can’t live without you, but I think my husband just found out about us, which wouldn’t be a problem except that he’s your son and … sigh. Pass the remote.”

I find it all pretty fascinating, because my family is Italian, which means they’re pretty much the same, except instead of boredom, Italians have mopeds and pasta and lots and lots of screaming. But the drama and the beauty and the passionate love affairs? That’s all there. Totally.

But perhaps that measure of boredom that I’ve (mostly likely inaccurately) attributed to the French is a good thing, because it helps temper all that drama, and makes things like this possible: 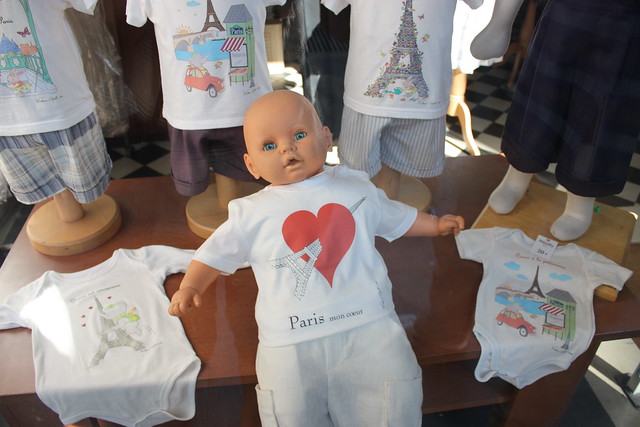 If you are playing along at home, and are a little confused, fear not: I was, too. This was the display in a children’s boutique window. To the best of my understanding, a baby doll has been used as a clothing mannequin, and has been sort of abandoned on a table. Oh, and the Eiffel Tower is rather brutally impaling a heart.

It’s the sort of thing I can imagine a group of Italians screaming about, because, seriously, THAT IS TOTAL MADNESS AND A LITTLE BIT GHASTLY.

They’d throw up their hands and scream at unholy decibels that the shopkeeper has lost his or her mind. But I suppose the French would just sort of yawn and go on being beautiful, which they’ve somehow managed to turn into a calorie-burning feat.

And I’m thinking that I could use a little more of that in my life.