I’m taking a brief reprieve from my tales of Paris to tell you about a French Bakery … in Vancouver. I’ll get back to the city of light tomorrow. 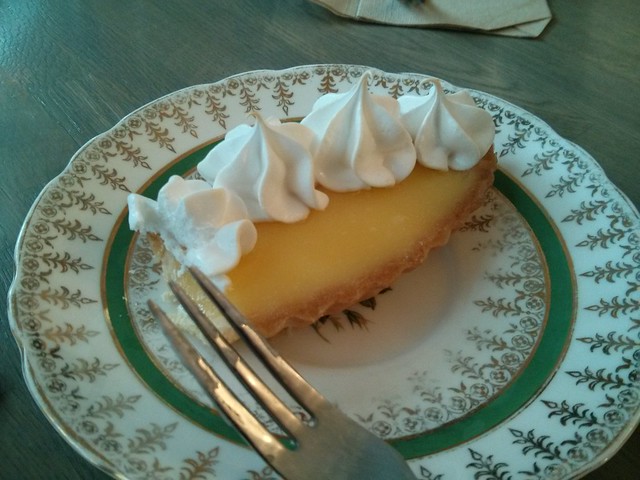 I am standing on a street corner in a dodgy part of Vancouver, British Columbia, on the verge of a hunger-induced meltdown.

I suppose, if I were clearer of head, I’d realize it’s not really his fault. He meant well when he advised Rand and I to head south on Main street. We’d find lots of interesting shops and boutiques, filled with stuff from local designers. Perfect. That’s exactly the sort of thing Rand and I love.

But there was a clear omission of details as to exactly where on Main Street we’d find these shops, and it turned out to be a rather long street. It winds through the city, from trendy Gastown all the way to skid row. We’re somewhere smack dab in the middle of the latter.

Later, Oli will tell us that he clearly said Main Street between 16th and 25th, and I will reply that that’s a fiction of his own design (or perhaps I scream “LIAR!” as loudly as I can in the middle of a nice restaurant. Either way, I get my point across).

Right now, though, we’re in dangerous territory. Not because this is one of the most crime-ridden parts of the city, but because my blood sugar is way too low; the hours of walking have finally caught up with me, and I’m on the verge of having the sort of temper tantrum that would befit a spoiled four-year-old.

I’ve always wondered about the evolutionary explanation for hunger-induced anger (or “hanger”, as is the common portmanteau). Does all this rage make it easier to hunt? If so, any caribou who come through my path is about to get wrecked. Especially if said caribou is made of cookies.

Rand, brilliantly, senses the danger. His ability to diffuse the bomb that is hungry me is nothing short of amazing. Within roughly 90 seconds or so, we are in a cab, having given up on finding the mysterious part of town Oli spoke of, and are on our way to one of Vancouver’s most highly rated bakeries.

Cadeaux Bakery is in the middle of a rather unassuming block on the edge of downtown. Rand and I would likely have missed it entirely, were it not for my ability to spot the word “bakery” written in minuscule font from at least a quarter mile away. 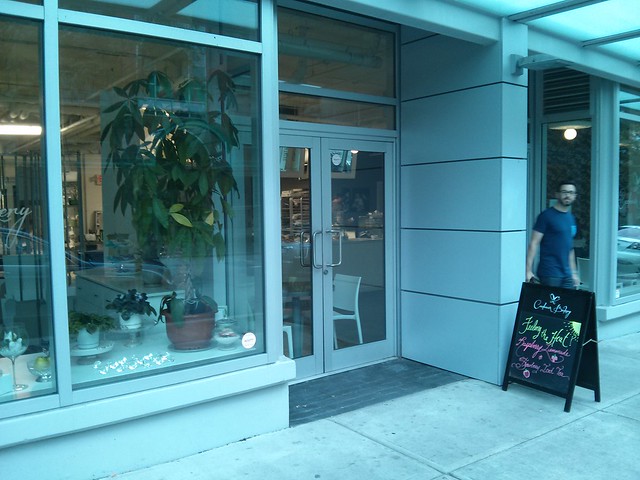 “There,” I say, and march toward it, confidently.

The place is delightfully incongruous – a cross between a fancy pastisserie and an industrial kitchen. Cross the threshold and you’ll see tables and chairs to your left and right, and straight ahead, a long counter and several display cases where a few dozen freshly baked treats sit. There is a sign that denotes the homemade ice cream offerings, and a list of available drinks (this time of year, they have everything from raspberry lemonade to cappuccino). 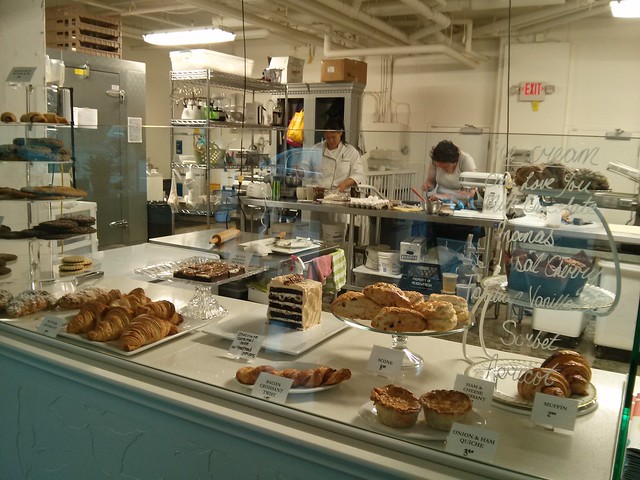 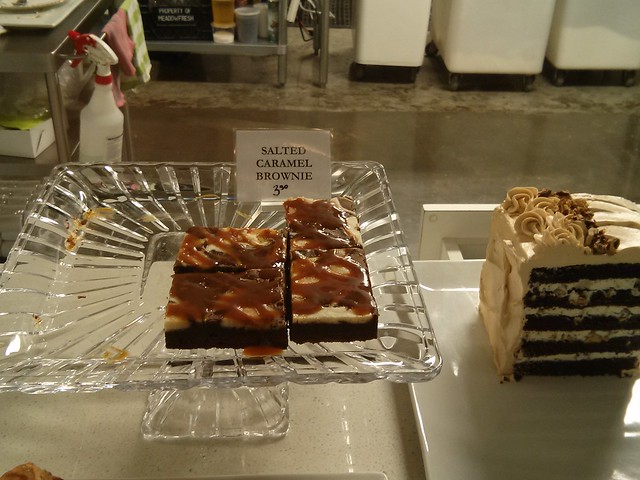 Several pastry chefs perform magic in the massive open kitchen that lies behind the display cases. Rand asks me what I want, and without a second of hesitation, I reply, “I’ll have a lemon meringue tart, a scoop of earl grey ice cream, and a cup of peppermint tea. And a molasses cookie for later.” 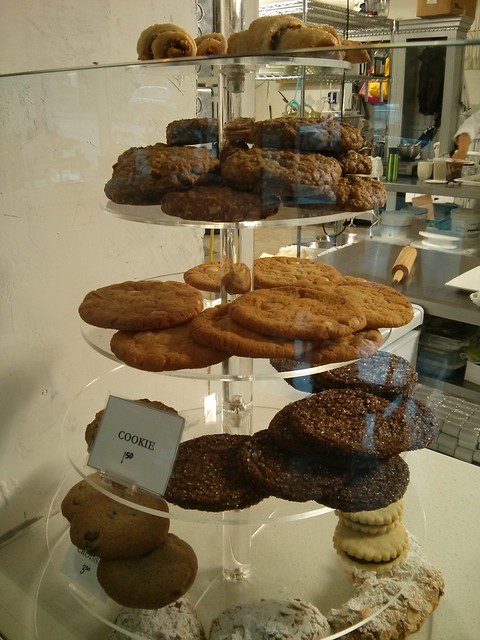 He looks at me with an expression I can’t quite discern. I’d like to think that it’s admiration, but it’s probably horror.

“Can I just share all of that with you?” he asks, tentatively.

I take his hand gently and smile.

After a brief discussion we conclude that if I eat all of those things by myself I will die. Fat and happy, sure, but also relatively soon. And so I decide on just the lemon tart and the tea, and Rand gets a salted caramel brownie and a cappuccino. 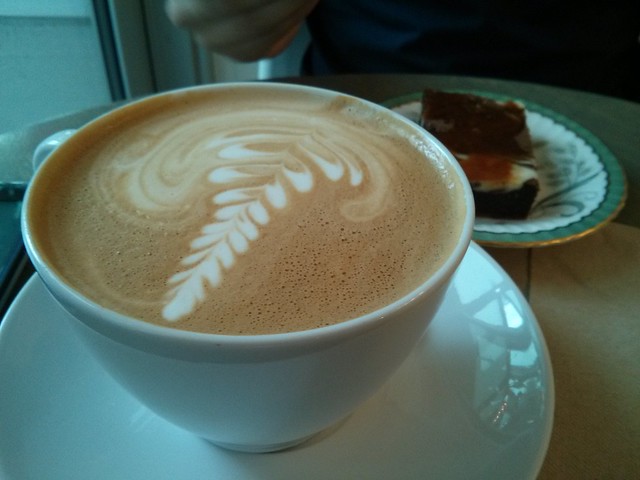 The decoration in the foam of his drink, when viewed from this angle, makes me giggle. 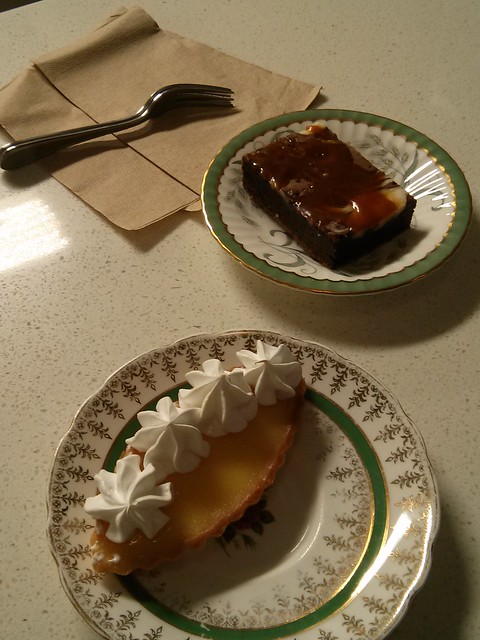 We sit down at a table by a window, and for a few seconds, I do nothing but regard the dessert in front of me. I always do this. The calm before the ravaging. Just looking at the tart is enough to temper my hanger, and I become even more convinced of my long-held belief that the right sweet can bring about peace in the universe.

Dear Humanity: Let’s have some cake and then some mother-f*cking world peace.

I finally take a bite.

I tell Rand that it is perfect, which is something I rarely say about citrusy sweets. They are often too sugary and not tart enough. But this one is. The lemon custard is enough to pucker my lips, while the fluffy meringue on top cuts through the acid to create balance. The crust is a solid piece of shortbread – it crumbles into large, buttery flakes under the pressure of my fork.

And the size is ideal – not too small, and not too big (this last point may sound ridiculous coming from me, but understand this: I will eat all of a dessert, regardless of quantity, if it is placed in front of me. Consequently, I am at the mercy of pastry chefs when it comes to portion control. This one doesn’t leave me feeling hollow, nor do I stuff my face until I feel ill. To take a page from the tale of a flaxen-haired home intruder, it is just right).

I sneak a piece of Rand’s brownie, which has the consistency of a truffle, velvety and rich. It is adorned with a cheesecake swirl and a dollop of caramel, and while entirely lovely, I prefer my choice. I suspect Rand might as well. 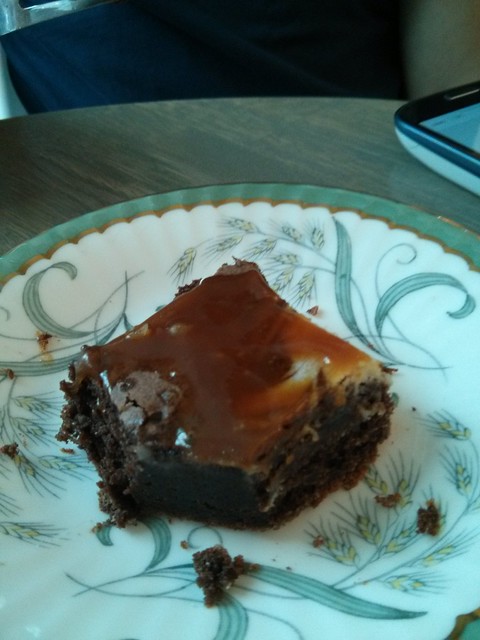 We cut in into an upside down superman insignia. A second later, I trace an “S” into the caramel.

We eat slowly, sipping our drinks. Rand peruses his email, while I stare at the chefs behind the counter. They chat with one another, occasionally laughing loudly at an inside joke. I am too far away to see what they are doing, but I recognize some of the motions; on one table, dough is rolled out, on another, something is delicately piped out of a bag. 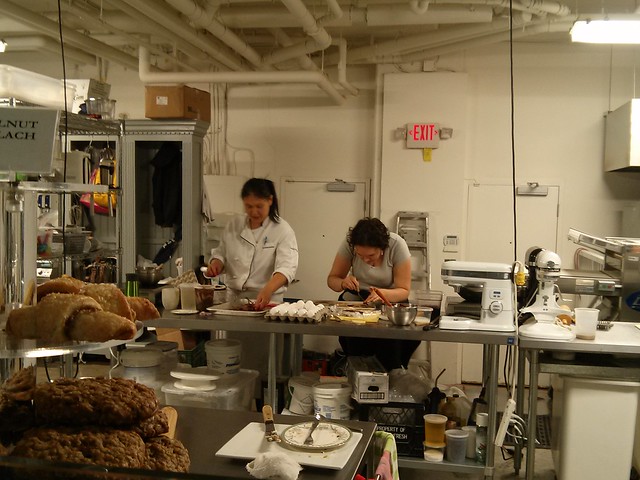 You know the expression, about how nobody wants to see a sausage being made? I think dessert is the opposite of that. Because everyone wants to see dessert being made. The process is meticulous, beautiful, alchemic.

We finish our drinks and desserts, we lick our forks clean. We consult a map, and figure out where it was Oli was trying to send us. And then we head back out into a world made slightly more harmonious by a perfect lemon tart.