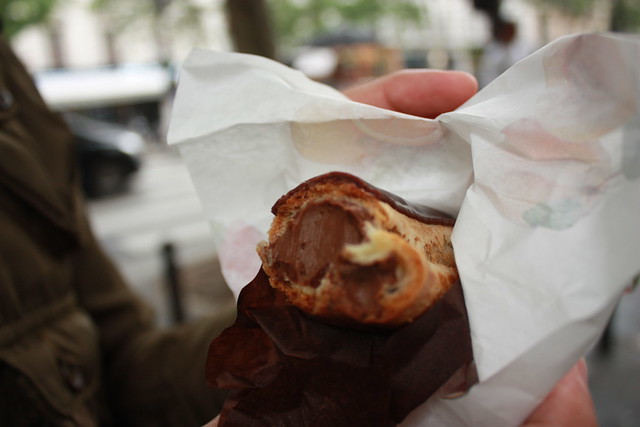 Today we are going to talk about eclairs. Because my blog tackles the tough issues.

But first, let me tell you about one of my earliest memories. It is, depending on how you look at it, equal parts tragic and wonderful.

When I was a wee little Everywhereist (back during a time when a more apt name for me would have been “the Whinerist” or “The Brattist” or possibly even “The Boogerist”), there were no sweets in my home.

I am convinced that this deprivation in my early years has led directly to my soul-consuming, insatiable sweet tooth as an adult.

The reasons behind this dearth of  danishes, this bankruptcy of bubble gum, this scarceness of Skittles was simple: virtually no one in my family like sweets. The root cause has something to do with either masochism or madness, and I haven’t really sussed it out. The point is that I took sugar wherever I could get it.

Yup. I ate toothpaste. Because that was the closest thing to something sweet that I could find in the house. Mind you, this was the early 1980s, long before the spate of super sweet kids’ dentifrice flooded the market. Toothpaste didn’t resemble a Willy Wonka-esque wetdream. It tasted like … well, it tasted like toothpaste.

Which leads us to what is one of my earlier memories.

In the downstairs of one of the houses in which I lived when I was very, very wee, was a small bathroom. It was affixed with a short sink that was perfect for a child. It was just the right height when I was four or five, but in this memory, the sink was still difficult for me to reach, so I suspect I must have been barely 2 years old or so.

One day, I was left unattended for a few precious moments. Don’t let this scandalize you too much – clearly, I lived to tell the tale (plus, it was the eighties, people. It’s a miracle I wasn’t doing coke and going to prison for insider trading). During my brief freedom, I made a bee line for the one sweet thing I knew of, the one bit of saccariney goodness that was within my reach.

I went for the toothpaste.

It tasted like victory. Delicious, delicious achievement. I wandered around for a few precious seconds, savoring every glob. And then I rounded a corner (or perhaps I climbed a few stairs? Yes, I think there were stairs), and I toddled straight into my mother.

I was too young to be reprimanded with words – I remember only that my hard-earned tube of … Colgate? (God, was it Colgate? That is just sad.) was gently taken away from me, and I can actually see my two little hands reaching up for it, from a perspective that was not too far up from the ground.

I was too little to articulate what was wrong. I don’t even think I had a temper tantrum. I just watched as the tube vanished, and accepted my fate.

There would be no sweets. For years.

There were a few exceptions of course. Birthdays brought cake. Doctor’s visits brought popsicles or lollipops. And later, towards middle school, there were doughnuts. I don’t think my mother bought them, and I don’t know how they ended up at the house. But every now and then, on Sunday mornings, there would be a thin paper box of them from the grocery store, with a clear plastic window in the top.

They were not the best doughnuts. Indeed, they were probably pretty low on the doughnut spectrum, hovering just beneath those chocolate frosted Hostess Donettes that leave a waxy coating on the roof of your mouth (and well below the vaguely-named “crumb” flavor, which I’m pretty sure have beef tallow in them and despite that realization, I could still eat a roll of them right now).

Among these, there was always something which was dubbed (in hindsight, rather incorrectly) as an eclair. It was a long, rectangular doughnut (a shape which is often the exclusive realm of maple bars), filled with custard (or, more likely, instant pudding, because this was Publix we are talking about) and slathered with a layer of chocolate frosting.

I remember the first time I ate one. I had no idea that it was cream-filled – such a thought wouldn’t have even entered my sugar-deprived head. I just reached for the largest frosted doughnut I could.

Imagine my reaction when I took a bite and the creamy inside oozed out, when I discovered there was dessert INSIDE of dessert. I wanted to dance. I wanted to sing. I wanted to cry.

As I grew older, I realized that the potential for what a dessert could be was far greater than what I had experienced as a child. Cookies could be made from scratch, which resulted not only in a fresh-baked batch, but also yielded a mixing bowl with traces of dough, and a house that smelled like vanilla. Homemade cakes could be whipped up with only slightly more effort than was required of a box mix. And exclairs? Eclairs could be magical.

A true eclair does not begin with a gummy fried doughnut. Instead, it involves a choux pastry – light and eggy – which is baked in the oven, and then filled with cream and topped with a smearing of ganache.

It’s no surprise that in France, the birthplace of the eclair, the pastry is regarded almost like fine art. Some of the iterations we saw were absurdly beautiful. 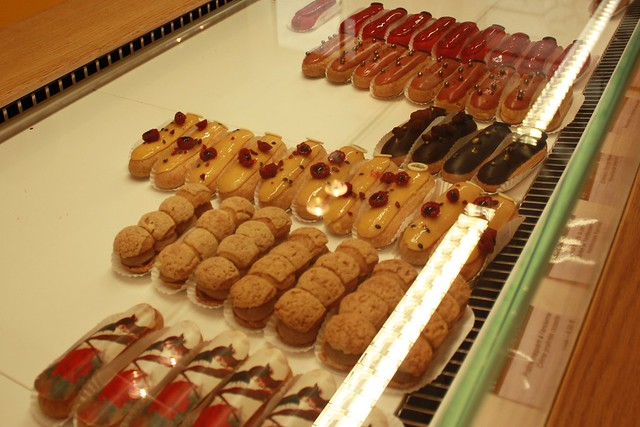 I don’t know how someone eats something this lovely. I, personally, could not. 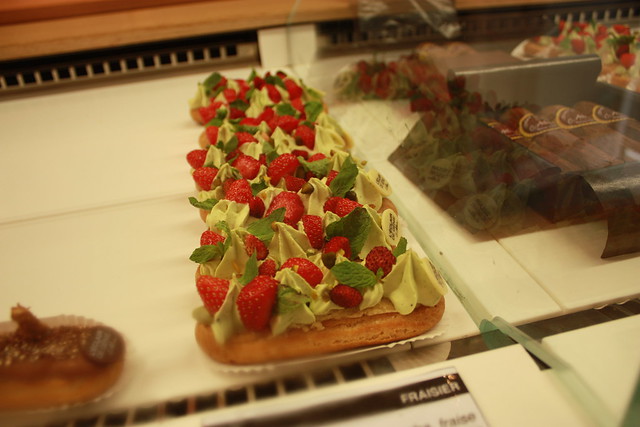 It was glorious, and entirely too much. For a girl who grew up on grocery store doughnuts, I needed a more humble eclair. One that was still delicious but remained truer to the source material.  I found precisely that at Boulangerie 28 (note: supposedly it is named Boulangerie Gérard, but the sign does not suggest that. Searches for the name I’ve listed will get you to the right place).

Located around the corner from the Bastille, this inconspicuous bakery is miles away – literally and figuratively – from Ladurée on the Champs-Élysées. There are no tourists or fancy boxes, though there may be a line. The florescent lights which buzz overhead cast a grey sheen over the entire shop. Clearly, this is a place that values substance over style.

I ordered in French; it seemed out of place in such a small, local shop to do otherwise. We seemed to be the only Americans in the place (indeed, the only foreigners there), and this shocked me; the Paris we’d seen was overrun with visitors.

I left with a chocolate eclair, which I bit into the minute we were outside of the shop. In retrospect, I have to admire my restraint for waiting that long.

I tried to mimic the amazement I felt when I first tried an eclair, all those years ago. 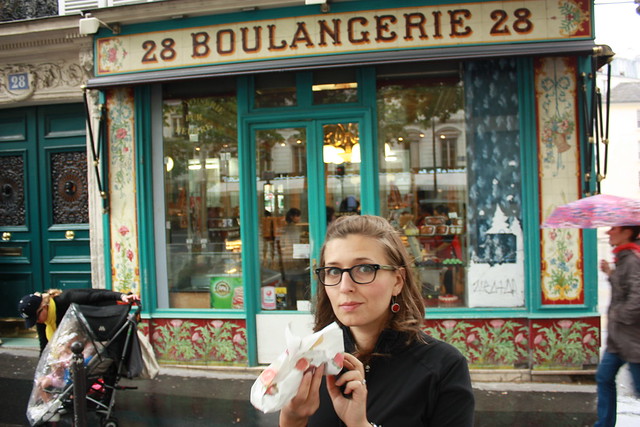 In a rare act of benevolence, I even shared it with my beloved. 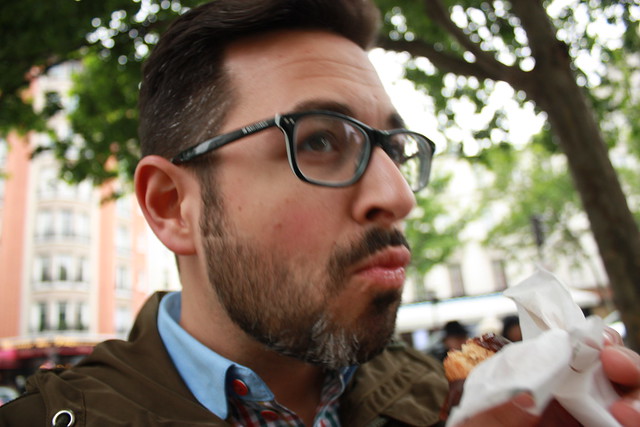 This photo is blurry because it is what you would call “an action shot.” I even used the sports setting to take it, because WE ARE ATHLETES.

But the rest was mine. The filling was cool and creamy and – rather unexpectedly – chocolate. I’m not even partial to chocolate, but this was something else. This was like no eclair I’d ever known. A smattering of textures, it was both dense and airy. I couldn’t really fathom it. 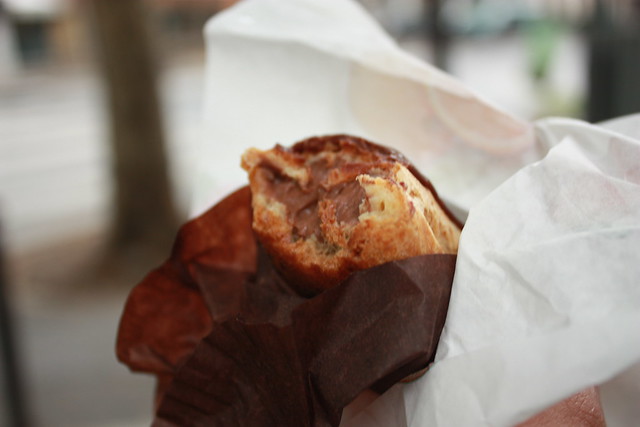