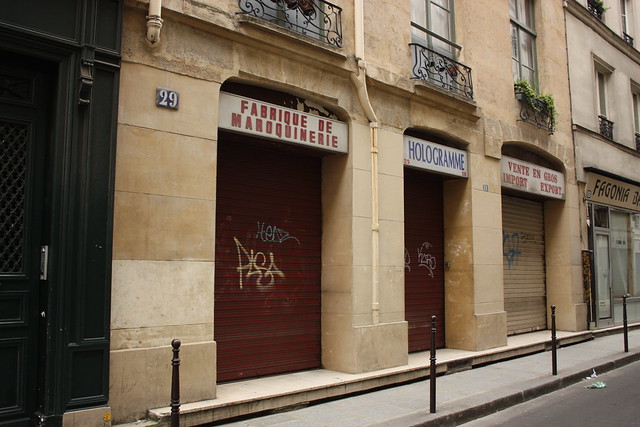 Paris, like most European cities, is a barren wasteland on a Sunday. The shops are all closed, the pastisseries boarded up, the streets empty. You can walk for hours and not find anything open – not even a grocery store at which you could possibly buy a roll of crackers to soothe your growling stomach.

You will occasionally see a person walking about – they don’t look starved or emaciated, so clearly they must have anticipated this, and stocked up on food beforehand – but they are few and far between. They appear in doorways for a few brief seconds before they hurry back inside,  as though they have broken some unwritten curfew.

You finally manage to find someone – a seemingly lost soul, wandering the streets – and ask them where everyone is. They look as you as though you have inquired why people are crying at a funeral.

“It’s the weekend,” they say. Obviously.

This response explains absolutely nothing, though. In America it’s illegal to call it the weekend if you aren’t devouring all-you-can-eat pancakes until your pants don’t fit. After which you waddle over to the mall (which is totally open) and buy new pants.

But in Europe, Sundays are apparently a day of rest (not sure who made that up, but it sounds unwholesome, if you ask me). There are even laws in some EU countries that limit how many hours stores can be open during a week. This is to protect smaller shops that can’t afford to stay open as long as their big-chain competitors.

I can’t wrap my head around any of that. In the U.S., we are taught that if there isn’t a 24-hour taco stand that also sells Nike shoes within a 10-minute drive of your home, the terrorists have won.

The first time I encountered the sleepiness that is Europe on a Sunday, I found myself twitching and frustrated outside a shop in Rome (or was it Madrid, or London? No matter. In this respect, they are all one city. A dark storefront means the same thing in any language). It wasn’t going to open until the following day, long after our flight had left. I  pressed my nose against the window, gazing at a pair of shoes that should have been mine, a few crumpled bills of foreign currency in my hand.

Rand eventually tore me away with the promise of getting me a cake, but where the hell are were we going to find that when the entire town was shuttered up? No shoes, no cake. It was basically like Cormac McCarthy’s The Road.

This time, during our Paris visit, we were ready for it. We’d been to Europe enough times to know what to expect, and had been particularly warned about Paris.

“It’s absolutely deserted on a Sunday morning,” our well-traveled friend Rachel had explained. “But there’s a few things open in Marais – the Jewish quarter.” 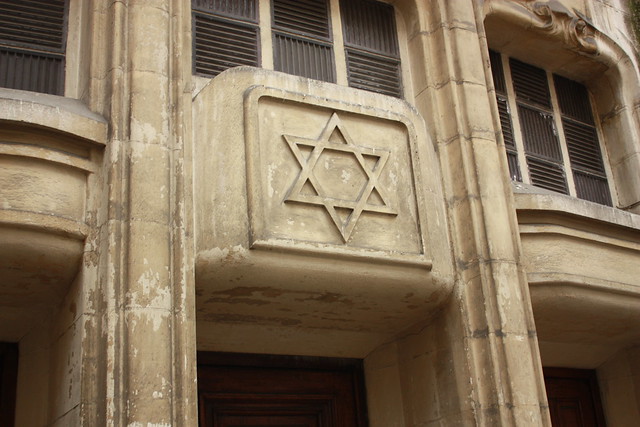 So that’s where we headed on a hazy Sunday morning when the rest of Paris was sleeping off the exhaustion of being Paris.

And it was awake. Even in the rain and dreary weather, there were people everywhere. Some were tourists, some were locals, all so impervious to the droplets that fell from the sky that we might as well have been at home.

We’d wandered through Marais a few other times during our trip, once to visit Chez H’anna, where we’d had a fantastic lunch. But there was a special energy in the neighborhood on Sunday morning, a sort of wonderful electricity that buzzed on every corner.

Today, it seemed to hum, Paris is ours.

And in Paris that morning, we did what Americans do on Sundays. We went to brunch, and ate all manner of carbs (I will tell you about it in detail in another post). And when we were through, we waddled out on to the street … and we shopped.

Not everything was open, mind you. But many places were. And there were people in the streets. 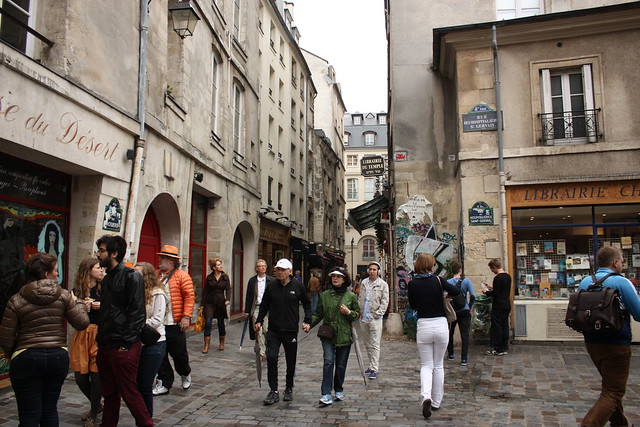 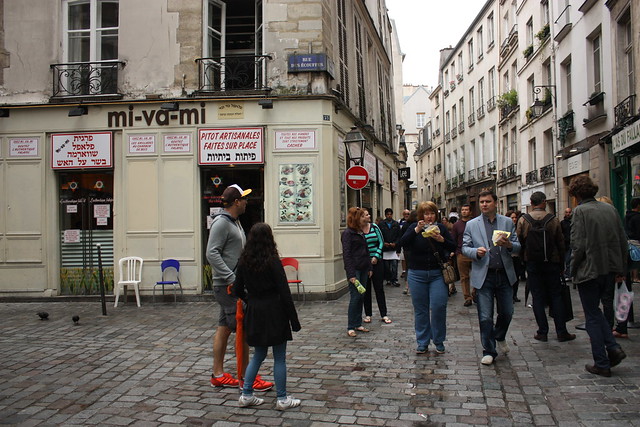 They crowded outside the boulangeries, they waited in the rain for falafel. They met in doorways and chatted and wandered from shop to shop with bags full of purchases. 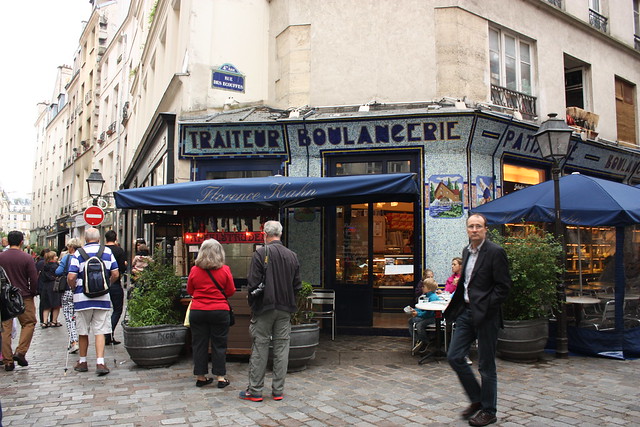 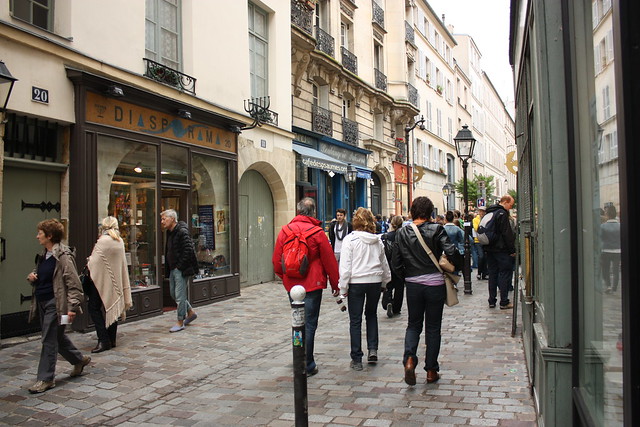 For hours we walked, until we were hungry again, and got lunch not far from the Centre Pompidou (which we almost went to – it was open on a Sunday!- but didn’t, because we passed a Chagall exhibit that called to us more loudly). 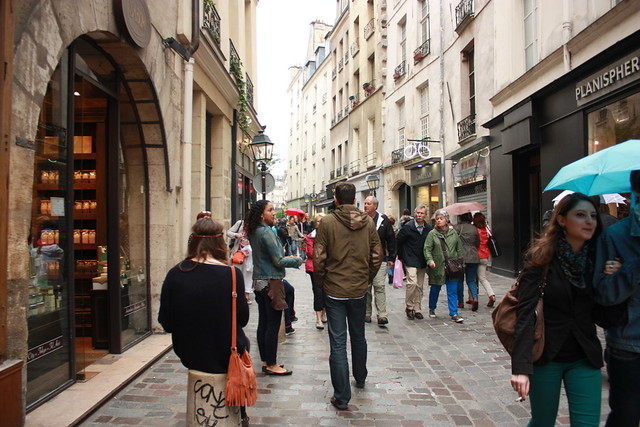 The restaurant we found ourselves in – Les Fous d’en Face – was dark and deserted, but the service was wonderful and the portions embarrassingly large. 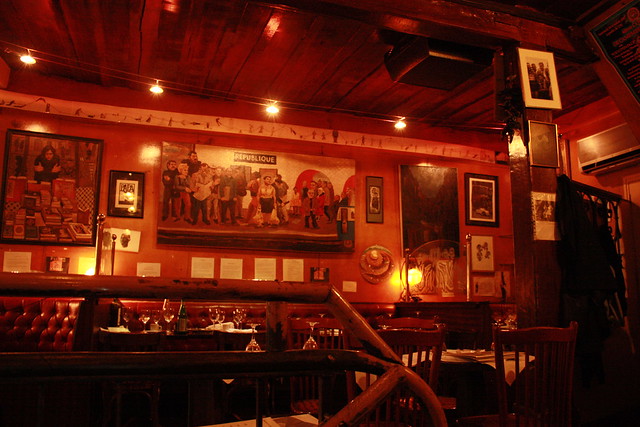 We tucked ourselves into a cozy, cylindrical booth that made me feel like we were sitting in a barrel. Rand got a bathtub of pot-au-feu, and I got steak frites. 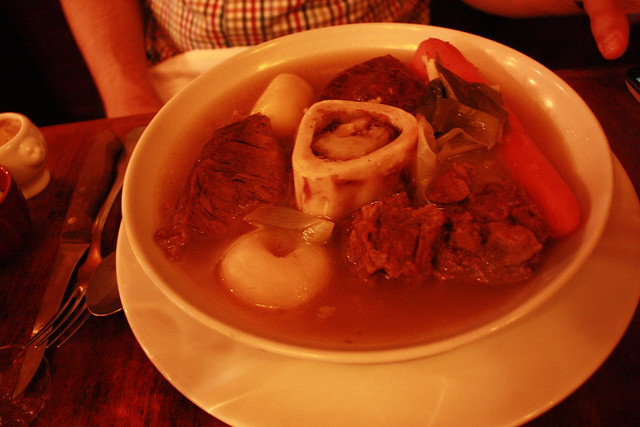 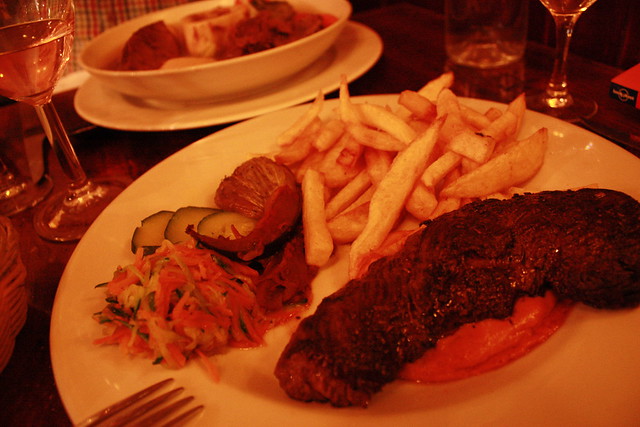 He had a glass of wine. 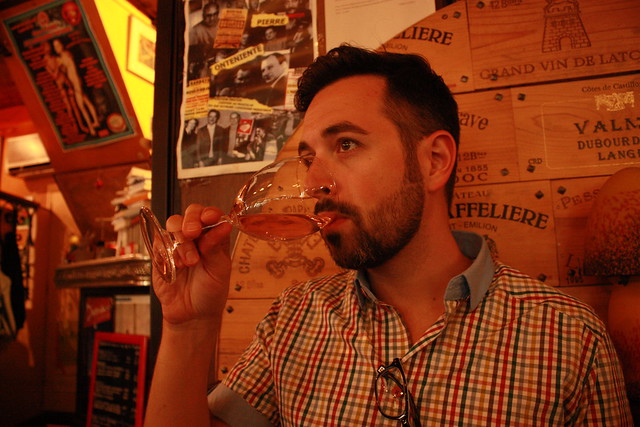 “Try to look more French,” I demanded, and he did: 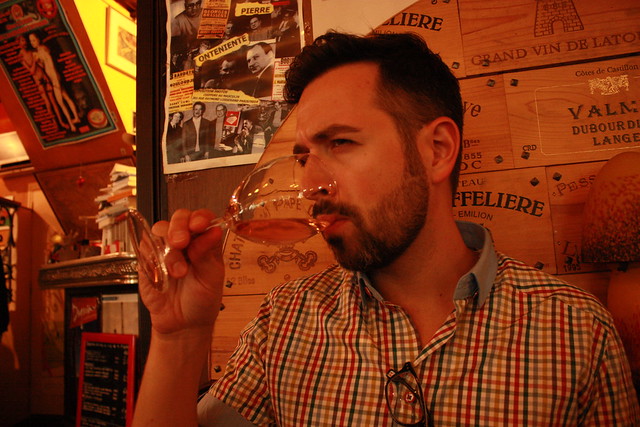 Afterwards, we walked through the Jardin du Luxembourg, which was lovely despite the rain. Plus, you can’t close a park on a Sunday – even the French know that. 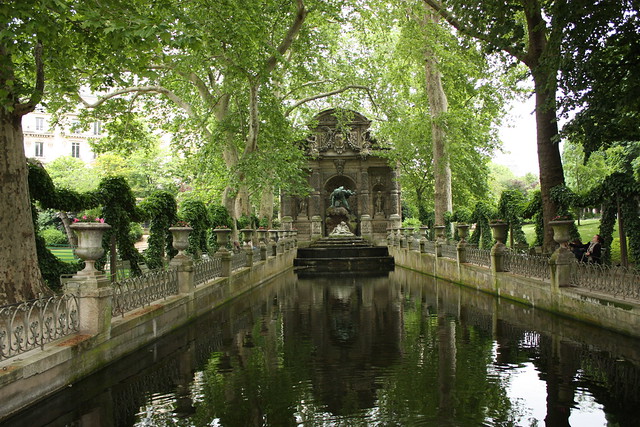 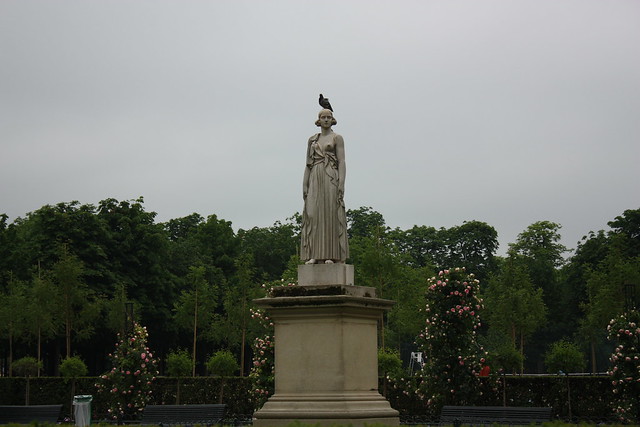 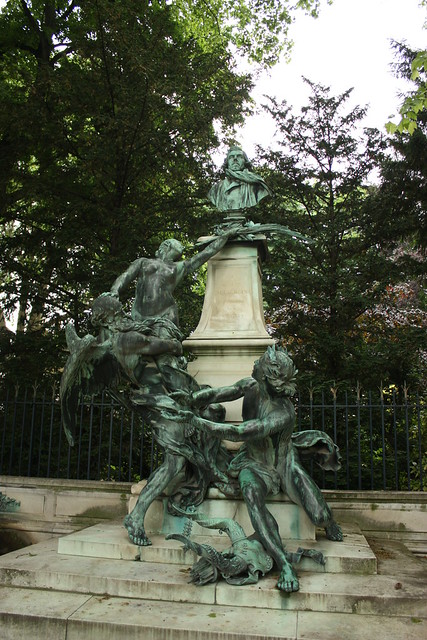 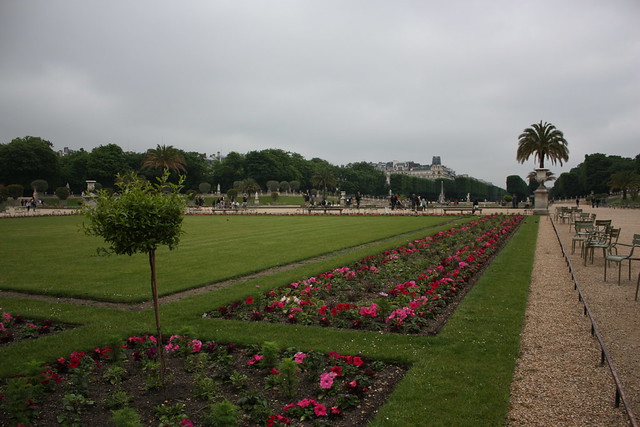 We stopped at the museum located therein (aptly named the Musée du Luxembourg, which is open every day, and until 7:30pm on Sundays), where we saw the aforementioned Chagall exhibit. 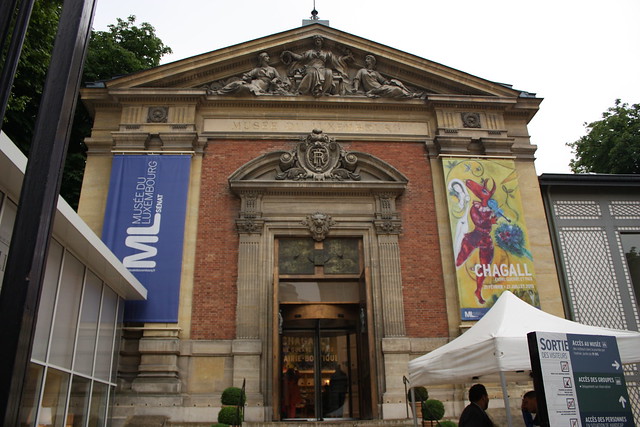 And after all of that – of hours on our feet – we went back to our hotel. 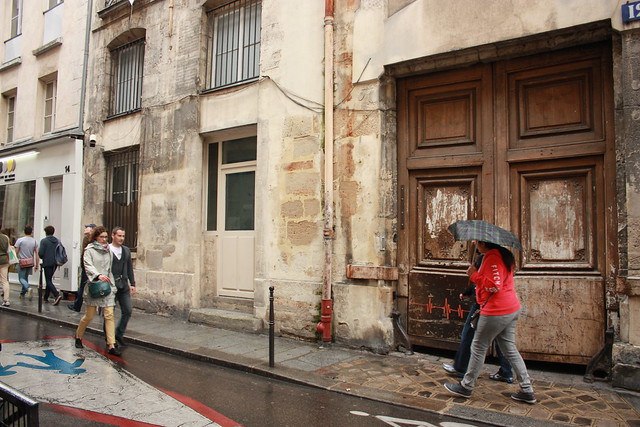 Exhausted from our not-at-all-lazy Sunday, we slept until the noises of Monday seeped into our hotel room from the street below. I got up, groggily walked to the curtains, and pulled them back – revealing a Paris that was vibrant and bustling and wide awake.

And then I closed the curtains once more and climbed back into bed.

What to Do in Paris on a Sunday: