Many months ago, I wrote a post about the wonders of Bavarian food. I didn’t spend a lot of time fixating on dessert, which shows you just how darn good the sausages and breaded meat and dumplings of Southern Germany are (parenthetically, all of those dishes sound like euphemisms). A few folks told me that next time I found myself in that part of the world, I needed to try a dessert called kaiserschmarrn. 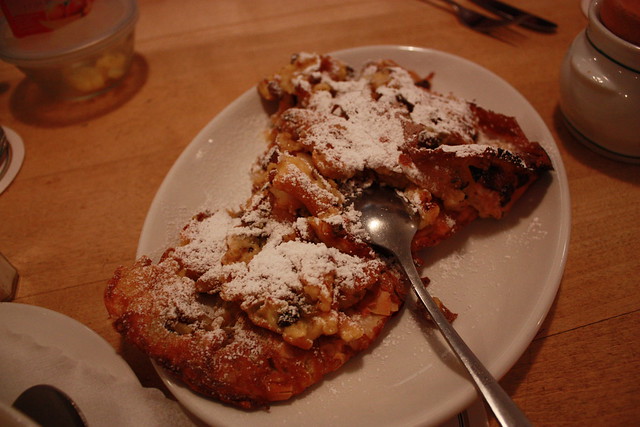 This intrigued me for several reasons:

I tried kaiserschmarrn for the first time a little restaurant in Munich that is quickly becoming one of my favorites in the city. The Bratwursthertzl is just around the corner from Ludwig’s (a restaurant which has kind of fallen in my esteem over the last few years), in the Viktualienmarkt. The interior is warm and dark and filled with locals, but the staff remains excessively kind to tourists, especially when your husband tries to order a beer in German. 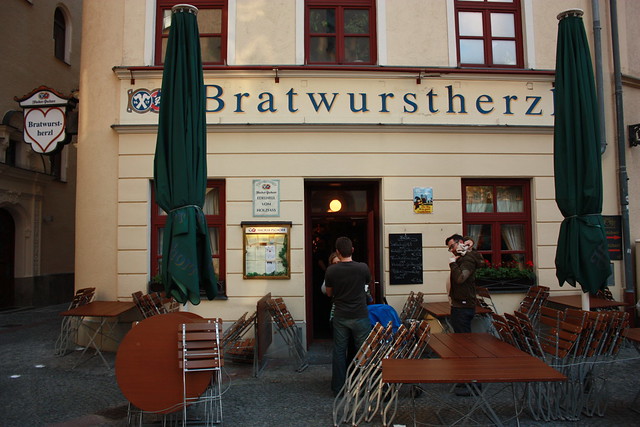 The facade is rather uninspiring, but the food and service are delightful.

The sausages are lovely and ridiculously affordable, and the wiener schnitzel is good too, but since it’s not their specialty, it’s a bit overpriced. We dragged my brother and sister-in-law there on a grey afternoon, and after we’d gorged ourselves on sausages and potatoes and a couple of beers, Rand suggested that we order some dessert.

I tried to object, which is something I do occasionally and half-heartedly, so that I don’t become too predictable. You only think you know me, Rand! I’m quirky and strange and adorable! I’m basically every character Zoe Deschanel has ever played, ever, except not quite as hot and slightly more neurotic!

Rand noticed that they had kaiserschmarrn, and insisted that we had to try it “for the sake of the blog.” And who am I to fight with him when journalistic integrity is at stake?

It arrived at the table in a steaming, messy heap. This is, to my understanding, how it is supposed to look. The giant, eggy pancake is broken up during the cooking process (and occasionally tossed with fruit, though ours was not). Everything I’ve read online suggests that the dish is actually Austrian, but Bavarians seem to have claimed it as their own.

Ours smelled like cakey and sweet, and faintly of burnt almonds (which were strewn atop the confection). There was a quick dusting of sugar on top which helped hide the hot mess below – the culinary equivalent of throwing a decorative tapestry over a worn couch.

I took a few bites. It reminded me of a Dutch-baby style pancake that I’ve made in the past. The texture was spongey and slightly rubbery, but not unpleasant. It was delicate and warm and made me feel ridiculously cozy until I encountered a raisin.

That’s right: kaiserschmarrn has raisins in it. They are often soaked in rum, which helps only marginally, because it kills much of the raisin-y taste. But they are still in there, and eating around them is a difficult task.

It also came, inexplicably, with a side of applesauce. I tried the two together, to see if it produced something more magical than the sum of its parts (like Nutella or that time Davy Jones guest-starred on The Brady Bunch), but I wasn’t impressed, and we safely went about ignoring the side of the pureed fruit until kaiserschmarrn was gone. 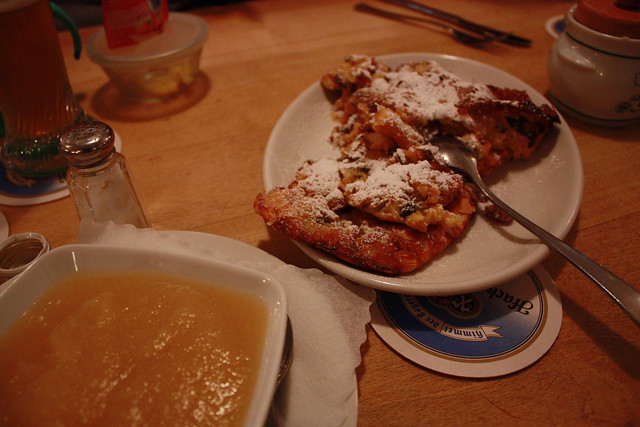 “What did you think?” Rand asked me after we’d made short work of the dessert.

I shrugged, though even as I did so, I was looking to see if there was any left- if somehow, in the frenzy, I’d managed to knock a few pieces to the corners of the table. I am not above eating table-dessert.

Sadly, though, I had not.

“It’s just okay,” I said, licking my spoon. I liked the idea of it for breakfast, but wasn’t sure how I felt about it as dessert. “We should probably order another one so I can definitively say what I think of it.”

I wondered if this time, we could get it without raisins.