On any given day, despite my desperate pleas to be left alone, I receive at least a dozen press releases from people asking me to try out a new product and review it on the blog. Most of the items they are schlepping seem to be odor-killing chemicals that you put in your toilet bowl before taking a crap, because apparently as a society, this is one of our biggest concerns: we literally want other people to think our shit doesn’t stink.

I think global warming might be a problem, too, but whatever.

Without fail, I ignore these requests, and I’m going to tell you that it’s for some noble reason, like keeping the integrity of my blog intact (such that it is). But I’d be lying if I didn’t say that laziness had something to do with it, too.

I usually delete without hesitation, but sometimes curiosity gets the best of me, and I click on a link. It usually leads to nothing terribly interesting, until this past week.

That was when I discovered a company selling some of the worst products, ever. I’ve decided not to identify them by name, because I don’t want to reward stupidity with publicity. Instead, I will simply say that they are based in the UK, and that I am fairly certain that their product development team is headed up by hyper-intelligent crustaceans who almost understand the human race.

They specialize in wall decals, which is already problematic. Are you familiar with wall decals? They’re like giant stickers that you can stick wherever you want.

Okay, to be fair, that sounds awesome. But as someone who spent her childhood being driven mad by the bubbles in the contact paper liner of her drawers, I can only imagine the havoc that wall decals would wreak on my psyche. I’d probably be obsessed with the idea that my ginormous wall decal of Tom Cruise was slightly askew, and then I’d try to peel it off and reposition it, but it would still be crooked, and I would be driven mad by his FURROWED-BROW GAZE.

(Please note that while composing this post, it was at this point that I took a twenty minute interlude to look up photos of a shirtless, 20-something Val Kilmer, because I am committed to my craft.)

And in case you think that earlier example was hypothetical: 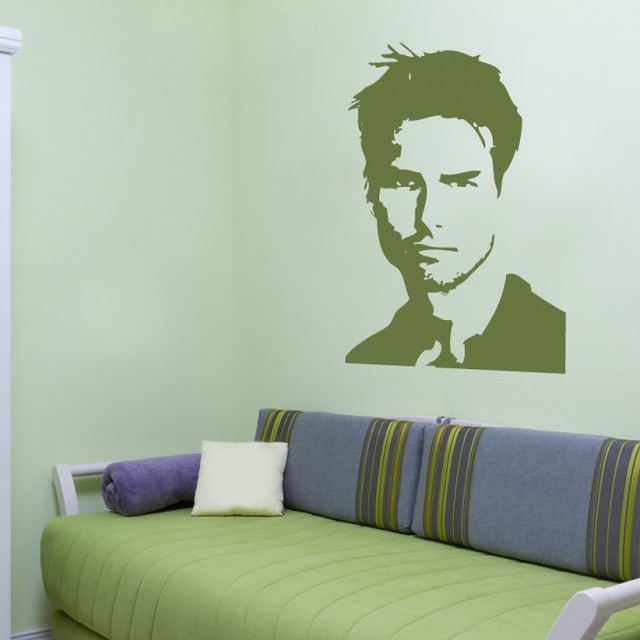 GIANT WALL DECALS OF TOM CRUISE ARE A THING.

I mean, how the hell would you explain this to your in-laws when they came over to visit? Or imagine if you and your husband had a huge fight in the living room. Dear god, the two of you would be screaming at each other and all the while he’d just be staring … staring.

I bet Cruise would enjoy it, too. He seems like a wee, spiteful man.

I cannot, honestly, imagine how this came about. Did someone request it? Were they flooded with emails from people demanding a decal of Tom Cruise’s head? Or did they just decide this in a meeting?

Businessperson #1: We should sell celebrity wall decals. Giant ones. But just of their disembodied heads.

BP #1: We could go for timeless celebrities, like Marilyn Monroe or James Dean or –

BP #2: Is there anyone else we should include? 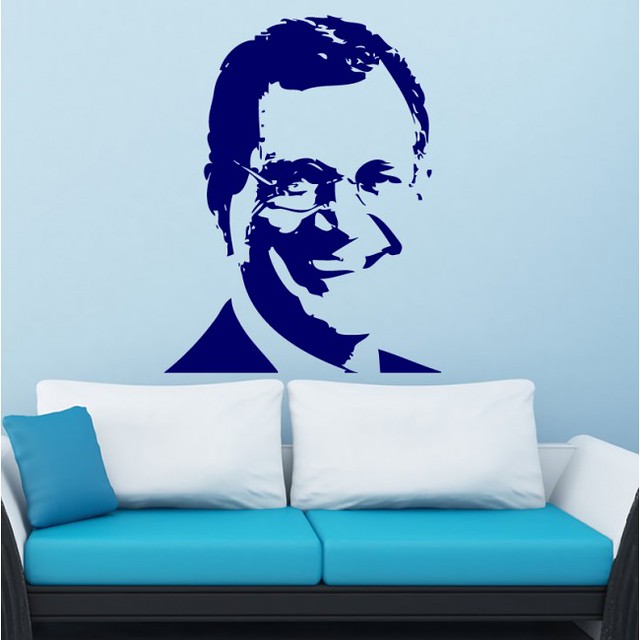 David Letterman, apparently. And also the 32nd President of the United States of America: 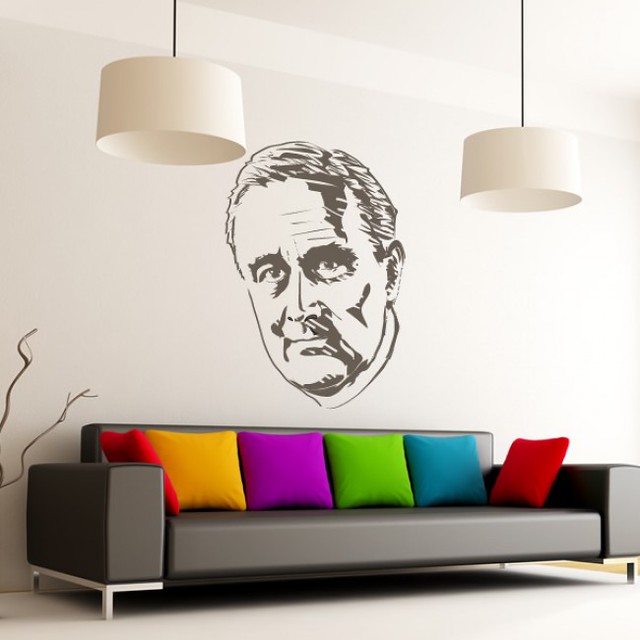 This would make a great present for your friend who’s really into dimes.

What amazes me the most is that in the sample photo, they’ve put it in someone’s living room (and not like, a high school). Because I can’t tell you how many times I’ve walked into my home and thought, “You know what this place needs? FDR’s head.”

But don’t worry – they haven’t forgotten about the children. And what does every child want on the wall of their bedroom? 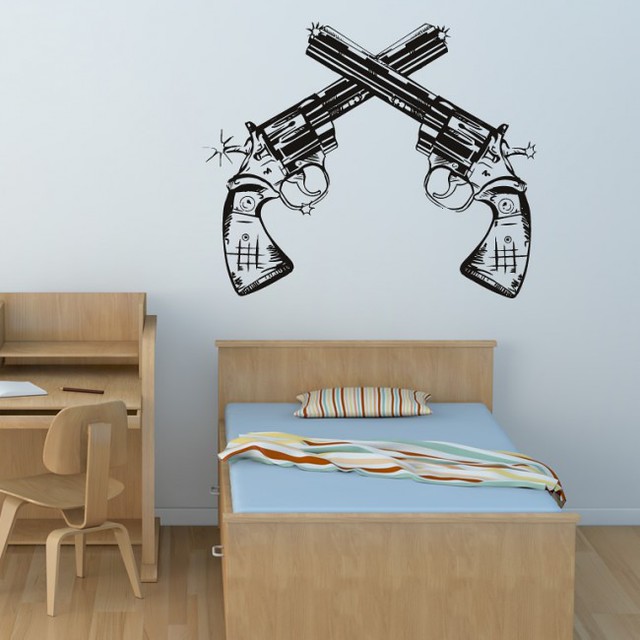 Of course, a decal of just a pair of guns is kind of ridiculous, so … 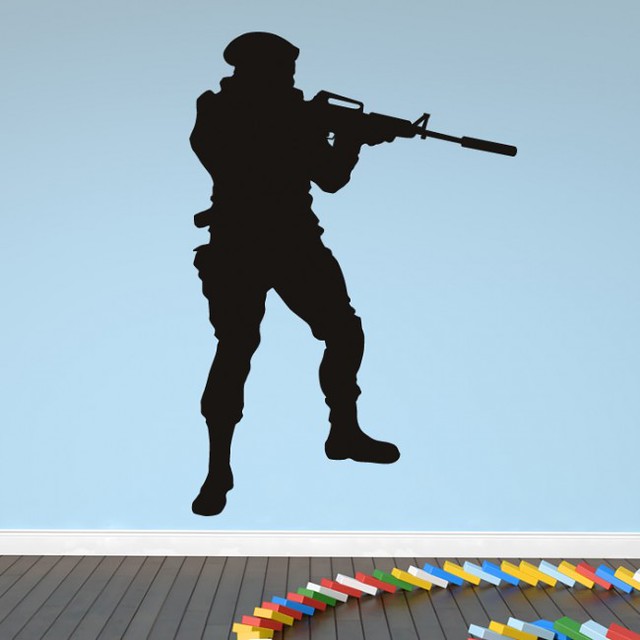 Note the toys on the ground.

I’m glad they also included the silhouette of an officer wielding a weapon in combat.

And just in case you deem all of that inappropriate for children: 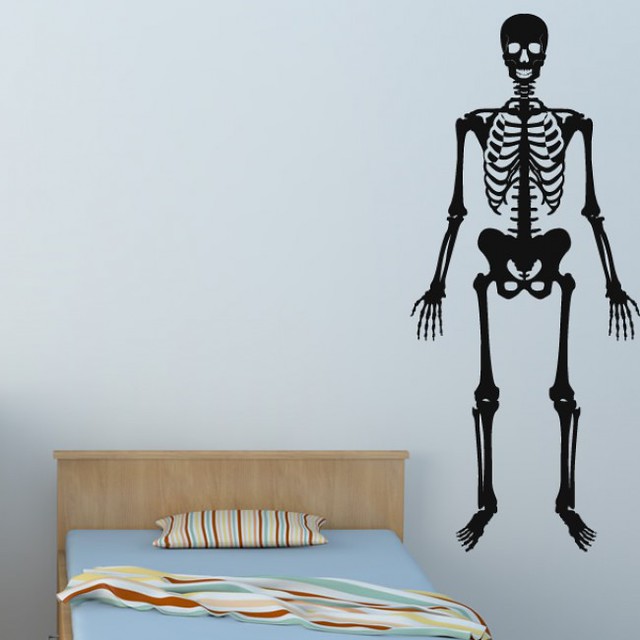 “Sleep well, my angels, and don’t let the giant, maniacally grinning skeleton devour you whole during the night.”

After seeing all of this, I tried to figure out precisely why this company reached out to me. I found that they had number of geographically-themed decals, which could be tenuously related to travel, I guess. The company, as I mentioned before, is based in the UK. This quickly becomes apparent when you compare their rendition of London’s skyline … 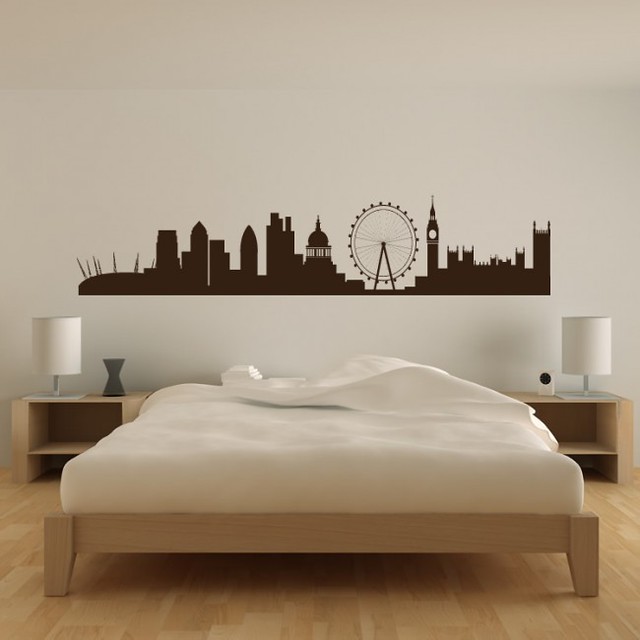 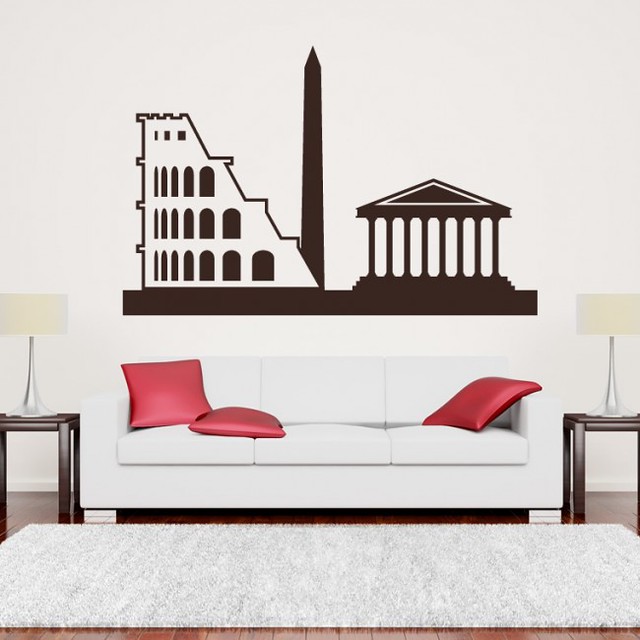 But hey, skylines are tough, right? It hardly seems fair to pick on them for that. A city’s appearance varies greatly depending on your viewing angle and how drunk you are.

Countries, fortunately, are always depicted in pretty much the same way, so if you want an enormous, geographically-accurate map of Germany on your wall, you can have that. 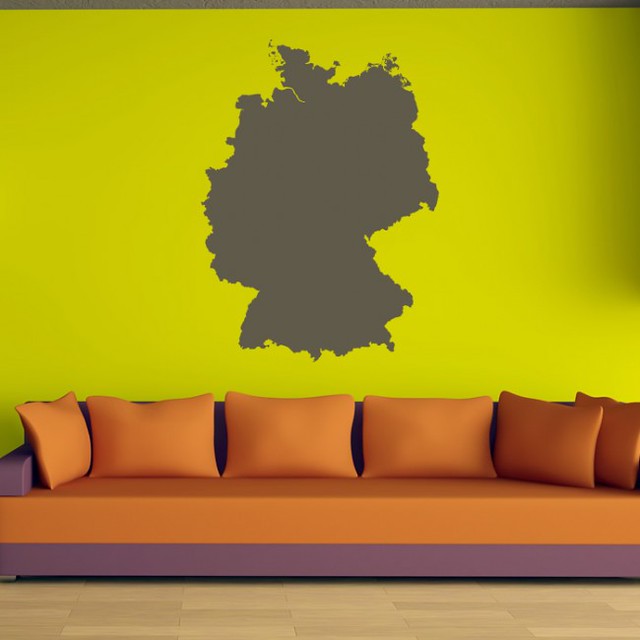 Not to be confused with mold.

You are shit out of luck, though, if you want Japan. 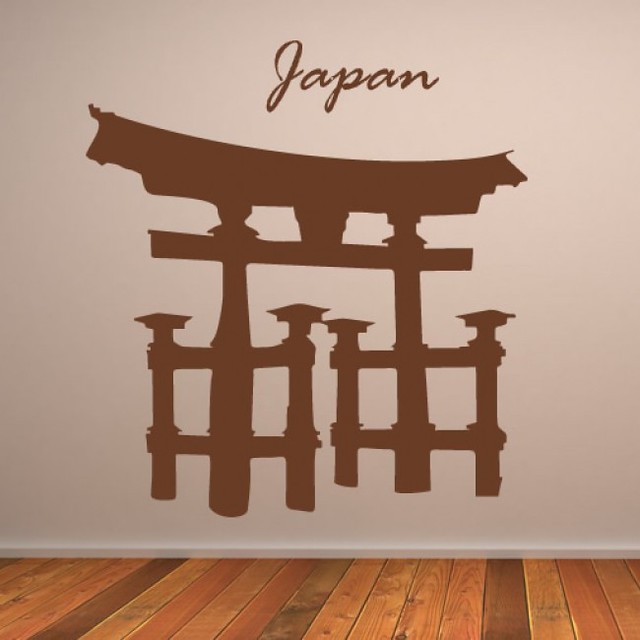 In the designer’s defense, no one really knows what Japan actually looks like, right?

OH WAIT YES THEY DO.

I was ready to dismiss it all, because while it was odd, it wasn’t actually WTF material. That was until I saw this, which … oh, dear. 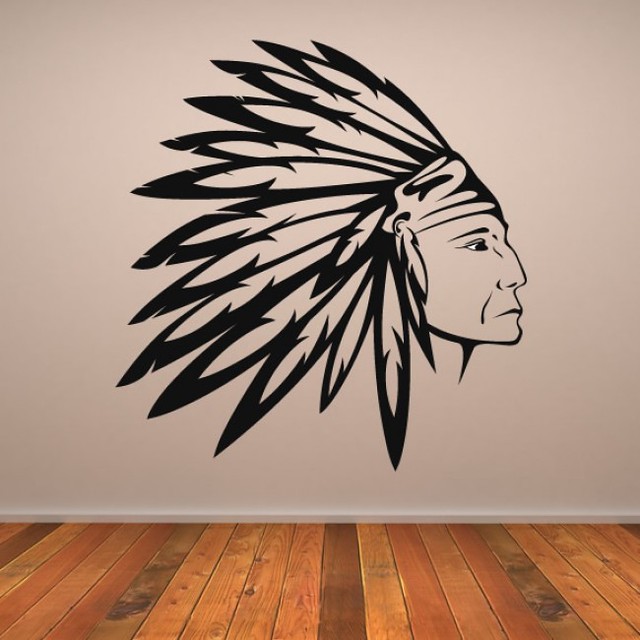 I mean, it seems like maybe we shouldn’t have generic, inaccurate depictions of an ethnic group, you know? We’re all in it together on this planet, and OH SWEET JESUS WHAT IS THAT? 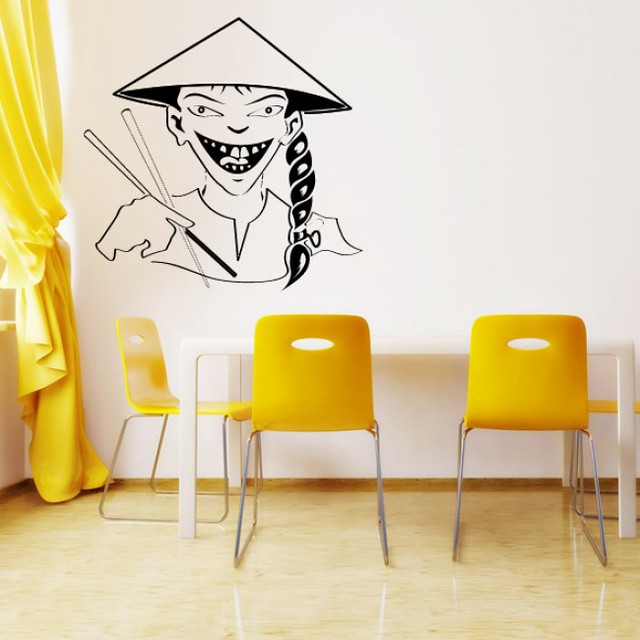 No. No. No. Jesus. This makes the giant Tom Cruise head seem reasonable by comparison. Seriously, people. WTF. STOP EMAILING ME WITH THIS STUFF OR I WILL LOSE WHATEVER DWINDLING FAITH I HAVE LEFT IN HUMANITY.

I’m gonna go watch clips of the volleyball scene from Top Gun whilst trying to forget that any of this ever happened.