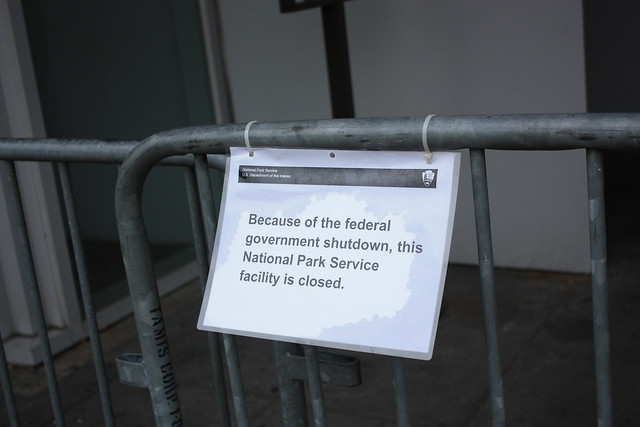 Visiting Philadelphia during a government shutdown was a strange thing. The National Parks at the heart of the city – Independence Hall and the Benjamin Franklin Museum – were closed, and the surroundings areas looked all but abandoned. Fences were placed around many of the buildings, so you couldn’t even press your nose against the window to see what you were missing. Guards monitored the entrances to make sure no one made a mad dash for the front doors of the Liberty Bell. 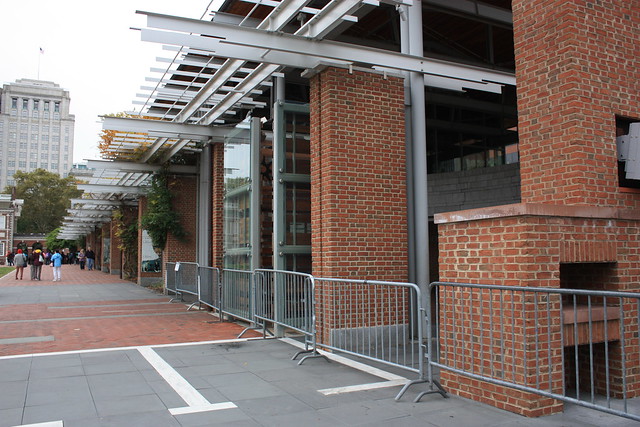 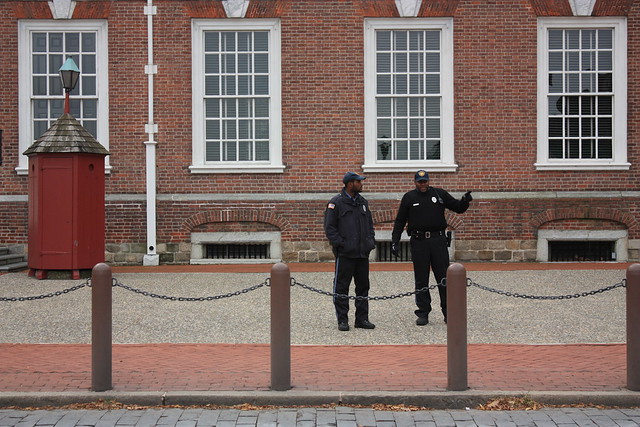 I anticipated that the attractions and museums not operated by the National Parks System would be swamped as a result – but that wasn’t the case. Even the few places that were open were empty – the government shutdown had hit Philadelphia hard. 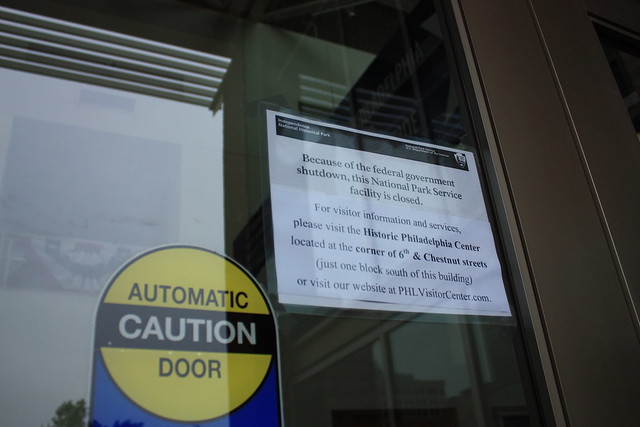 I saw what I could.

I headed to Benjamin Franklin’s grave first. Since it’s not part of the National Park System, it remained open (and even if it hadn’t been, it would have been easy to see it through the fence of the cemetery), before wandering over to Independence Hall Visitors Center, which was, as I’d expected, closed. 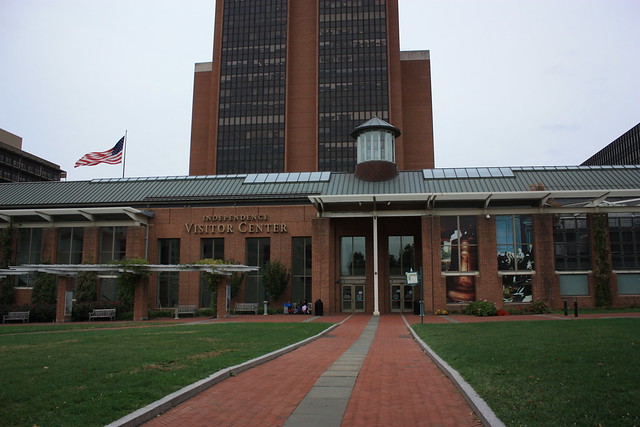 I noticed a few foreign tourists milling about, trying to open the doors with confused looks on their faces. I considered trying to explain to them what was going on, but I wasn’t sure what I’d say.

“Our government is shut down, so everything is closed,” I’d begin, before realizing I barely understood the situation myself. “Because … because …”

And then it would hit me.

What? That sounds reasonable enough.

Of all the shuttered buildings, the Liberty Bell Center was perhaps the most poignant, the most depressing. Letters etched on an interior wall read, “The World’s Symbol for Liberty.” 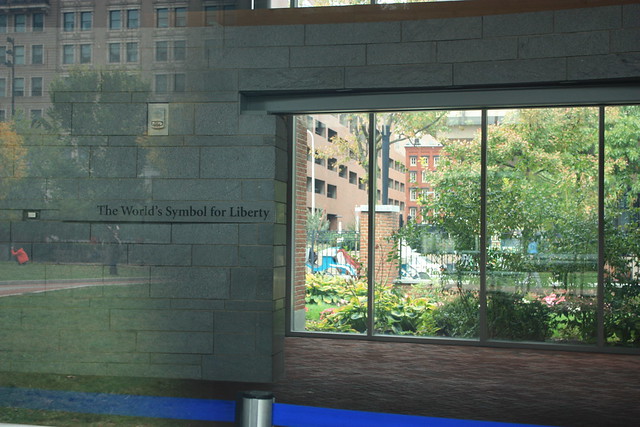 And IT WAS CLOSED. I hope the irony’s not lost on you, Simpson.

I was pretty bummed about this – I’d wanted to see the Liberty Bell for quite some time. Fortunately, I found a little alcove with a window to the bell. The view wasn’t bad – though the famous crack was not visible from this angle (hee). 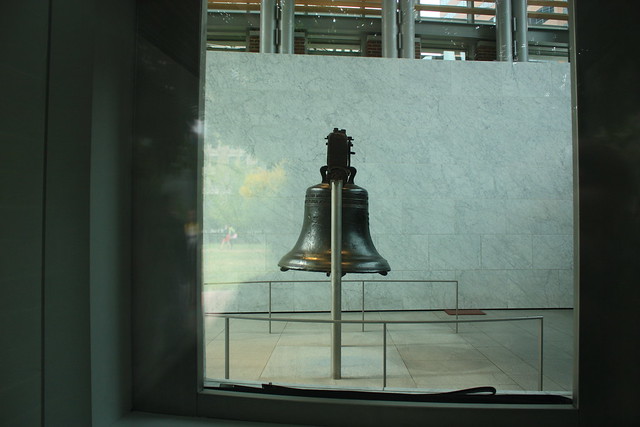 A short while later, a line of people had formed in the alcove. A few of them, in yet another act of futility, pressed an adjacent button in hopes of hearing a bit of audio about the bell’s history. But even the prerecorded messages were silenced – somehow these, too, were included in the furlough (which was baffling. Close the parks, if you must, but why disable an audio station? Why shut down a website? What on earth does that accomplish?) 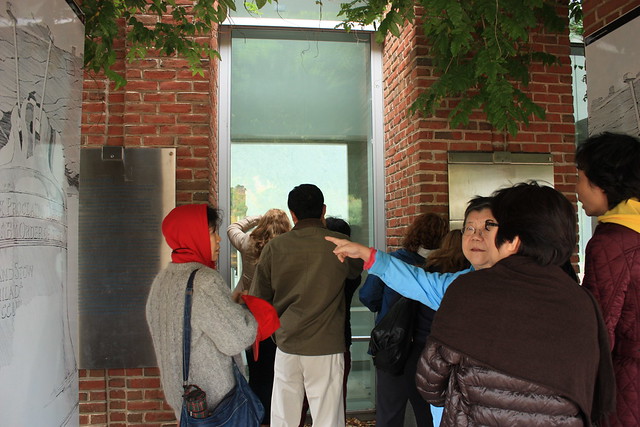 The line to see the Liberty Bell through a small side window. 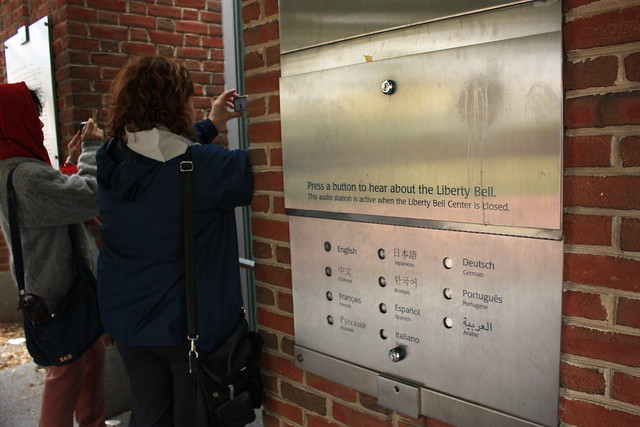 There was little else to see, and it was rather cold, so I headed towards the Constitution Center. The many signs and sandwich boards made it clear: it was open. 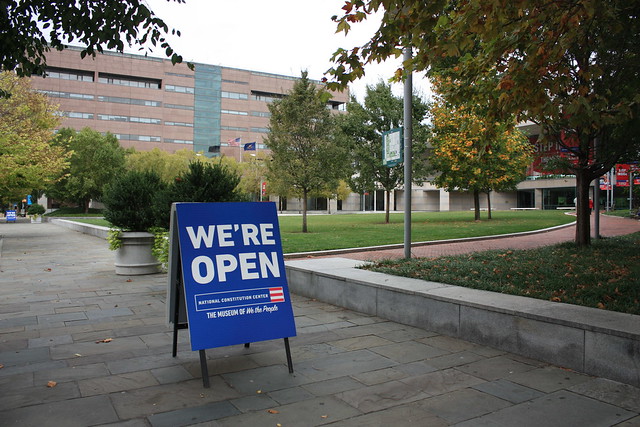 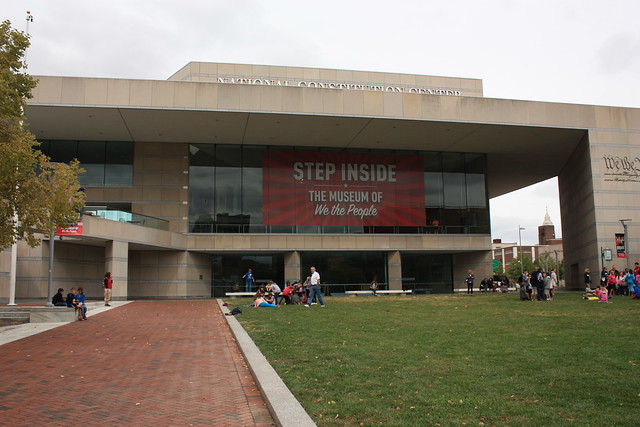 This didn’t mean that attendance was booming, mind you. The place was nearly deserted. I’d heard good things about one of their new temporary exhibits – a collection of Pulitzer Prize photos. But once again I was thwarted – it was a press-only preview.

No problem, I told myself, and instead stood in line for Freedom Rising, the live-action, multimedia show. I was the only one there, though, so they cancelled the noon show.

Not to be deterred, I headed upstairs and wandered through the Signer’s Hall. Here you can walk among life-size bronze statues of the 42 signers of the Constitution (as well as a few dissenters). James Madison, I found, was a rather wee man, barely taller than I am. 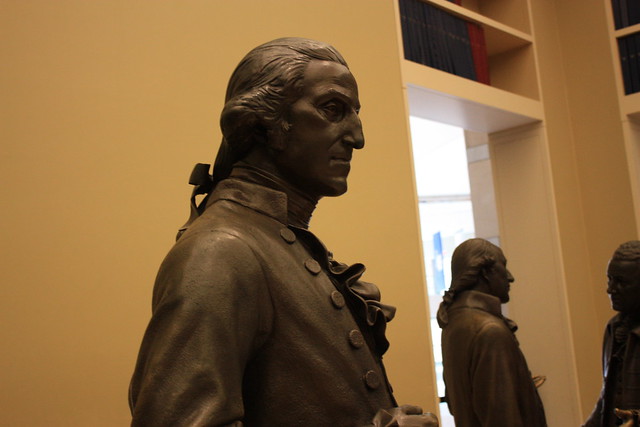 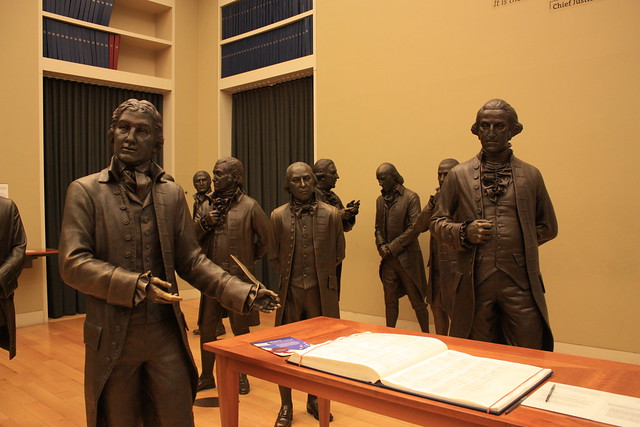 At dead center you can see Madison, a good head shorter than Washington.

The center also features one of the few copies of the first public printing of the Constitution (this one appeared in a local Philadelphia newspaper). There are fewer than 20 such copies in the world. Here’s the clincher, though: it wasn’t on display. Due to its age, it frequently needs to be taken off display and rested, and it just so happened that this was one of those times. 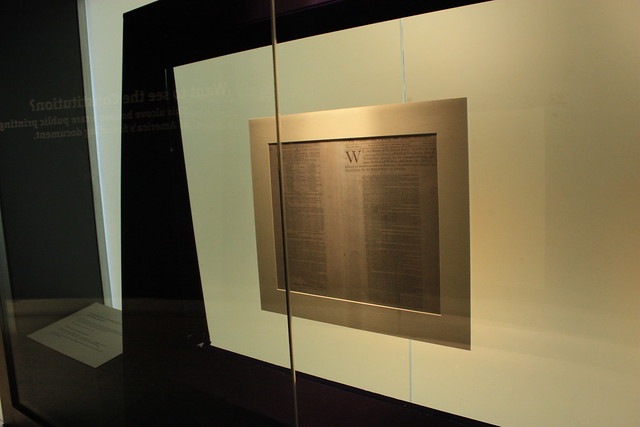 A copy of the newspaper in which the Constitution was first publicly printed.

From a history standpoint, my trip to Philadelphia was turning out to be a bit of a bust. Closed building after closed building, and now a replica of the first public printing of the Constitution. I could hear yelling from the gentleman who happened upon it just after me.

“This is the only place that’s open and they don’t even have the real thing on display!” 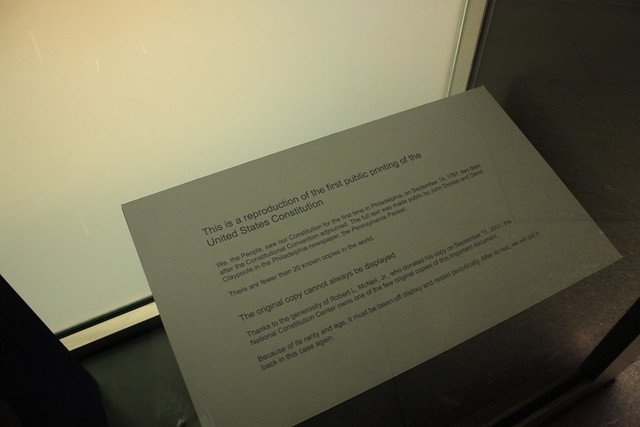 Is it wrong if I smiled a little when I found I wasn’t the only one feeling a little disappointed? 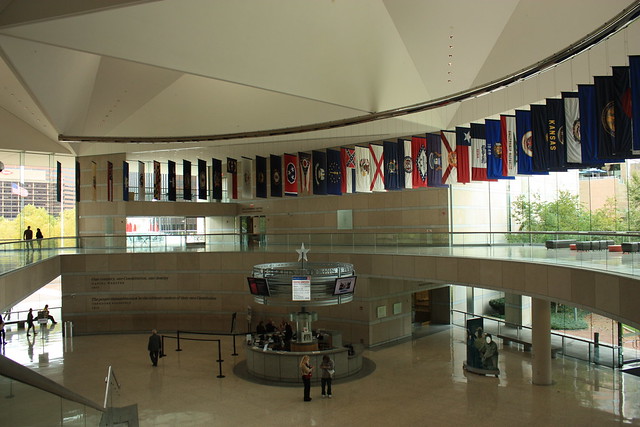 To the Constitution Center’s credit, the rest of the permanent exhibits are pretty great. I eventually did get to see Freedom Rising, which caused me to get all emotional and really excited about the fact that I can vote. And there’s The Story of We The People, an interactive exhibit featuring artifacts from the nation’s history. Among them: a candle holder that had been used by doctors examining Lincoln’s fatal wound, shackles worn by actual slaves, Sandra Day O’Connor’s judicial robe, and the infamous Florida butterfly ballot from 2000 (which was so confusing, I would have voted for Buchanan, too).

Sadly, they don’t allow photos in this part of the exhibit. I tried my damnedest, though. 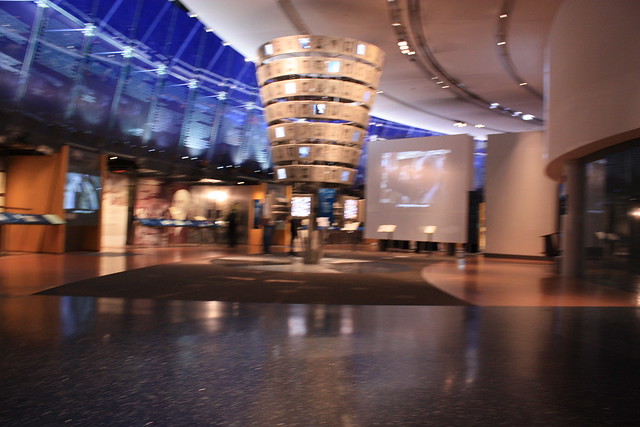 The blurry image that resulted became a sort of metaphor for my adventures that day. You can try, during a government shutdown, to see historical sites in Philly. And if you are determined enough, you will have something to show for it. 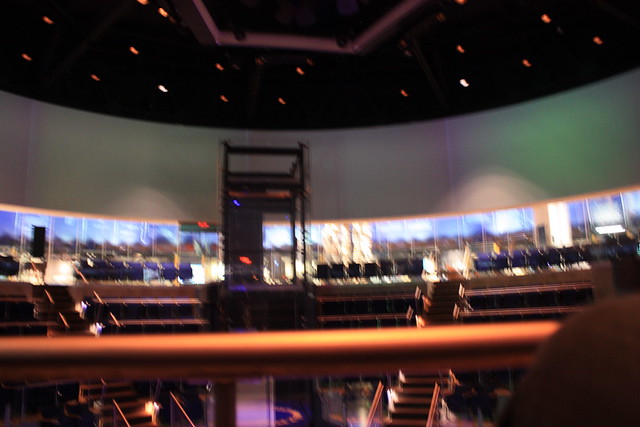 Blurry and unfocused as it may be.