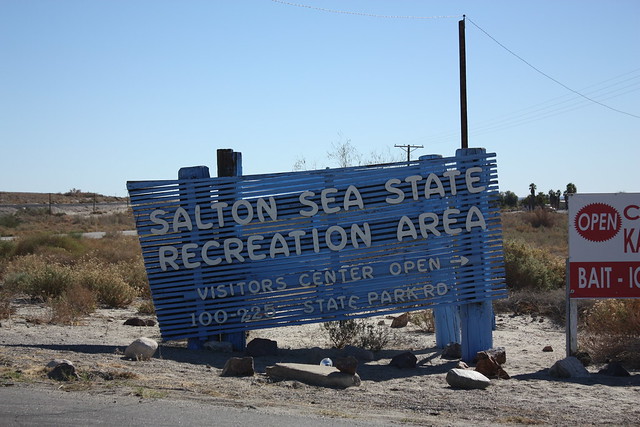 From the moment Rand told me about the Salton Sea, I wanted to go.

I’m probably one of the few people in the last 50 years to have had that sentiment.

The Salton Sea is not a hot getaway destination, or even a particularly nice place to kill a couple of hours, but it used to be. The sea was created by accident at the beginning of the last century. Engineers goofed up an irrigation route from the Colorado river, and flooded an area of the Coachella Valley which then became known as the Salton Sea.

By the 1950s, it had become a prime vacation spot, and was billed as “America’s Riviera”. It’s easy to understand why – it was an ocean in the middle of the desert, just an hour’s drive from Palm Springs. People flocked there, crowding the 80 miles of new, pristine coastline with hotels and cabins, resorts and restaurants. The fishing was supposedly excellent, the beaches white and sandy.

There was one issue, though: there was (and still remains) no flow of water into or out of the sea, except for a bit of agricultural runoff from the nearby areas, which dragged salt and pesticides in. Over the years, the sea began to evaporate, and its salinity and toxicity increased, eventually making it uninhabitable for the many fish and birds that lived there. In the 1970s, fish began to die by the thousands. The once-famous shores of the sea were now white because of their bleached bones.

The clear waters had become murky and polluted. The stench was unbearable. The surrounding town dried up even faster than the sea.

In its prime, millions of people passed through the area. A 2010 census reported that the current population of the Salton Sea is somewhere around 400 people, who live in small cabins and trailers amidst the ruined, abandoned resort buildings.

Supposedly, there were carcasses of fish and birds everywhere. And it still smelled horrible.

Is it any wonder that I just had to see the place?

It was warm and clear on the day we headed out – though that’s par for the course in Palm Springs, I guess. I drove, occasionally pulling off on the long stretches of dusty highway to take a few photos, much to Eric’s chagrin. 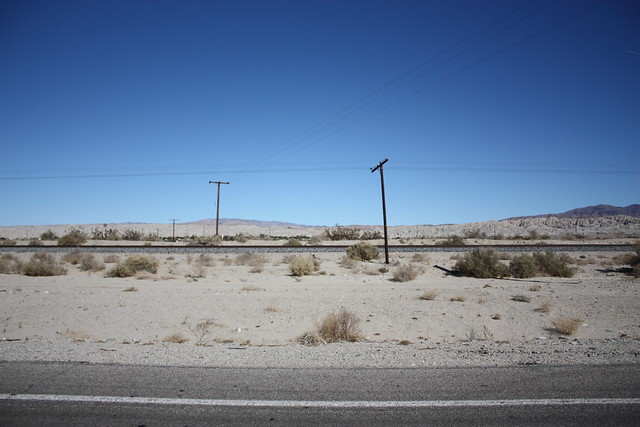 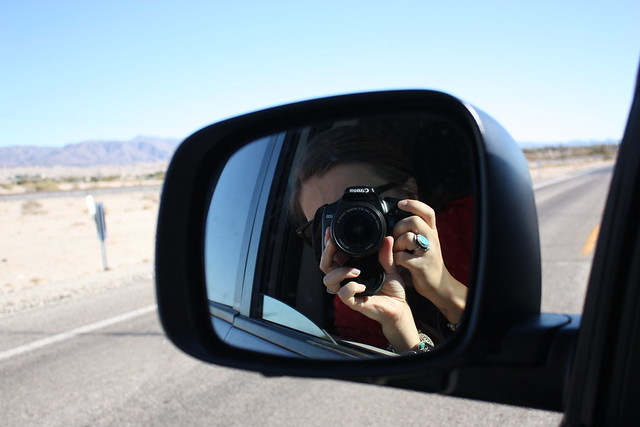 Of course, this was better than me taking photos while driving, which Eric really didn’t appreciate. 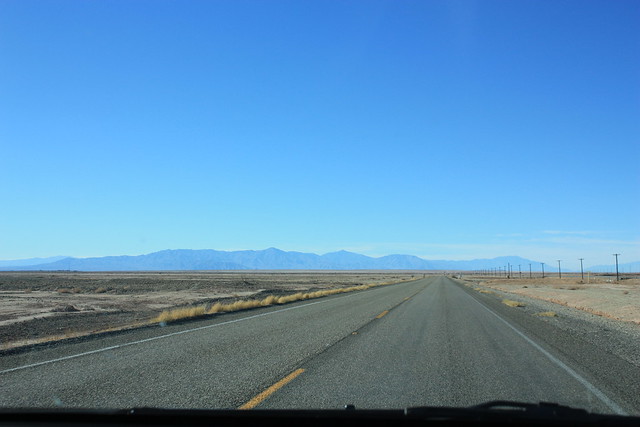 Then, slowly, glittering on the horizon, the sea appeared. 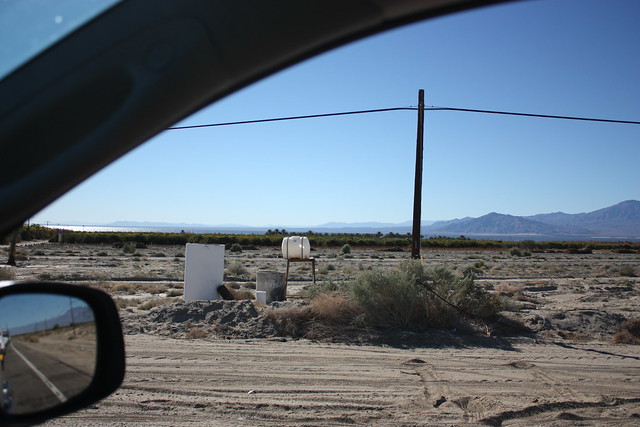 I may have squealed, because that’s what I do.

We stopped at a recreation area but soon determined it was a no-go, owing to a rather creepily specific sign out front.

The good news is that there are no shortage of abandoned areas and empty stretches of coastline at which you can pull over. Finding a spot is not hard. Finding a spot that doesn’t look like some scene out of a post-apocalyptic zombie film is. 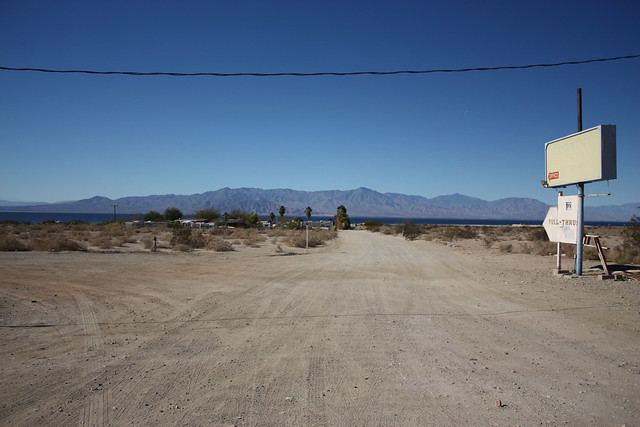 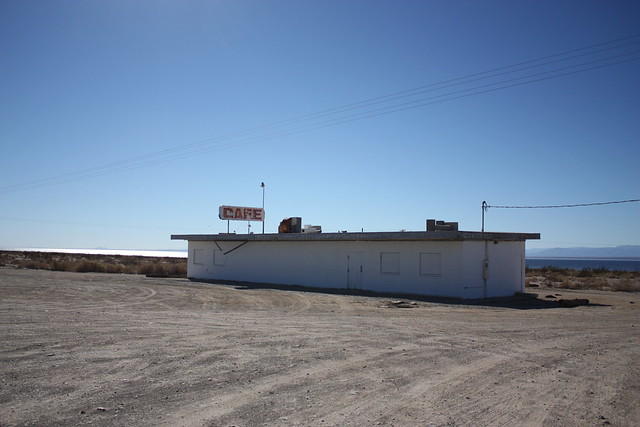 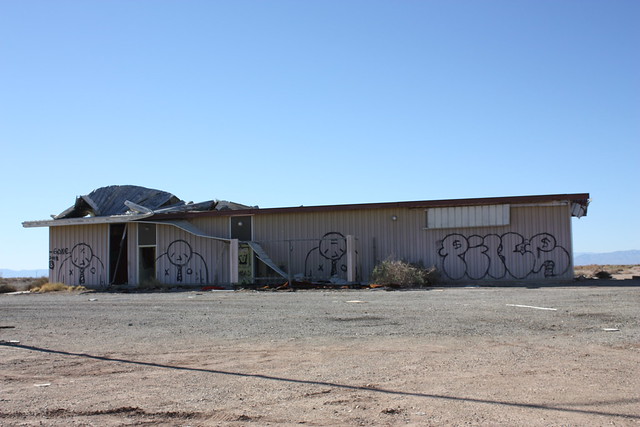 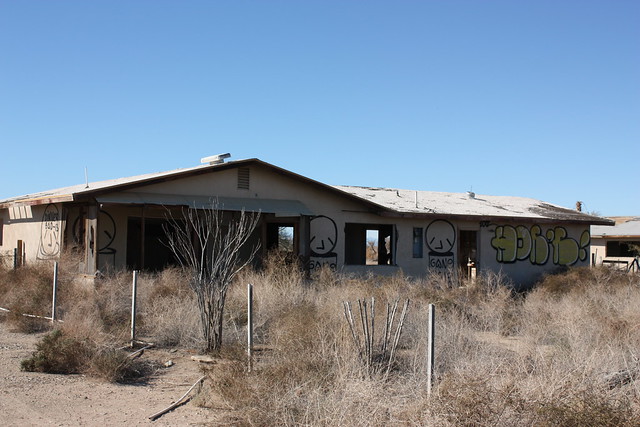 I pulled down a street – I can’t say which, as I doubt it was labeled, and maneuvered the minivan over the cracked road towards the water. We got out. 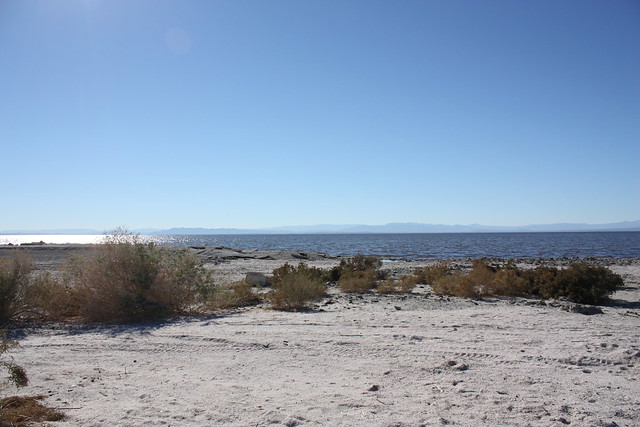 It didn’t smell all that bad, but it wasn’t a particularly hot day. I’ve heard that in the summer, it’s terrible. The sand crunched underneath my feet, and I paused to stare at it. Amazingly, it was just as promised: the crushed skeletons of a seemingly infinite number of fish and birds. 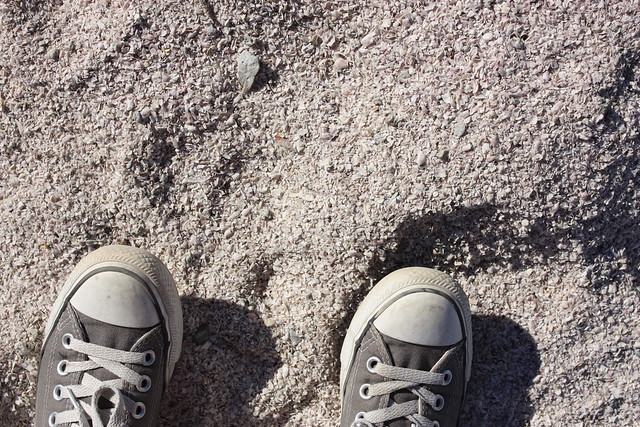 Closer to the water, we found more intact specimens. Hundreds of them. It’s tough to say how long they’d been there. There was a massive die-off in the late 90s, but these seemed more recent casualties than that. 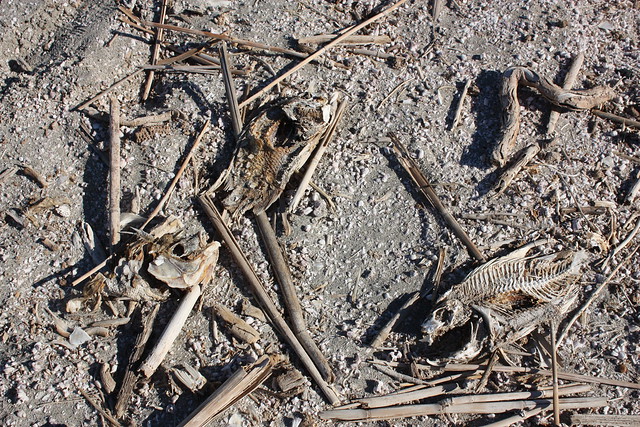 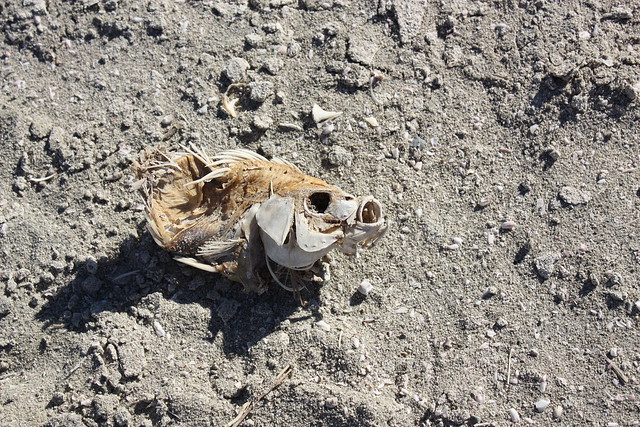 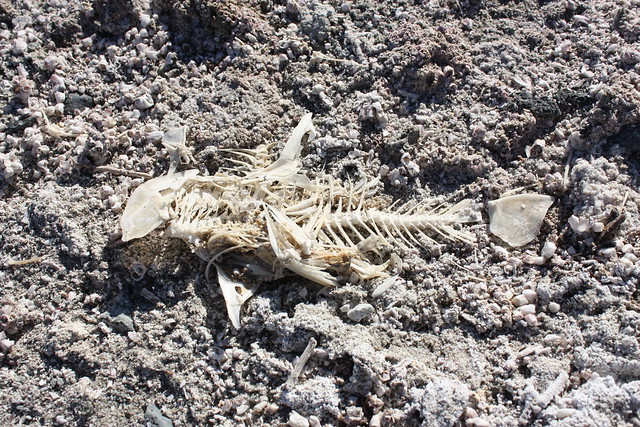 Though the sun was bright on the water, the shore was still unwelcoming, the water murky and green. 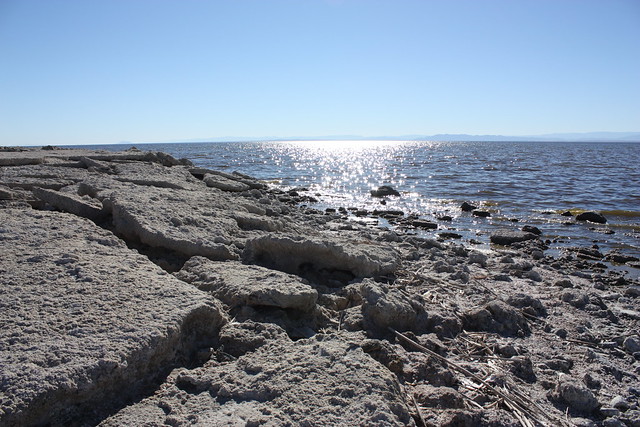 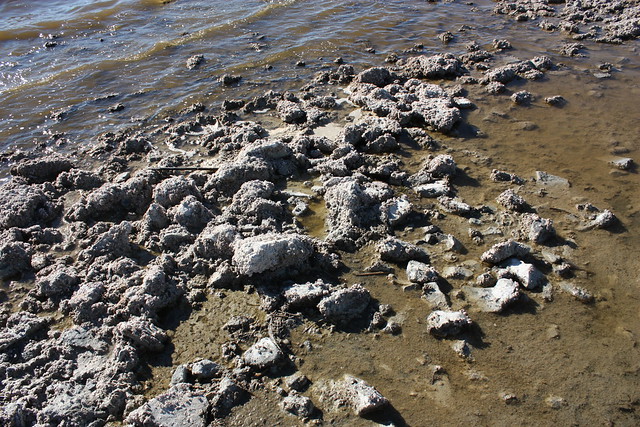 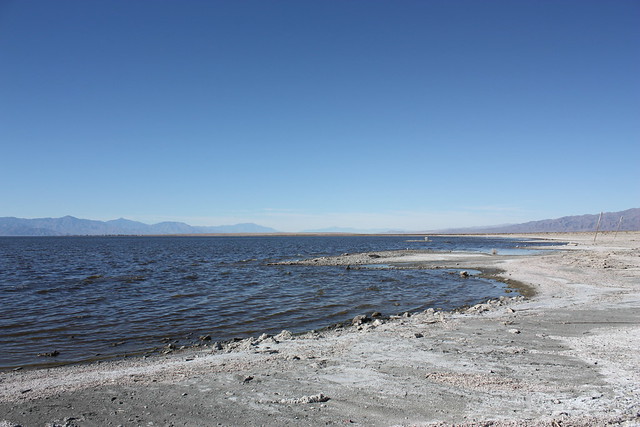 It is wrong to say that the Salton Sea is dead, though. That’s one of the craziest, most misunderstood things about the place: it’s actually teeming with life. Though the conditions did kill of many of the fish, there is a species of Talapia that has managed to survive, even thrive. Occasionally they do still die off in massive quantities, as their life-cycles are intricately connected to those of the algae and bacteria around them, which are far more susceptible to environmental changes.

There is life above the water, too. Two-thirds of all species of birds in the United States can be found here, and it is a crucial rest stop along the Pacific Flyway migratory route. But while it is vital for the birds, it isn’t exactly safe – the toxicity of the place kills scores of them each year. There’s the rub: all of the birds would be doomed without this sanctuary, and with it, some of them still are. 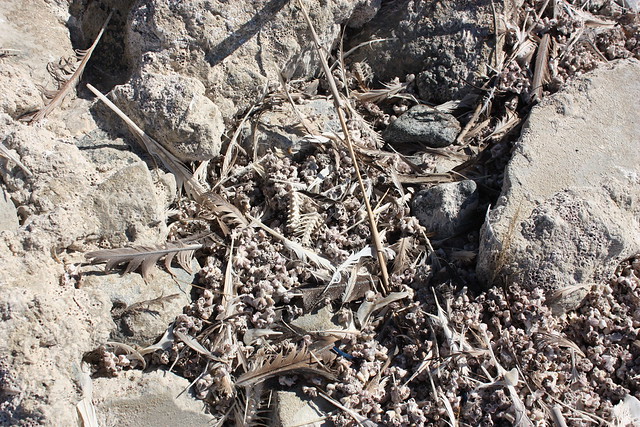 A mass of bones and feathers near the shore.

And so the Salton Sea’s identity and legacy are in a sort of limbo. It’s a man-made catastrophe and a wildlife sanctuary. It’s a toxic dump and a blight on the environment, but it’s a crucial and important ecosystem for countless birds.

We all stared, unsure of what to make of the place. 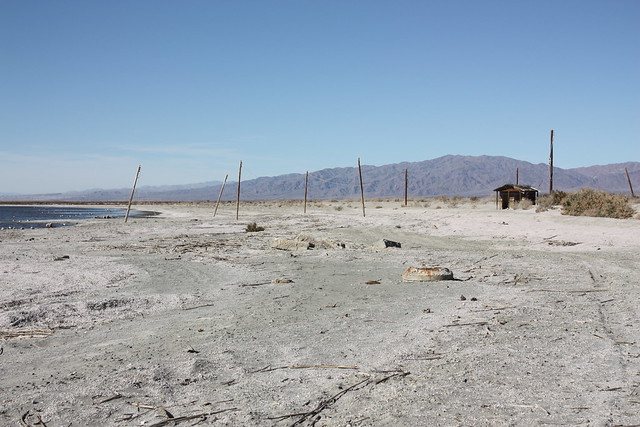 Well, almost all of us. One of us knew precisely how he felt about the Salton Sea. We were at the beach, and that was cause for celebration. Even if he wasn’t allowed to walk around on his own. Or get anywhere close to the water. 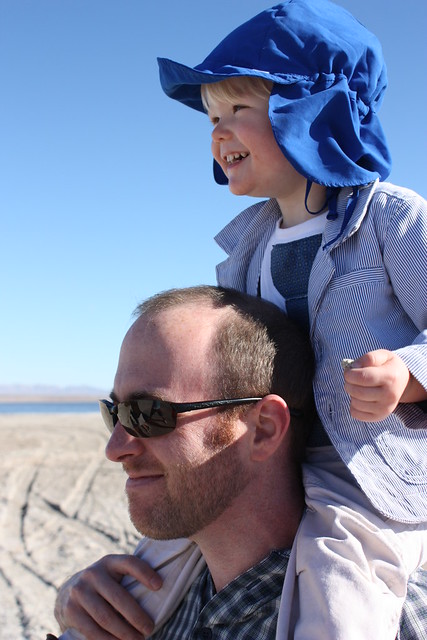 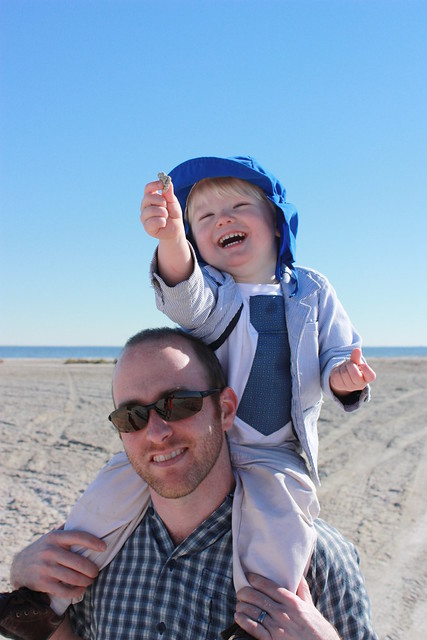 He was really, really excited by this rock he found. 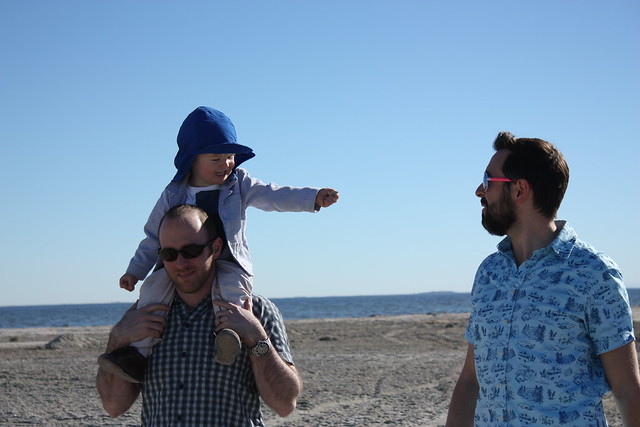 A few moments later he held it out to Rand and commanded, “EAT IT.” Rand, thankfully, did not oblige.

You’d have been hard pressed to convince him that the Salton Sea wasn’t just for the birds.