… but it’s cool if other people do.

I spent the whole weekend thinking about sponsored trips and the question that I posed to all of you on Friday. I read through the comments, I bugged friends about it, I spent long hours picking my husband’s brain. In the end, I think the issue boils down to two things:

How readers of this blog view me.

How I view myself.

Which are fairly heavy things to contemplate for three straight days.

At the end of it all, about 700 people took my poll, but Survey Monkey only showed me data for a sample set of 100 people (because I’m using their free system because I. AM. CHEAP). Of those 100, nearly 90% of folks said I should go for it. The other 10% said not to. 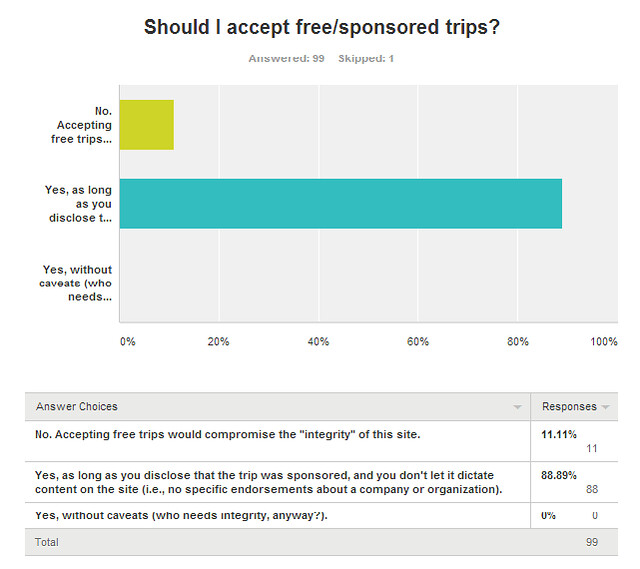 But more important than these answers were the comments, which were numerous and enlightening and really made me think. Thank you all for participating and sharing your ideas with me. Rather than reply in the comments thread of the original post, I figured I’d address things here.

Some of you noted that going on trips might separate me from the original goal of this site – which was to write a love letter to Rand. I thought that was an interesting point, but wasn’t too worried about it: my husband occupies so much of my head and heart, that this blog would be for him, no matter what. If I went on sponsored trips, if I stayed at home all the time, if I switched gears and decided to write exclusively about the comedic stylings of Pauly Shore, this would still all be for him.

Because he’s my biggest fan. Because he reads and loves every word I’ve written, even the ones that are coarse and stupid and not worth reading. If I manage to create anything of beauty during my time on this earth, it will be all his fault.

(Goodness, is someone cutting onions in here? It’s just me? Okay. Ahem. Moving on.)

But then I started thinking about my site’s other mission: to show people that travel is, and should be, possible for everyone. Even if you are just taking a short jaunt to see family, and end up sleeping in a twin bed that you haven’t occupied in 20 years, that’s okay. That’s still travel, and it’s still important. Even if you have a miserable sense of direction and no idea what you are doing, even if you are awkward and scared and don’t fit in at home, must less on the road, you can still venture out into the world.

That’s something I’ve always tried to communicate. And I feel like if all of a sudden things are free, if I no longer have to debate about which activity I should do based on price, or whether I should go to a museum or buy a locally-made chocolate bar, then I’m losing some of the realness and authenticity of the experience. I can’t tell people that anyone can travel if I’m being given perks and discounts that not everyone gets.

The other issue that came up very, very often, was objectivity. And a few very astute readers noted that even if a tourism bureau didn’t ask me for anything specific in return, there would still be a sense of obligation the second I accepted a free trip. And all of my experiences during that trip would be crafted and curated and perfect and shiny, because the people arranging them would want me to have a favorable impression of the place.

There would be no way to avoid that, and the notion of it made me uncomfortable, because, frankly, I like how I see the world.

It’s a general admission seat, admittedly, but still a good one. I’m not in the front row, and I don’t have a box seat, but I have a pretty clear view of the stage, most of the time. Sometimes the show is lousy. Sometimes it breaks my heart. But no matter what, I get to see it for what it really is, and I get to tell you all about it. 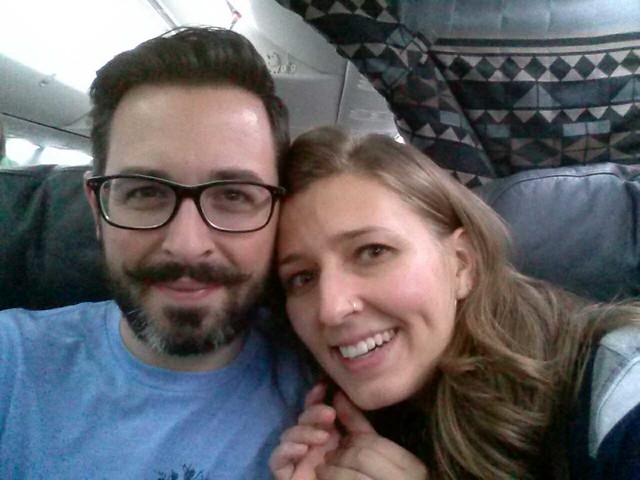 And let’s be fair: can you imagine sitting next to anyone better?

That’s pretty remarkable. And I’m not willing to let go of it. Not yet.

So I’m not going to accept free trips from hotels, or airlines, or travel companies or anything like that.

That’s not to say that if the right opportunity comes along, I won’t take it. Like, if Travel Channel wants to send me around the world in search of the best cupcake, I AM TOTALLY OKAY WITH THAT.  (Are you listening, Travel Channel? I’m waiting for your call) And I will accept certain speaking engagements in exchange for travel to and from the event. I feel like that’s okay, because that feels like a transaction that doesn’t directly impact the blog.

Some people might disagree with that, and that’s okay. In the end, this is about me – what I can live with, and what I can’t. There are no absolutes here, no universal truths. I’m not making some big proclamation against bloggers who take sponsored trips. Many people who I respect and love and consider friends do it all the time. I think that is great and works wonderfully for them.

But they’re often creating amazing and comprehensive guides to cities, or writing books, or reviewing something specific; they aren’t trying to demystify travel by revealing they are massive and colossal fuck-ups, like I am. All day, every day.

So that’s what we’re left with. The destinations might not be all that interesting. I might visit the same cities again and again, because that’s where Rand’s work will take us. But whatever appears on this blog will be 100% Everywhereist. Powered, but not sponsored, by cupcakes.

Welcome to the show. I hope you like your seat.