My apologies for the quality of images in this post. Many of them were taken with my cell phone, because I was too busy eating to be bothered with my SLR. 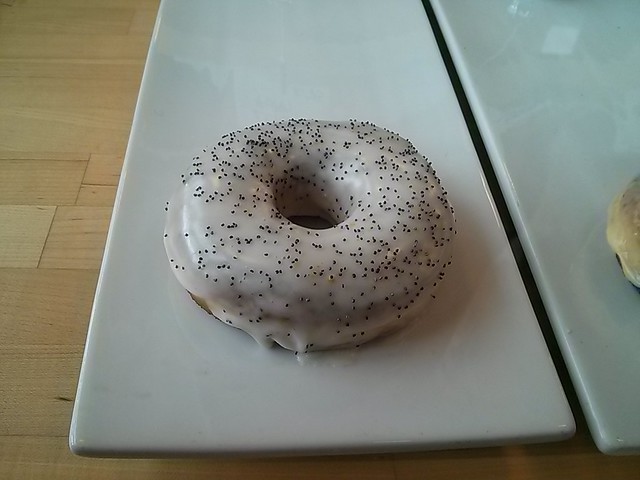 I have been told on more than one occasion that I am not unlike a hobbit. I’ve always figured this was less to do with the size and furriness of my feet (they are rather small, and for the most part hairless, save for something that is happening on each of my big toes. Let us not speak of that.), and more to do with my inclination to eat at least one breakfast, and often to have two, and then perhaps Elevensies, all of which really help to tide a gal over to lunch.

If I don’t eat at regular intervals, I become unpleasant and reminiscent of another Lord of The Rings character … what’s his name? The one with the creepy voice that nobody likes? Sauron. Yes. I become a bit Sauron-like, and Rand soon learned the importance of snacking to the preservation of our marriage.

In this respect, things have always been a bit dicey when we visit Portland. The entire city is thoroughly enamored with breakfast, and brunch, and all permutations thereof, so getting in to any restaurant without incurring a huge wait (and thus my wrath) is a bit of a challenge.

Over the years, Rand has come up with a fairly good work around: doughnuts. They serve as first breakfast, they calm the rage within my stomach, and I am suddenly pleasant and patient as I wait for the next meal.

Our favorite spot for first breakfast is Blue Star Donuts. 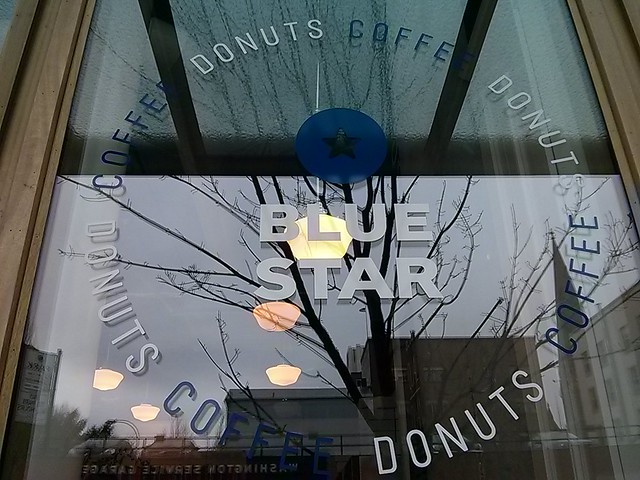 Rather unjustly, when the issue of doughnuts in Portland comes up, Blue Star is often overlooked. For years, the biggest name in fried rings in the Rose City has always been Voodoo Doughnuts. Anthony Bourdain visited there a few years back, and ever since, Voodoo has had a line out the door and around the corner. Their premise isn’t terrible – a kind of trashy, stoner’s delight, they anoint their doughnuts with all manner of toppings – cereals, Oreo cookies, and, at one time, even NyQuil (the last foray got them in trouble with the FDA, and garnered them a ton of press). They were at the forefront of the bacon-on-maple-bars trend, proving once again that if it’s popular, Portland did it first. 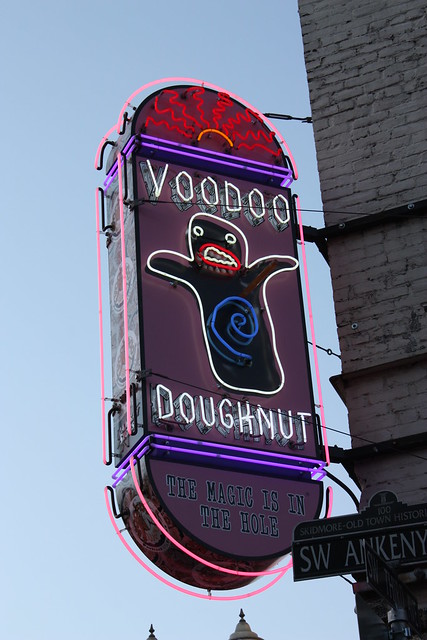 Our first visit to Voodoo was close to a decade ago. We left rather disappointed – neither of our doughnuts were particularly fresh. Mine was topped with stale Cap’n Crunch. Rand had opted for a peanut butter-chocolate-Oreo extravaganza, which proved too rich to eat. In Voodoo’s defense, they upped their game in recent years, but we also started visiting there while slightly drunk (they are wisely open 24 hours a day). This has improved our impression of the place substantially. Voodoo now makes a decent, if slightly rib-sticking doughnut.

But they don’t really hold a candle to Blue Star. Some would argue that the debate simply falls down the lines of preference between cake and yeast doughnuts,  but I don’t think that’s the case. Indeed, Blue Star only serves the latter, and Voodoo serves both, but I’ve always preferred cake doughnuts, and I still think the Star is superior.

The process is simple – they mostly make one kind of doughnut – an airy loop that emerges from the fryer golden and uniform. It’s perfectly executed, and alarmingly fresh, sure, but the real magic lies in the glazes – in flavors both high brow (passion fruit cocoa nibs) and familiar (cinnamon and vanilla sugar). Satiny smooth and shiny, they barely have a chance to set before they are served.

There are a few filled doughnuts to choose from as well – there’s one that’s akin to a Boston Cream pie, filled with a rich custard, glazed with chocolate frosting, and topped with tiny spheres of chocolate-covered-crisped-rice, or their take on the PB & J – a gooey, not-too-sweet jam on the inside, a dusting of peanuts on the outside.

There aren’t that many to choose from, and so I’ve tried many of them, and I can tell you, even among the chocolate and the creams, the decadence and the fillings, my favorite is the blueberry bourbon basil. 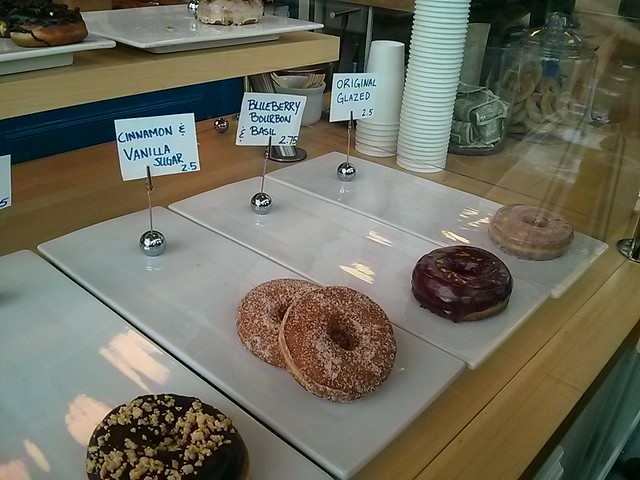 It tastes like summer in Oregon. It reminds me of the seemingly endless sunlit days that surrounded my wedding. It makes me think I’ll never fall out of love.

We went to Blue Star twice in the two days we were in Portland last week. The first time, I went with my tried and true favorite. The second time around, I tried the lemon poppy seed.

And here it is again, approximately 30 seconds later: 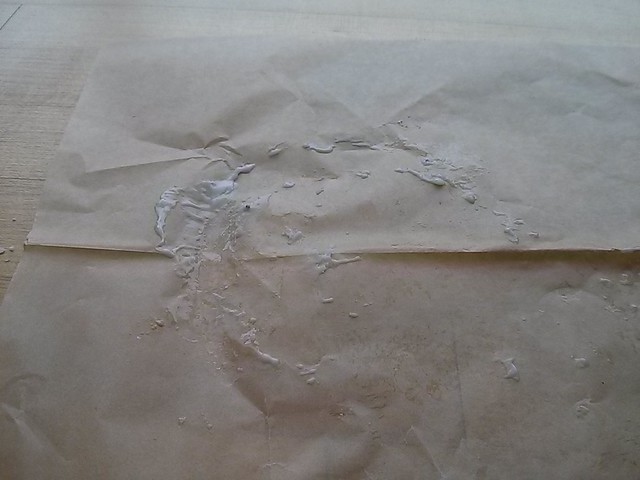 I nearly ate the paper.

To say it was inhaled would not be much of an exaggeration, and even so, it wasn’t quite as good as the one that had preceded it the day before. The lemon glaze was lovely and tart, but almost overwhelmed the delicate doughnut. But this me splitting hairs, or perhaps splitting poppy seeds: if you try it, it will still be one of the better doughnuts of your life.

For a long time, Rand and I held Blue Star close to the heart, a secret we divulged to friends and loved ones, but, selfishly, never something we wrote about, for fear it would become overrun. This was a futile exercise. Word has gotten out. This was the scene at Blue Star last Saturday morning: 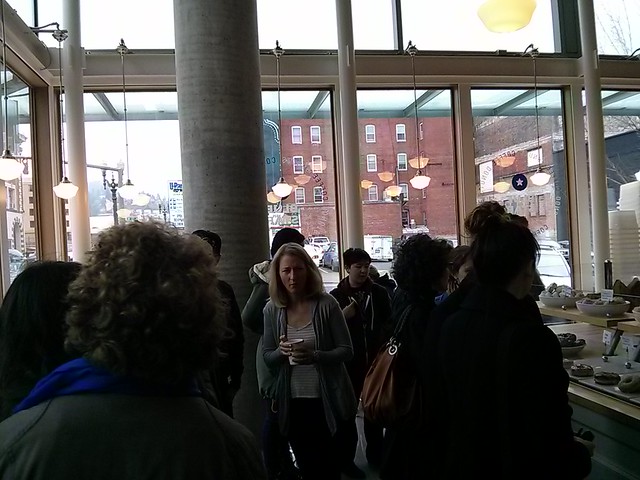 And so now that Portland knows, it seems only fair to tell the rest of you: skip the pink box palace of Voodoo, and go to Blue Star. 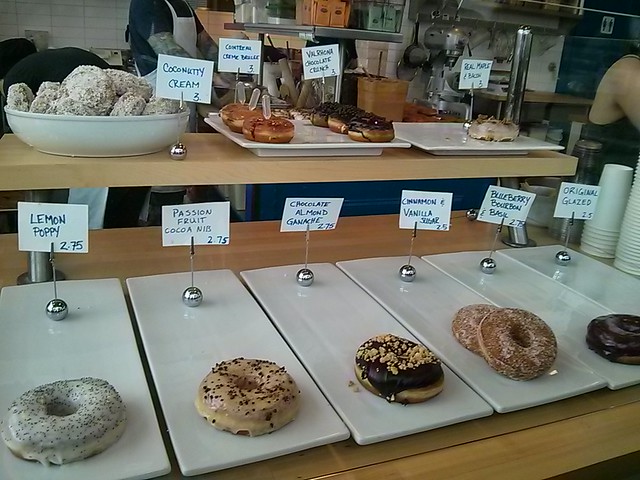 And if you happen to find yourself in line ahead of me, be a dear, and don’t take the last blueberry bourbon basil.