I’ve been thinking a lot about Malaysia Airlines flight 370 which went missing days ago. I suppose everyone has. It’s strange and sad, and right now it’s an open-ended mystery, which I think must be excruciating for the family members of the 239 people who were on board.

I honestly can’t imagine anything worse that not knowing. 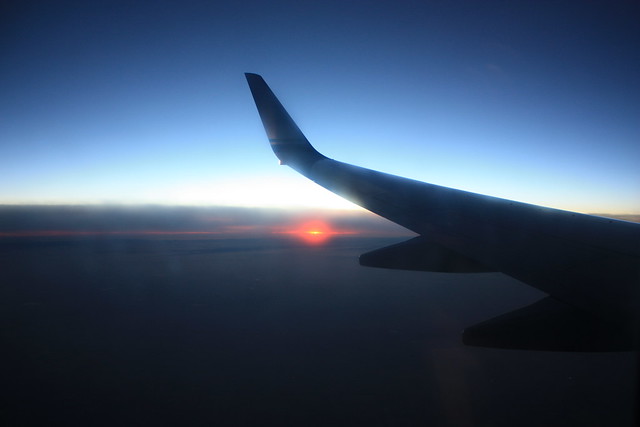 Sunset on our flight coming back from Palm Springs.

I am not a nervous flyer. It’s hard to be with Rand. He constantly spouts out facts (or, at least, I assume they are facts. I’ve never bothered to check, because he says them with such confidence. And perhaps that’s for the best) about how flying is far safer than driving. About the infinitesimal odds of being in a plane accident. About how there is absolutely nothing to worry about.

Most of the time, I believe him. I dread turbulence not because I’m afraid we’ll fall out of the sky, but rather because I will inevitably start feeling sick. My concerns are not when I fly with him, or even when I fly alone. But when Rand takes a flight without me, I get nervous. I feel like facing the issue of my own mortality is way easier than facing the issue of Rand’s.

And so, when he leaves without me, I think about the million things that could go wrong (even though they rarely do). I check news sites when he’s up in the air, to make sure that nothing catastrophic has happened. If I don’t hear from him when I’m supposed to, it is always because of something innocuous. His flight was delayed before takeoff, or after, or, for some reason, his text just didn’t go through. But there is always a split second of worry. A few fleeting seconds where I wonder if he’s okay.

I can’t imagine those seconds stretching into days, and knowing that, short of a miracle, the outcome will not be a happy one.

Since flight 370, Rand has been on three flights, each without me. And despite those few seconds of concern, I know that he’ll come back, safe and sound. It’s happened so often, I accept it as a fact. As almost inevitable.

I accept it as such a given that if something catastrophic did happen, I know I wouldn’t really be able to grasp it. I’d hold on to the belief that he was okay, until I had factual information otherwise. I know, because I do it with matters that don’t pertain to him – I genuinely believe in the best possible outcome, no matter how unlikely, until I have hard evidence to the contrary.

I think that’s why this missing flight has occupied so much of my heart and mind these last few days. Perhaps it’s naivete or perhaps it’s optimism. But I still hold out a crazy hope that all of those missing people are absolutely fine. Which is just ludicrous.

This was the conversation I had with Rand last night, as we were getting ready for bed:

“Do you think those people on that flight are dead?”

“They almost certainly are.”

“So there’s no chance they’re alive?”

At this point in the conversation, Rand sighed, put his toothbrush down, and looked at me.

But I still need proof, before I can actually abandon all hope. I know that’s stupid. I realize how illogical it is. Because honestly, I think that having hope, when there is absolutely zero reason to have any, sets yourself up for even greater heartache.

And that is, really, one of the saddest things I can think of.