Italian lunchtimes proved difficult for us. Jet lag meant we weren’t hungry until 3 pm or so, and by then, everything was closed. So we spent most afternoons wandering around in a fog of hanger, snapping at each other until we found a gelateria to hold us off until dinner. It wasn’t our finest travel moment.

By the time we left Villa Rufolo, we found that it was once again too late for lunch. The first few restaurants we stopped by were closed until 5pm. 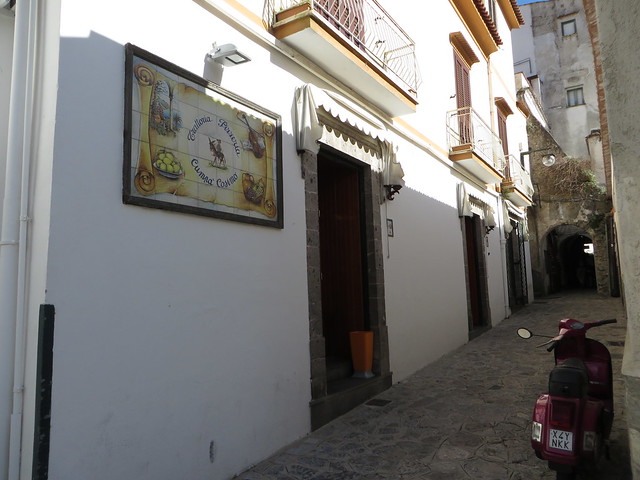 Miraculously, though, Trattoria Cumpa Cosimo was open. I can’t remember how we found it – if Rand had managed to get enough cell phone reception up in Ravello to look it up, or if it was just dumb luck. But when we tried the door, it yielded, and when I nervously asked a waitress if the kitchen was still open, she looked at me like I had inquired if they had walls.

So please, mark this one in your notes, folks: there is a place in Ravello where a starving pair of jet lagged tourists can eat lunch at 3 pm. And it’s quite good, actually.

Trattorias are less formal than restaurants. You can often arrive in jeans and without a reservation. The tablecloth might be fabric, but the napkins will be paper. The food will most likely be simple – our meal was. There were only a handful of pastas to choose from, several pizzas, a few unfrilly secondi and contorni.

And we were perfectly okay with that. 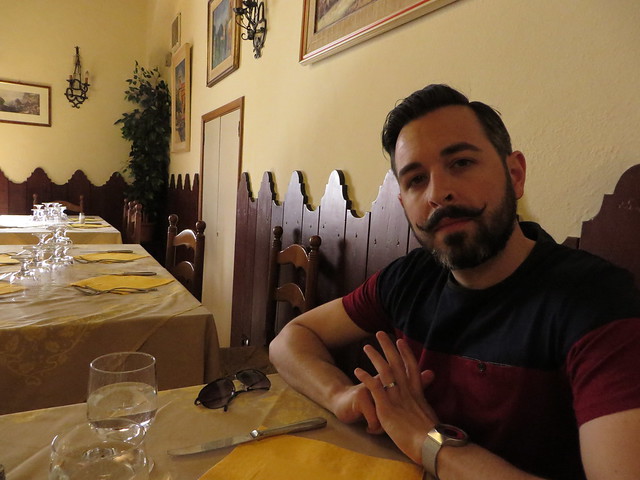 My husband, who, despite his hunger, did not start nibbling on the napkin. #willpower

Before our entrees arrived, our server brought out a plate of affettati – the Italian equivalent of cold cuts – and placed it on our table without comment or explanation. I bristled when I first saw it – not because I dislike cured meats (on the contrary), but because I suspected that this unasked-for addition would be the justification for a substantial “cover charge” on our bill. 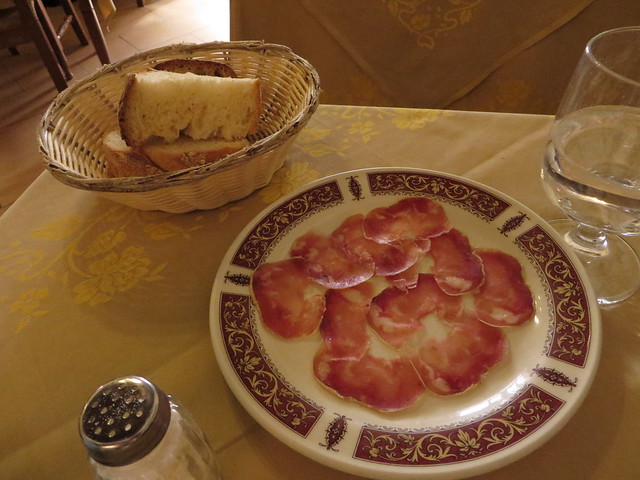 I stared, starved but refusing to touch the thin slices of salami, until I realized that we were going to have to pay the charge whether I ate them or not.

So I helped Rand clean the plate. And the bread basket, too.

Next came a massive salad, which the two of us split. I neglected to take photos of it, but it was simple, as most salads in Italy are (unless you specify otherwise). Massive lettuce leaves, torn and piled on a plate, accompanied by small bottles of olive oil and vinegar so that we could dress it ourselves.

And then our pastas arrived. I ordered gnocchi. They were smaller than I am used to, and surprisingly light. I had to remind myself to chew, rather than shovel them directly down my gullet. The red sauce surrounding them was thin and a little tart, and there were globs of fresh mozzarella throughout. 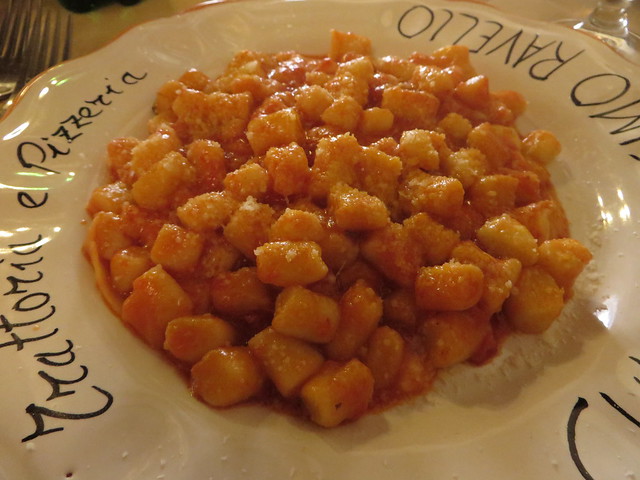 Rand got the fusilli – hand-rolled, and perfectly chewy: 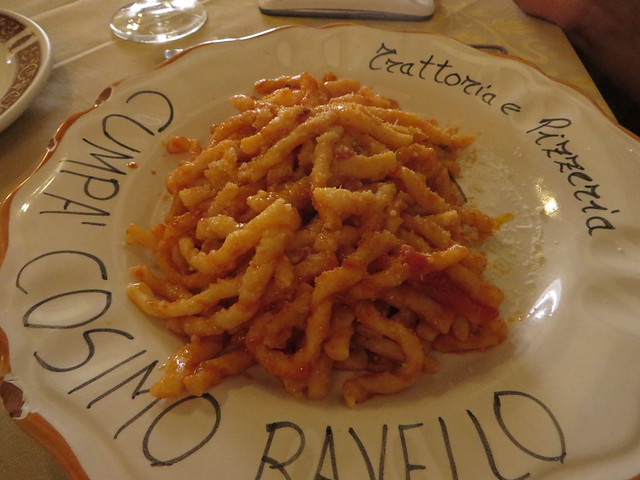 We declined dessert, but our server dropped off a little sliver of sponge cake, nevertheless. It was light and not-too-sweet, surrounded by a bit of orange-scented whipped cream. Rand declared it the perfect amount of dessert, and while I usually prefer my sweets to be roughly the size of football, I had to agree. We were able to polish off every bite without feeling overly full. 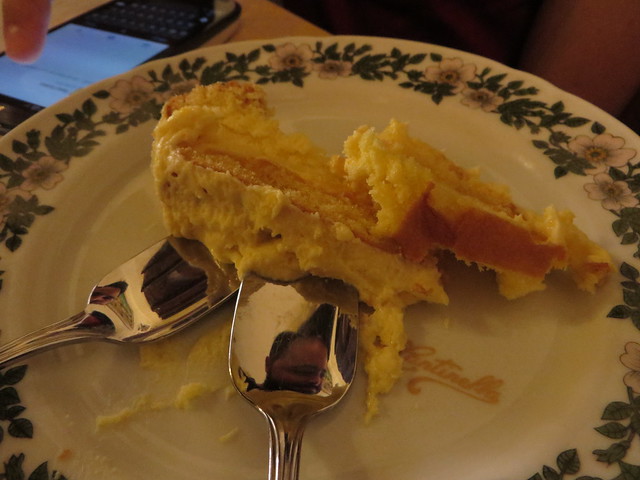 Our bill arrived, along with two chilled oranges. Our server (who seemed to be the proprietor of the place as well) explained that they came from the tree in the garden out back. Later, Rand ate one and declared it the best orange he’d ever had. 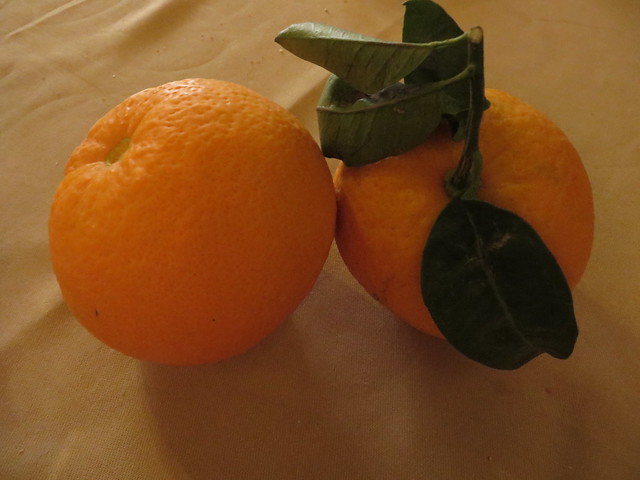 I glanced at the check, bracing myself for a massive service charge. There was done. No added cost for the bread, or the affettati, or the tiny dessert. Just the cost our entrees and salad and drinks. It was less than 40 euros.

It wasn’t the best meal of our trip, I suppose. The menu wasn’t flashy, and the place itself was unremarkable save for the fact that it was open at 3pm. But the food was good and reasonably-priced, the service friendly, and as we sat there in the late afternoon, enjoying a lazy meal, I reasoned that there was no place in Ravello that I’d rather be. 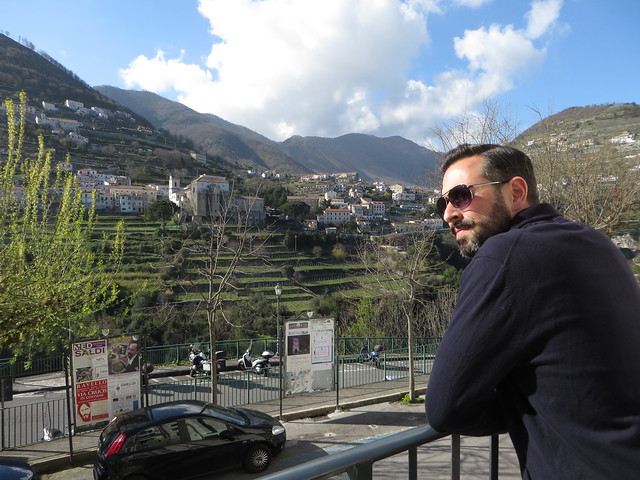