I would like to take a moment to talk about durian.

I have to. I have spent the larger part of the morning working on a post about the Khmer Rouge, and I very much need a mental break, and talking about stinky fruit will allow for that to happen.

The stuff is notorious, and you’ve probably heard of it. Miraculously, I somehow failed to take a photo of the inside of the fruit (I think I was hypnotized by the smell) but here is its exterior: 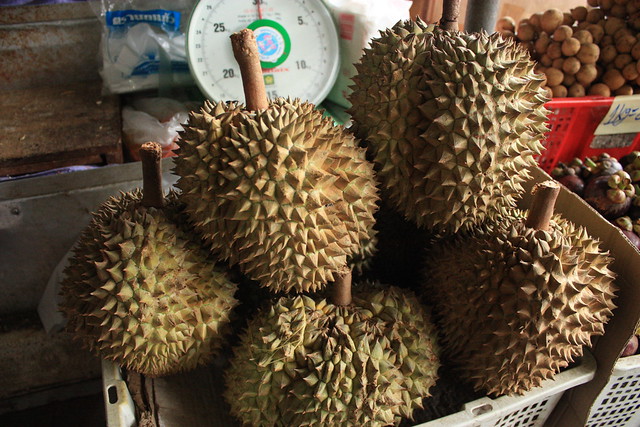 I like to think of the spikes as being Mother Nature’s subtle way of saying, “Get back. Seriously.”

We tried it, courtesy of Nicci’s boyfriend, Eddie, while sitting poolside at our hotel in Siem Reap. There were a few pale-yellow pods, shaped almost like wedges of an orange, but bigger, fatter, and less juicy.

The texture was creamy and custardy and a bit stringy, like a mango.

But that isn’t what you want to know. You don’t care what the durian looked like. You probably don’t care about the texture. You just want to know what it tasted like, right?

Truth be told, it’s hard to describe. People often say it tastes “footy”, but I don’t think that’s terribly accurate (or maybe it’s that I don’t really know what feet taste like). Eddie described it best – it was like eating a cherimoya soaked in garlic butter. It was creamy and sweet and buttery, like a crème brûlée (in color and texture, too, interestingly enough), but there was a distinct additional flavor that made the experience far less enjoyable and far more memorable.

Some describe it as strangely savory (like Eddie’s garlic-butter comment), which isn’t too far off base. Others say footy. I would say vaguely rancid, as though the cream used to make this particular crème brûlée had a not-so-fresh onion floating in it.

I didn’t notice it initially – gobbling it up and (I now wince at the memory), licking my fingers and going back for more. This image is not sweetened by the fact that I was wearing a bathing suit at the time. The girls who hated me in high school would have relished at the scene of me in a too-small bikini, gorging on stinkfruit.

“Me neither,” Eddie agreed.

They looked at me as though I was insane, and in hindsight, I was. I was drunk on stinky fruit. I ate another piece, but by now the slightly rotten taste was beginning to catch up with me. The aftertaste was awful.

I would burp, repeatedly, over the next few hours, and disgust myself.

Durian is actually quite hard to find in a lot of places in Cambodia. Restaurants won’t carry it, people won’t buy it – it’s simply too pungent to keep on-hand. Nicci’s boyfriend purchased some from an open-air market, where we found stacks of it, piled high on blankets. (Later, he would ask one of the women working at our hotel to throw out the rest for him. The look on her face was nothing short of hilarious. She grimaced, holding the bag in between two of her fingers and holding it at arm’s length before walking out of the lobby with it. Bless you, Nga, for that and so many other things.) 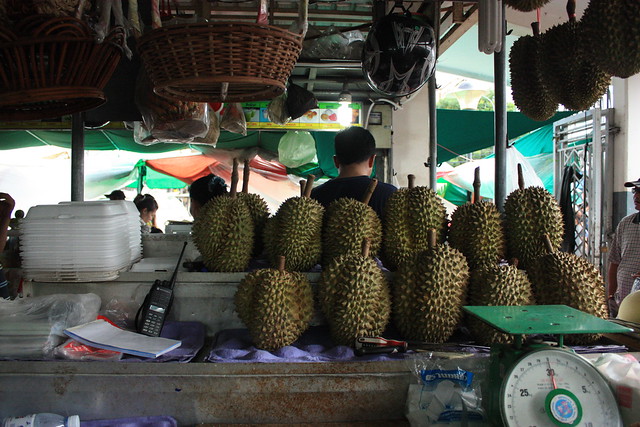 I later realized that it was the smell of durian that had hit me when we first arrived in the country – a mixture of sour milk and rotting fruit.

And because it feels so tied to the country, so iconic and indicative of this region, I won’t tell you to avoid it. It’s something that, if you are in this part of the world, you should try. You need to. But I learned something important.

For most of you, this should be simple. You won’t want to take more than a few bites. But a select handful of you may wish to gobble down far too much, to the disgust of your travel buddies, and, eventually, to your own disgust, too.

You’d think that experience would have been enough to hammer the message home, but it would take one more dalliance with durian (this time in ice cream form), and a 20-hour train ride before I really understood it. And by then, it was far, far too late. But more on that in another post.