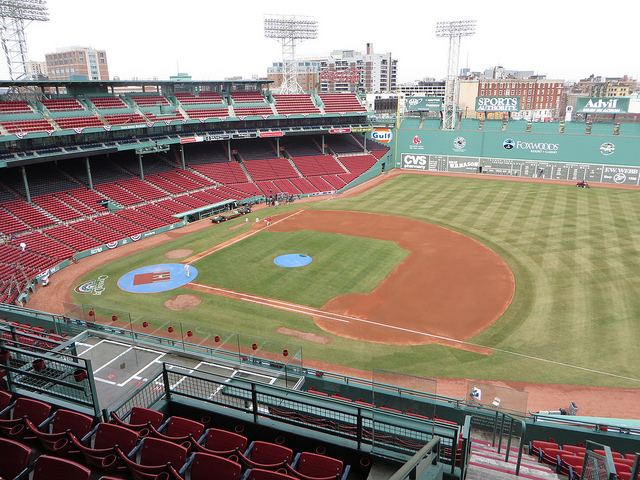 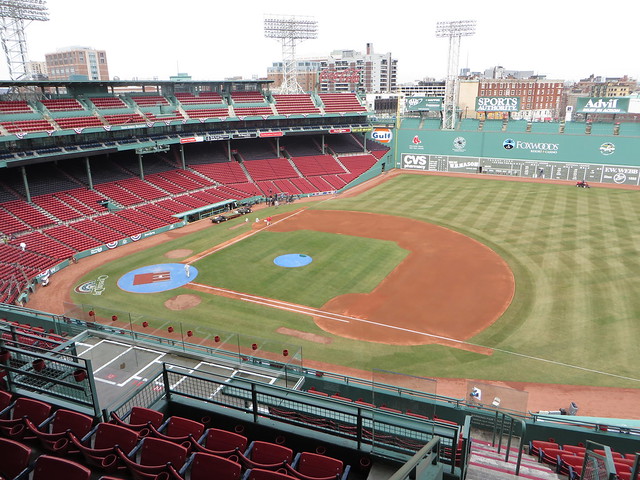 The field at Fenway, with The Green Monster in the background.

Last week an old love of mine got engaged. He is from so far back in my past that there is no trace left of the heartache that followed the relationship – all that remains is the hazy memory that I was sad when it was over.

The news of his engagement makes me smile, but does not make me overly pensive or wistful, the way old loves often do. I suppose this is because we have no unfinished business, no lingering feelings. I have virtually no leftover sentiment from that time, good or bad.

He was not the first or the last boy to break my heart. He was not my first kiss, and he won’t be my last. But it is unfair to say that our relationship didn’t teach me something, about myself, of course (what relationship doesn’t?) but perhaps more importantly, about the Boston Red Sox.

Here is a dirty little secret, a confession that I will share only with you, the anonymous masses of the internet, for all of posterity: when I met him, I was a NY Yankees fan.

I realize how absurd that sounds, and even as I type it, it is surreal to me. That entire period of my life feels as though it happened to someone else (I doubt I am alone in regarding my late teens in that manner). I have tried to explain my actions, time and again. I loved the Mariners, too, of course, and the Yankees ranked second in my heart to them. But even so, I have no idea what I was thinking, and I cringe more at the memory of that damn NY baseball hat than the pajama pants I paired with it (and wore, inexplicably, out in public).

In the end, I blame youthful exuberance.  The bandwagon is such a fun place to be when you are 17.

My boyfriend at the time, a dark-eyed, dark-haired, brilliant young man who was that odd mix of cynical and optimistic (I have a type, it seems), was entirely supportive of my love for microwave popcorn, pink frosted cupcakes, and the Seattle Mariners. But when he found out about my affinity for the Yankees, all hell broke loose.

“No. No. You cannot like the Yankees,” he said.

And he tried, at various intervals, to explain to me what was wrong with them. His grandmother had been from Boston. He was from a long line of Red Sox fans. Any affinity for the Bronx Bombers was counter to his very being.

He pleaded with me. I didn’t understand, but agreed that if I wore a baseball cap around him, it would be my blue Mariners hat, and that helped to create an uneasy peace. Eventually, he would break my heart, a story that does a disservice to both of us.

In the meantime, though, we kissed for long hours, we exchanged far too many stuffed animals, and I think I may have loved him. I tried to understand his viewpoint on things. His vegetarianism befuddled me, and still sort of does. His love for The Beatles was a revelation. And eventually, I came around to understanding that the Yankees are not a team you root for. Rich and popular winners do not need me on their side. If anyone was deserving of unfaltering devotion, it was the perennial losers, the cursed who never quit.

As tempting as it would be to find a parallel in our relationship, there is none. He was the shy bookish type, and I was older and more confident, but it was he who did the dumping.

Still, those years and that time have left their mark, whether I realized it or not. I can appreciate a song without talking over it – something that he first taught me to do. I wear massive scarves and comfortable shoes. And when I found myself in Boston with a free day last spring, I visited Fenway Park. 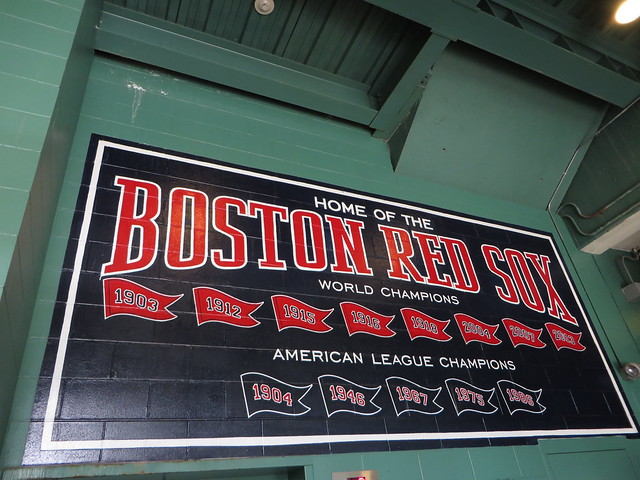 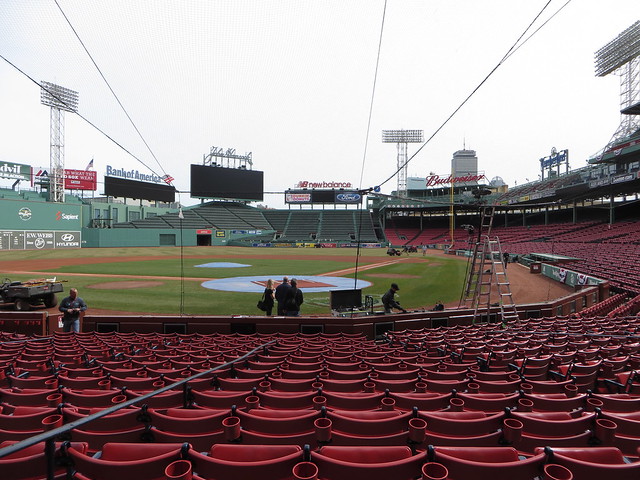 The journey doubtfully would have happened had I not known him, and I am comfortable with that attribution.

It was overcast on the day I went, a bit muggy but not overly so. Even as I approached the stadium I could feel the tortured history of the team playing out, the 86-year curse evident on the banners that hung from the side. From 1918 to 2004, the World Series title would prove elusive. 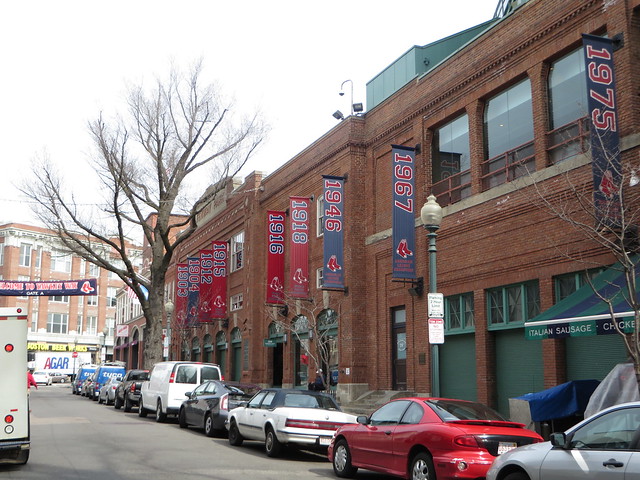 Of course, there are plenty of teams who’ve never won the World Series, period (my own Mariners have never even made it that far). But the drought was more notable for the Boston Red Sox due to the age of the franchise, the notoriety around trading Babe Ruth, and their long-standing rivalry with those damn Yankees.

Boston first won the World Series in 1903 – the team back then was called the Boston Americans (which I find a trifle redundant. I also have comments about the Washington Nationals in this respect). Five years later, “Take Me Out to the Ball Game” was written. The club predates even the mainstays of the sport itself. In that same year, the Red Sox got their name, in a shockingly simple fashion – they bought uniforms from an existing team. The socks happened to be red. 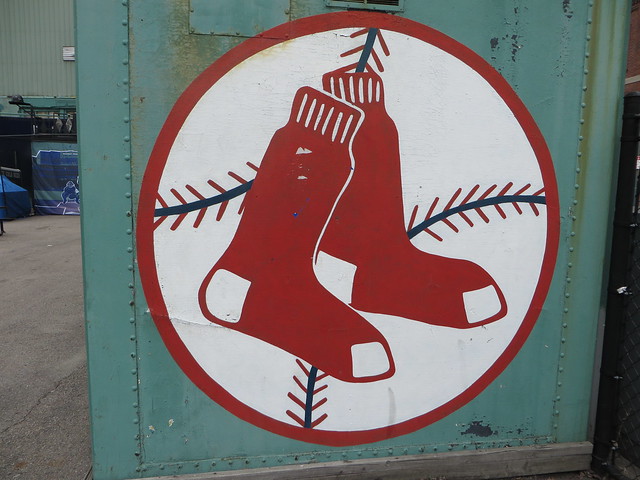 Fenway Park, home of the Red Sox, is the oldest baseball park in the country. It was built in 1912, on a span of marshland known as a “fen” (a word I was unfamiliar with prior to my visit. It is from here that Fenway takes its name). The wooden bleachers sat 27,000. And behind left field a tall wooden fence had been erected so that passersby couldn’t view the game from the street for free. In its present incarnation, it stands at 37′ 2″ tall.

The first professional baseball game was played in the stadium on April 20 of that year, against the New York Highlanders (eventually, the Yankees). The Red Sox were victorious, but the win didn’t make the front page (the leading news story for that edition was the sinking of the Titanic, which had happened 5 days earlier). Two years later, the team acquired Babe Ruth. Ruth would play for the Red Sox for five years, winning the world series three times, in 1915, 1916, and 1918.

In 1919, Henry Frazee, who had owned the Red Sox since 1916, sold Babe Ruth to the New York Yankees. This was the start of what would later become known as the Curse of the Bambino. There are varying accounts to why the sale occurred, most of them being an oversimplification of the fact that Frazee needed money to produce a Broadway show. The actual reason is far more nuanced and complicated. Money was an issue (attendance was also down because of WWI, and Frazee had a number of mortgages on the many theaters he owned), as was Ruth’s behavior (he was a notorious drinker and had a temper. He’d often disappear before practices, and occasionally skipped games entirely). Frazee also had a conflict with the league, which made trading players almost impossible for him.

He eventually sold Babe Ruth and a number of other prominent players to the Yankees (virtually the only team he was actually able to trade with). Over the years, he would continue to deplete the Red Sox roster through sales to their oldest rival. He would sell the Red Sox in 1921, and the team would have its ten worst years in history, both professionally and financially.

In 1934, a man named Tom Yawkey decided, upon inheriting a large sum of money, that he wanted to buy the Red Sox and Fenway Park (which by then had fallen into disrepair). He renovated the stadium, removing the old bleachers and replacing them with chairs made of metal and wood. Some of these chairs are still in use in Fenway. 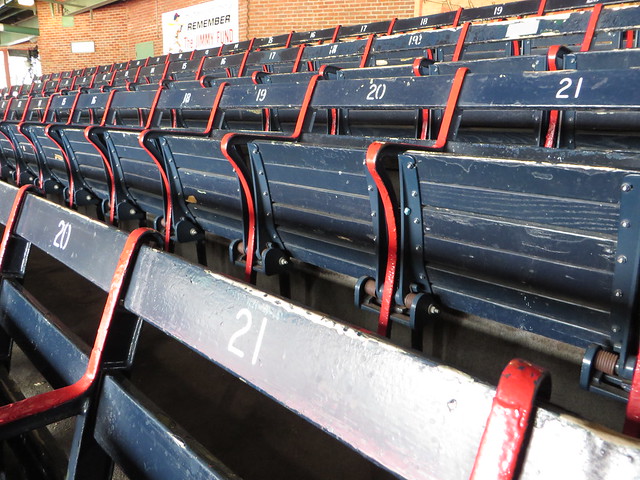 I thought they were really lovely. 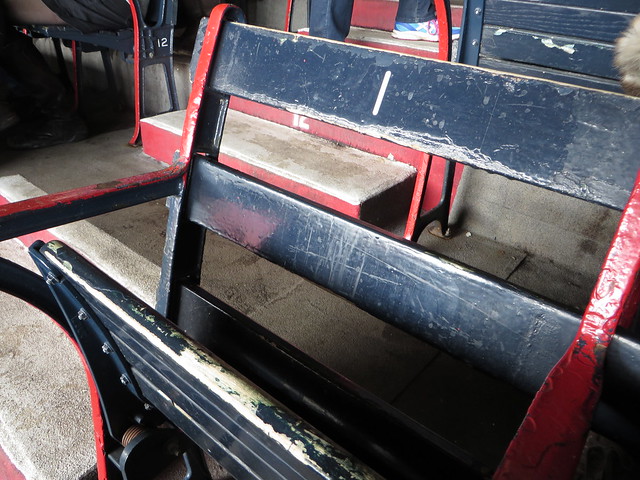 The wooden fence behind left field got a face-lift as well – it was covered in concrete and tin. A manual scoreboard was set into its base, and is still used today. Three people operate the scoreboard from behind the green wall, and if you watch carefully between innings, you can see them running out to change the numbers on the National League scores as well.

“The Wall”, as it was then known, was covered in ads. In 1947, these were scraped off, and it was painted bright green (a color which is now copyrighted). With that renovation The Green Monster, as it is known today, was born. It would get a few more overhauls in the coming years. In the 70s, it was covered in hard plastic. In 2003, seats were added to the top.

Here’s the view looking at the field from the top of The Green Monster: 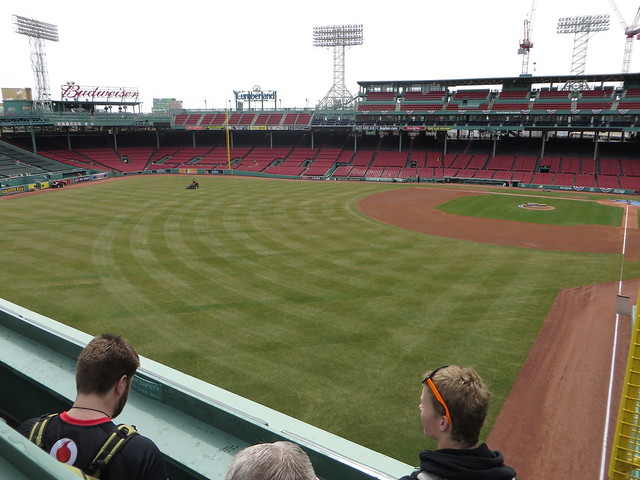 And here’s the view looking down, which is a bit dizzying: 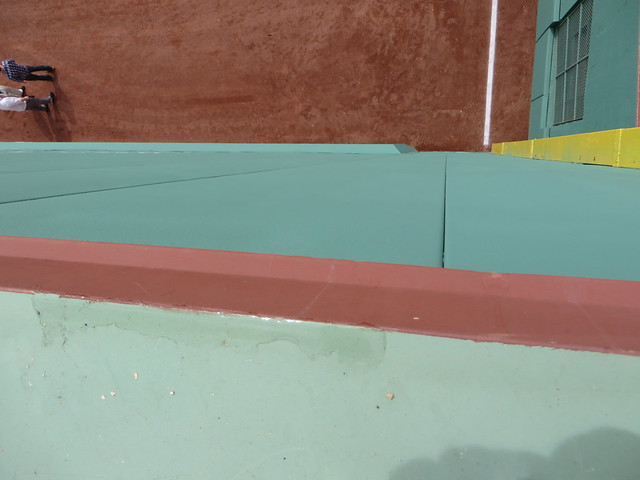 From one vantage point, we could see a solitary red chair amid a field of green ones. 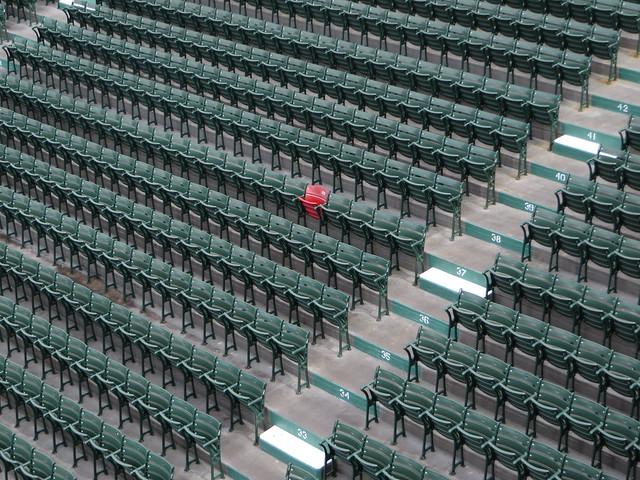 Our guide explained that on June 9, 1946, a man named Joseph Boucher had fallen asleep in this very seat during a double-hitter, and did not realize that the second game had started. During that game, Red Sox left-fielder Ted Williams would hit the longest home run in the park’s history. It flew 502 feet, hitting Boucher in the head and destroying the straw hat he wore. He would later famously complain to the newspaper,

How far away must one sit to be safe at this park?

… and lamented that he didn’t even get the ball.

Here, by the way, is Ted Williams himself in the Red Sox locker room: 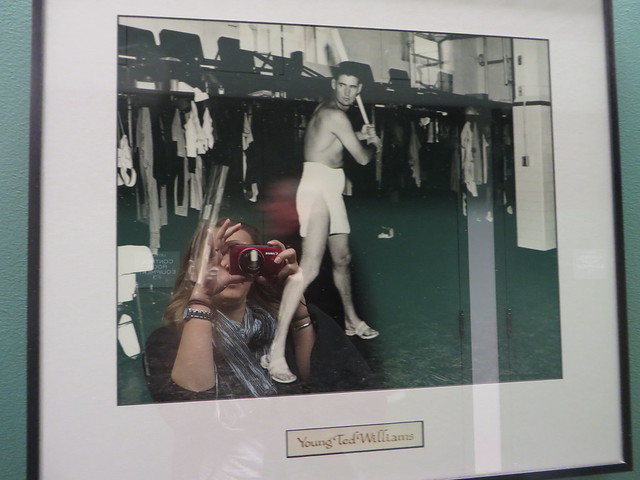 Our tour took us throughout the park, along narrow walkways behind the stands, and even into the pressbox. 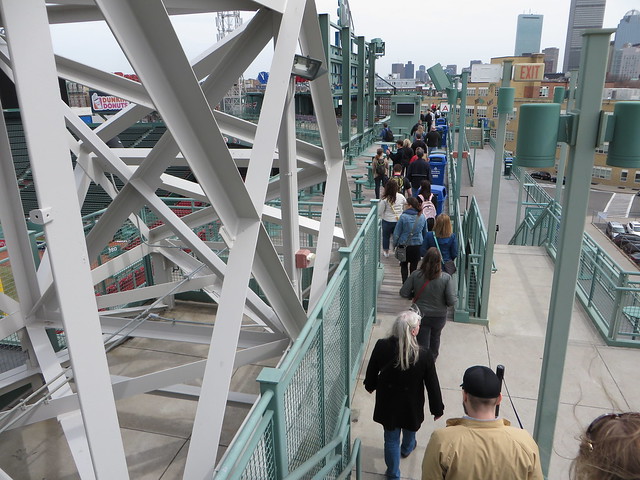 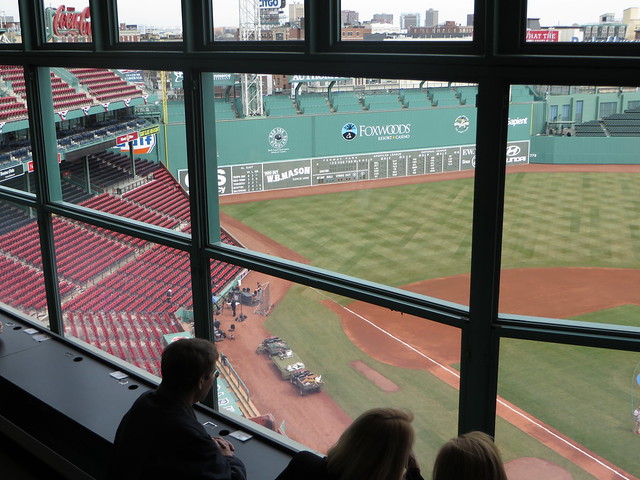 It delved into the history of the team and the park, the Curse of The Bambino, and the 2004 World Series victory that eventually reversed the curse. 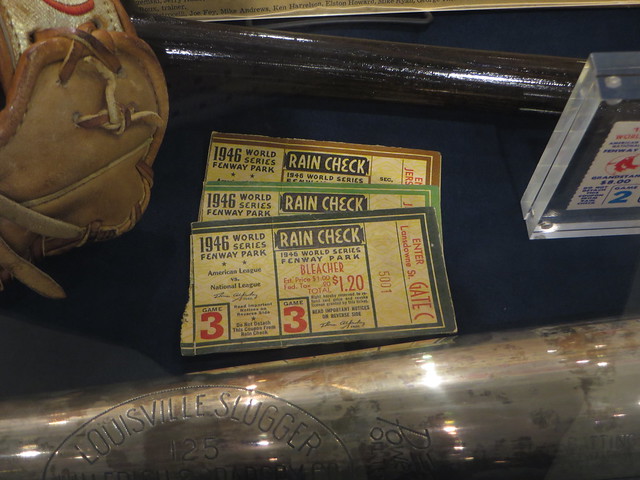 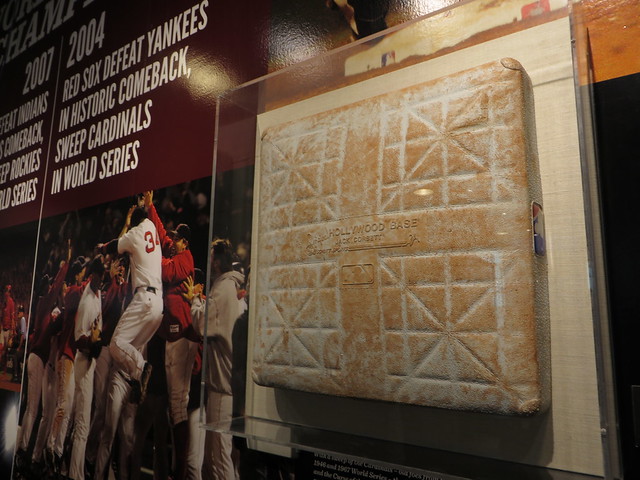 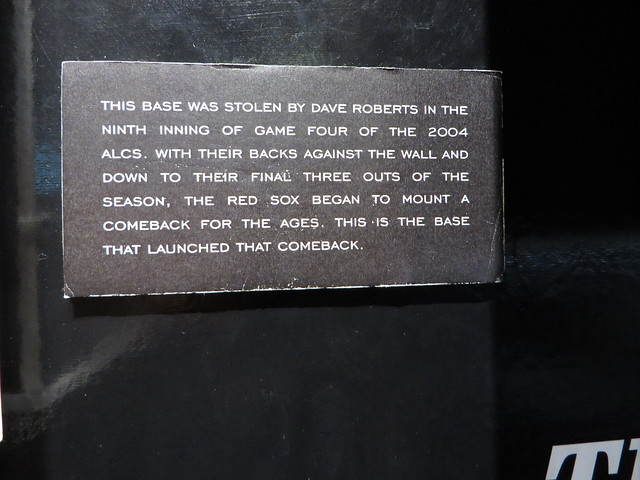 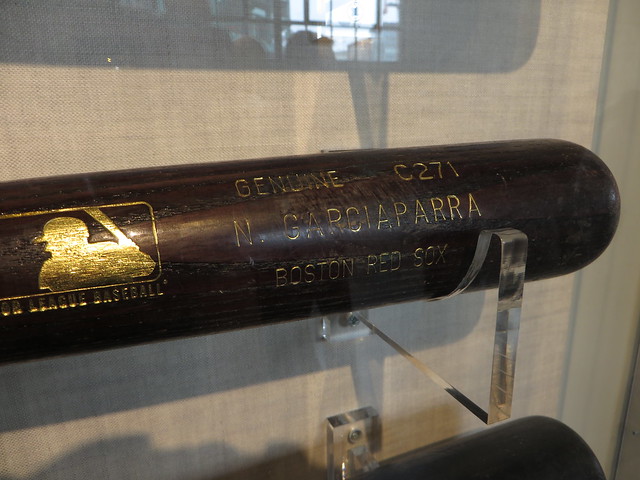 I walked passed this and mumbled, “Noh-mahhhhhhr” under my breath.

It was a fun way to spend an afternoon. It felt quintessentially Boston. But more than all of this, it reminded me of that distant ex. The one that I rarely thought of, the one from so long ago in my past that our story might as well belong to someone else.

I walked through the ballpark, and remembered the time when he and I were a “we”. Back when we were young, and before I learned so many things that seem obvious to me now. Like that a younger boy can break your heart. Or that pajama pants shouldn’t be worn in public.

And that, Red Sox fan or not, you never, ever root for the Yankees.