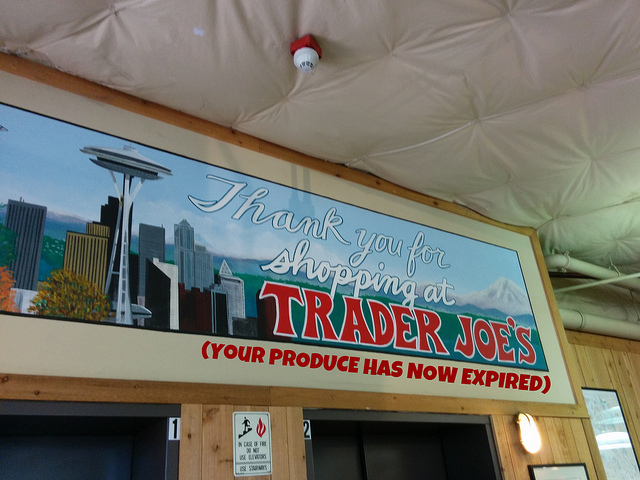 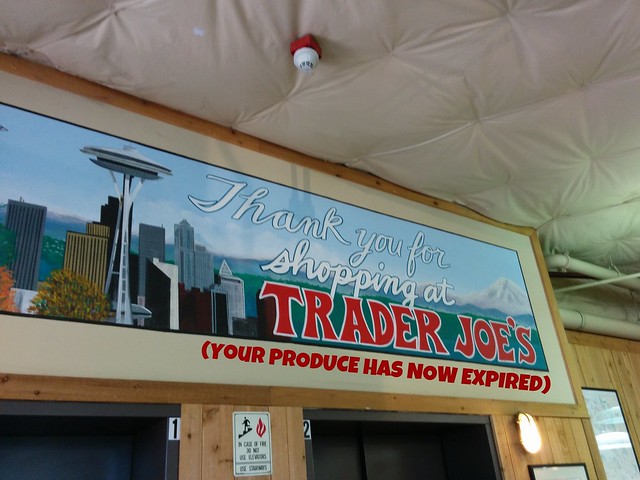 Nearly every week, I engage in the same stupidity.

I refer not to my tendency to watch DVR’d episodes of American Idol for hours on end (long after, I should note, the phone lines for voting have closed, making my behavior particularly inexplicable, even by reality TV standards). I stopped doing that in 2013, after my husband caught me unconsciously contorting my face in weird ways as the contestants sang. (This alarmed both of us.)

The weekly idiocy to which I refer is my ongoing commitment to shopping at Trader Joe’s. There, despite my better judgment, I spend countless dollars on half-composted produce and pantry items that were likely conceived of in a thinktank dedicated to fucking with hipsters.

“If we give it a cute name and cater to a dietary restriction that we’ve convinced them they have, they’ll pay $8 for muffins that taste like wood pulp.”

Photo via. Because sometimes reality is way funnier than the shit I can come up with.

I do this in part because I have the misguided impression that by shopping at Trader Joe’s, I’m supporting an independent neighborhood grocer. The reality is that the chain is owned by one of the wealthiest families in Germany, and their Wikipedia page includes the phrase “horse meat contamination scandal” and reveals that they once fired an employee for being HIV positive. Which sort of changes how I view the company. 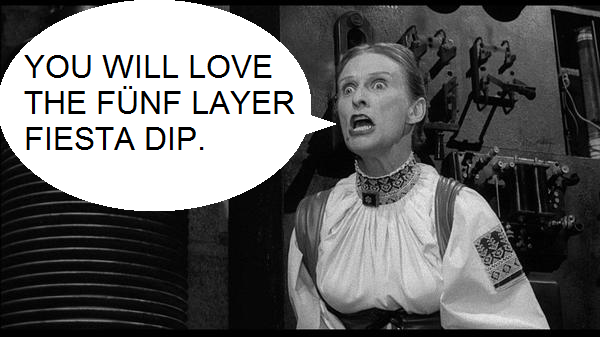 But if you don’t know any of that, I can understand how Trader Joe’s might seem like food heaven, especially if you’ve been stranded on a desert island for years, or if you’re a vegan. Then the aisles filled with overripe produce, amorphous clouds of fruit flies, and tubs of hummus that are inexplicably covered in a patina of more hummus seem like a godsend.

For a few tender years in my twenties, when it was the only grocery store in walking distance, I would skip down the aisles gleefully, while disaffected Trader Joe’s employees carted out bags upon bags of diced butternut squash and wilted lettuce like tattooed, severely depressed Christmas elves.

And now, even though the years have taught me that I’d be better off getting my produce from a gas station, I still shop there. It might be nostalgia. Or frugality. Or Stockholm Syndrome.

Here is a brief list of products that I keep buying, because I am a well-intentioned moron. 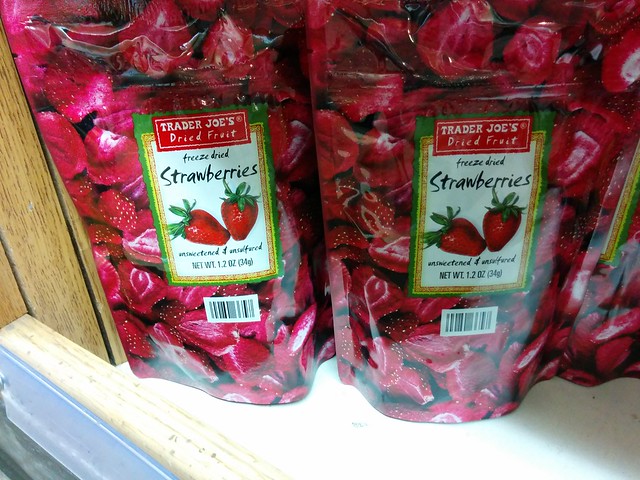 When I first discovered these, I excitedly grabbed a few bags, with the intent of adding them to cheaper variants of cereal and somehow saving money (a sort of flawed fiscal logic which is also to blame for the Great Depression and the rise and fall of Beanie Babies in the 1990s). 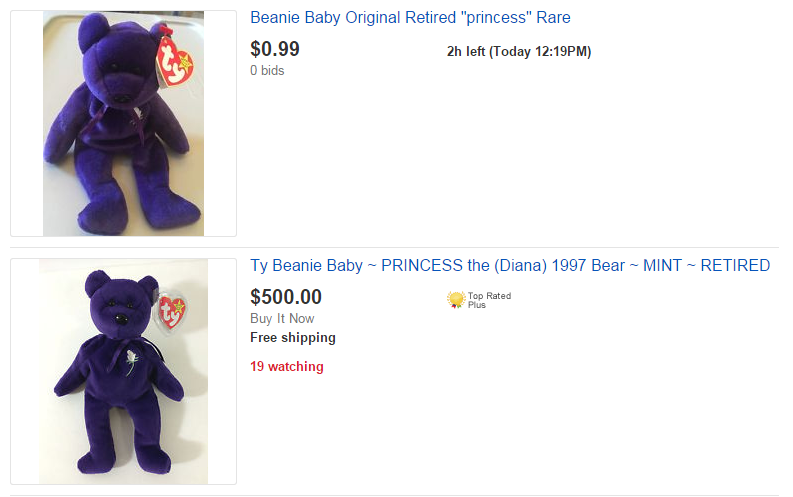 THERE GOES OUR RETIREMENT PLAN.

There are presently four of these bags sitting in my pantry. I keep buying them because I’m convinced it’s basically like printing money, which Rand says I can’t do anymore.

Green Onions That Deserved a Better End Than This 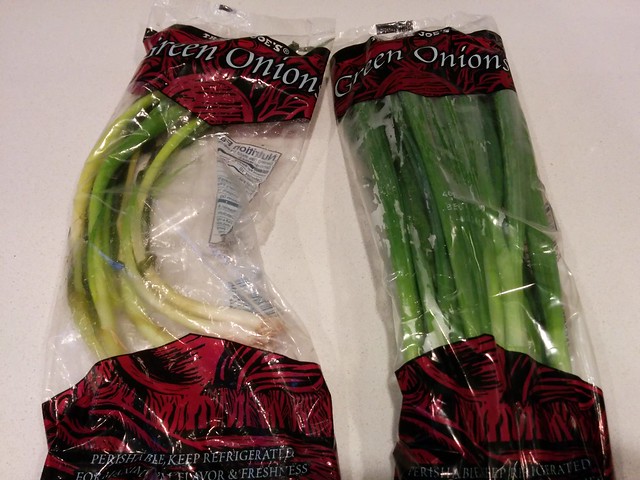 These were in my fridge at the same time because there is something wrong with me.

Green onions aren’t that expensive in the regular grocery store, but I can’t resist an entire bagful for a dollar. If you need some hints of how to use up that many green onions, here’s my favorite recipe:

Huge Plastic Clamshells Full of Basil That I Will Never Finish

At $3.99, these are a total bargain compared to the much smaller containers of basil they sell at the regular grocery store. The problem is that, much like Jonathan Franzen’s The Corrections, there is no way you are ever going to get through it. I have finished a pack of Trader Joe’s basil exactly once, when I got slightly drunk and decided I needed to make enough pesto to fill a bathtub.

I know what you’re thinking – That’s awesome. A bathtub full of anything edible is the American dream. And to that I would yell, “YES, unless it’s pesto, which is never as good as you think it’s going to be, and then you have a bathtub of it and your poo will be green for the next week.”

So I usually just leave the basil in my fridge until it ends up looking like regurgitated kelp. 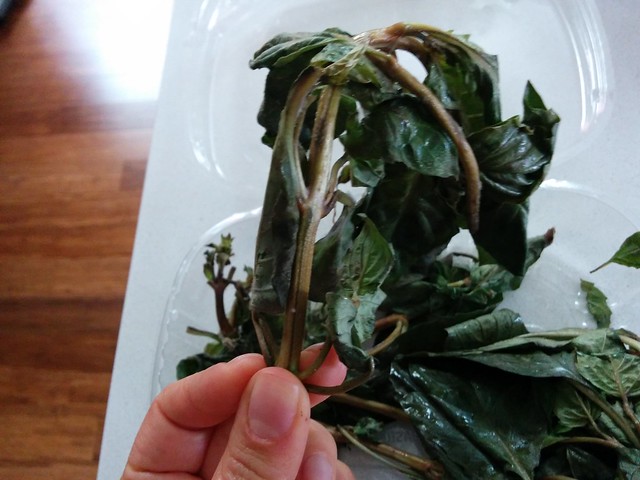 Trader Joe’s should be commended for pioneering a remarkable new variety of garlic that contains no cloves whatsoever. It’s composed entirely of garlic skin, so you save yourself the trouble of peeling or chopping, and can just throw the entire bulb directly into the trash. 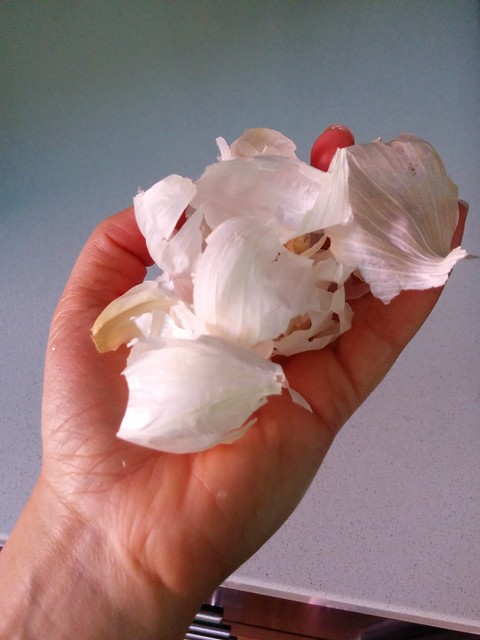 They tend to be slightly more expensive than ones from the regular grocery store, but you are paying for convenience.

Quinoa (or, as my aunt pronounces it, corn-wah-wah) is just like rice, except that it’s a lot harder to cook and tastes a lot worse, because it’s better for you. So whenever I go to the store, I pick up a bag. And then I realize I hate quinoa, and never make it. And then I read some article about quinoa being good for you, and I go back to the store and buy more quinoa which I WILL NEVER EAT BECAUSE IT IS TERRIBLE. 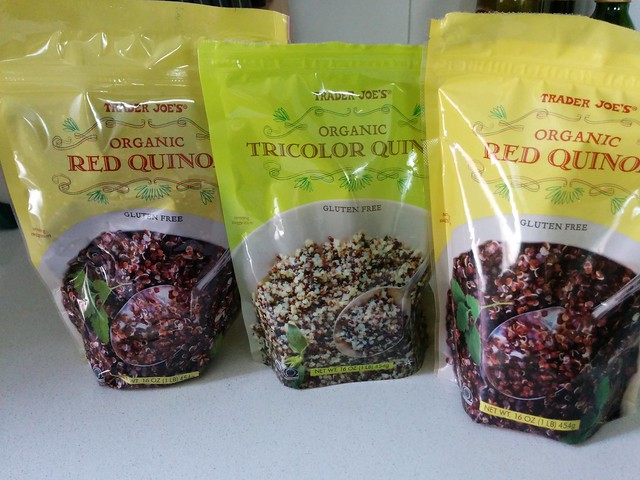 These are actually in my house right now.

Dante was wrong: the seventh circle of hell is ancient grains.

Miscellaneous Baking Ingredients for Dietary Restrictions That I Don’t Have

I grew up in the 80s, before people had dietary restrictions. The only person who had a food allergy was my friend Giselle (you probably have heard of her. She’s that one girl who had a food allergy in the 80s). At birthday parties, Giselle would quietly enjoy a fruit plate while the rest of us rammed cake and Cheetos into our mouths like squirrels in mid-winter.

That sort of widespread bacchanalia ended sometime around 2006, when scientists traced the root of all crime directly back to dairy products. Convinced that a restrictive diet will absolve me of all my sins, I regularly buy things like coconut flour and gluten-free oats, because maybe wheat is the reason why I have acne and yell at the television and forget to pay the credit card bill. 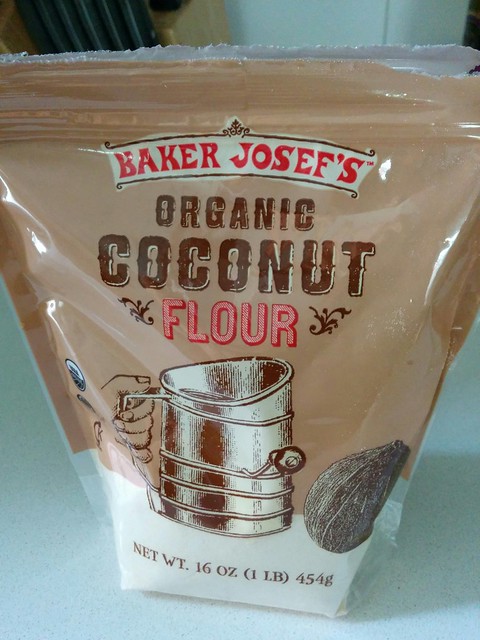 I swear to god, these things look absolutely gorgeous in the store. Then I get them home, and they age faster than that dude from Indiana Jones who drinks from the wrong grail.

I think I keep buying them because watching them wither while I stay relatively young is the closest feeling I will ever have to immortality. 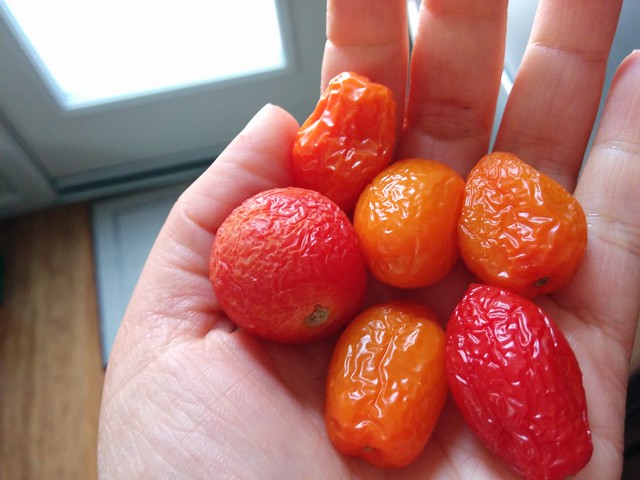 I buy these weekly. 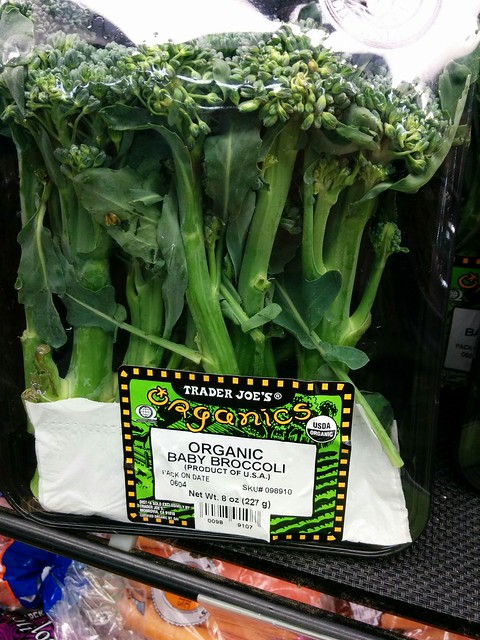 If they aren’t available in your area, you can always head into the backyard and eat a few twigs. 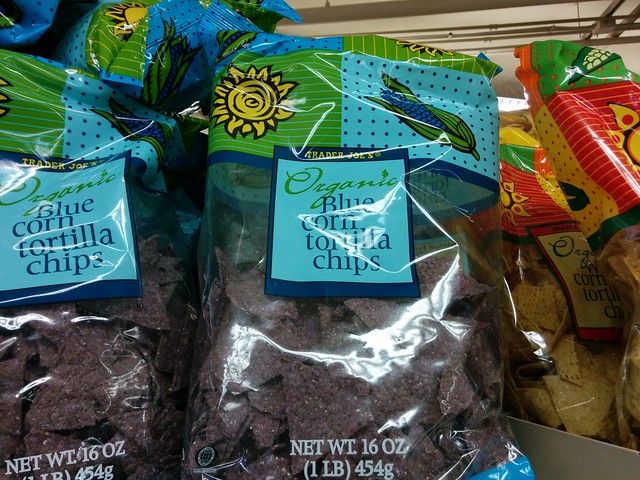 These are amazing. I’ve checked the ingredients, and even though they’re made of mostly just corn and salt, these chips taste exactly like paper. At first I thought I just got a bad batch, but I’ve bought them numerous times (because idiocy) and now I’m pretty convinced that this is what Trader Joe’s wants them to taste like.

I’m sure that a relaunch of this product with a clever new name is forthcoming. 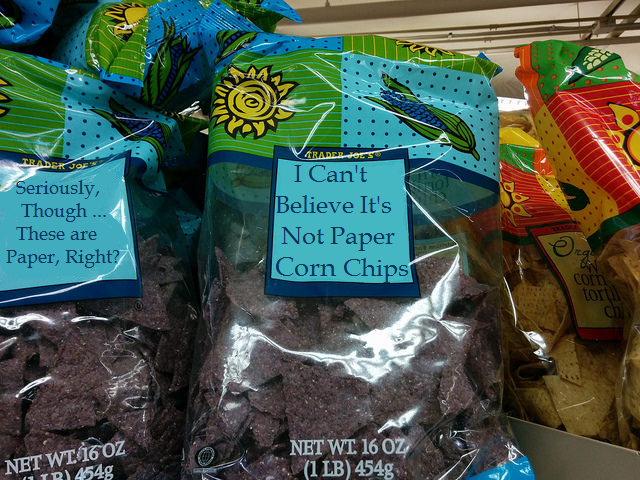 If you buy flowers from a regular grocery store, (or, for those of you who are just pooping out money, a florist), you’ll usually just get, well, flowers. But not if you buy a bouquet from Trader Joe’s. 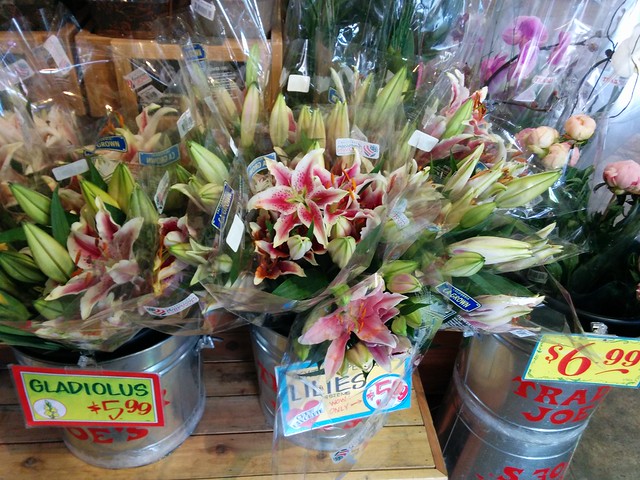 If you take home of any of their flowers, you get – free of charge, I might add – a fruit fly colony starter kit. In just a few days, you can have your very own swarm of nature’s telemarketers (as I like to call them) covering every surface of your kitchen. And if they become too much for you, don’t worry – you can just pack up all your worldly possessions and move (take note: in California and Oregon, your home now legally belongs to the flies).

I do this almost every single week. You’d think I’d learn my lesson. But today, I made my grocery list. And I swear, I didn’t alter it for comedic effect. This is my actual list: 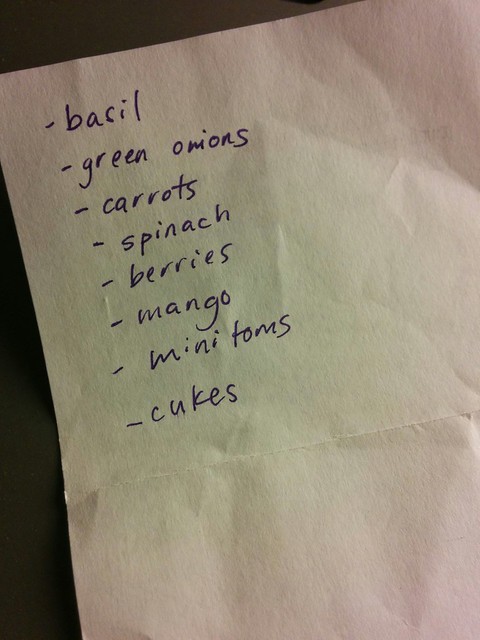 There is something seriously wrong with me.

P.S. – I’m pretty sure the free samples that they give out at my local store are tequila shots. Because I have no other explanation for why every single person in the parking lot is driving like they are shitfaced. Layouts like this do not help: 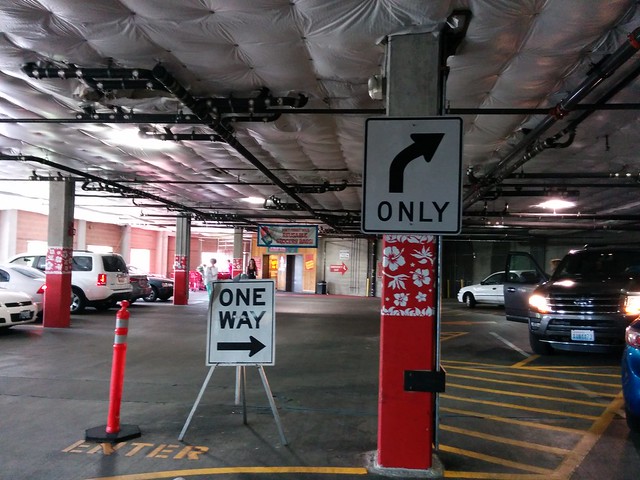 THEY WANT ME TO DRIVE INTO A ROW OF CARS.