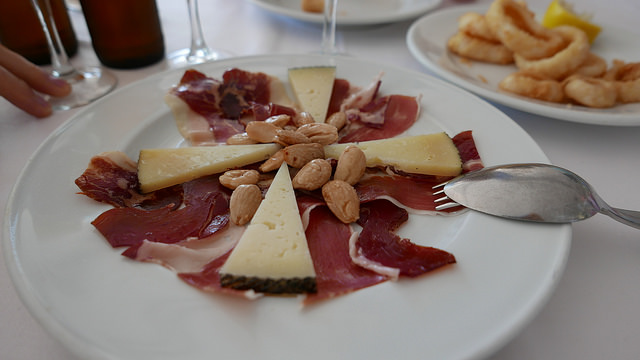 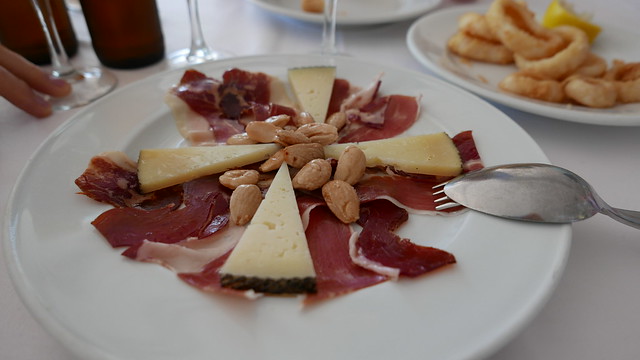 I like you. I truly do. You’re like Italy, but less mafioso-y. I begrudgingly appreciate how entire cities will shut down so that people can take naps. It’s absolute bullshit, and really annoying for tourists, but y’all are like, “FUCK IT! It’s 1pm. Let’s eat paella for 3 hours.” It’s hard not to be impressed with that level of impracticality. I, too, am weirdly committed to rice.

You have a bazillion types of ham, priced according to how much the pig in question seemed to appreciate the works of Cervantes. You came up with the idea of sangria. You gave us Javier Bardem and Antonio Banderas and Julio-Effing-Iglesias.

You also gave us the Spanish Inquisition, but I’m trying to focus on the good.

The point is, Spain, I can totally get behind you on a lot of stuff, and even excuse some of the batshit crazy things you do (like, seriously, chill out with the mayonnaise. There, I said it). But there is one thing that kept coming up, and it’s absolutely bullshit, and normally I wouldn’t give a shit except for Clayton.

Can we talk about Clayton?

Here he is with Rand at the Alhambra: 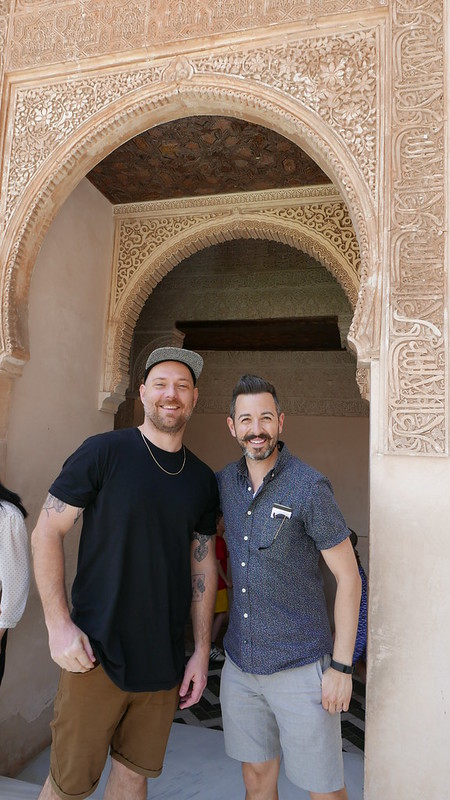 He’s quite adorable. Every time I tried to take a picture of him he kind of froze up and got a case of something I affectionately call “constipation face”, and I understand because I do that, too. Constipation face is a global epidemic that no one wants to talk about. We just scream, “LOOK NATURAL,” which, like screaming “RELAX” results in precisely the opposite reaction of what we are seeking. But look how cute he is when he doesn’t know he’s being photographed: 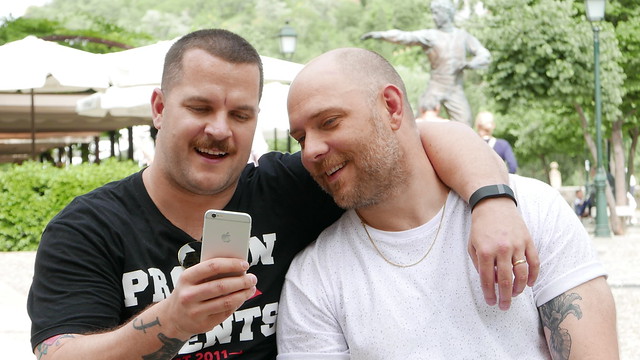 Now, under normal circumstances I would not be worried about this enormous tattooed gay muscle muffin. He can clearly take care of himself and fell entire forests while in the company of Babe, his Giant Blue Ox. But here’s the thing: Clayton is Canadian.

Have you ever been to Canada? It’s the most polite and unobtrusive country in the entire world. It’s like a giant Minnesota. Where apologizing is a national sport. Where people are so well-mannered that you think you might be hallucinating. Where someone once held a door open for me and then said they were sorry afterwards.

And here’s where the problem arose: Clayton is Canadian, and a vegan. Bless his crazy, protein-deprived heart. He realized that in Spain, this essentially equates to starving (even the water has cheese in it), so he downgraded this to just vegetarianism while we were there. He was compromising. He was being flexible.

And, if I’m to be perfectly honest, it’s where we let Clayton down, too. (But mostly, I’m blaming you.)

Because we went to countless restaurants – tapas bars and cafes and places that were well reviewed – and at most, there was one, maybe two items that Clayton could eat. I don’t mean entrees – I mean actual items.

Have you ever seen a 200+ pound man nibble of a crust of bread and some tomato slices while on the verge of collapsing from low blood sugar? It’s really funny but also sad. Like a sedated panda.

In our determination to not let him starve (and rest assured, in every single one of these photos, Clayton is starving), we looked up a few places that were recommended by vegetarians. One night, we even splurged and went to a gorgeous rooftop restaurant, and beforehand let the staff know that we had one vegetarian in our midst. That won’t be a problem, they told us.

When we arrived, I mentioned it again, and the server nodded – it wouldn’t be a problem, he said.

“Ah, then we don’t have anything for him.”

This happened again and again. Because in Spain, “vegetarian” somehow means you eat fish. Now, as my eating habits and physique will clearly attest, I am no expert on vegetables, but I am pretty fucking sure that salmon isn’t one. Plants grow in the ground, by mechanisms that I’m entirely unclear on (something to do with compost?), and fish can be found in the sea and, if you are in Spain, IN EVERY FUCKING DISH ON THE MENU THAT IS LABELED “VEGETARIAN”.

“We can make him some risotto,” the waiter said. That was basically what Clayton ate for nearly two weeks. Risotto. Crust of bread. Wait, no, sorry. Not that bread. That bread is actually made of ham. 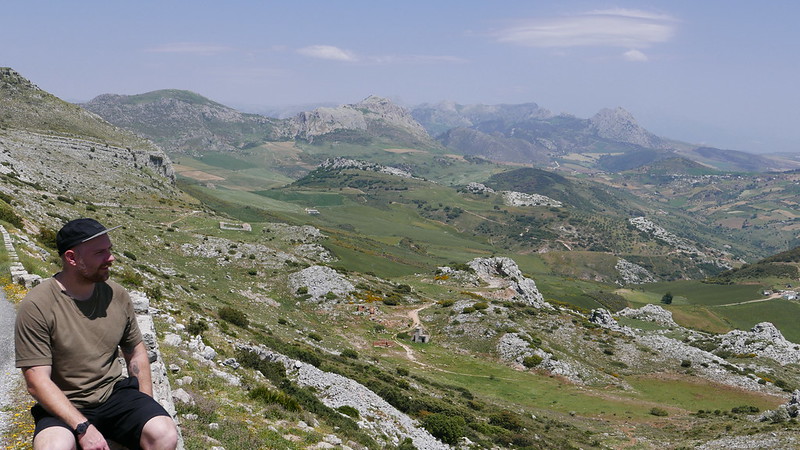 Clayton, staring at rocks, wondering if that’s what we’re going to force him to eat that evening. 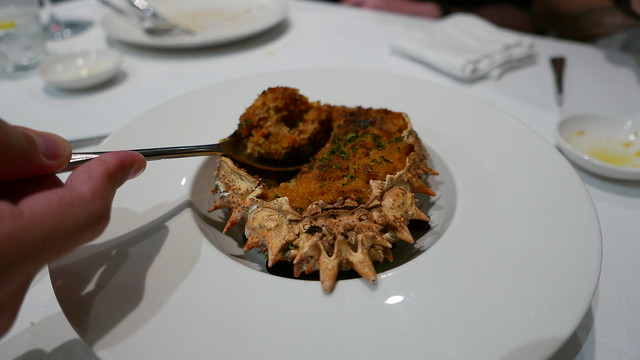 “You don’t eat meat? Okay, cool. Here’s an animal cooked it its own shell. ENJOY!”

The problem was we had no idea that Clayton was miserable half the time, because he’s so fucking polite. See, Rand and I are Americans. If we go to a restaurant and there’s nothing there that’s acceptable, we leave, but not before flipping over a few tables, dousing them with gasoline, and running around in circles with a match while screaming Bruce Springsteen’s “Born to Run.” That is how we gently communicate our displeasure at being inconvenienced.

For fuck’s sake, a major plot point in our country’s fight for independence involves tea. We are not afraid to lose our shit in the name of sustenance.

It wasn’t until Clayton’s husband, Rob (also giant, also tattooed, hunky, polite and Canadian because God is real) let us know that Clayton was having a hard time. Three courses in at dinner one night, he gently informed us. And we realized that most of the time, they were just too polite to make their unhappiness known in a way that we Americans could understand. By the time we caught on, it was too late. 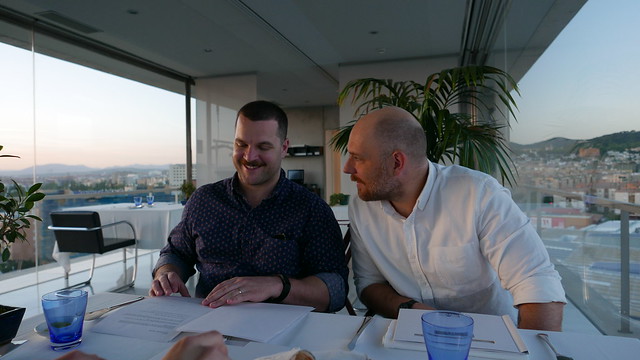 A happy moment before we talked to the waiter and realized that one of us was going to starve. 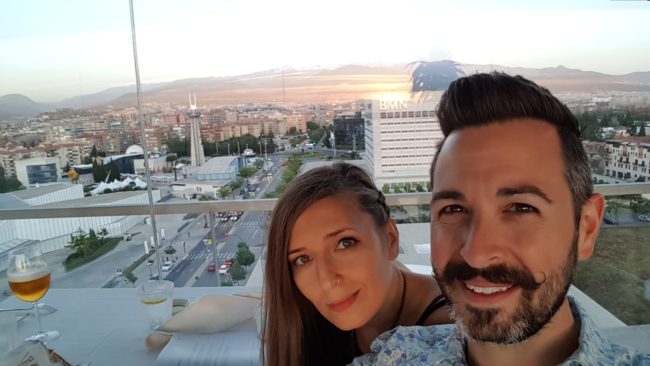 Later, Clayton would say that he wanted other people to realize that vegetarianism is a viable option. Even if it was just once a month, or once a week. He needed to show them how happy he was – and he couldn’t do that by feeling or being miserable because there wasn’t anything for him to eat. He’s so committed to his cause, he didn’t even complain.

I’m so sorry, Clayton. You deserved better. You deserve sweeping smorgasbords of lentils and falafel and whatever the hell tempeh is. You deserve cookies made with flaxseed eggs and coconut oil. And while I’ve uttered those exact sentences as a threat to people in the past, I say them to you with utmost affection. I hope you never go hungry again.

So I realize that we were part of the problem, Spain, but you also somehow think that turbot is a plant, so a lot of this is on you, too. You need to understand that there are people out there who are, well, good. Really good. They care about animals and the planet and about other humans. And when they have decided to live their life with a commitment to that, you cannot say, “Great, here’s a fish. Its name was Javier and it probably had feelings and a family. ENJOY.”

We need to make those people are happy, because they are really good people. We need to make sure they’ve gotten enough ethically-sourced food to eat. Especially if they are 6-feet tall and mostly made of slow-twitch muscle fibers. 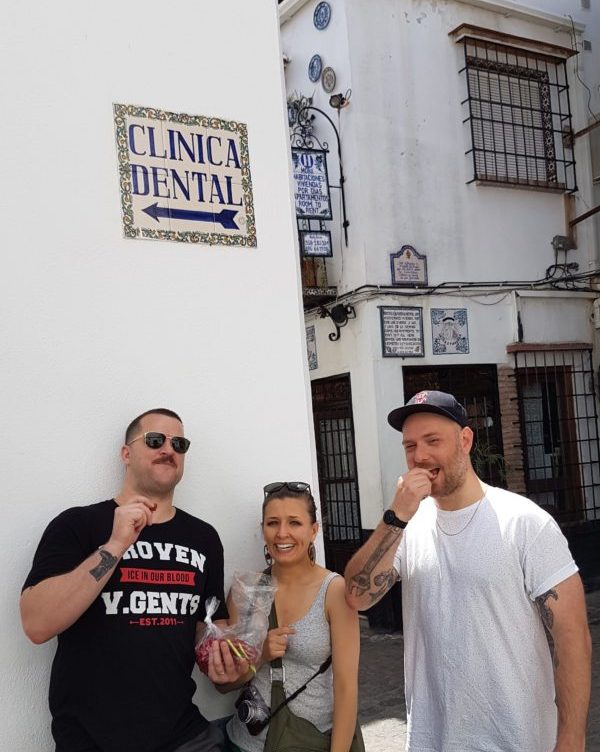 Eating candy underneath a dental clinic sign. As one does.

In anticipation of seeing Clayton again, I’m reading up on how to make lavender and cardamom cupcakes without animal products. You can step up, too, Spain. We did our research, and you let us down. You need to understand that if something can wiggle around and swim away from you and has eyes that IT IS NOT A VEGETABLE. If you don’t want to cater to vegetarians, then say that. Stop pretending that you have options for them because there’s sardines on the menu.

Maybe – and I really can’t believe I’m saying this – MAYBE STOP PUTTING FUCKING HAM IN EVERYTHING.

I don’t mean my order – I love ham.  But you know, consider having some options for the good people out there. For people like Clayton.