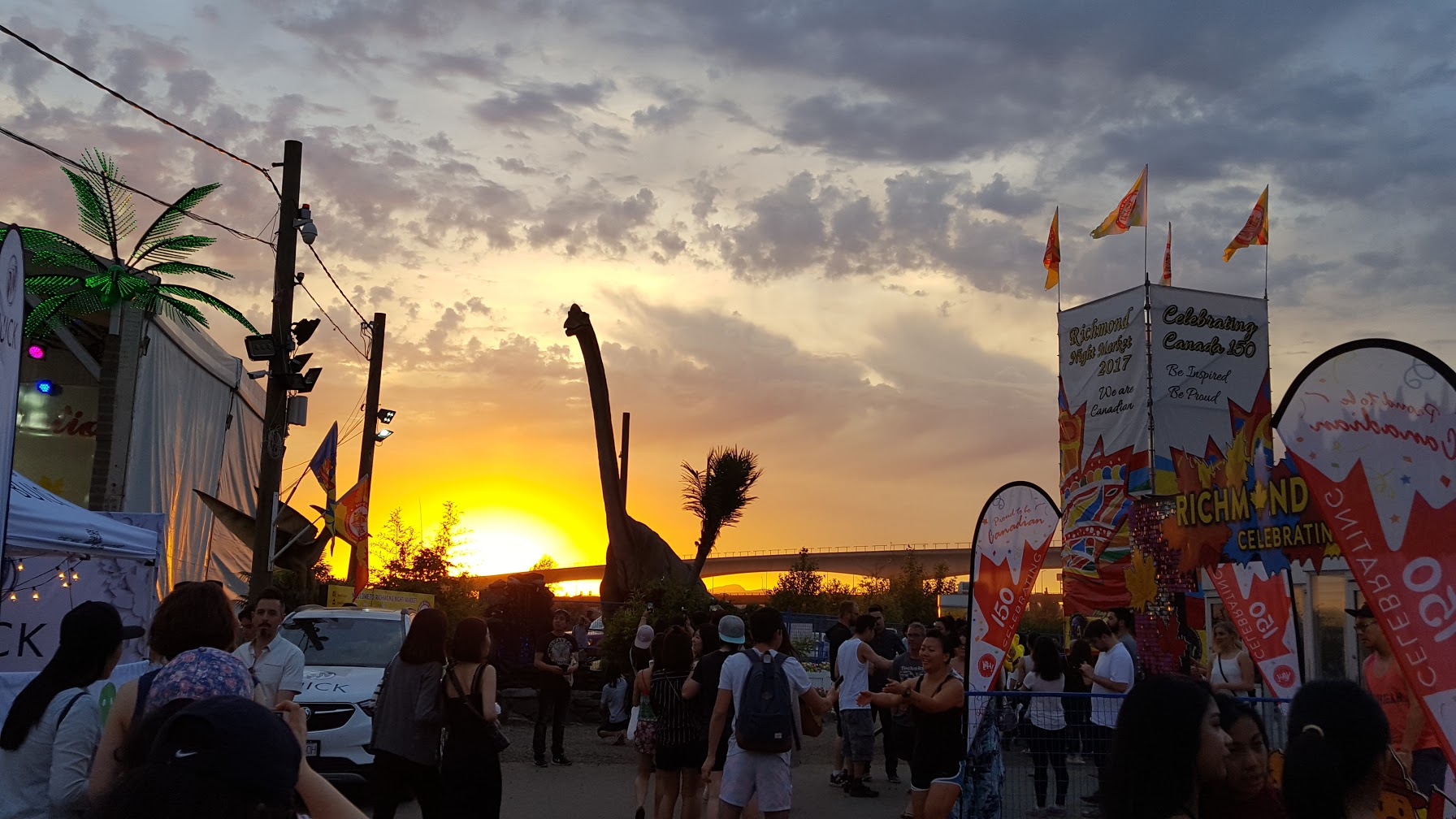 Whenever people recognize me in real life (which isn’t terribly often – the one who is almost always spotted is Rand, and from there they are able to conclude that the loyal hobbit by his side is me), they often stare blankly before asking, “Why are you here?”

I find this charming. It’s fun to be interrogated at farmer’s markets with the same pointed questions you’d get if they opened their pantry and found out you were living in it.

You are a travel writer. You go to fancy places. And right now you are not in a fancy place.

“Listen, dear one” I say, as I stand in a dirt lot surrounded by animatronic dinosaurs. “You do not understand how miraculous this place is because you have seen it too many times. But I assure you, it is.”

If you spend too much time somewhere, it grows stale. I suppose that’s the advantage I get of being on the road so often. I’m able to see things with news eyes and so all of it remains delightful. Everything is new.

Everything at the Richmond Night Market certainly is.

Last weekend was our second jaunt to this technicolor carnival, which sits dormant on the outskirts of Vancouver, B.C., for most of the year. It is only from May to October, on Fridays through Sundays that it is open, and as the name would suggest, only in the evening. And even on our second outing, I noticed that it was slightly less shimmery than on our first visit. Newness is magic. But Wil and Nora had never seen it, and they stood, wide-eyed, while we calmly explained to them that everything we were going to eat had to be either deep-fried or on a stick (no bonus points would be awarded for deep-friend and on a stick, because that was just best practice).

Also, the above image of my husband reminded me of George Peppard on the A-Team so I spent 20 minutes creating this DON’T YOU JUDGE HOW I SPEND MY TIME:

It’s hard to know where to begin, so I recommend doing a reconnaissance pass around the market and carefully evaluating your options and JUST KIDDING – GO DIRECTLY TO THE ROTATO STALL BECAUSE YOU ABSOLUTELY WANT A ROTATO. It is what happens when you combine a potato with rotation.

The rotato recently entered the zeitgeist after it appeared on Food Republic’s absolutely bullshit list of french fries, ranked (it appears under the name the Potato Tornado, which I find offensive, and yet that is the keyword that I am using to optimize this post). It is a spiral cut potato, created in a sort of alchemy that requires a drill, which was rather surprising, as I thought incorporating power tools with junk food was exclusively the domain of Americans.

The rotato comes with your choice of powdered toppings, everything from a brilliant orange cheese to ketchup. The future is now, friends: we have powdered ketchup, so I assume that colonies on Mars are forthcoming.

While I love her dearly, if you ask me to define hell, it is being surrounded by skinny women eating fried food.

In truth, it was hardly dissimilar to a regular french fry, except for the dusting of msg-laden powder, the effects of which are somewhat psychotropic and addictive. I loved the rotato, I hated the rotato. I cannot stop thinking about the rotato. I can’t believe how many times I’ve typed the word “rotato.”

At some point, Nora apparently insulted Rand’s honor so they had to have a duel. Rand had chosen a mini-rotato, and so he embarked on the endeavor poorly armed.

Honestly, these two couldn’t even hold it together for the fraction of a second required to take a photo.

This is making my chest turn straight into a series of heart emojis.

OH MY GOD I LOVE THESE NERDS.

I absolutely adore the look of disdain this woman is giving them.

Girlfriend has mastered the “WTF are they doing” face.

My man in the coral polo shirt gets it, though.

He burst out laughing at them approximately .4 seconds later.

And there was takoyaki, which I can write an entire post about (and may, soon). We had them in Japan – little fried balls of dough with pieces of octopus inside, dressed with sauces and topped with bonito flakes. Oh, and also, I cut my hair (let’s focus on that and not on the fact that my backpack is pulling down my dress and you can see half my bra).

It is hard to tie the market to one specific country. Most of the stands are heavily influenced by flavors we encountered in Asia – we saw many of the same foods we encountered while walking through Osaka or Kyoto. But there are elements of Chinese, Korean, Vietnamese, and French cuisines (the latter two often paired together, the long legacy of colonization available in gastronomical form).

There are many, many vendors, and supposedly the amount of food that a human can eat in a specific period of time is finite. But I feel like that fact is for quitters.

Wil has this tendency to not eat for an entire day (note: if I did this, there would be casualties) and then when he does, he puts away an entire cow. I find this strangely endearing. Also endearing? You absolutely cannot tell how he feels about something from his facial expression. Wil’s “this is delicious” face is identical to his “this is absolute” crap face.

He stared at his treat with a look that screamed, “Why do I have to deal with this shit?”

Or maybe that was because of something else.

(Also, this is apparently Wil’s “Holy shit this is delicious” face. Who knew?)

We did not go on these because we are not 11 and therefore we are well aware of the consequences of our actions.

And fair games where you can win anatomically correct stuffed toys! Wait, wat.

Note: I did not see a single person in the entire market walking around with a prize, but I’m sure the odds aren’t deeply, profoundly stacked against you or anything.

THE CANADIANS HAVE DINOSAURS. AND SOCIALIZED HEALTHCARE. AND TRUDEAU. THEY HAVE EVERYTHING.

We stopped by the churro stand before leaving, because at that point we’d thrown caution and humankind’s millennia-long practice of eating vegetables to the wind.

Perhaps a place becomes less luminous after a while. Perhaps if you see it too many times, it loses its sparkle. But then counterexamples so readily present themselves. I have seen this face nearly every day for almost 16 years now. And when he swears he didn’t bite this churro in two, and is OBVIOUSLY lying through his teeth, his eyes reflect the colors of the setting sun, and I decide to keep him around a little longer.

It’s hard to tell what makes an experience wonderful. It might be the newness of it.

But I’m inclined to think that the company you keep plays a part, too.

If you head to the Richmond Night Market: