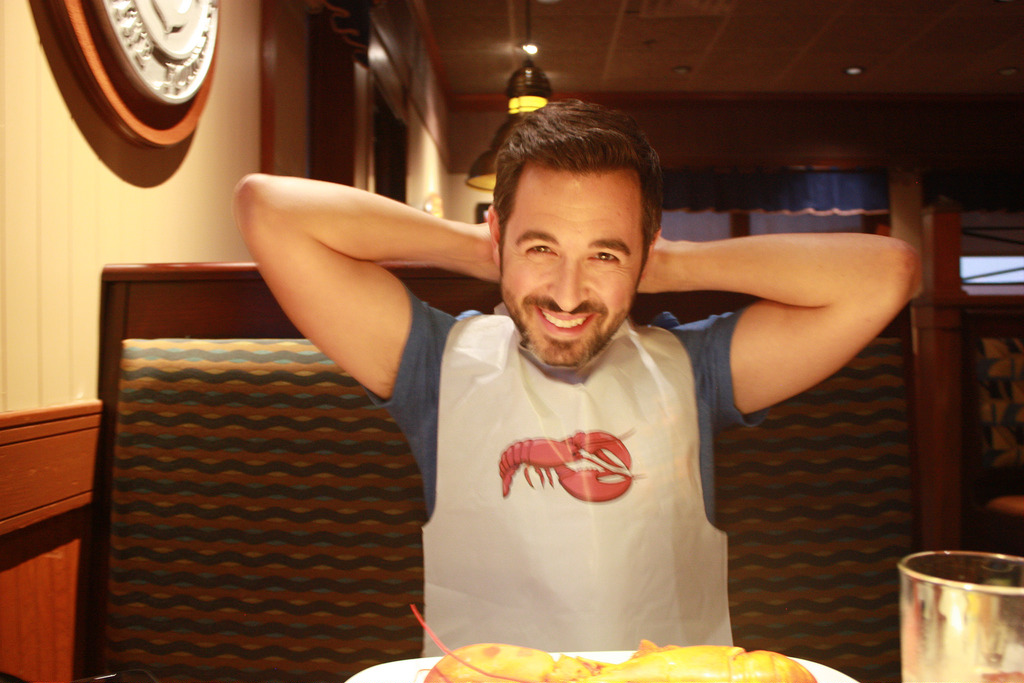 My husband and I are driving through southern Oregon, like we have every summer since we were married. I see a Red Lobster.

I tell him to pull over immediately. He ignores me. After more than a decade together he can distinguish between my “something is urgently wrong” scream and my “I need a cheesy garlic biscuit” scream (he is able to read nuance).

I tell him that one day I will demand he take me there for my birthday, and he will be unable to deny me. He says nothing. The restaurant’s sign grow smaller in the side mirror.

My husband refuses to eat at restaurants with more than two locations. He does not understand the love that is ingrained in me. It predates him. We have to travel back to find its origins, to a time when everyone has terrible hair and most clothing is layered over a turtleneck. Welcome, dear friends, to the 1980s.

I am 4. Or 5. Or 6. My age correlates perfectly with the number of years my mother has been in America. She and her parents are Italian. In my earliest memories, she and my grandmother spend hours in the kitchen. They roll out pasta by hand. My mother stuffs cannelloni and makes bechamel. My grandmother makes giant pizzas covered in anchovies and the oil pools on top of the cheese. It is Seattle a decade before the internet. There is no such thing as fresh mozzarella in this new world. I am round-cheeked and sustained almost exclusively by carbohydrates.

By the time I am in the third grade, we have moved to Florida, a state which is almost completely surrounded by water. Maybe my mother thought a peninsula would be more like Italy. It is not. Florida feels like a primordial creature that has just endeavored to step out of the sea, and may go slinking into it again if you do not pay attention. The humidity makes everything wet. We do not have air conditioning. I am strange for having divorced parents. I am strange for speaking another language with my family. I am strange.

It is too hot to spend a lot of time in the kitchen. My nonna is growing older. My single mother is tired. They do not make fresh pasta anymore. The tradition is gone before I have time to realize what I’ve lost.

Every year or two, my uncle visits from Italy with his family. I do not realize that we are lonely until after they arrive and it dissipates. My grandparents smile. My mother laughs. My family does not feel small and isolated. Look, there are more of us now. We lovingly scream at one another in the same language. We are not an island. We are attached to something bigger. We are a peninsula. We are better than Florida.

(We still do not have air conditioning.)

My cousin and I collect tiny mollusks from the beach, pearly blue in color and barely the size of my fingernail. My aunt carries them home in my useless bikini top (the first time in its existence that it has actually carried anything of substance), and later will serve us a pasta studded with tiny clams. She will insist they are the same bivalves we collected. I am skeptical, but eat it anyway. (Twenty years later, she will admit to the deception: the clams were canned, and ours were discarded.)

After weeks of effort, my cousin and brother and I succeed in systematically breaking down our parents’ defenses. There are three of us and our whining is a magnificent chorus that spans two languages. Enough with your pasta. Enough with your recipes. Enough with my nonna’s hands, covered in salt to remedy the burns she sustained while cooking because her eyesight is failing. Take us out to eat.

Our choices are limited. We are in central Florida near the end of the twentieth century. Our upscale dining options are Red Lobster and Olive Garden.

We end up at Red Lobster because we are not going to Olive Garden. Contrary to what their extensive marketing campaign claimed, no Italian wants to go to Olive Garden. Our only option soon becomes an annual tradition. Some summers, we go twice.

The minute we step through the door, I feel an opulence I thought was inaccessible to me. This is the height of middle-class American casual fine dining. There is air conditioning. There are tablecloths. There is the sound of clinking silverware in the distance and a tank of lobsters by the door.

I marvel at these creatures, marked for death. I press my hand against the cool glass of their prison. I should be sad, but I keep thinking that their end will be noble. Besides, I am absolved of guilt for the demise of these particular crustaceous souls: no one at our table will order lobster. Even our extravagance has its limits.

Every meal comes with a salad, and we all opt to make ours Caesar. It is covered in cheese and croutons and I think how fancy Caesar must have been and how he is Italian, like us. I honor my heritage with bites of once-crisp lettuce now limp with dressing. When I later learn that Caesar salad was invented in Tijuana, I will refuse to believe it.

I almost always order the same thing: shrimp scampi and a baked potato with “the works.” I order my potato this way because it sounds elegant, and it costs the same as a potato with merely butter. I am getting the most for my dollar. I am savvy about money. When I am grown, I will be rich and eat here every week.

The visiting Italians marvel at the potato. They have never seen anything like it. I want them to fall in love with America. I want them to move here so I feel less alone and so that my grandparents are happy all the time, but they never will.

The shrimp swim in a tiny ramekin of butter and garlic. Scampi is an Italian word, I think proudly. The servers do not treat us like pariahs. We are regal. We are European. The Romans conquered the world, and now we have conquered Cheddar Bay.

The biscuits come in baskets, inexplicably mixed with spherical hush puppies that are doused in powdered sugar. The savory mixes with the sweet but we continue to eat basket after basket. My mother tucks a few in her napkin and smuggles them out of the restaurant in her purse. Two biscuits to later be shared among three children. It will be a bloodbath.

We do not order dessert. We do not order soda. I do not mind. I do not feel deprived. Those are for people who like to waste their money. We are too clever for that. Besides, there is an abundance before me. Behold the bounty of the sea, dredged up from the depths of the oceans, battered, and deep-fried. We have both tartar and cocktail sauce. We can have everything. For ninety minutes, we even have air conditioning.

I am so full that I have to unbutton my pants.

Six months later, I meet my husband. He is refined. He has straight white teeth and clean fingernails and impeccable taste. He takes me out to an Italian restaurant for our first date. The napkins are made of cloth and there are candles on the table. When he rests his forearms on the table instead of his elbows, I realize I am out of my depth. The owner stops by our table and I chat with him in my mother’s native language. This is calculated. I want to impress my date. It works.

Many years later, walking through Milan on a chilly night, I will ask him if he thinks it is neat that I speak Italian.

He cooks countless dinners for me, and on nights when I am finicky, he cooks two.

I accuse him of not loving me because he will spend hours in the kitchen preparing me a meal but will not take me to eat unlimited Cheddar Bay biscuits. This is the same argument I made to my mother more than twenty years ago.

We are driving through southern Oregon again. It is three days after my 33rd birthday. I do not know where my husband is taking me. I cannot see the now obvious conclusion of the story. I am in a state of disbelief when he pulls into the parking lot and opens the door. At dinner, he puts on a bib and beams at me over a brilliant red-orange lobster, and all I can see is his smile.

Note: I’ve written about this before on the blog, but I reworked it into this piece and never found a home for it.