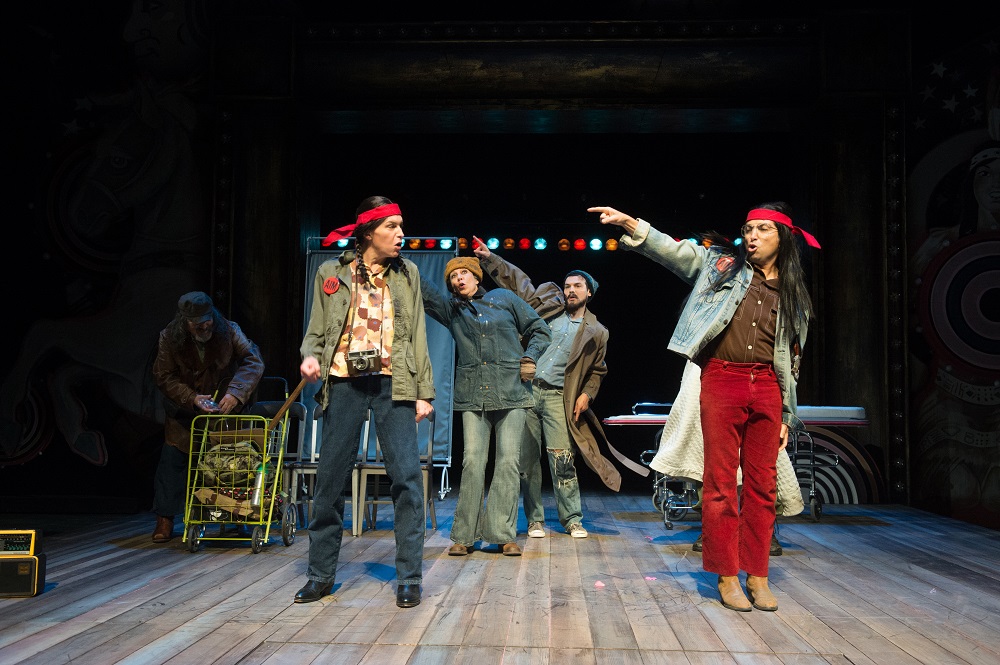 Minutes before the curtain rose on the night we saw Between Two Knees, my husband Rand received a text from our friend Shaun, who is in the show.

“Sorry in advance,” Shaun wrote, with a crying-laughing emoji. Rand showed it to me.

“What do you think that means?” he said. I shrugged. Minutes later, the show began, and Shaun – who is of Blackfoot descent – gallivanted across the stage in whiteface and a blonde wig, a terrifying sort of grin on his face. 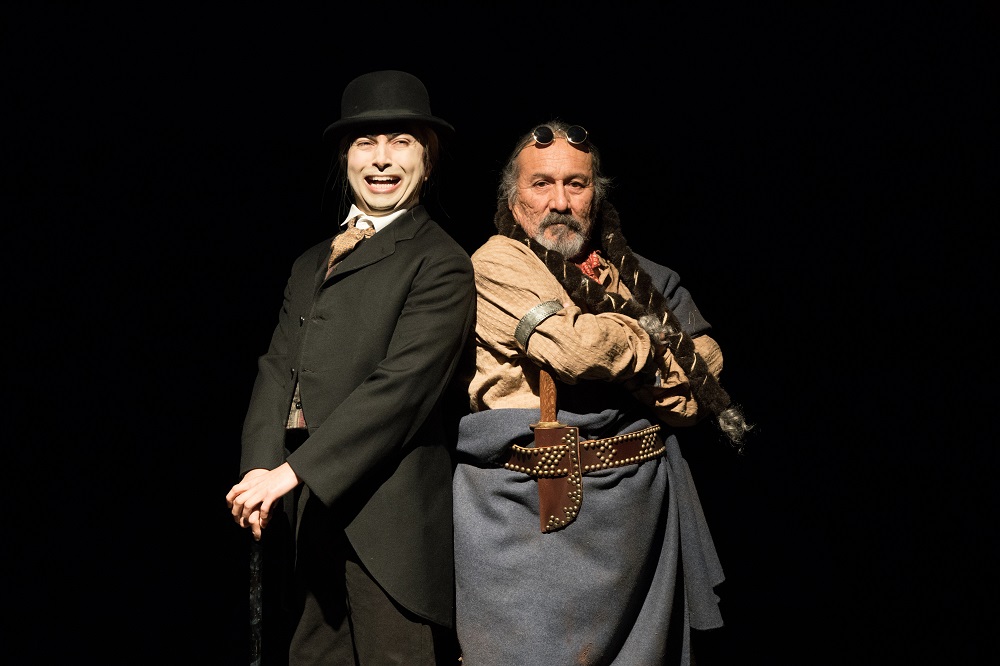 His character had been circumcised in order to pass for white – which entailed a half dozen foreskin jokes, and opening up his pants to reveal a blinding white light emanating from his crotch (illuminating the faces of his costars as well as the meaning of his earlier text). My husband – whose ancestry is very, very Jewish (you can follow that thread on your own, can’t you?) – doubled over with laughter.

For the last month and a half, Rand has been nudging me to write a review for Between Two Knees, the new play written by Native American sketch comedy troupe the 1491s and commissioned by the Oregon Shakespeare Festival. Ostensibly, it should be an easy task. I enjoyed the show. The cast is talented and charismatic. The leads have wonderful chemistry. Plus my friend Shaun is in it, and he’s just delightful and so darn cute.

And so I have to be clear: my hesitation to write about Between Two Knees has nothing to do with my impression of the show – in that, I can be straightforward: it’s really, really good. Funny, sad, relevant, profoundly uncomfortable, ridiculous, sweet. But I’ve been avoiding a write-up because it’s also incredibly hard to parse. It’s an absurdist comedy about Native American genocide. Wait, what? How is that even possible? Like I said, it’s hard to parse. And as a white woman, I’m not exactly sure if I should.

But this play might be precisely the answer to the questions it poses. As Dallas Goldtooth, one of the show’s playwrights and a member of the 1491s noted in an interview with Oregon’s local NPR affiliate, “I think comedy is the most effective way to deal with issues of trauma and darkness, when it’s needed.  We need to laugh sometimes, and we need to allow ourselves the freedom to laugh, and I think that’s … I hope this play, Between Two Knees helps us accomplish that.” 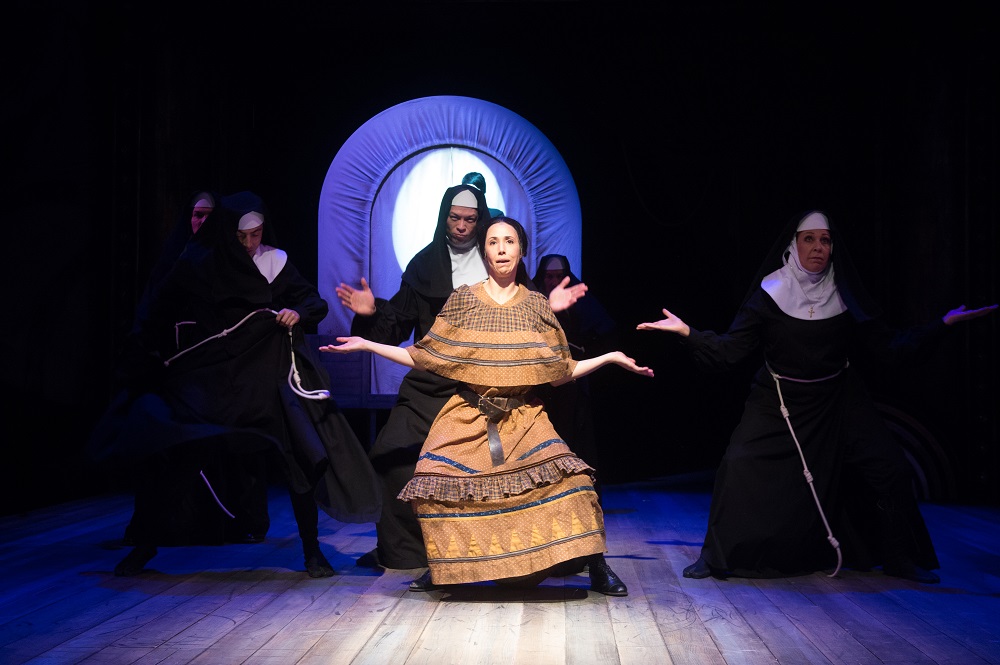 History is written by the so-called winners, which is to say, it’s written by mostly white people. Between Two Knees shows us what happens when that’s not the case – when there’s no white savior, no patronizing cliches, no easy answers. And the bad guys look like, well, most of the audience. It’s a harsh reality – albeit a riotously funny one – that some people aren’t ready to see. Instead, they leave at intermission (which has been a problem at Two Knees). Or register lengthy complaints with the Oregon Shakespeare Festival administrative offices. Or post one-star reviews for the show.

Perhaps that’s the biggest problem with Between Two Knees – the people who could benefit the most from seeing it are the ones who are walking out. But fault for that doesn’t lie with the show or its playwrights. It lies in people being unable to confront their own privilege and our collective ugly past.

Knees follows the tale of Irma Jean and Isaiah Snake (played by Shyla Lefner and Derek Garza), two young Native Americans who escape an abusive Catholic orphanage and travel across the country freeing their brethren. It’s a fairy tale, of course – the triumph of Irma and Isaiah’s escape shines so brightly because it contrasts so starkly with the reality of their contemporaries, who were similarly stolen from their families, abused and beaten, and stripped of their identities. 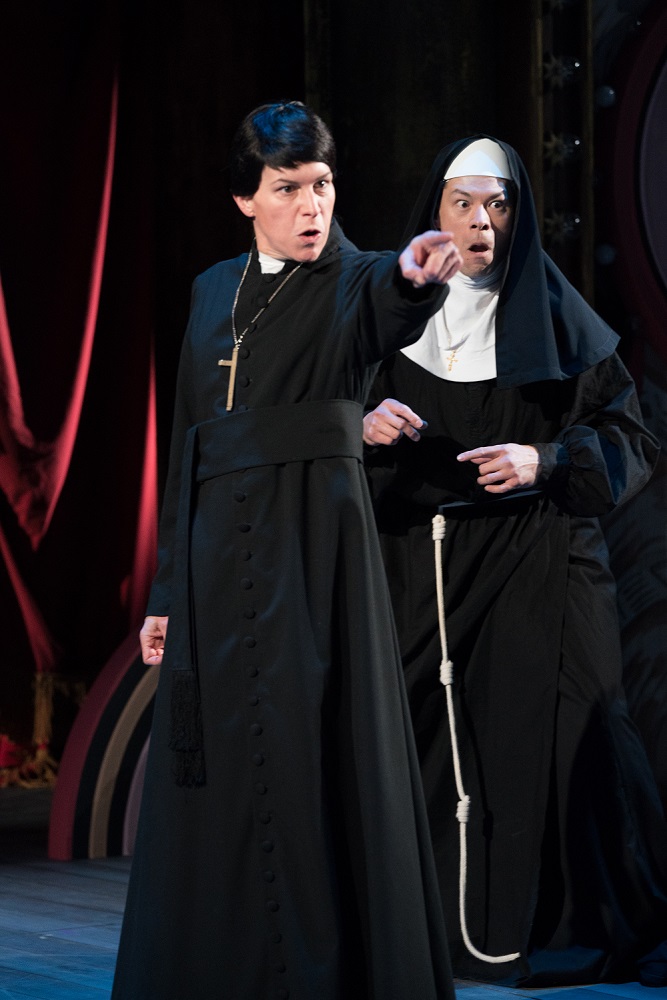 Irma and Isaiah’s stories are tied two events at Wounded Knee: the massacre of the late 1890s (that left 300 Native Americans – mostly women and children – dead), and the 1973 standoff (when members of the American Indian Movement and the Lakota Nation occupied the town to protest systemic mistreatment and corruption at the hands of the federal government as well as tribal president Richard Wilson). Plotwise, their ties to those events feel at times tenuous, but it doesn’t matter: it’s simply delightful to watch them. They take on numerous roles, they have a Mortal Kombat style battle against a hoard of abusive nuns and a sadistic priest (which goes on a little too long). They tussle and dance with an exceptional ensemble cast, including Rachel Crowl, who is a damn chameleon as she switches between personas.

And when the tone of the play turns on the dime, moving from riotous comedy to utter grief so quickly you’ll get whiplash, they do as well. I watched tears streaming down Garza’s face as he holds a weeping Lefner, and realized: that’s how loss often hits you. Out of nowhere. 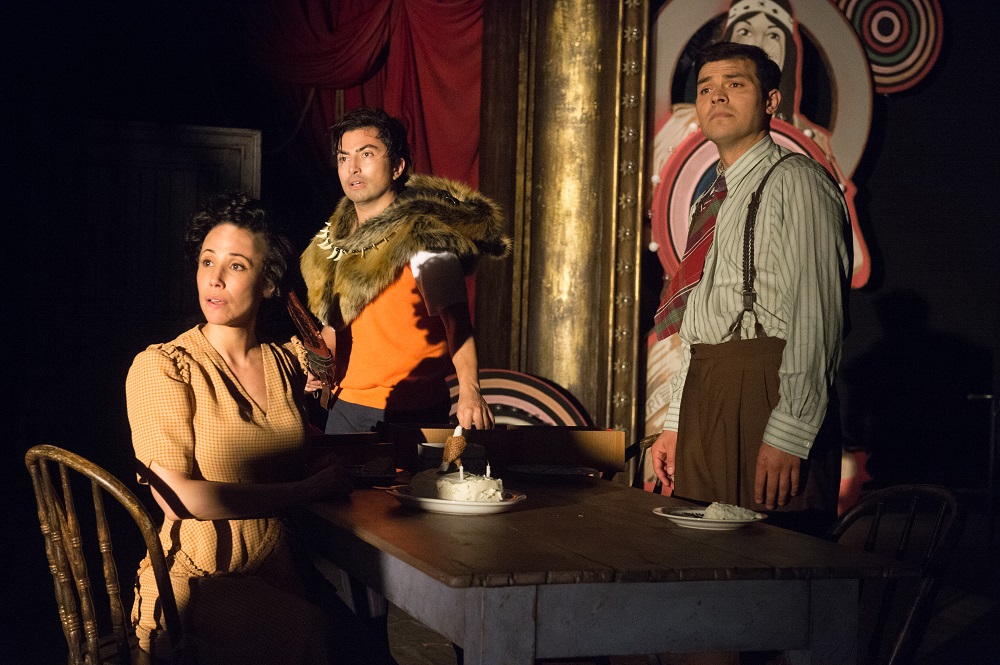 And as they move from a young couple to an older one – played by Wotko Long and Sheila Tousey – the transition is so graceful and beautiful, I cried. Seconds later, I was laughing again.

The 1491’s roots are sketch comedy, and it soon becomes evident in the play. The humor is sharp, quick, and biting, but at times feels like a collection of vignettes. For me – a member of the SNL generation (my attention can be held, rapt, for 2 hours, 4 minutes at a time), this wasn’t a problem. But for those expecting a linearity to the narrative, a clear storyline from the past that would somehow make sense of the genocide on which our country was built, or admonish those of us in the audience of our role in it (Because, you know, that was a long time ago and *we* didn’t do that) – this is not the show for you. No punches are pulled here. Characters break the fourth wall repeatedly to remind us that the audience is full of white people and there was a time when America wasn’t. That those of us sitting cozily in the theater might not have directly committed genocide, but boy do we enjoy the benefits of it. 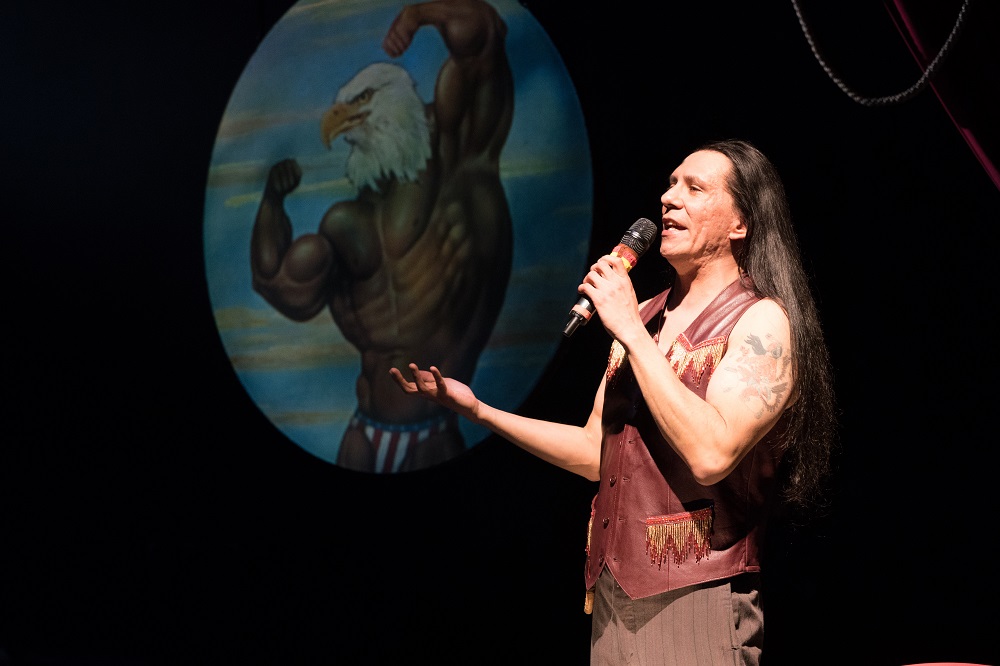 “I mean, do you even know how hard it was to cast this play,” the narrator (played effortlessly by Justin Gauthier, who shrugs his way through his lines as though chatting to friends) asks the audience, illustrating how complete the eradication of Native Americans has been. “One of the Indians is a Chinese guy.”

“Actually, Korean, but WHATEVER,” actor James Ryen (who is riotous and incidentally mostly shirtless in this show) claps back.

No spoilers here, but after even after singing sadistic priests and video game fight scenes and illuminated penises and a drugged out hippie wedding (that is a season highlight), the conclusion to Between Two Knees still looms large as a bit of deus ex machina absurdity. It’s nevertheless hilarious, deeply satisfying, and the only note on which this show could have concluded. Because for this narrative of Native American genocide to have a happy ending, you have delve deep into the realm of absurdity. And if you have a problem with that, don’t take it up with the show. Take it up with history.

More info on Between Two Knees at The Oregon Shakespeare Festival, Ashland Oregon: