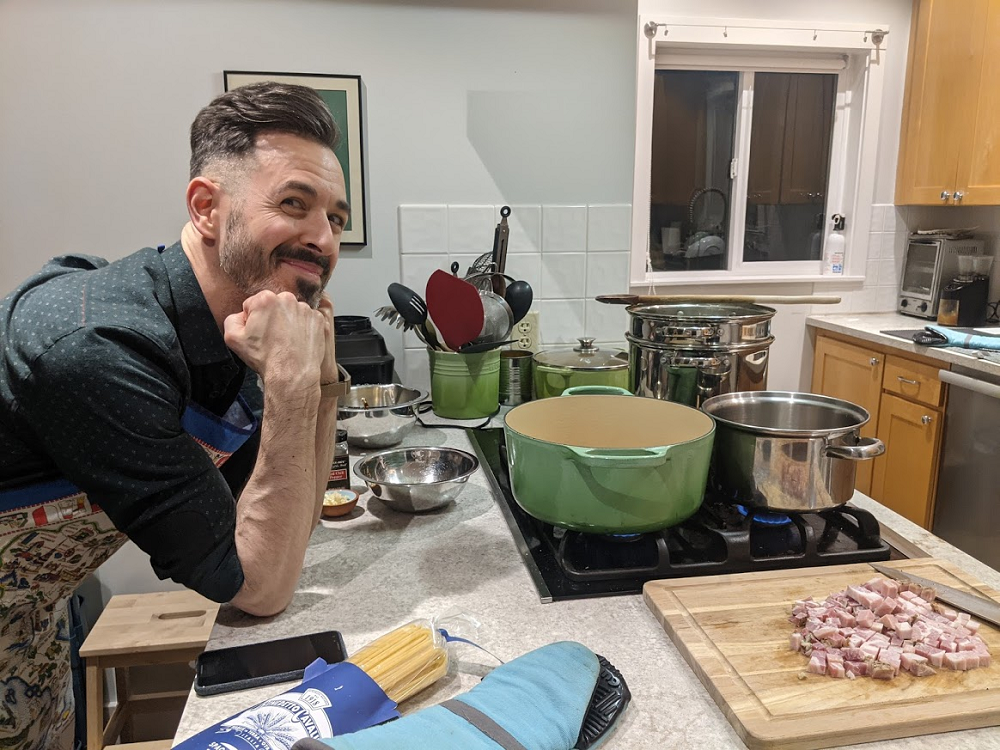 Look, I am going to confess something, and as I do, please, please, please do not hurl anything heavy, because odds are, due to the pandemic and the ubiquity of the internet, we will not be in the same room, and it will not hit me. You’re just going to destroy your own computer or possibly damage something in your house, rather than hurt me.

Or maybe have at it, I’m not your mother.

Rand’s pandemic hobby has been cooking.

PUT THAT SHOE DOWN, WE DO NOT THROW THINGS. 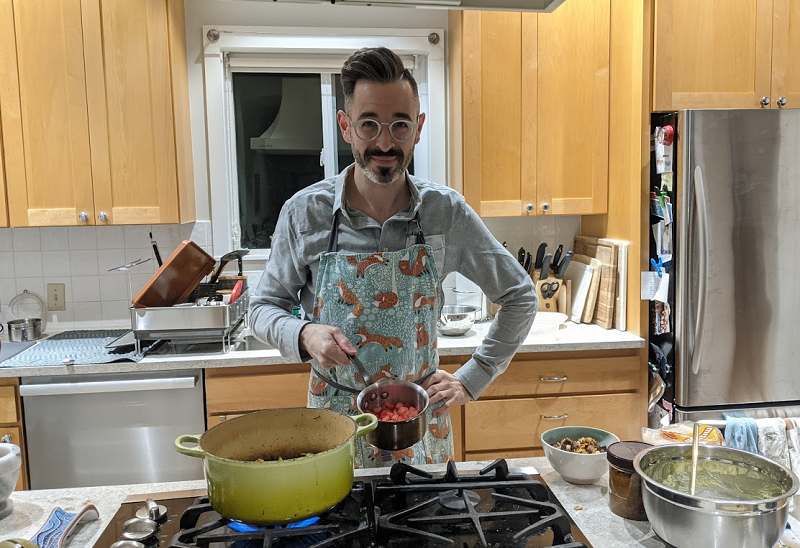 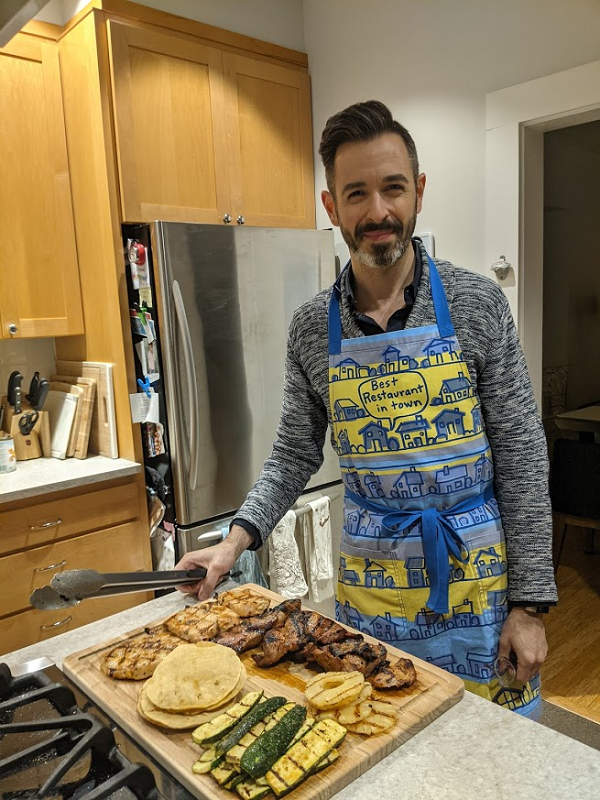 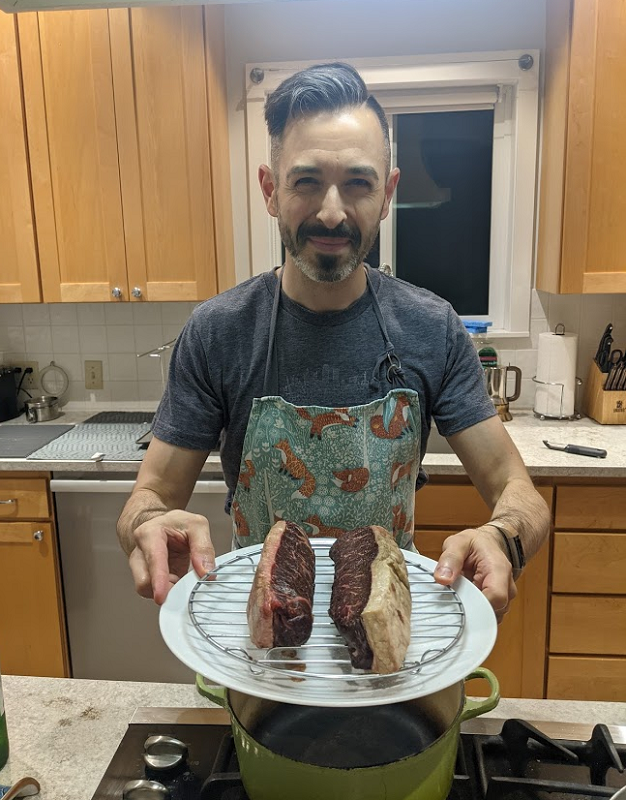 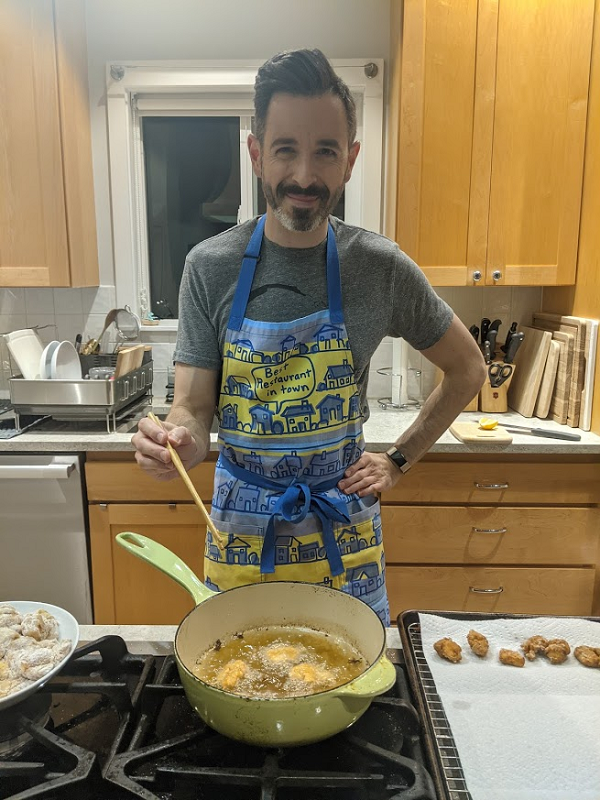 Look, I know, I know. This is the last thing that you need to hear about childless couple who normally travels but is now stuck in their home for a year. Ideally, you would like to be reading about how one of us snapped and cannibalized the other, or that we’re at least starting to grate on one another’s nerves. And while we occasionally had moments like that (sometimes the cannibalization and the nerve-grating happened simultaneously as evidenced by the photo below) for the most part we just sort of … got along. 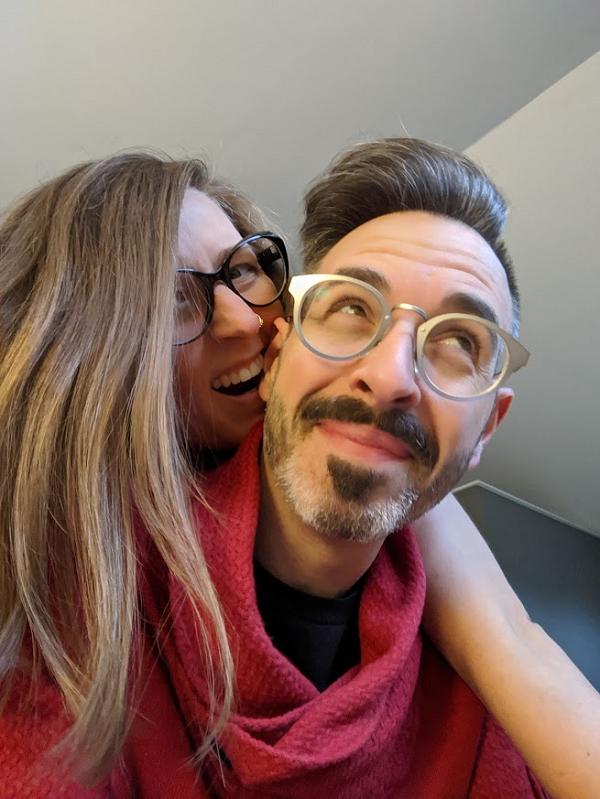 Look, we had the occasional fight, we occasionally had to go for a walk because the other was just “a lot right now”, but for the most part, things were okay, and I think a big part of that had to do, I am realizing now, with my husband making sure I was regularly fed and hydrated.

So maybe his pandemic hobby was neutralizing the fine middle-aged cannibal in the house. I still think it was a win-win. In the before times, dinner parties were our thing, that obnoxious pastime of people in their late 30s and beyond, bottles of wine and trays of charcuterie, mains and passed sides, me bringing out dessert and him pulling out bottles of scotch. It felt effortless and second-nature, was what we did, having people over and cooking for them, or going out to a restaurant with friends. At the start of a given week Rand would remind me of who we had dinner with in the days to come. Inevitably we’d have plans for at least four or five of the nights, more if we were on the road.

There was a novelty, early in the pandemic when it was just the two of the us (“We are eating in front of the TV!” “We are cooking just for ourselves!” “Our President is actively trying to kill us all!”), and we leaned into it because everything else was just too sad and scary to consider. After a while, Rand needed bigger challenges, and he started delving into new recipes. We watched Midnight Diner, a relaxing and hard-to-classify show that takes place in, obviously, a diner, a small one in Tokyo. He missed travel, he became wistful about our trip to Japan. He bought himself a donabe pot and temporarily lost his mind. 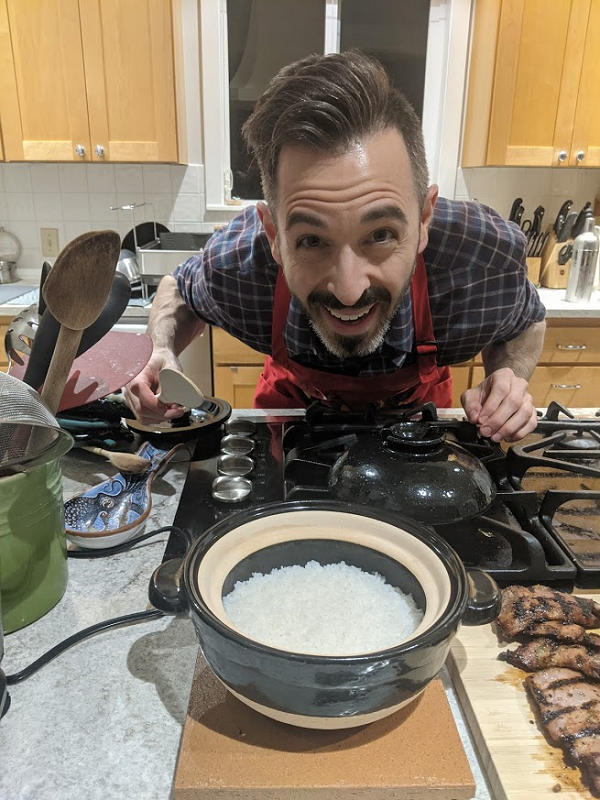 This was not the end of it. It rarely is with Rand. In the words of that fallen star, he’s always got to be starting something. He will roll out fresh pasta like he learned to do in Bologna. 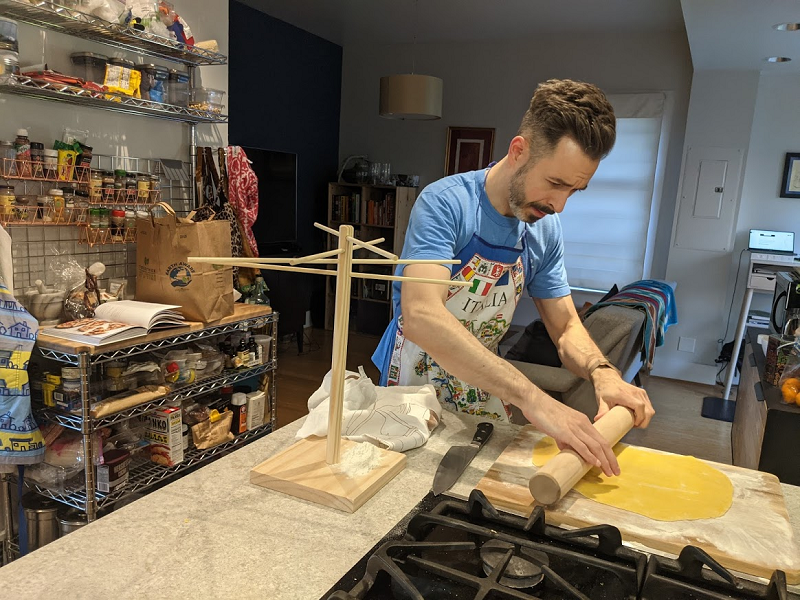 At least once a month he will roast giant marrow bones and make a pot of stock, tossing in an entire chicken. He uses it to make risotto, and when his grandfather was fully vaccinated we had him over to help. 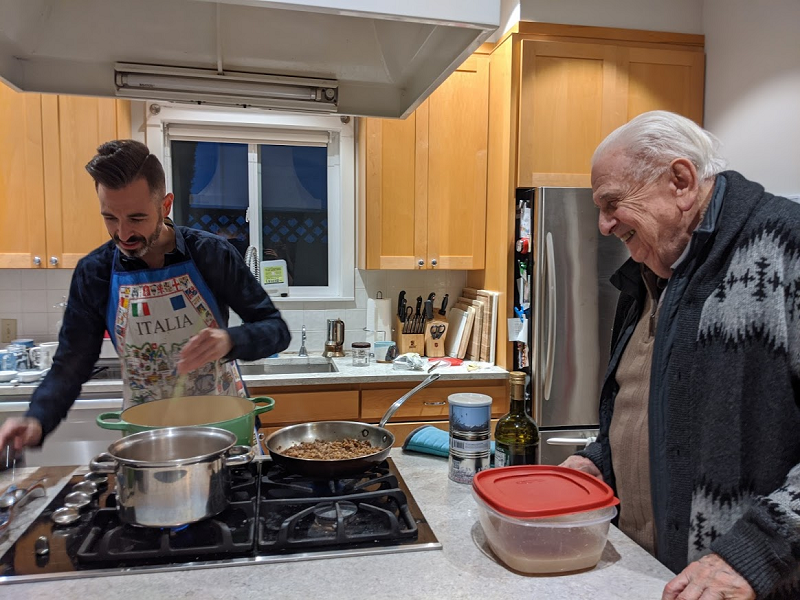 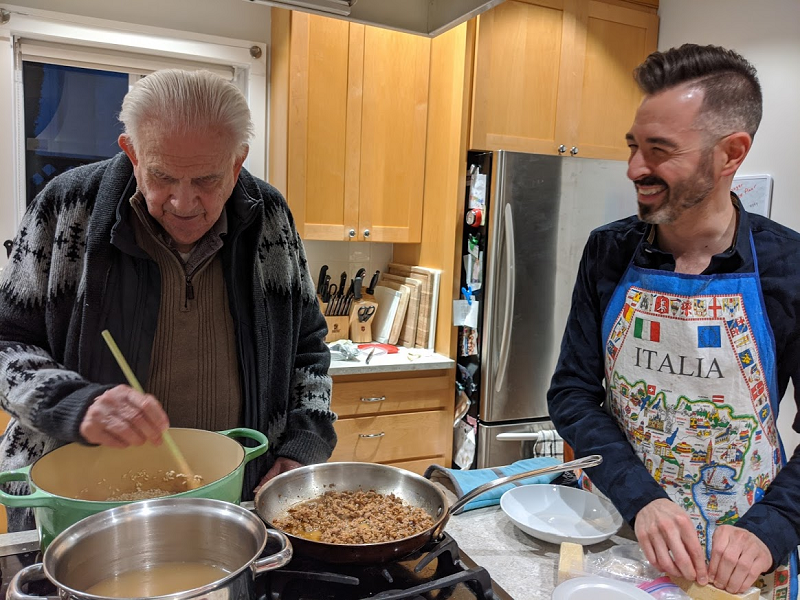 He makes me steaks and soups and pastas. He garnishes and composes and fries and braises and grills and simmers. 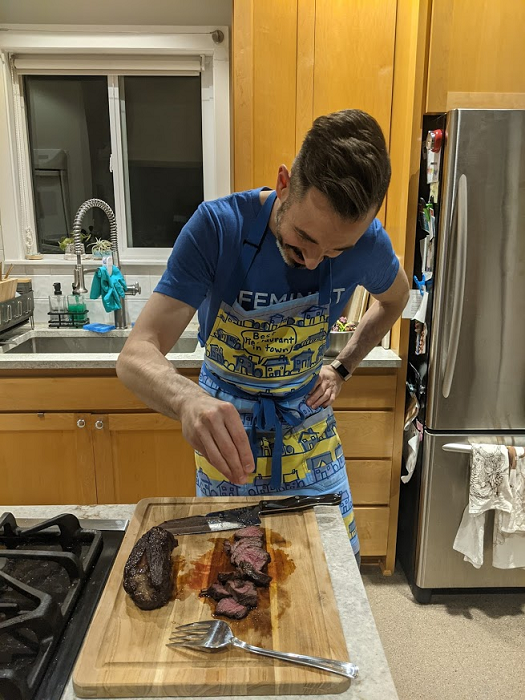 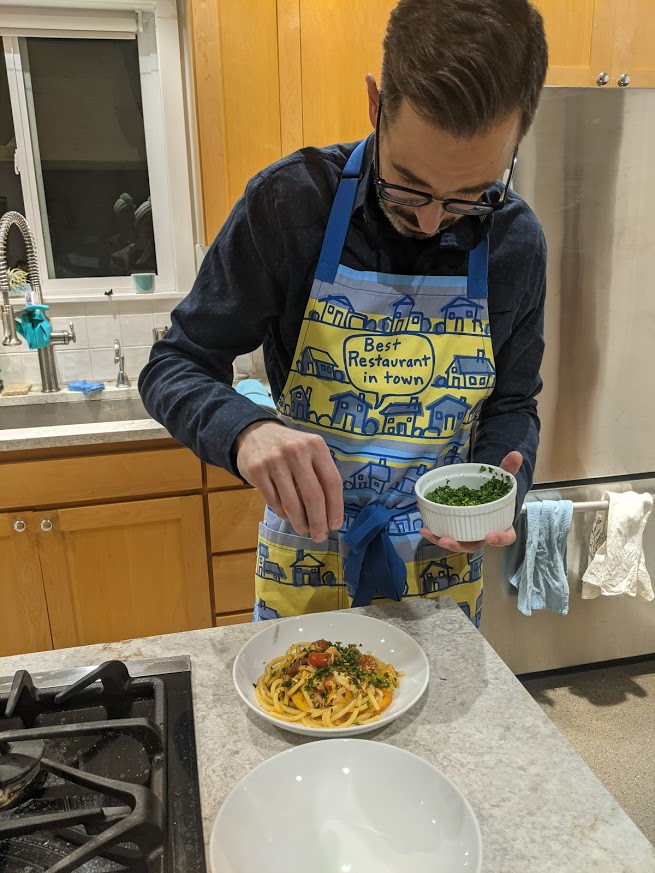 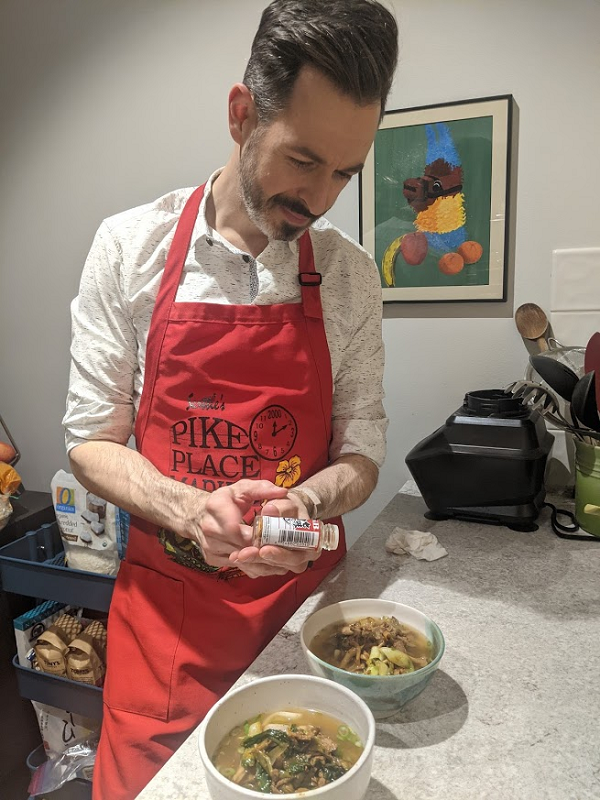 I have spent years writing about our travels, felt like our lives were an open book, hell, even wrote the damn book, but I’ve been tweeting out these photos, and it’s felt like opening people up to our home. The responses are occasionally overly-scrutinizing (people seem obsessed about the quantity of food that we cook, which feels inappropriate at best), but for the most part, lovely.

Keep posting your dude cooking. It’s my favorite activity and your evangelizing is helping to normalize it. Dual knife blocks is a nice touch.

I love his aprons!

Need that in my belly STAT

Still, when online abusers are particularly active in my thread, they attack my husband’s masculinity specifically because he cooks for me. 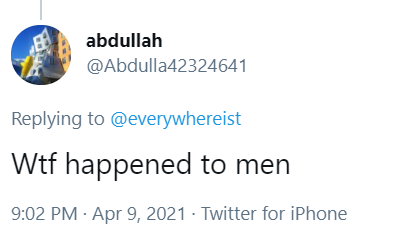 They tell me to enjoy it, because he’s going to inevitably leave me (for a man, because they need to add homophobia to it).

Man this long con of his is loooooooong. pic.twitter.com/TpCZH2OeVD

“Why are they so invested in you leaving me?” I ask.

“Because if you are loved and happy, what does that say about their lives?”

There is something else, too. Something less personal. Professional chefs are often male. As a society, we’re comfortable with men cooking in that context – doing so as a job, in command of a restaurant. But a man cooking at home is occupying a space that we often expect women to – one of a caretaker. He is taking on invisible labor that we are used to dismissing. And in doing so, forcing misogynists into an uncomfortable reckoning: domestic work is important, valuable, and hard.

I tell him I can cook, or that we can get take-out, and sometimes he takes me up on the offer. I occasionally make dessert. If I’m quick enough, I can get the dishes done before he has a chance. 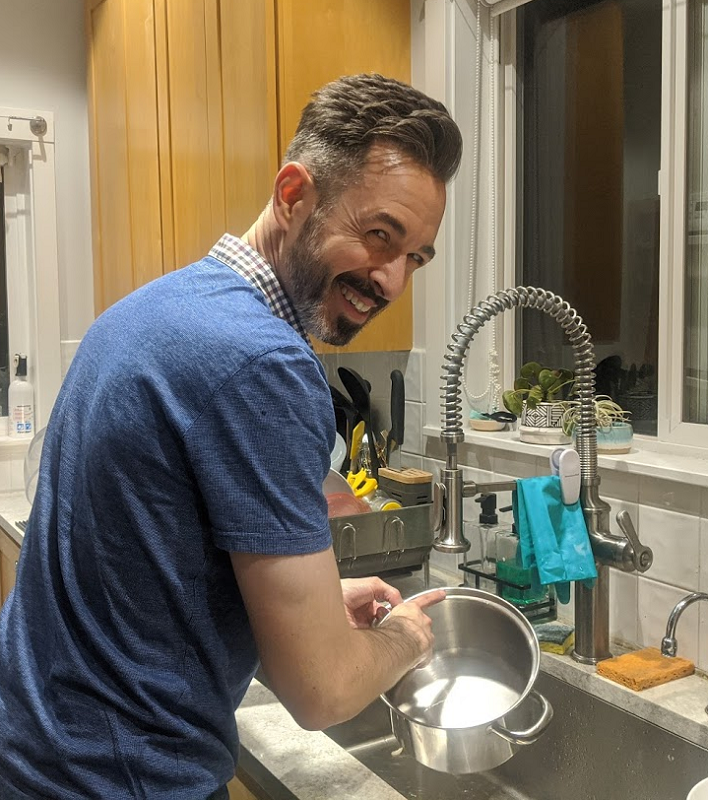 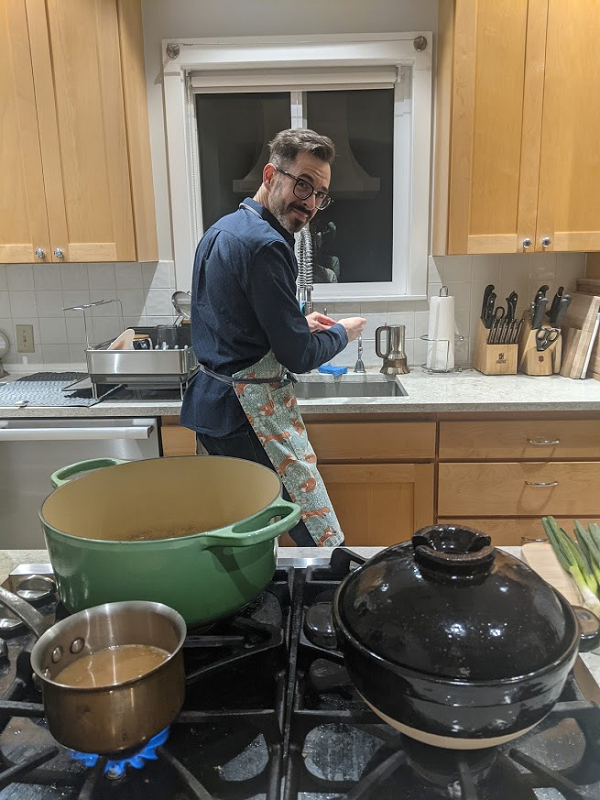 “Still – think how devastated I’d be if you left. I wouldn’t see it coming,” I say.

“Neither of us would.”

“No one was more surprised than us!”

I tease him that the worst part would be that I’d have to cook for myself, and he tells me that he could still come over and cook for me.

“And we could still make out?”

Maybe, I suggest tentatively, it would be best if he didn’t leave me in the first place. And he agrees that maybe that’s the best way to go. I mean, think about how brilliant and devastating this ruse will be if it goes on for another fifty years and then it ends. 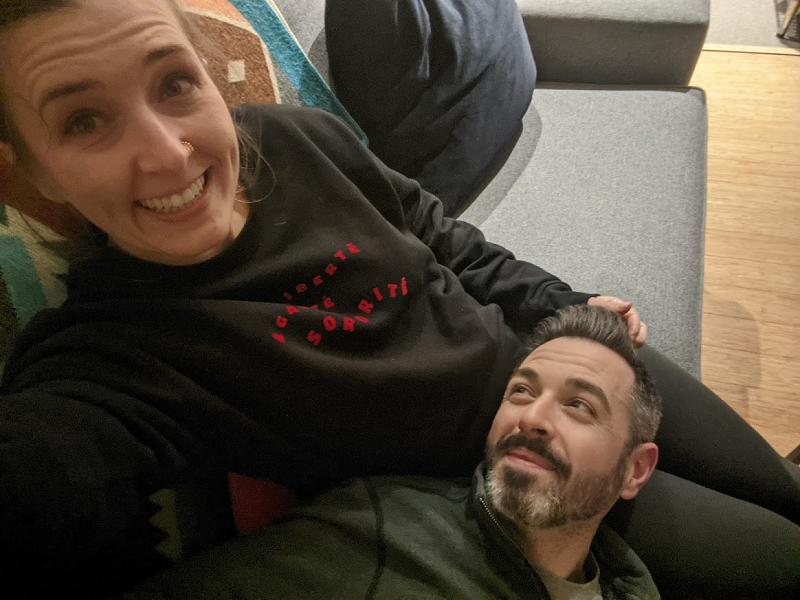 Food, Life at Home, Lockdown, Nothing to Do With Travel