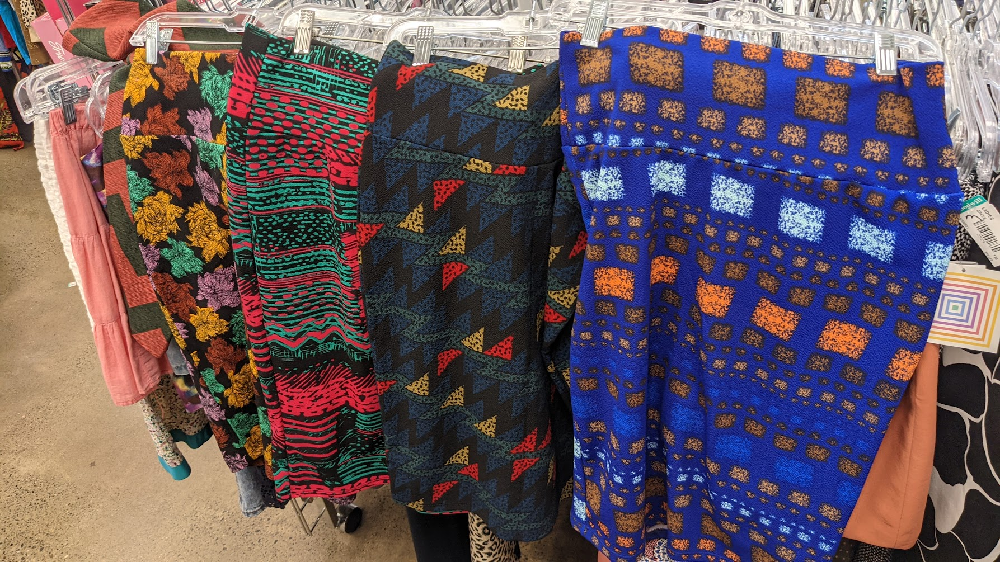 I am an avid thrift shopper; I have been for years. As a kid, we went out of necessity, and I lived in fear that my classmates might figure it out. One girl (popular, perfect, so, so pretty) seemed to have it out for me – she’d interrogate me about my clothes, one time forcefully pulling the back of my shirt to examine a tag. She thankfully could glean nothing from it, but it was too much a risk for me. I needed to come clean, on my own terms, before someone else outed me.

So I leaned into it. I wore polyester shirts from the 70s, wool mini skirts from the 60s, things that had obviously belonged to someone else. I don’t have many photos from this time, because we weren’t great at documenting my life, and besides, my mother’s house caught fire a few years back, anyway. But here is a grainy picture from a yearbook, and there I am, second from left, like a grunge version of Cher from Clueless, smiling in knee-high socks and a midriff. Defiant, and scared out of my mind, and thank god, failing miserably to blend in. 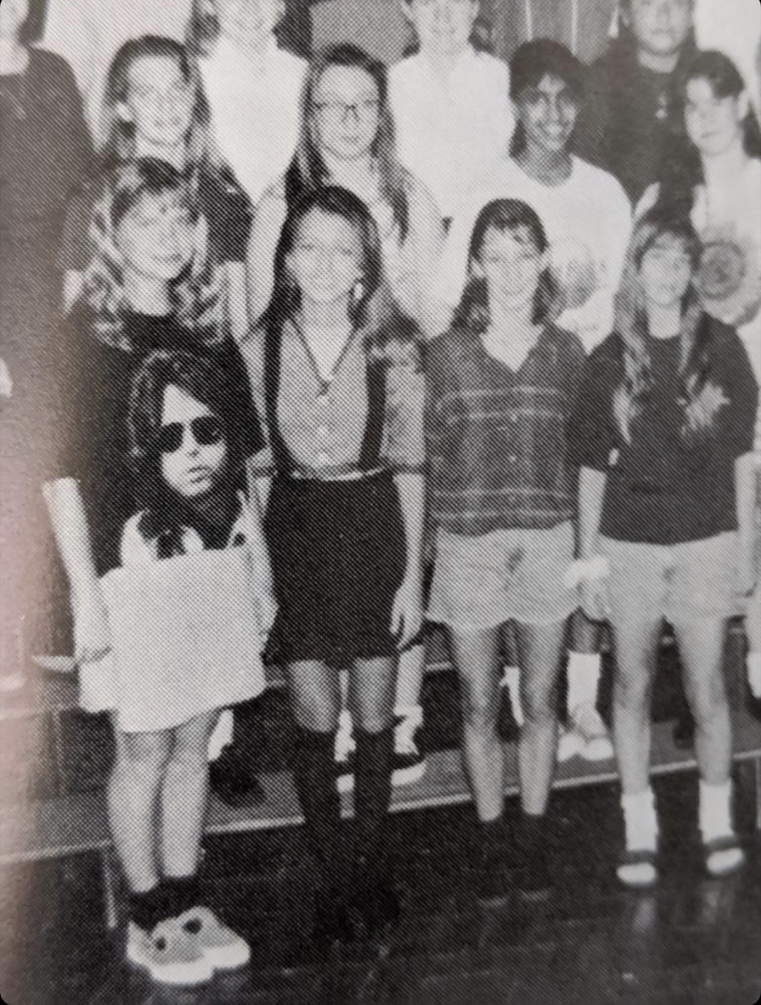 Me, front row, second from left. I haven’t dressed better, before or since. I wish I could tell her that.

I can’t really describe to you the soft spot I feel for that person I was, the way I want to hug her, the way I can almost feel her, so tiny and gangly limbed, clomping around on chunky heels like a newborn gazelle. I don’t know if I still go to the thrift store to honor her, because that sounds absolutely crazy – she’s thirteen, she’s long-gone, she’s a ghost. 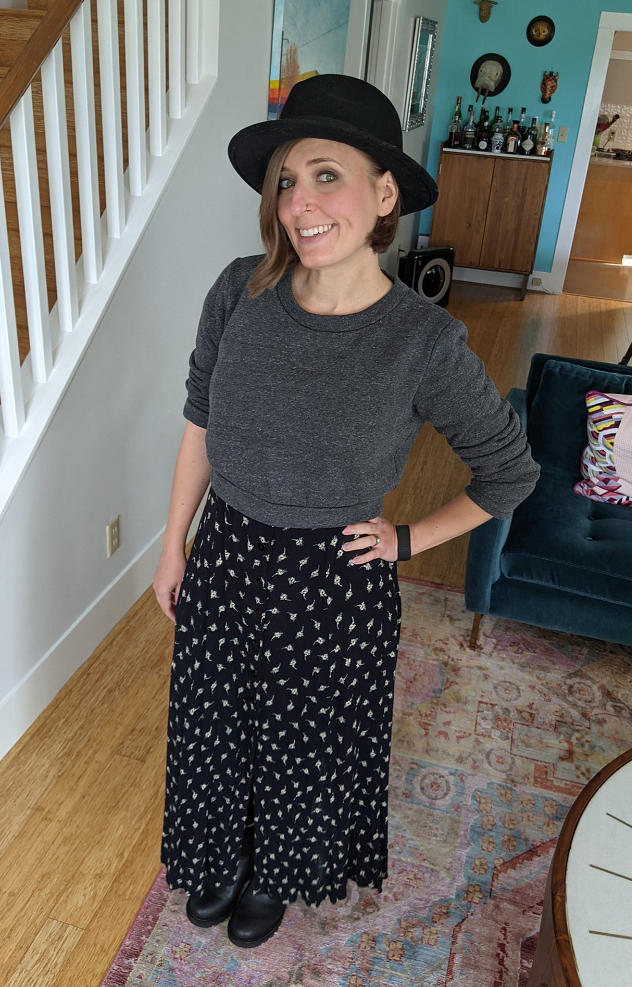 I want to tell her that it’s all going to be okay. And that even now, her clothes used to belong to someone else.

Maybe I go simply because it’s fun. Maybe 28 impossible years later, it’s still an act of defiance. I pick through other people’s cast-offs. I look up the original prices of things, and gleefully tell Rand.

“Look,” I tell him. “Look how much this jacket would have cost me if I’d purchased it new.” As though I am doing something grand for our family. As though I am providing. And he smiles, because what else can you do when someone you love is being so, so weird? You just smile and let them do it and tell them how amazing it is that they got J Crew pants for $6, even though you are now at a point in your life where you can shop at J Crew for real. Jesus Christ, you can buy so many things at J Crew.

But instead, I go to the thrift store. I have systems, I have rules. When I get home, anything I’ve bought goes straight into the wash, including me. It’s fucking great as long as you don’t mind a little cat hair and days when everything inexplicably smells like cheeseburgers and feet.

But lately, something weird has been going on. 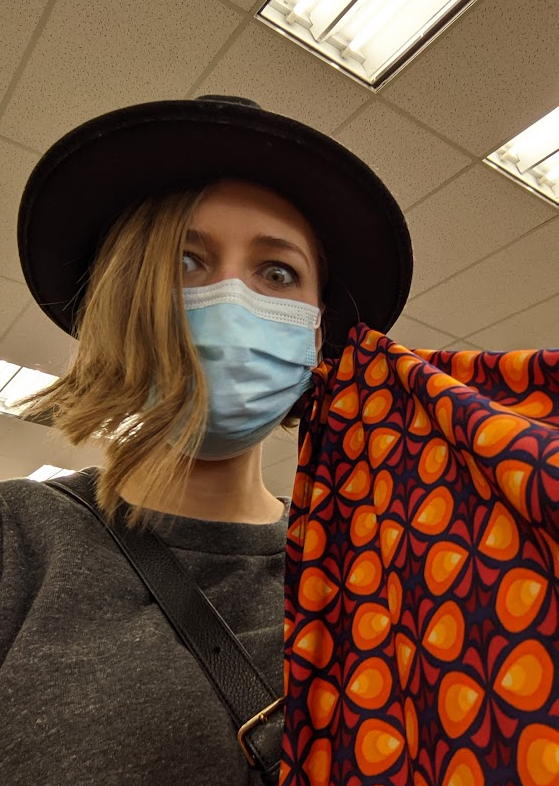 Me, trying to comprehend this print.

I’ve seen terrifying and bizarre things at the thrift store over the years. I double check trousers before trying them on, because sometimes people give them away without washing them and they don’t wear underwear and I’ll let you just imagine. I’ve found cat barf (I hope it was cat barf) and all sorts of biohazardous things, and one time a lady shopping next to me found a bunch of tiny dried fish in the pocket of a coat (she bought the coat and slipped the fish into another jacket, and I regarded this move with horror and admiration). But these clothes I’ve seen recently are … well, they are just so outstandingly ugly. 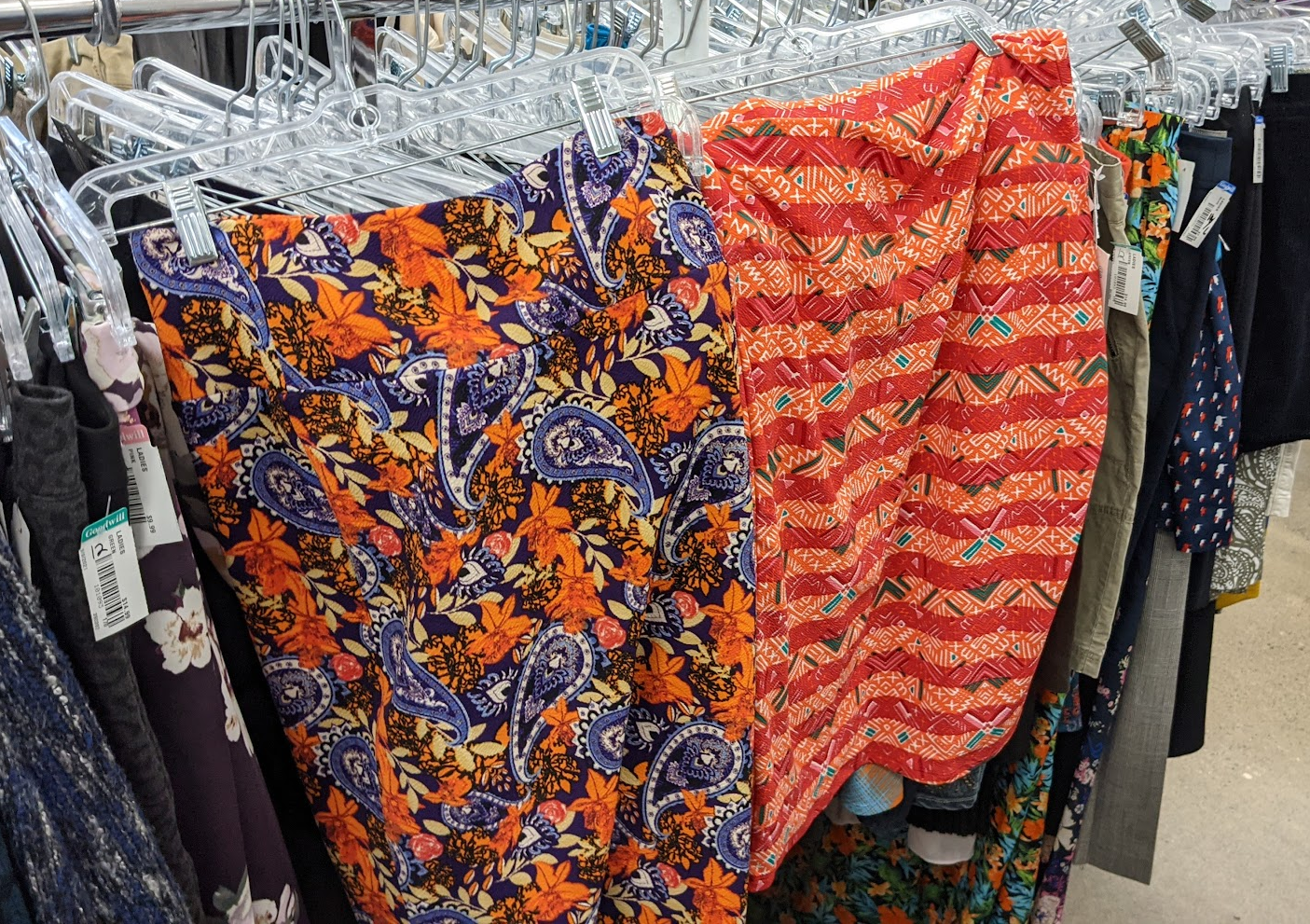 I tried to think of plausible scenarios where the patterns and colors made sense. Nothing did. Baffled, I went to go look at purses instead.

But over the last few weeks, this garish clothing has spread like a spandex pox over my local thrift store. Shirts and skirts and dresses, all so bizarrely ugly, and not a good sort of ugly, but a strange, sad, I-think-maybe-humanity-should-go-extinct kind of ugly. All made from the same weird scrunchy polyester material that makes your crotch sweat just looking at it. The labels stare back at me, LulaRoe printed on every one. 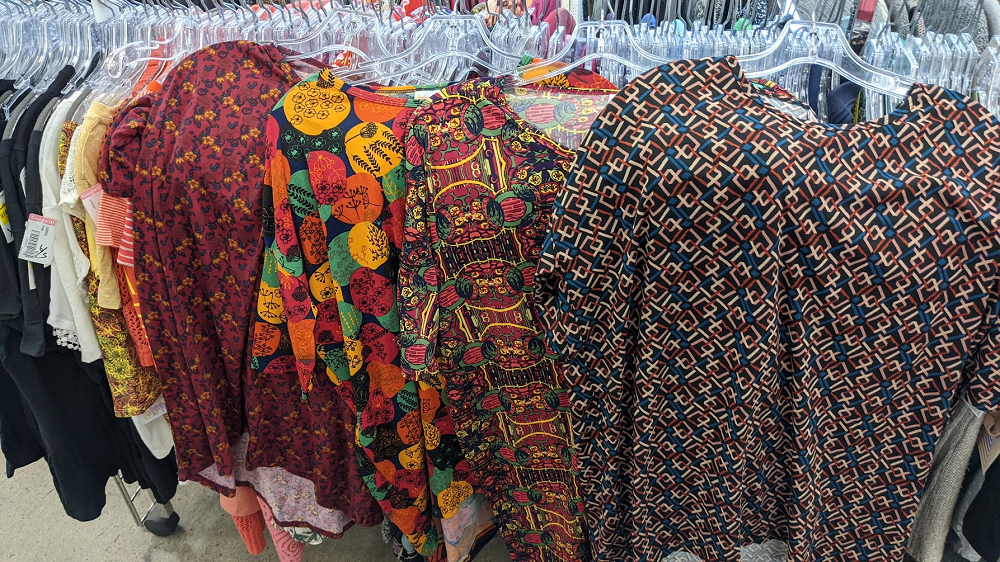 Next time someone asks me what my migraines feel like I’m showing them this picture.

If you are an American living through this panini, and inclined to watch a homegrown tirefire that is different from the one you are currently experiencing, you’ve probably already seen LulaRich, the 4-part documentary series on Prime. The series digs into the cult-like mechanics of the clothing company, and how women would get sucked into buying and selling thousands of dollars worth of the product, often incurring massive debt to do so. The ending’s not as satisfying as I’d hoped; still, you’ll laugh, you’ll grimace, you’ll be utterly confused, and that’s just while looking at the clothes. 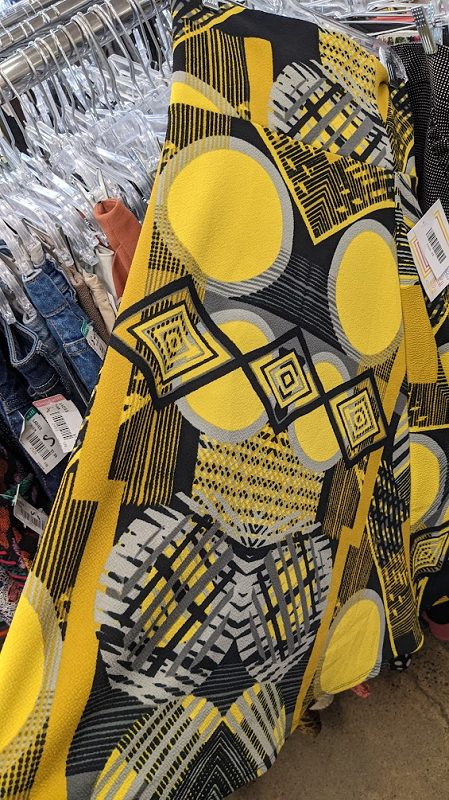 “LET’S JUST CUT AND PASTE EVERYTHING ON OUR CLIPBOARD!”

And now it seems that someone is dumping all of their unsold LulaRoe inventory at my local Goodwill. Thousands and thousands of dollars of what I am pretty sure is highly flammable clothing. Every rack was so full that I could reach in and grab handfuls of brand-new LLR clothing without even needing to look. 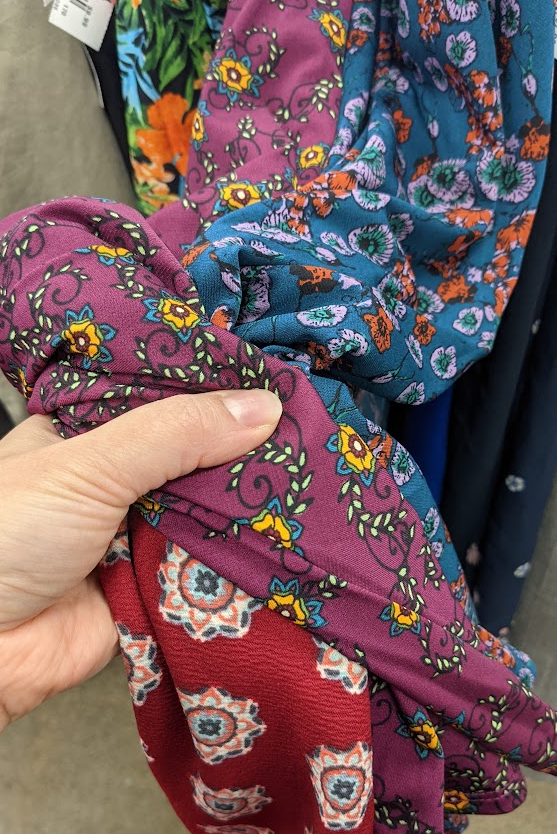 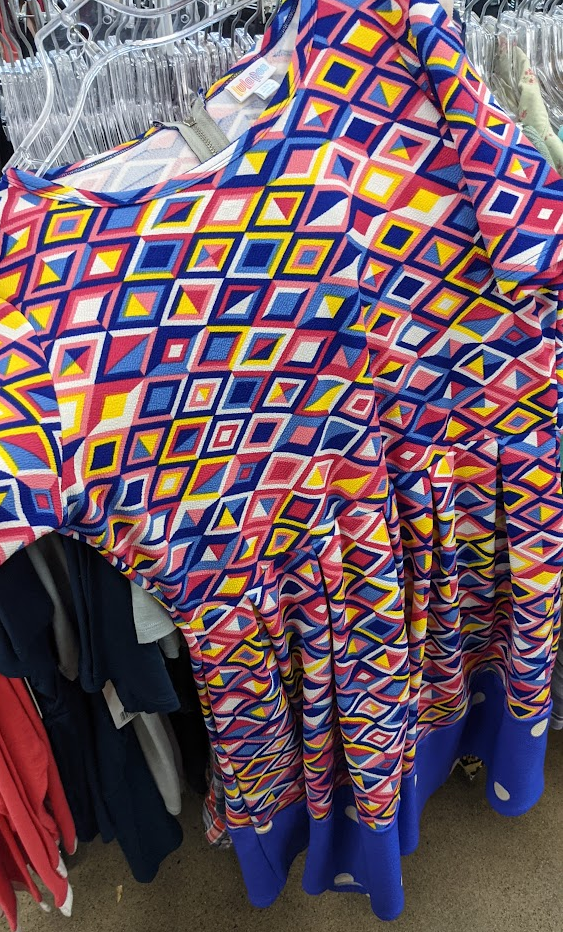 This is a dress, presumably made for an adult woman who enjoys maritime signal flags and also sweating.

I was never targeted by this particular pyramid scheme, though a few people who hated me in middle school reached out to me on Facebook and attempted to sell me smoothies designed to make you poop your way to skinniness. But it’s strange to see it all here. These awful clothes, designed to make people fit in, to make them look all the same, in the place where I’d learned to do the opposite.

I pushed pass the skirts and shirts, and kept searching for something better. Everyone else seemed to as well.