I need to tell you something. Something very important.

Are you sitting down? It’s not strictly necessary. You can stand if you want. Do you need a pen? I guess you don’t need one of those, either. This isn’t a particularly long message. Are you ready? Okay.

You don’t need to make a pumpkin pie from scratch this Thanksgiving.

Actually, you don’t need to make a pumpkin pie, ever.

Do you understand what I’m saying? Every year, the Pumpkin Lobby (note to self: maybe see if this is actually a thing) gets together and convinces the world that every single novelty food item made between September 21st and November 30th must contain pumpkin. And that’s … fine? I sort of like pumpkin! It’s sweet and spicy and tastes like you’re eating the candle section of TJ Maxx, which I am problematically okay with. But the Pumpkin Lobby got greedy. It wasn’t enough that everything you ate had to contain pumpkin, you also had to buy pumpkins and lug them into your home as whimsical fall decoration. So everyone who comes in will think that they’ve entered an autumnal fairyland and ignore the fact that a lot of the gourds look exactly like goblin genitalia. (Are pumpkins and gourds the same thing? I DON’T CARE. THEY FALL UNDER THE PUMPKIN LOBBY’S DOMINION, PROBABLY.) 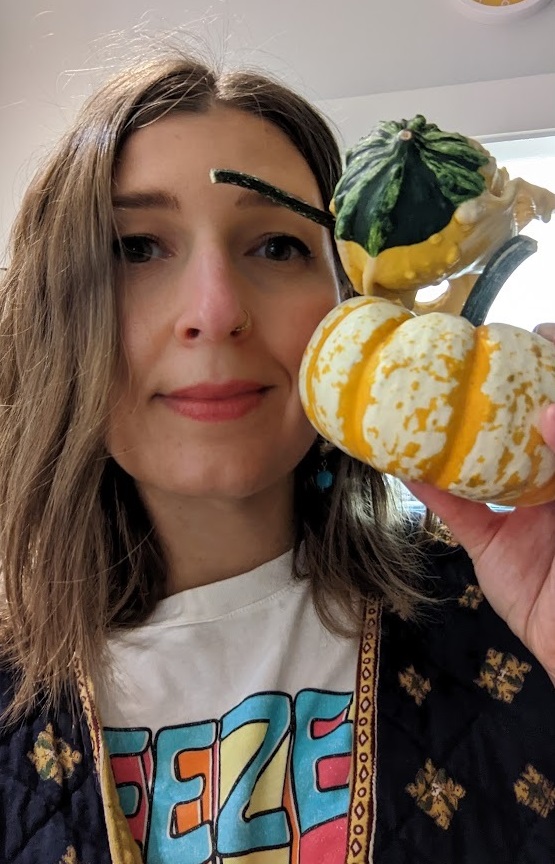 WHY AM I HOLDING THEM THAT CLOSE TO MY FACE? 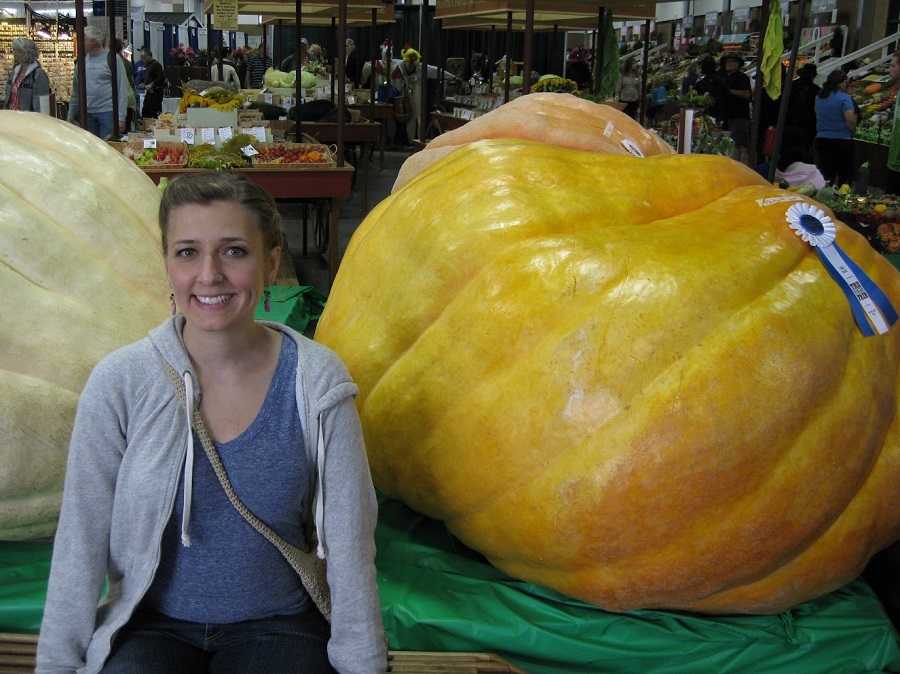 Archival photo of me, circa 2012 or so, trying not to look terrified in front of a giant pumpkin. (Pumpkin fact: they can sense fear!)

And then, because they were not done with you yet, the Pumpkin Lobby (a thing that definitely exists!) decided you HAD TO MAKE YOUR OWN PUMPKIN PIE or the holidays would be ruined. So you bought can after can of pureed pumpkin, which only serves one purpose (to those of you saying “No, it doesn’t” – stop lying to yourselves) and put it in some godforsaken shelf at the back of your kitchen, where it will remain until you move or die.

Some of you endeavored to make pumpkin pie yourselves. It took approximately fourteen hours and inexplicably dirtied every pan in your kitchen. It came out of your oven with a fissure like the San Andreas across the top of it. I say this as someone who bakes a lot: pumpkin pies are notoriously labor intensive and hard to get right. Any custard-based pie is. If you overcook it, it turns grainy and somehow watery? If you undercook it, it feels like you’re eating baby food and will make everyone just a little bit violently ill. Plus, you have to cool it for approximately 4 days because there’s nothing worse than warm pumpkin pie. You have to know precisely when to take it out of the oven, which is slightly before you think you need to take it out, and anyway, that information isn’t important because YOU DO NOT NEED TO MAKE A PUMPKIN PIE. (Don’t get me started on the crust.)

It is takes forever, and the result, I have found, is more or less just as good as when you buy it from the store.

“Oh no,” you say. “That cannot be.” You go on to tell me a beautiful story about your family pumpkin pie recipe. I nod. It is very lovely.

You also don’t need to make it. Will it be better than the store bought version of the pie? Maybe. But only slightly. Will it be worth the effort? Absolutely not. The delta between the best and worst pumpkin pie in the world is not that big, friends. I guarantee you no one, no single person on the planet, has ever said, “Oh, my favorite dessert is pumpkin pie.” That is an entirely new sentence, never uttered.

A friend of mine once took a pumpkin – the whole, round, adorable … vegetable? (Note to self: look up what pumpkins are.) He scooped out the insides, cooked it up, pureed it, mixed it with spices and eggs and cream and poured it into a homemade crust and baked it lovingly. And after it was over, after the days he spent working on it, he looked at me and said, “None of that was worth it.”

A perfectly lovely, non-pumpkin pie I made.

Listen to me. Listen carefully. I am reaching through the internet and I am taking your head in my hands. I am trying to help you and ease your burden during this hellscape holiday season. Or maybe I am just trying to help myself. Either way, this is important. The best bakers I know will make fruit pies for the holidays, and then they will go out and buy a pumpkin pie. After all, it feels traditional to have one at the table (or maybe it just feels like someone from the Pumpkin Lobby will hurl a decorative gourd at your knees if you don’t). And I suppose if you want to make one from scratch, you can. But you don’t have to. You really don’t.

You never, ever need to make a pumpkin pie

P.S. – (whisper-shouting) You don’t need to make cranberry sauce, either.