There has been a lot of talk about mental illness lately. It comes up in the wake of any major shooting to explain the assailant’s actions. They were crazy, people say. Insane. Unsound. Even when there is clear evidence to the contrary. Even when the people are competent to stand trial.

It is an approach that I hate. To use mental illness as the sole explanation for a mass shooting is a profound oversimplification that absolves us of the guilt our inaction has caused. It screams in the face of facts; it ignores empirical evidence. Most of all, it does a disservice to those for whom it supposedly speaks. Nothing stigmatizes mental illness more than branding all killers as crazy and unstoppable, and throwing up one’s hands because there’s nothing that can be done about it.

It’s not a mental health issue. At least, not exclusively (because the argument can be made that anyone who kills another human being is, in fact, crazy. And some of these shooters are not competent to stand trial). It’s also an issue of violence, of gun control, of our refusal to do anything to change a status quo where mass shootings happen more often than Nordstrom has sales.

And every time someone says, “It’s a mental health issue”, and has never, before or since, given two flying fucks about mental health, I find myself wanting to scream.

People with psychiatric disabilities are far more likely to be victims than perpetrators of violent crime. People with severe mental illnesses, schizophrenia, bipolar disorder or psychosis, are 2 ½ times more likely to be attacked, raped or mugged than the general population. (Source.)

The US Dept of Health and Human Services paints an even grimmer picture: mentally ill people are 10 times more likely to be victims of violence than the general population. The percentage of people who are mentally ill and violent is remarkably small.

And the percentage of mentally ill people committing gun crimes is actually less than that of the general population:

I know mental illness well. I know it because of my own battles with extreme anxiety. With my husband’s bouts of depression that he’s written extensively about. Through my wonderful friends who have bravely dealt about their own illnesses. (Because fuck stigma.)

And I know it because of my uncle.

He died a decade ago. Throughout my life he lived with us, along with my grandparents, starting when I was very small, in a craftsman style house in northwest Seattle. I thought it was the most beautiful one on the street. I’ve driven past it in recent years, and I still think this is true. It might just be because my memories there, of people now long gone, are happy ones. 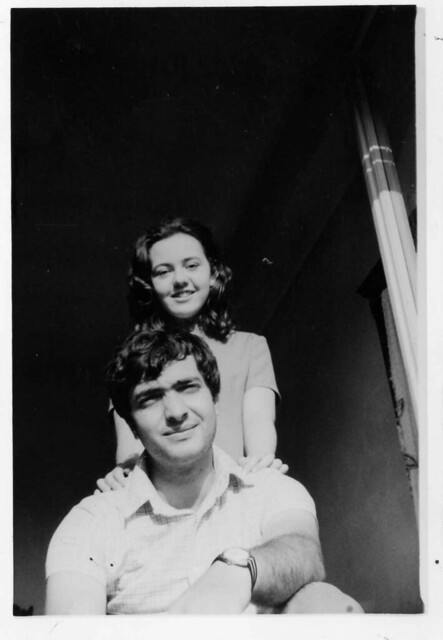 My uncle and a friend. By the time I was born, his mental illness would have progressed much further.

As the dissolution of my parents’ marriage coincided almost perfectly with my birth, my uncle helped to fill the father-shaped void in my life. He walked me to the local mini-mart and bought me candy and wind-up toys that would break almost instantly (or that never really worked at all). In my very early years, I spent countless hours with him.

He was patient and funny and endlessly doting.

I remember the day my mother pulled me aside to explain that he was sick. I must have been three or four. A narcissistic little shit with little besides self-preservation on my mind, my biggest concern was whether or not I could catch it. I didn’t want to lose my playmate and candy dealer, the only person who let me blow bubbles in the house. When my mother explained that it wasn’t contagious, I bounded back into my playroom and gave it little more thought.

Over the years, I would come to understand that my uncle’s illness was not the kind that you could treat with rest and soup. That it made him different from other people. It was the reason why he did not drive, or hold a job, or cook, or clean, or date, or ride a bicycle. He had conversations with people, but they consisted mostly of his proclamations and their bewildered responses to him. He smoked constantly, and twitched, and paced the house for hours, talking to himself or flicking his nicotine-stained fingers. Sometimes he would sit, staring at nothing, shaking with raspy laughter. If he forgot to take the bevy of medicines prescribed to him, his gestures would become more erratic as his hallucinations became more vivid.

My aunts and mother occasionally asked him about the things he saw. He once said that the wall looked like a giant pair of hands, knitting a scarf. This was one of the more innocuous visions. I heard hushed whispers of the other things – terrifying things – that entered his mind. Demons, monsters, spectres. He never burdened me with it, and I was too young to ask. Besides, I didn’t really want to know.

He occasionally thought that he was god (one episode coincided rather comically with a pair of missionaries knocking at the door; my mother just sat back and watched it unfold). One time he thought he was Caesar, another time, Napoleon. He was constantly telling me that he was telepathic, and that later he’d talk to me with his mind. When I was very small, I tried to concentrate to see if it would work. But as the years progressed, my face would burn with shame whenever he mentioned it.

We grew apart as I grew older. I was embarrassed by him. By his lack of hygiene, by his overwhelming, all-consuming insanity. There was no semblance of normal about my uncle. It took but a glance to peg him as crazy. By the time I was in high school, the opinions of my contemporaries held a disproportional amount of sway.

“Is that, like, your relative or something?” a friend once asked.

We lived under the same roof. I ignored him, offering up a quick hello whenever we crossed paths, and little else.

Towards the end of his life, after decades of smoking and anti-psychotics had taken their toll, he thought we were poisoning him. That his physical symptoms were a result of the things we had done. He yelled at my mother and my grandmother often. Once, and only once, he yelled at me from a hospital bed. Nearly blind from diabetes, barely able to walk, he told me to get out; that he knew I was behind this.

I wasn’t angry. I wasn’t even upset. Just surprised. It was the first and only time he’d ever raised his voice to me.

My uncle was many things. Intelligent, generous, kind, severely schizophrenic. He was not violent, not even when the voices in his head convinced him that we were slowly killing him. He rarely yelled. He never threw anything, never tried to hit anyone. He never even slammed a door.

He thought we were murdering him and he still loved us.

There is a difference between violence and mental illness. I know. For twenty years, starting from the time I was five years old, my mother was in a physically, verbally, and emotionally abusive relationship. Every door to every bedroom I had after that would be reduced to splinters by a man that vacillated between fun and rageful. He would trash my room, throw my possessions down the stairs, destroy things that I loved. Dishes would be broken, parts of the wall reduced to crumbled sheet rock. He would scream hideous names at us. I would try to do my homework, listening to his wrath as it spread across the house, wondering if it would come crashing through my door.

Despite this, I believed my mother when she said she fell down the stairs or walked into a wall.

He weighed more than she and I together. I lived in panic. I didn’t sleep through the night until I left for college. I spent my waking hours studying in order to secure a scholarship and on-campus housing.

I have navigated both mental illness and violence. I can tell you definitely: the two do not always go hand in hand. My mother’s partner was, by all accounts, sane. He could drive and hold a job and chaperoned me on school field trips – all things my uncle never did.

He also called me horrific names and terrified me. He carved deep gouges in my bedroom walls and in my childhood. All things my uncle never did.

Last Friday, there was another mass shooting, this time at a Planned Parenthood clinic in Colorado Springs. Once again, a bevy of temporary mental health advocates emerged from the woodwork, claiming that insanity was the problem.

None of these people work in mental health. No reports have emerged from psychiatric professionals who have evaluated him. No statements have been made about whether or not he should stand trial. But there message is clear and indisputable: he’s mentally ill. That’s the only issue at play.

Several months ago, when a white man shot up a church, killing nine black parishioners and explaining that he was doing it to take him country back, gun-rights-advocates said mental illness was the reason. Not racism. Not hate. Not violence. Not easy access to a gun.

This is a very dangerous viewpoint to have. Nearly every day, my uncle is grouped with cold-blooded killers and murderers. My mother’s ex, who exhibited characteristics far more in line with any of these shooters, is not. The NRA wants a database of people who are mentally ill (and a majority of states have created just that). But we don’t want a database of gun owners. Register your vehicle and your sick uncle, but not your weapon.

I don’t want this to turn into a second amendment debate. If you want to keep a weapon, that is, much to my chagrin, your right as an American. If you don’t want a registry, or more gun control, then say that. Say that you don’t want to give up your right, and you are willing to sacrifice the lives of innocent people in order to have it.

I don’t agree, but I’ll at least respect your honesty.

But, please, stop saying there’s nothing we can do to stop it. Stop arguing that it’s a mental health issue. Because every time you say that, it illustrates precisely how little you care for people with mental illness, and how easily you are willing to demonize them to justify your own views.