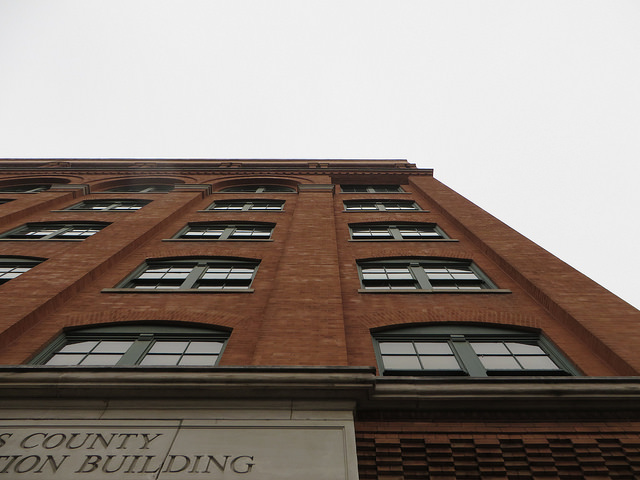 Last week I visited Dallas for the first time, and the museum that now occupies the book infamous depository where Lee Harvey Oswald worked. It is on the sixth floor of this building, situated at the awkwardly sharp intersection of Elm and Houston, that Oswald fired on JFK’s motorcade, killing the president. 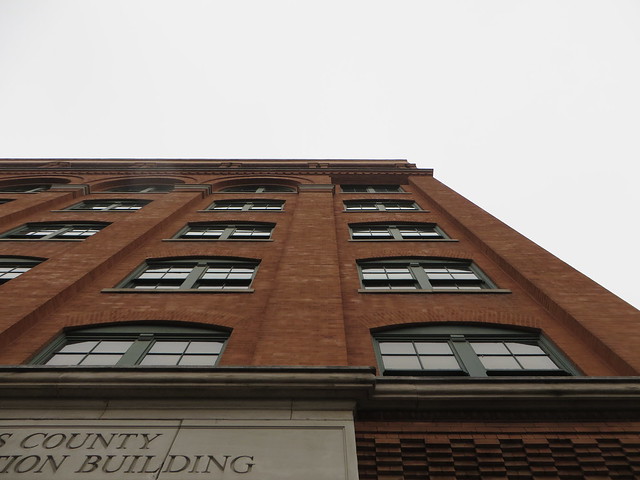 Second window from the top, on the far right, is the one through which Oswald fired.

I did not realize how close the timing of my visit aligned with this macabre anniversary. I didn’t even realize that the museum was in Dallas, to be perfectly honest. While the grainy footage of the event has been burned into my memory from countless viewings (never intentionally sought out, but still unavoidable: the President and his horrific assassination have been an inextricable part of the American zeitgeist for the last half century), I never associated it with a place. His death transcended all of that – it belonged to no specific location. Something of that much historical significance exists only in books and old photos, in shaky videos and interviews with people who remembered where they were on that dark day. It cannot be contained on a map. 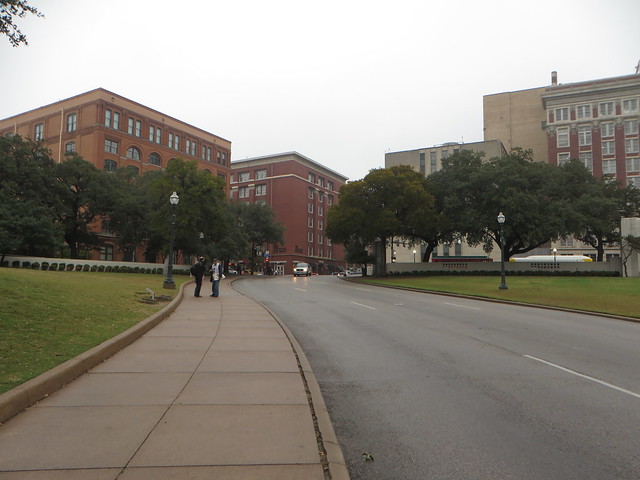 This is the street where Kennedy was shot. The Book Depository is the brick building at far left.

Everyone we’ve ever known and loved has existed on this earth. This sentiment is obvious, but it remains remarkable to me. Every historical figure we’ve ever heard about has lived and died here. Our time on earth does not always overlap with theirs, but we can walk where they did and see where their lives came to a close, sometimes abruptly and too soon. Travel is the closest we can get to the past.

He died in Dallas. I should have known this.

In my family, Kennedy had always held a place of honor and mystique; like us, he was Catholic and a Democrat. Like us, he seemed like an outsider. He was the youngest man to ever hold the office of president. I grew up in suburbia with my brother and our pretty, unmarried foreign mother. A blasphemous comparison between myself and one of the most famous Americans to have ever lived, sure. But I’d argue that feelings of kinship have grown from far less. In radically different ways, we were both out of place.

Throughout my middle and high school years, my mother would save clippings that she thought would interest me from old magazines and leave them in my room. I’d create idiosyncratic little collages – a mix of civil rights icons, political figures, and movie stars. On my wall, Jack and Bobby held court next to James Dean and Keanu.

When Rand took me to the Kennedy Library just outside of Boston, when this blog was still new and less neglected than it is now, I realized that perhaps I was not alone in my fascination with the ill-fated 35th president. The crowds at The Sixth Floor Museum on the foggy day that I visited reinforced that notion.

There are no photos allowed on the sixth floor of the eponymous museum (which, for the record, occupies the entire building). I had to go up to the seventh to snap a few pictures. I stared down at the road, at the sharp turn from Houston onto Elm. The President’s motorcade rounded this corner. 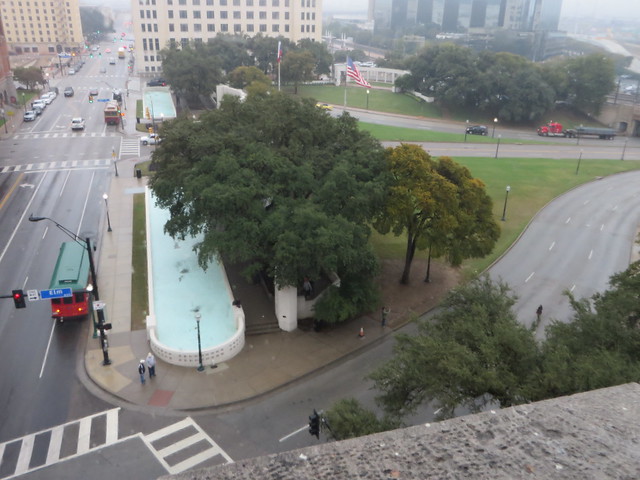 The view from the seventh floor, of the sharp turn from Houston, which runs up and down along the left side of this photo, onto Elm, which winds off to the right.

There, in the middle of Elm, two x’s are painted on to the asphalt – one purple, signifying where the first shot happened, and another one in white a little further down, denoting where the final, fatal shot struck.

Just a few feet from the end of the parade route.

The grassy knoll is there, too (it’s not visible in the photos above, but would be off to the lower right). It’s barely a hill – more just a gentle slope that rises maybe 6-7 feet. It was near here that Abraham Zapruder was standing when he took the now-infamous footage of Kennedy’s assassination. I’d always thought that it was further away from the road, but it is barely 20 or 30 feet from the curb. You have a clear view of the street from there. 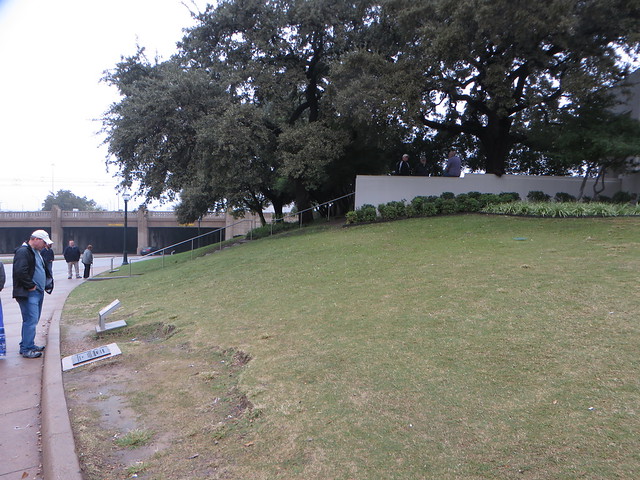 The grassy knoll, as shown from street level. I remain convinced JFK’s assassination is the main reason any of us know what a knoll actually is. 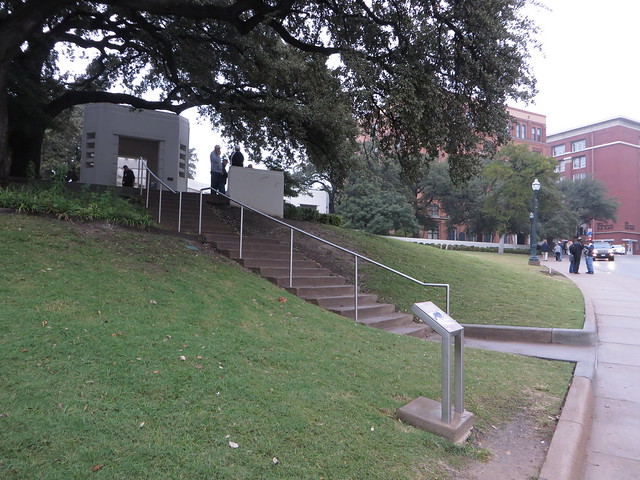 From the bottom of the grassy knoll, near the road, looking up Elm. The depository is seen in the distance, obscured by trees. 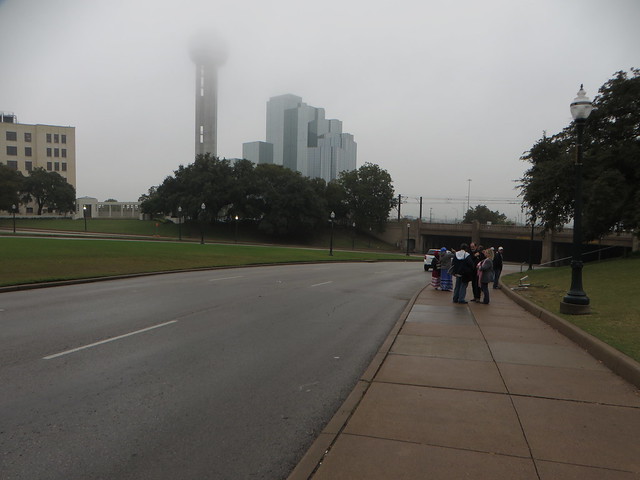 Here you can see the distance from the knoll (right) to the spot where Kennedy’s vehicle was.

One of the most famous crime scenes of the 20th century is located in a far corner of the museum, sealed off by glass walls. The exhibits wind around the space. I embarked on a self-guided tour through Kennedy’s presidency, the social and political changes that arose during his brief time in office, all of it culminating in his death.

From where I stood in time, half a century removed from the event, his demise is inevitable. There is no other ending but this one. A hundred thousand “what-ifs” will only serve to drive you mad. What if it had rained? What if Oswald had missed? What if, what if, what if?

After my visit, Rand asked me what I thought of the museum.

There are signs and quotes throughout the museum, discussing how cavalier and even reckless Kennedy was when interacting with his constituents. How he was continually setting his secret service agents on edge with his tendency to move quickly and disappear into a crowd. How he had refused the bulletproof cover that would have ultimately saved him.

The city of Dallas felt responsible. The president arrived for a visit, and would not leave alive. But like I said, his death transcended his location. It was bigger than all of that. It felt like if it hadn’t happened there, it still would have happened.

“Oh, and also? Oswald was a patsy,” I continued.

Rand stared at me as though I was joking.

“There’s no way he acted alone.”

“You went to a JFK museum and now you think there was a conspiracy?”

“I’ve always thought there was. The museum just reinforced this.”

“No. Museums are full of facts.”

“Not if they’re covering something up. Jack Ruby – who had mob connections – was hired to kill Oswald to stop him from talking. And then Ruby died a few years later from cancer. HE KNEW HE WAS NEAR THE END SO HE AGREED TO KILL OSWALD TO SHUT HIM UP BECAUSE HE HAD NOTHING TO LOSE.”

“You have lost your mind.”

I shrugged. This, of course, is part of our continuing fascination with Kennedy’s death – whether or not there were multiple shooters. Eyewitness accounts say that they heard anywhere from 2-7 shots. Supposedly Oswald fired three. People will debate until the end of time whether or not there was a conspiracy to kill the president. The museum touches on this point, but makes no conclusions.

I left with more questions than answers. It was raining when I exited the museum, the air uncomfortably warm. I stood on the grassy knoll, I stared at the x’s painted on the ground. I felt terrified. Half a century was not enough to separate me from the horror of that day. 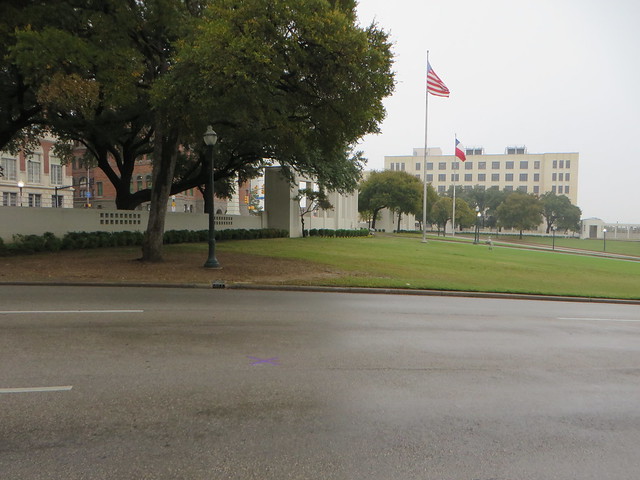 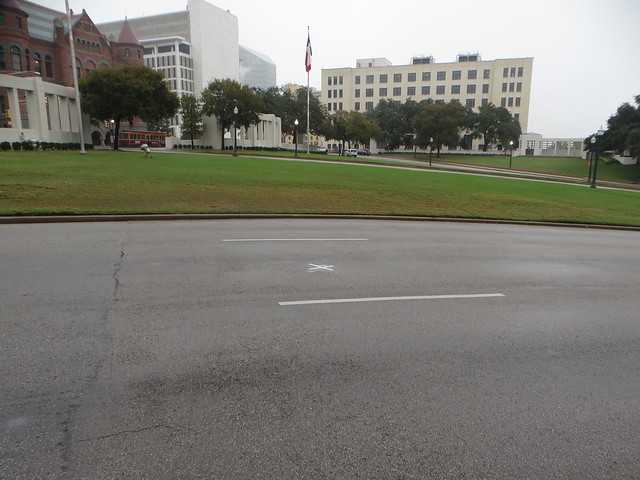 All of our history, good or bad, has happened somewhere. He died in Dallas. I saw the spot where he was fatally shot. Travel enough, and you can almost reach out and touch the past. The answers are there, just beyond your fingertips.