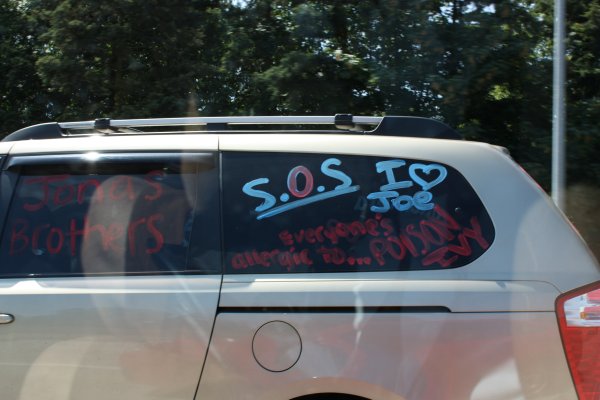 I’m convinced that the best thing about traveling anywhere are those one-of-a-kind unexpected experiences no one else has. Seeing the Hoover Dam is amazing, but seeing a cloud shaped exactly like Yoda just outside of the Hoover Dam is even better (more on that later). Getting there, it seems, really is half the crazy.

Consequently, the best part of last week’s trip to Portland? The caravan of pudgy white girls headed, en masse, to the mecca of the Tacoma dome for a “Jonas Brothers” concert. They had graffitied their cars accordingly, with weird messages like “Everyone’s allergic to Poison Ivy” (wisdom and medical advice! I’m totally writing “Gonorrhea is not a flower” on my KIA). See for yourself: There were half a dozen cars like this one, and I wish we had had the chance to take more photos, but we were on the freeway, and frankly, I didn’t want to the startle the herd and cause them to stampede or something. Rand summed the whole experience up nicely:

“What the crap did they do to their car?”