I’ve noticed how easy it is to find material for “Dick Move!” posts, and it has me slightly worried. Are people just universally dicks? Does travel bring out the worst in people? Am I hyper-sensitive because I try really hard to be nice and don’t understand why old ladies are ALWAYS TELLING ME OFF? It’s probably d.) all of the above, which is hardly comforting.

As such, this week’s Dick Move! comes courtesy of yet another gray-haired lady I managed to piss off. Rand and I arrived at the airport last week for a quick trip down to Palo Alto. We ended up in some weirdly long line (did I mention to never trust the TSA, ever?) and when we finally got through security and to the food court, we were kind of sick of it all.

Rand spotted an empty table on which someone had left their trash, which is a common move. We had started to put our bags down and clean up, when a woman came up to us from across the food court, absolutely scandalized.

“Excuse me – we have NOT finished here.”

Rand and I were dumbfounded. There was no one in sight. They clearly had not left mid-meal (the dirty plates were piled on top of one another, and there were discarded napkins on top). They had gotten up, taken all their stuff with them, and were nowhere near the table when we sat down. Yet here she was, aghast that we had assumed the table was free.

Naturally, Rand and I grabbed our stuff, and as we walked away, Rand wondered if she wasn’t bullshitting us – just pretending that the table was hers. We turned around to watch her. Perhaps sensing this, she grabbed a fork and scooped up some leftover rice and ate it (did I mention that they had piled their trash on the plate? It was really weird). At that point, I kind of believed that she actually had been sitting there (or had at least earned the table by eating someone else’s trash), but I don’t know why she couldn’t have been more polite about it.

Honestly, is it so hard to say, “I’m sorry – I know it looks like we’ve left, but we actually haven’t finished”? Or just to be slightly less of a jerk about it?

Rand and I found seats shortly afterward, but we were still kind of shocked. So I walked over and surreptitiously took the above photo of her (seriously, I was freaked that TSA was going to tackle me. Taking photos of strangers in the airport is probably not the best idea I’ve had). But, I mean, I had to document it, right? Because it was such a (wait for it …) DICK MOVE, FOOD COURT LADY! 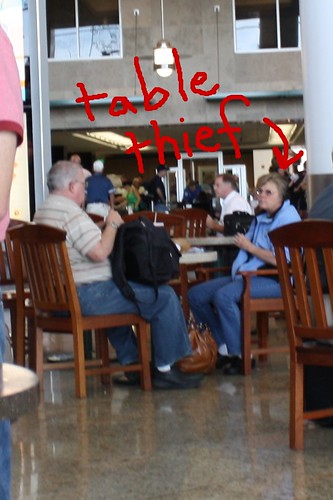 Hard to tell from this image, but I'm pretty sure they were feasting on puppies.